There’s still time for a long ride on the shortest day of the year. Mike Wigley of Peak Audax CTC organises exactly that:

We’ve been marking the shortest day of the year at Peak Audax CTC almost from the origins of Audax UK in 1974. How else would you expect long-distance cyclists to celebrate the depths of winter but with a bike ride? Riding 200km at this time of year is always going to be a challenge, so it’s a ride for the hardy and experienced cyclist. We cycle on mainly quiet Cheshire lanes but they are untreated. The current edition of the Winter Solstice has been running since 1999, and its popularity has built up over that period. On a good day we can have 80 on our start line – men and women, old and young. As it’s an Audax UK event, you follow a mandatory route visiting several ‘controls’ along the way. There are no way-marking arrows but we provide a route sheet, map, and GPX file. The weather is a lottery at this time of year. It’s usually okay but in 2010 we had just one rider, who recorded a temperature of -20ºC before abandoning. We don’t want any heroics! The event also exists as a ‘Perm’ so you can always ride it on a better day.

We start from Arthur Greenwood Community Centre in Bredbury at 8:30am prompt, after tea or coffee. The aim is to finish there for a bowl of hot soup, between 16:30 or a more leisurely 20:30. You’ll need your lights either way.

A prominent landmark at 30km is the Jodrell Bank Telescope. Call this long-distance cycling? There’s a different perspective of long distance under there!

The ride calls at Market Drayton at about 80km, just in time for a spot of lunch. There is a decent café in Morrisons, but popular alternatives are Costa, Greggs and Wetherspoon.

The Winter Solstice route avoids the hills, as befits a ride at this time of year, and fixies will not encounter too much difficulty. We pass through the pretty village of Malpas at a dizzying height of 125m.

Our second café stop is at Gatesheath, near Beeston Castle, after 133km. Cyclists are always welcomed at Old Ma’s Coffee Shop with hot drinks, cakes, and puddings with custard.

There is a short stretch of off-road cycling at Vale Royal at 156km, but it’s okay even for the skinniest of tyres. It is certainly a much prettier alternative than going through Winsford. 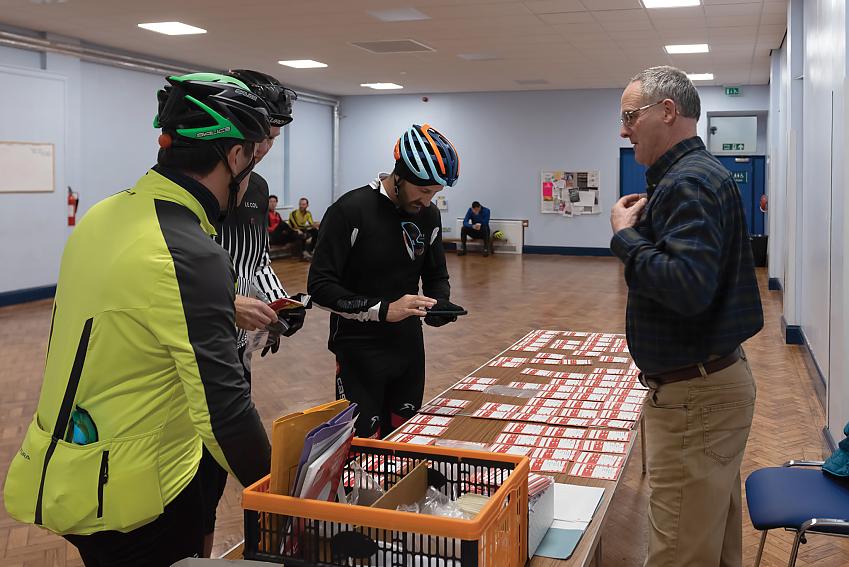 Picking up the Brevet Card

To enter details are on the Audax UK website.