Big ‘out there’ rides on little used trails where you're likely to have the place all to yourself.

Family rides in and around the Scottish capital city of Edinburgh.

The fourth stage of the trail kicks off close to the Scottish border in Kielder Forest, where you can explore a range of good off-road cycle routes before heading off again, if you desire.

Use the relatively easy forest tracks to leave Kielder Water or a couple of harder MTB trails offering superb views.

If you suffer from monophobia (fear of being alone), bring a friend, as you'll often go for miles without seeing anyone.

Exiting the forest means exiting England and the start a remote and epic journey in Scotland. You might see a few horse riders on the Cross Borders Drove Road, so remember to pass wide and slow and be nice, say hi.

The route soon joins an old disused railway line, a simple to follow route all the way to the town of Hawick, and then crosses the Pentland Hills for an impressive descent into Edinburgh. 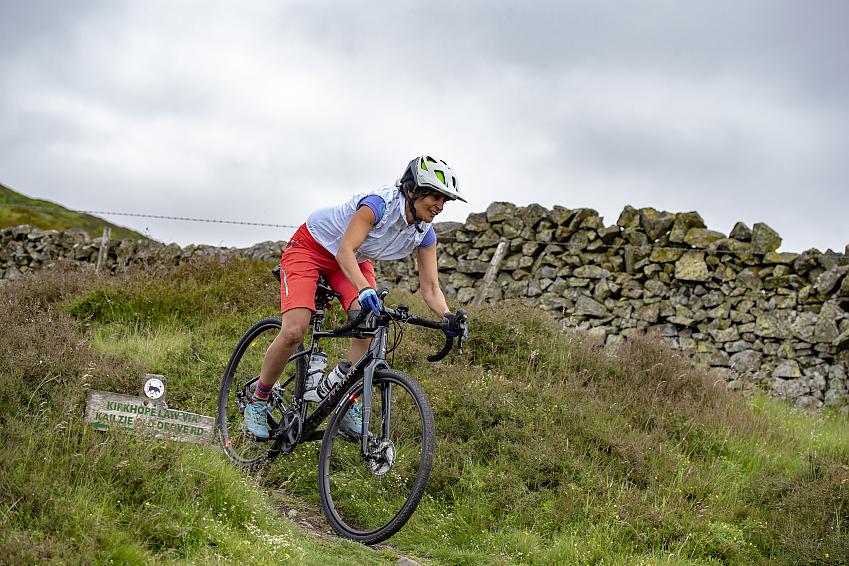 The area around Peebles provides some fun riding. Photo by Joolze Dymond

Navigating along forest tracks can be a little confusing, as new ones often appear (or old ones disappear) and all look the same, but it’s a relatively straightforward start.

Joining an old disused railway track helps, although there are a couple of small diversions.

From Hawick, the Borders Abbeys Way trail is well-signposted, although the field crossings can be hard work. So, if you want to avoid styles and narrow footbridges you will need to navigate along some back road.

After Peebles, the Cross Borders Drove Road is signed and straightforward, despite not following a marked trail through the Pentland Hills.

On the outskirts of Edinburgh, you quickly join the waterside, which guides you effortlessly either into Edinburgh, or towards Glasgow.

The following ratings use the colour-coded mountain bike trail grading system - see here for an explanation. We have added a Purple grade which refers to Red technical difficulty plus remoteness, where experience of the outdoors is required. They are intended as a guide only, to help you decide which sections are best for you.

Blue/Purple: Kielder to Hawick (or purple because the setting is reasonably remote).

Red: Hawick to Innerleithen, where the trails become harder work and hilly.

Green: beside the River Tweed to Peebles.

Rainbow of colours for the various Glentress trails just off the route.

Red: all the way to the outskirts of Edinburgh.

Green/Blue: into the city centre (or blue due to proximity to the water).