Wild and remote moorland crossings, with flora, fauna and wildlife.

A pleasant ride for the family along the old South Tynedale Railway.

A ride with historical interest, exploring off route around Hadrian’s Wall.

Wild camping and an activity holiday around Kielder Water, which offers cycling as well as other activities.

The third stage of the Great North Trail takes you on an ambitious crossing of the North Pennines, an Area of Outstanding Natural Beauty. The heather moors and peatland are home to dales, upland rivers, meadows and woodland, not to mention a vast array of wildlife.

You also come across Haltwhistle (one of two settlements claiming to be in the exact centre of Britain), remnants of the industrial past and wild, remote hillsides and forests.

Eventually, Kielder Forest Park bursts into view like an oasis, with its adventure activities, huge man-made lake and trees in their millions. 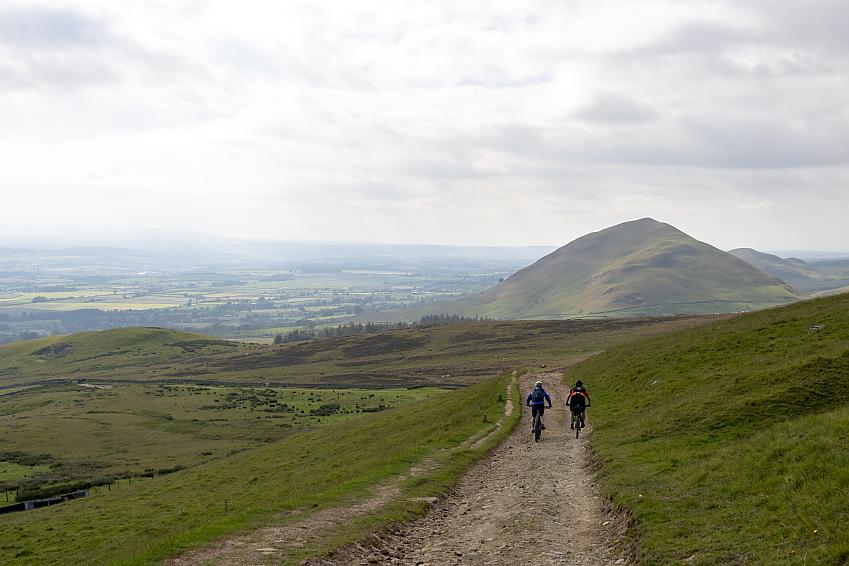 With few tracks to choose from, navigation across the North Pennines is relatively simple, although the actual track does grow faint at times on the descent from Great Dun Fell.

Following the valley and South Tyne Cycle Trail all the way to Haltwhistle is easy work again, as is the navigation beyond Haltwistle. There, you soon join the well-signed National Cycle Network (NCN) route 68 to Coldcotes before heading north-west on forest tracks until Kielder Water. The water’s edge cycle route will take you to the finish.

Blue: from Appleby-in-Westmorland to the village of Dufton, the road is gentle.

Red: the gradient increases after the village until you cross the River Tees.

Blue: after you’ve crossed the Tees.

Green: from Alston to Haltwistle, the route is along a mostly flat, well-surfaced cycle path (except for the diversion around Lambley where it joins the road – rated Blue).

Blue: Haltwistle to Hadrian’s Wall is on-road and hilly.

Green/Purple: after the wall, the riding is easy and non-technical, with little or no traffic and shallow gradients, but the relatively remote setting to Coldcotes turns it Purple.

Blue/Purple: Coldcotes to the finish at Kielder Water.