Exploring both sides of the River Stour valley, this is a ride that offers some lovely quiet and picturesque riding, along with a great refreshment stop in the gorgeous village of Chilham, half-way around the route.

This route is suitable for a gravel, touring/hybrid bike or a hardtail MTB, with quiet single-track roads, bridleways and byways. If you have skinny tyres or limited riding experience we would advise that you follow the forest roads through King’s Wood rather than the byway at the end, down to the road, as it can get pretty rough.

This is one of three routes starting from the Cycling UK EXPERIENCE hub in Wye.

Have a look at the other routes: Wye Downs and Wye woodland MTB loop. 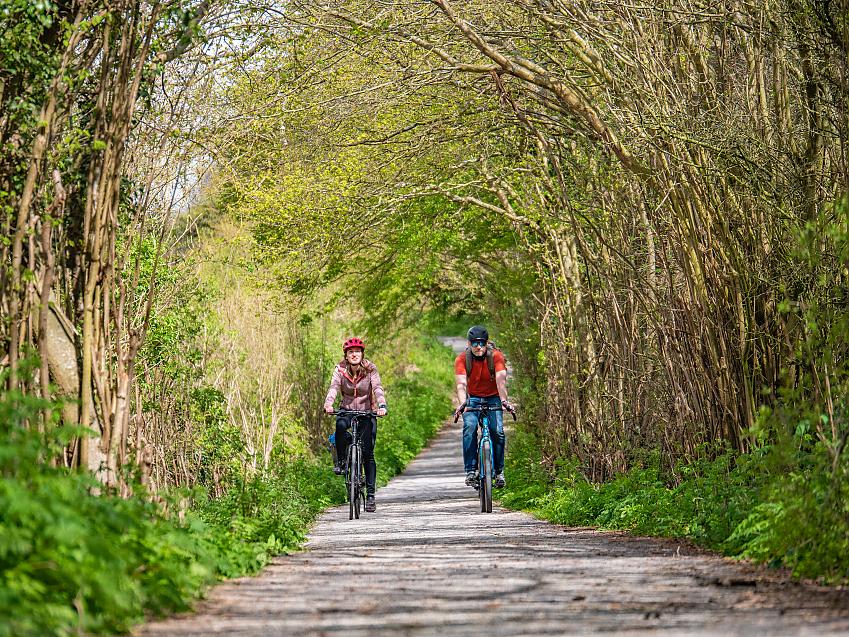 Our ride starts by heading past the well-kept church of St Gregory and St Martin to the north of the village. Until the collapse of the crossing tower in 1686, it was a large cruciform church of around twice its present size, which dates back to the 13th century and even gets a mention in the Domesday Book.

Just beyond the church, our route continues past a lovely ex-college building which is now numerous residential dwellings, and then past the school onto a bridleway and into the countryside, leaving the gentle hum of village life behind you.

After a gradual climb, you join a quiet country road heading northwards past a farm. Keep going, and you are soon rewarded with some wonderful views out across the countryside, and a well-deserved reason to stop and enjoy them. After descending through the village of Crundale, you join a section of the Stour Valley Walk, a 58-mile route through the Low Weald and North Downs.

Following this bridleway, you're lead past Eggarton Manor and back down in the valley where the route continues right, along the lower valley, off-road once more on a bridleway which runs parallel to the train line. This South-Eastern Railway (SER) branch was first opened in 1846 and remains a popular link between Ashford, Canterbury and Margate even today, trains rattling along beside as you start to gently ascend the hill.

After you peel away from the train line, you will come to a wonderful new addition built specifically for cyclists, Catha’s Seat. Created in memory of cyclist and campaigner Catherine Keegan who worked on the cycle route between Ashford and Canterbury, large solid oak wood chairs have been installed with in-built cycle parking slots to place your bicycle wheels, while you sit back and enjoy the spectacular countryside views from the seats provided. Hopefully you remembered to pack some trailside refreshments!

Continuing the gentle climb along this good track, you skirt along the woods of Broadham Down, originally a small downland farm, but which was left abandoned before the Second World War. It became overgrown by scrub until work started in the late 20th century to convert much of it back to downland grassland, which has resulted in attracting orchids and rare insects to return to the area.

The journey now descends back to the valley floor, down the track via Stile farm which can feel a little wild itself when the grass has grown up and hedges grown in. Alternatively, you can continue along the byway a little further along the hillside until you meet a tarmac road, and turn left to descend this, the two options re-joining and passing over the River Stour and level-crossing.

The River Stour, also known as the Kentish Stour is the second longest river in Kent, rising from springs at the foot of the Greensand ridge in Lenham and flowing around 57 miles all the way to the North Sea at Pegwell Bay, near Sandwich.

You follow a short section of the river beside the busy A28 road, before climbing up to the main destination of this ride: the wonderful and historic little village of Chilham. 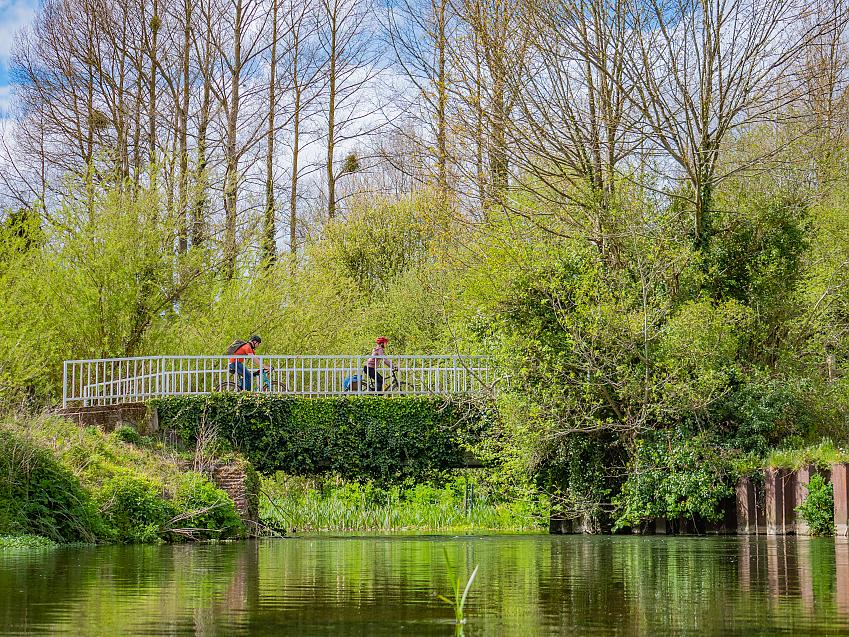 This quaint village provides a delightful stop along your journey, with a variety of refreshments in the idyllic and quintessential medieval square. It’s clear to see why this village often gets chosen for filming - the likes of Miss Marple, Poirot and Jane Austen’s Emma being shot here.

Immediately off the square are some large gates leading to Chilham Castle. Now a private house on the site of an ancient castle (of which only the Keep remains), it was originally built in 1616 by Sir Dudley Digges. The house has received various additions and developments over time, such as the creation of a lake and woodland, whose trees were planted using the help of a young elephant brought from Sri Lanka! Having been lovingly restored by its current owners, events are hosted here such as horse trials, open-air performances and open garden days (on Tuesdays in the summer months).

The pretty church of St Mary is located just off the square, and was also mentioned in the Domesday Book of 1086, but has a history going back perhaps as far as the seventh century. There are a choice of refreshments in the village, from a light-bite or afternoon tea at the delicious Shelly’s Tea Rooms in the village centre, or for something more substantial, the White Horse Inn offers some classic English pub meals with local ales and cider too. Another option still, if you are looking for a special treat, is the excellent 16th Century Woolpack Hotel. This may be over 600 years old, but they offer some very tempting modern cuisine that may persuade the more gourmet rider off their bicycle. 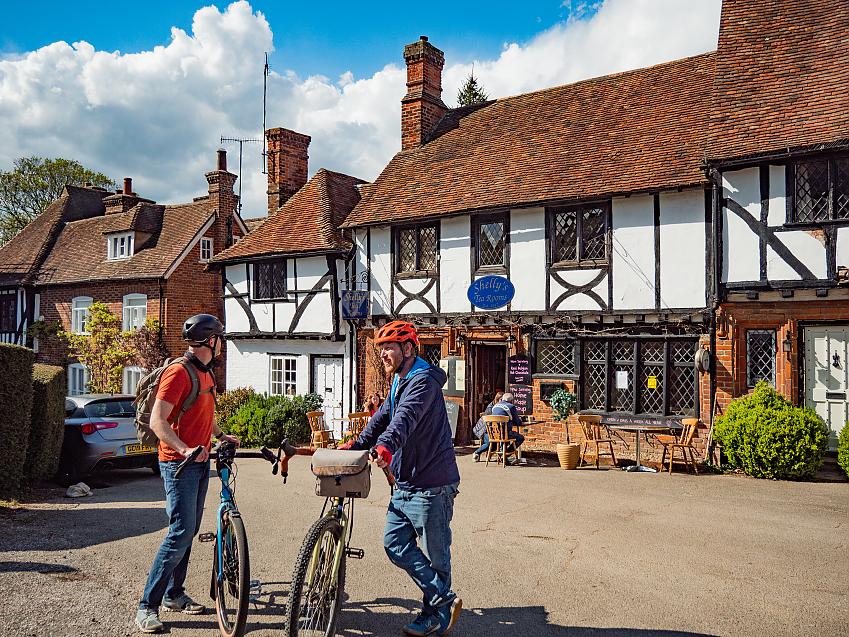 After eventually prizing yourself away from the village of Chilham, the quiet, tarmac track will lead you out around the long garden walls of Chilham Castle. Some well-placed gates along the way enable you to have a good peer into the impressive and well-kept grounds, so keep your eyes peeled.

Although this road is named Mountain Street, be assured the ascent is gradual – until you turn off it and join the North Downs Way National Trail. This off-road track heads steeply uphill where the rutted track and loose surface may result in some walking, but it soon levels out and improves.

This long-distance path was first opened in 1978, and runs from Farnham to Dover, along the Surrey Hills and Kent Downs AONB, and was a popular pilgrim route to Canterbury. Much of it is now designated as a footpath, but in 2019 Cycling UK worked with the National Trails manager and the British Horse Society to create a fully rideable version.

Now following a rugged byway track through the 1,500-acre forest of King’s Wood, it is a joy to pass through the quite woodlands with a mixture of conifer and broadleaf trees, and in spring, a stunning carpet of bluebells. There’s lots of evidence of sweet chestnut coppicing, an act of cutting the tree to a stump, called a coppice stool, which stimulates growth of several new shoots in the following spring. These can be left to grow until they reach the desired size and thickness before being harvested. Historical records from Canterbury Cathedral show that there were large areas of coppice grown in Kent by 1200 and the chestnut coppice industry expanded rapidly during the 19th Century to meet a growing demand for hop poles from the brewing industry. Sweet chestnut coppice is grown on a 30-year cycle and because coppiced trees already have a well-developed root system, they readily regrow. 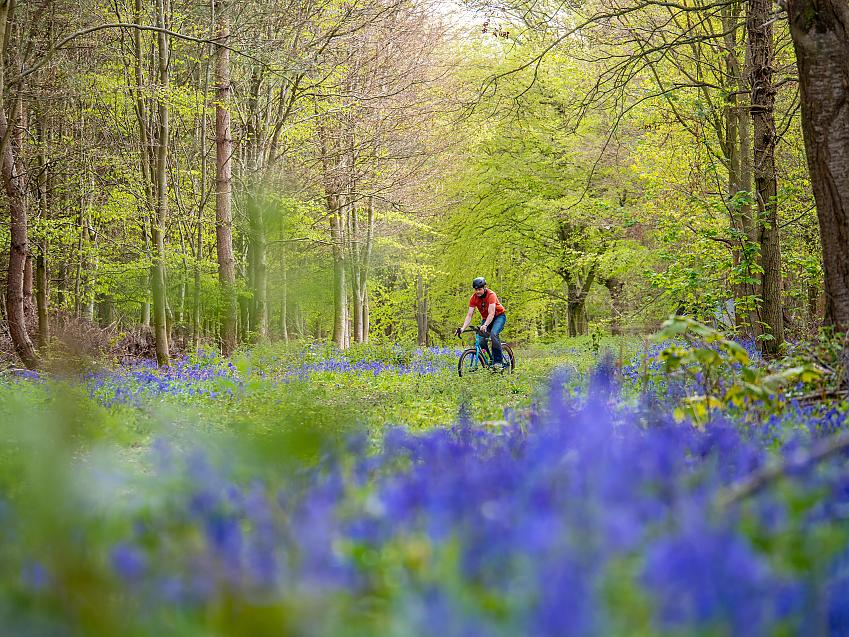 Fallow deer still run free in this former royal hunting forest, alongside new additions of sculptures, so keep a look out. Now managed by the Forestry Commission and the Kentish Stour Countryside Partnership for conservation, recreation and timber production, it is open to the public throughout the year, with Friends of King’s Wood Association holding regular events there.

Horse riding is by permit, while cyclists are allowed to explore the hard tracks, making it ideal for gravel and family rides. It is along these gravel forest tracks that we recommend you travel, unless you’d like a technically challenging trail to finish your ride off with.

The byway has narrowed over the years to a rough singletrack trail that descends to the road, which is best left for experienced riders with mountain bikes. All that’s left now is to glide down the road and back over the River Stour into Wye, where the Tickled Trout pub and riverside beer garden sits temptingly on the far side, offering some-well deserved refreshments for the end of this ride.

EXPERIENCE View
Join our 70,000 strong membership and together we can make a better world by bike Join
Cycling UK continues to support the UK to cycle
This remains true during this difficult period with the ongoing threat of coronavirus Covid-19
Read our latest advice on cycling