This route is best tackled on a gravel bike or tourer/hybrid/MTB with wider tyres. That’s because it steams out into the peaceful countryside west of Hoveton on old railway lines, but it would be easy to shadow on quiet lanes if you want firmer surfaces.

Taking the trail option makes most of the loop blissfully traffic free and keeps navigation super simple for the first 55km. It also allows you to really drink in the timeless landscape of wide open farmland past wildlife-rich woods, winding rivers and flower filled meadows.

As well as miniature train lines and old stations you’ll also pass a wide range of historical sites from ancient to modern before arriving at the beautiful, richly storied city of Norwich. A perfect place to stop and explore before the short quiet lane and byway ride back to Wroxham.

This is one of three routes starting from the Cycling UK EXPERIENCE hub in Wroxham & Hoveton.

Have a look at the other routes: Barton Turf and Ranworth and Malthouse Broads. 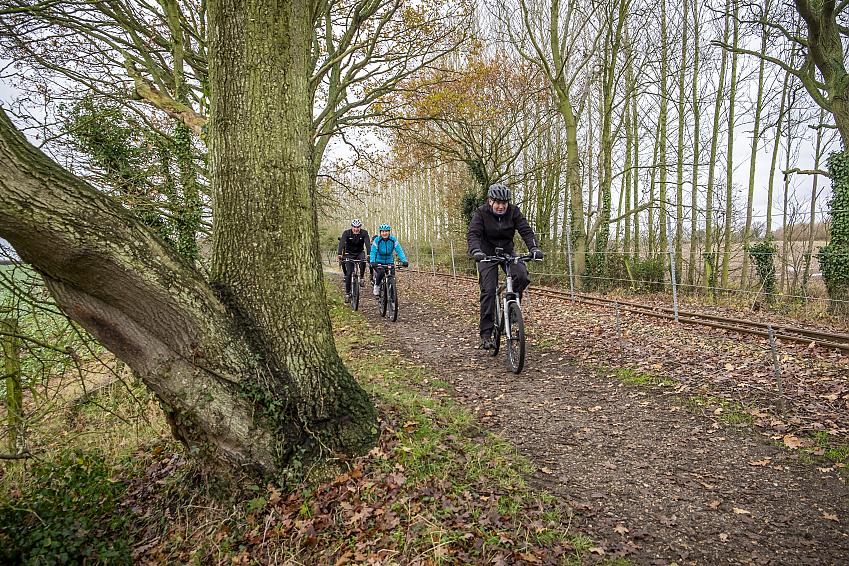 The route starts just under the railway bridge from the current railway station at the Bure Valley Railway station on the northern edge of Hoveton.

The Marriott’s Way Heritage Trail is a multi-user path named after William Marriott, the chief engineer and manager of the old Midland and Great Northern Railway. It still shares the first section with the narrow-gauge track of the miniature trains that run up to Aylsham so keep an ear out for whistles and plumes of steam during the holiday season.

Apart from some gated crossings of quiet country roads, traffic certainly isn’t an issue as the railway tucks you under or over most lanes as you head to Coltishall. 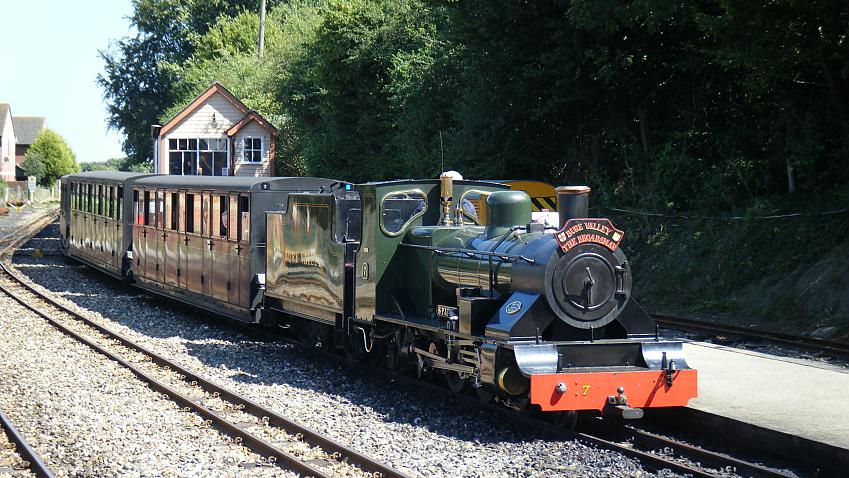 Mentioned as a ’place of note’ for the malting and brewery industry in William the Conqueror’s 1086 Domesday Book, this pretty village is well worth a diversion, with a pub, local bakery and cake shop if you’re already peckish, or to see the row of arches which are all that remain of the Horstead Watermill which used to be the largest in Norfolk. Even just heading on through you can appreciate the old railway station that’s now a private house.

Just to the north of the line you can see some of the concrete blast pens used to protect the Cold War Lightning fighter jets and Jaguar attack aircraft that were based at RAF Coltishall. A large RAF airfield that was established just in time for the Battle of Britain and rapidly achieved an ace reputation thanks to legendary pilot Douglas Bader and his squadrons of Hurricane fighters.

Heading north past small woods and over iron bridges crossing meandering rivers, the going can be a little damp after a lot of rain, but the flat railway gradient means you can take things as easy as you like.

In fact, you won’t be changing gear or pressing hard on the pedals much at all on the whole route unless you want to. That leaves you free to really drink in the unspoilt landscape on either side.

Next, on the northern side is Burgh next to Aylsham. Archaeological finds show it’s been a settlement since the Stone Age and it was a small town with a fort in Roman times. Its position above the River Bure maintained its importance to the Anglo Saxons, and Round Hill was the moated royal manor of Edward the First’s wife Queen Eleanor.

The beautiful Tudor house of Oxnead manor is still a premium wedding venue today, making a short diversion loop north from the old Brampton station is well worth the extra couple of kilometres if history and confetti are your thing.

Rolling under the A140, you’ll get to the marshalling yard and terminus of the Bure Valley Railway at Aylsham. Here you’ll find the ‘Whistle Stop’, a restaurant and model shop as well as the ticket office.

Like most villages in the area there are traces of prehistory, but Aylsham was officially founded by the Anglo Saxon Thegn (nobleman) Aegel who gave it his name in 500AD. It was a centre for weaving throughout the Middle Ages, supplying linen, canvas and worsted cloth to the Royal palaces and was granted a market licence by Henry VIII. Evidence of this is seen in the several half-timbered houses and a thatched well in the town.

It was an important road link between Norwich and Cromer too, with a coaching inn that had stabling for 40 horses. Unfortunately there isn’t room on the tiny trains to take bikes back to Wroxham, but there is the option to take another old railway line to North Walsham, on what is now the ‘Weaver’s Way’ long distance trail.

The Marriot’s Way starts turning slightly south though, and with the Bure Railway lines behind you, you’ve now got the full width of the old track bed to play with. The tree-lined route will shelter you from most weather, but it’s worth pointing out that while the wind can be cold if it’s coming off the sea, Norfolk is one of the driest and warmest areas in the UK. That means its climate is generally as kind as its contours when it comes to cycle touring.

The route passes several more second world war airfields, and Cawston was the site of the last ever duel in Norfolk where Sir Henry Hobart of Bickling Hall (now a spectacular National Trust property) lost his life. It’s the 15th century church of St Agnes with its beautiful Flemish paintings and carvings and original brick floor that’s well worth diverting 100m off the line for though. 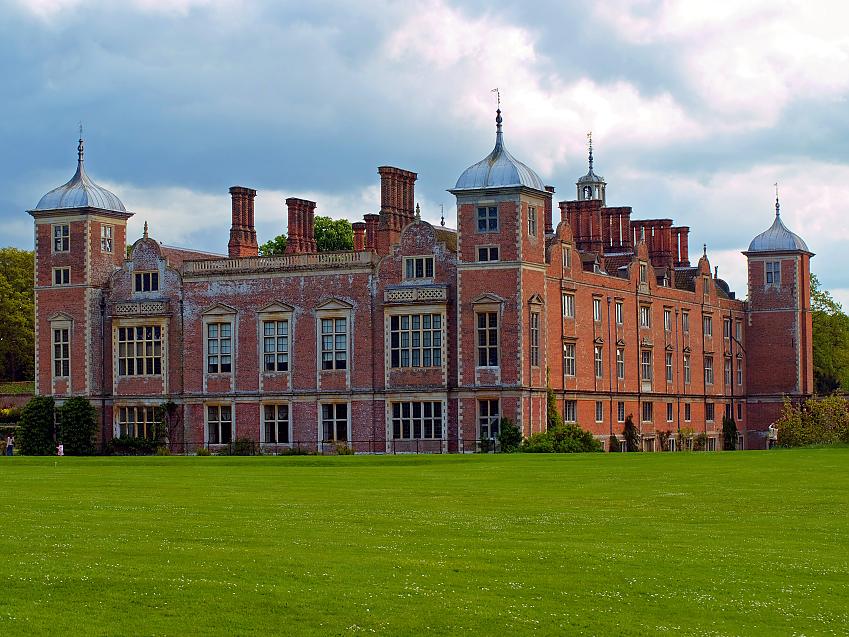 Reepham is another market town mentioned in the Domesday book and packs three churches into a single churchyard, as well as two stations - one of which you’ll roll past en route. It’s also the point where several other old railway lines converge (the Midland and Great Northern Railway – M&GNR – was also called the ‘Muddle and Go Nowhere Railway’ by locals). The Marriot’s Way joins National Cycle Network 1 at this point as it does a complete 180º turn to head east into Norwich.

The Wensum River crossing at Lenwade has been a focal point for activity since prehistoric barrow mounds were created, but it’s the more recent history as a centre of cement production that’s obvious on the line that it helped keep alive until recently.

Heading towards Drayton, the regular ironwork sculptures are augmented by riveted A frame bridges for those who like their artwork industrial. Pastoral fans will be more delighted by the broad water meadows that you roll through on beautiful cycle paths right into the heart of Norwich.

While the Celtic Iceni tribe and Romans set up a few miles to the south at Venta Icenorum, Norwich has been a trade centre of European importance since the Saxons arrived. Growing through Viking and Norman periods to become a city under Richard the Lionheart, it was England’s second largest city until the industrial revolution and the walled area was actually bigger than London.

The riches of the woollen trade saw the building of more mediaeval churches than any other city in Western Europe north of the alps, and many of these churches and mediaeval buildings – including the massive keep of Norwich Castle and the beautiful cloistered courtyard of the Cathedral – still survive despite WWII bomb damage.

As a university town with a thriving music and culture scene, a permanent covered market and a ranking as one of the top ten places to shop, don’t skimp on time to allow yourself to explore and enjoy one of the UK’s most interesting cities. 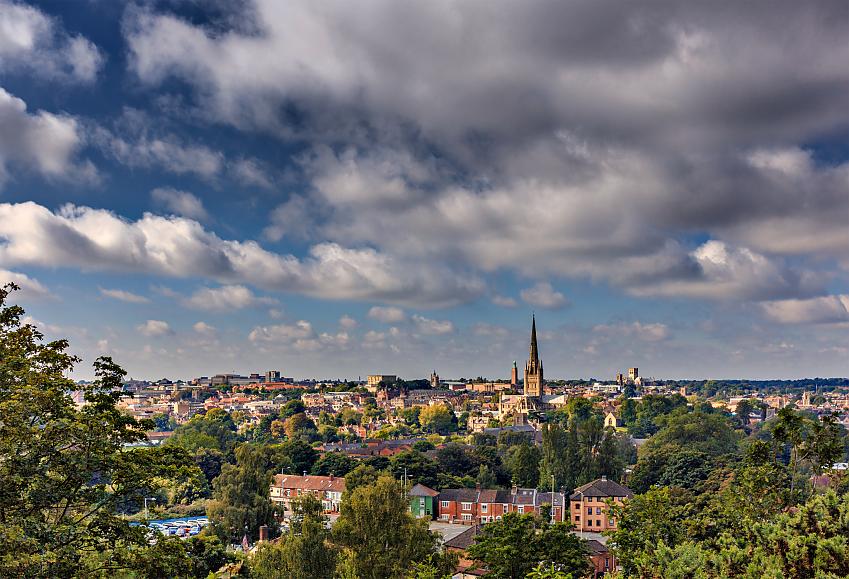 When the time comes to leave though, be prepared for the only real rise of the route as you roll up over Mousehold Heath and then the Racecourse away from the traffic, ducking under the bypass on a bridleway past the village of Rackheath, with its old US air base which still has several buildings that watched Liberator aircraft lumbering off to war.

Ecclesiastical enthusiasts can take the detour spur to the tiny isolated All Saints church with its 12th century sundial and short tower looking out over the rich farmland that characterises this whole area.

From here, it’s a short roll along broad farm tracks through fertile fields with just deer, hares and skylarks for company before sneaking into the back of Hoveton and over the hump-backed bridge into Wroxham to the world of Roys and the finish of the route.

Experience Cornwall by bike View
Join our 70,000 strong membership and together we can make a better world by bike Join
Cycling UK continues to support the UK to cycle
This remains true during this difficult period with the ongoing threat of coronavirus Covid-19
Read our latest advice on cycling