Our second Penzance route is only short at 23km, but, being West Cornwall this loop out to the ancient village and natural spring shrine of Carn Euny is certainly not short on fascination, mystery and fabulous riding that makes the most of the unique Kernow landscape.

While the first climb out of Newlyn is a stinker, once you’re up, the rest of the gradients are a lot more gentle so it’s accessible to all riders. Even the section of off-road to access Carn Euny is safe for any bike with care or short enough to walk if you don’t want to risk skinny road tyres.

This is one of three routes starting from the Cycling UK EXPERIENCE hub in Penzance and Marazion.

Have a look at the other routes: Land's End and Ding Dong. 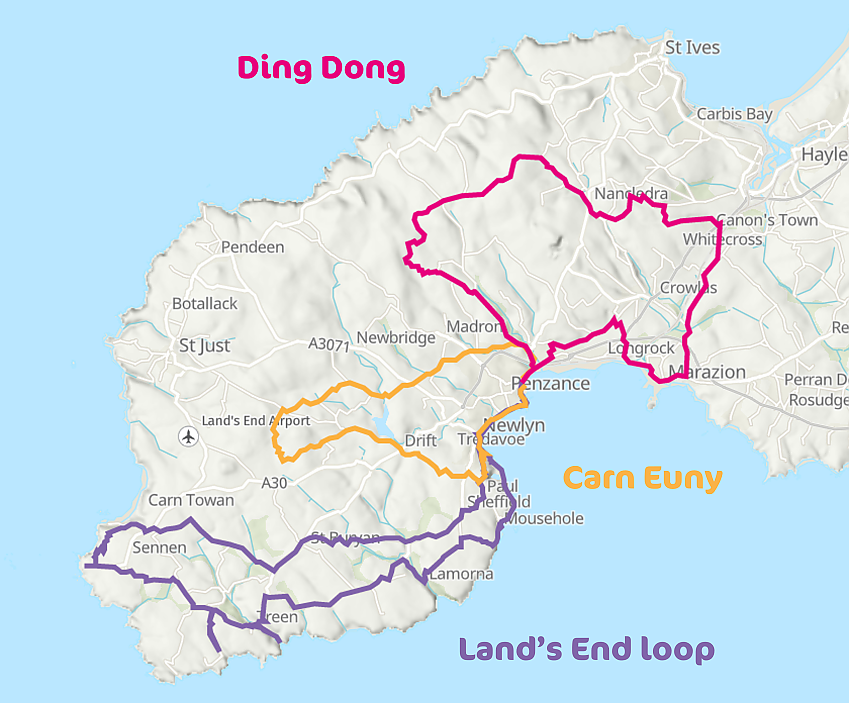 All three of our Penzance routes start at the railway station down by the harbour, and this route follows the start of the Land’s End route past pirate pubs and historic buildings, including the iconic outdoor Jubilee Pool with its Art Deco architecture.

Following the cycle path round to Newlyn you’ll start to rise on the road to Mousehole, but as you pass the old Red Lion Inn it’s time to turn. Again, it’s a section of route shared with the Land’s End route, but on that loop it’s the steep switchback finish descent.

However on this route it’s time to gear down or just get off and push, taking in the views over Newlyn harbour and the whole bay as you climb past tall floral walls and a typically eclectic Cornish mix of houses. The climb finishes up a narrow, floral tunnel that takes you right up onto the tops before you can finally freewheel down to the road to Paul.

Rather than going into the village you turn right, across a B road into another tight run of almost traffic-free back lanes. Use any gaps in the tall banks to try and spot the rich archaeological remains of this area including the prehistoric megalithic stone of Tresvennack Pillar, which had Bronze burial urns at its foot and is part of a whole spread of standing stones and settlements in the area. 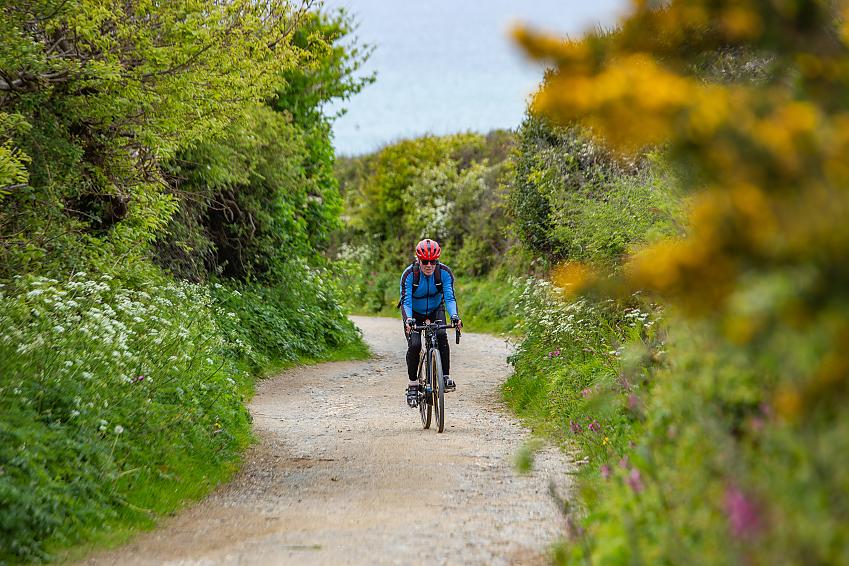 Carefully crossing the main road at Drift, you’ll see the road rises gently to reveal panoramic views of Drift reservoir, with bubbling aerator patches making it look like a giant boiling pan and keeping the drinking water of Penzance fresh.

The gentle climb continues towards Sancreed, a peaceful, pastoral village founded by St Credan close to the existing holy well and baptistry known as St Uny’s, which almost certainly has much older significance.

While you’re welcome to take the detour to include these, our route continues west towards a site that has a truly ancient past. The mystical, timeless atmosphere is palpable as the road narrows between tall banks with grass and gravel, up the centre in places and tiny Celtic stone walled fields crowd in the shadow of two low hills.

To the south, Tregonebris has an ancient settlement with stone rings and a well. To the north, Caer Bran has a banked prehistoric fort site as well as a smaller enclosure which would be the highlight of most historical landscapes.

However, this isn’t ‘most historical landscapes’, and as the lanes narrow even more, you pass a Stone Age Neolithic cairn burial site before weaving through the hamlet of Brane, where the stone farm buildings don’t seem to changed in centuries.

We’re going back millennia now, as the road becomes more of a gravel and rock track following the brown heritage signs to Carn Euny. There’s a short push along a tiny winding footpath, past a spring shrine bubbling up from under a massive boulder where modern visitors have continued the Celtic tradition of leaving ‘clouties’ (strips of cloth) for the water spirits. Confirmation that this is a truly special place is just a few metres away as you climb over a low wall and into Carn Euny itself.

The stone house footings you can see are Iron Age in date - when Cornwall was a centre of trade up and down the whole European Atlantic coast and even into the Mediterranean and Middle East. Archaeological excavations show it’s been occupied since the Neolithic period, before tin was mixed with copper to create the wonder metal bronze, making Cornwall famous across the classical world. 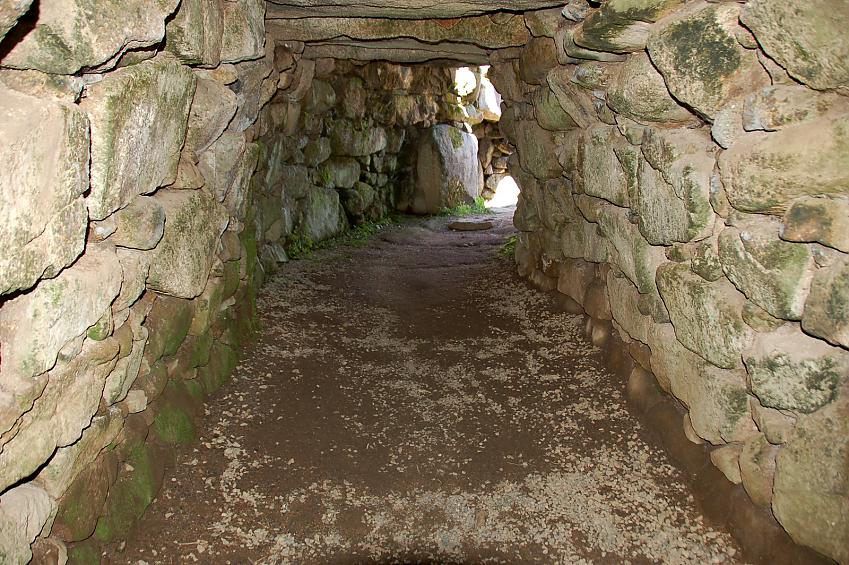 As much as the buildings and the panoramic views are breathtaking, and make you wonder at the past lives and stories woven around them in at least 6,000 years of occupation, it’s the hidden ‘fogou’ that’s the heart and highlight of this site. Multiple low stone entrance tunnels lead to a breathtaking dry stone ‘igloo’ buried in the centre of the site, where a central skylight throws light onto a solitary stone on the floor. Whether its purpose was social, spiritual, safety, or just storage isn’t known, but watching the sun beam down onto flowers and other offerings from recent visitors is a truly other-worldly experience.

When you can finally tear yourself away, it’s time to follow the ancient tracks of our ancestors north, looking out over Bartinney Downs which are a nature reserve as well as the site of a prehistoric hill fort, more hut circles and burial cairns. Don’t get too distracted though, as the descent to Higher Trevarthen is both fast and rocky so definitely needs care - or perhaps a judicious push on narrow road tyres.

There’s still plenty of smooth road descending to be done though, so you won’t be grumbling as you whistle through Grumbla canopied by beautiful woods alongside springs and streams. Be ready on the gear change for a series of steep but short climbs in the shadow of The Beacon, another hill loaded with prehistoric remains, and then across the ancient crossing point of Skimmel Bridge at the head of Drift Reservoir.

Climb again to Tremethick Cross, where you scuttle across the main road and then vanish into more floral-banked back roads winding around the back of Penzance past the National Trust gardens of Trengwainton House, where green-fingered fans are sure to want to stop. If you loved the spring and clouties at Carn Euny there’s another site at Madron a kilometre to the north.

Otherwise it’s a contouring roll across the top of Heamor where you join the outward leg of the Ding Dong route, giving the potential of a 50km combined route (or a 95km route if you all three routes together.)

If you’re done for now though, roll down the hill, under the main road and along the front back to the station start.