This route is ideal for a gravel, tourer/hybrid or hardtail mountain bike as it uses a mixture of byways, quiet lanes and well surfaced cycle paths along the way.

The ride starts from an amazing high point with wonderful views overlooking the busy Dover docks below, with boats and vehicles coming and going.

You’ll be heading inland first though, past Dover Castle and joining an old Roman Road for a dead-straight journey northwards through the quiet countryside to Betteshanger.

Once you reach the coastline, your journey becomes busy as you follow a well-surfaced cycle track southbound, alongside miles of lovely shingle beach.

With plenty of worthwhile distractions along the way, from castles to ice-cream and afternoon tea in china cups served from a lighthouse, it’s a quintessential English journey back to Dover, which shouldn’t be rushed.

Have a look at the other routes: Kearsney & Alkham and Samphire Hoe. 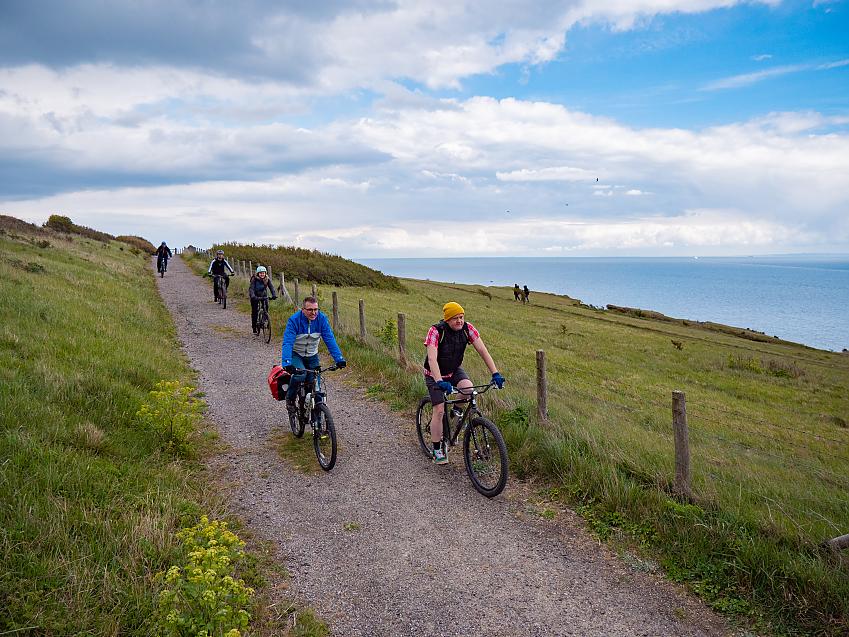 Starting from a wonderful viewpoint overlooking the busy port of Dover it’s difficult to drag yourself away from this interesting spectacle, but once you do, the route takes you inland, passing behind the medieval Dover castle.

This is the most iconic of all English fortresses: founded in the 11th century, it has commanded the gateway to the realm for 900 years - from Roman times to the 20th century, through two world wars. It’s described as the ‘Key to England’ due to its defensive significance.

With over 80 acres of grounds to explore, battlements to walk, rooftop views, secret wartime tunnels, an underground hospital and much more, a visit inside is one to save for another day. Your route continues north, past Fort Burgoyne Western Redoubt, which is currently closed to the public but has been acquired by the Land Trust, with a vision to making this dramatic location a key part of the community once more. 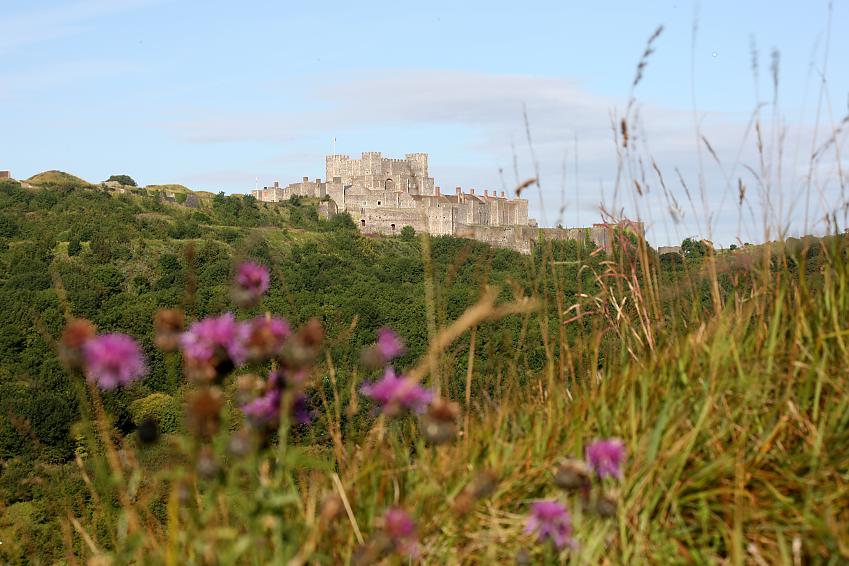 As you start to leave Dover behind you, you pass by The Duke of York's Royal Military School, a co-educational academy with military traditions, before crossing over the A2 road and heading off-road.

Your surroundings now change to fields and trees as you follow a firm byway track and old Roman road which forms part of the North Downs Way National Trail; a long-distance route that follows an ancient Pilgrim route between Dover and Canterbury. This retraces the steps of Archbishop Segeric who travelled the route in 990AD from Rome to Canterbury on what is now known as The Via Francigena, the UK’s only European Cultural Route.

That journey is for another day, however, as you continue your adventure along the straight Roman road which switches between tarmac and off-road byway tracks, all the way to the small village of Betteshanger. After passing the beautiful St Mary’s church the route heads eastwards, winding its way back towards the coastline, where you pass through the quiet village of Northbourne - home to St Augustine’s church, which is rich in history.

You continue through another picturesque village, Great Mongeham, and then on to Sholden and one of Deal’s four churches: St Nicholas’.

You skirt now along the southern edge of the new Betteshanger Park, situated on a former colliery spoil site. It has been transformed into a wonderful outdoor area, hosting a wide range of events and offering numerous activities.

With over 10 kilometres of mountain biking trails, graded blue and red, it has something to suit a range of riders, from families to the experienced, and also offers both bike hire and coaching. You can follow the bridleway left and enter the park for a lap if you wish (but take note, the gate here closes at 4pm!). 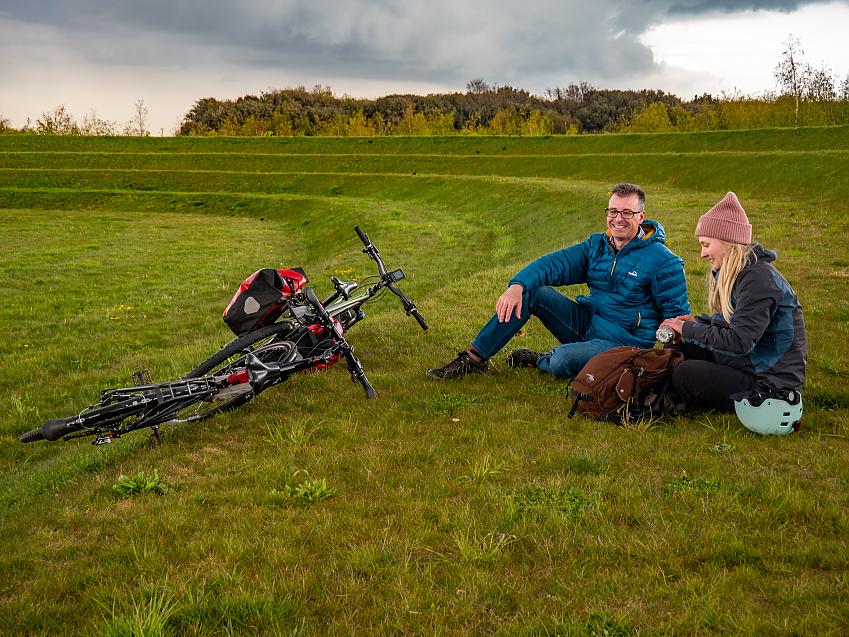 Following the route right, you make your way to the coastal town of Deal, which hosts a market on Saturday where you can find treats both local and foreign. Along with other cafes, shops and restaurants it makes a great place to stop for refreshments along your journey. You could even enjoy a refreshing paddle in the beautiful turquoise sea to cool your feet.

The coast here attracts both tourists and locals alike, so it is usually buzzing with people, but with a long stretch of coastline and shingle beach which becomes quieter as you head south, you should have no trouble finding a quiet place to call your own. 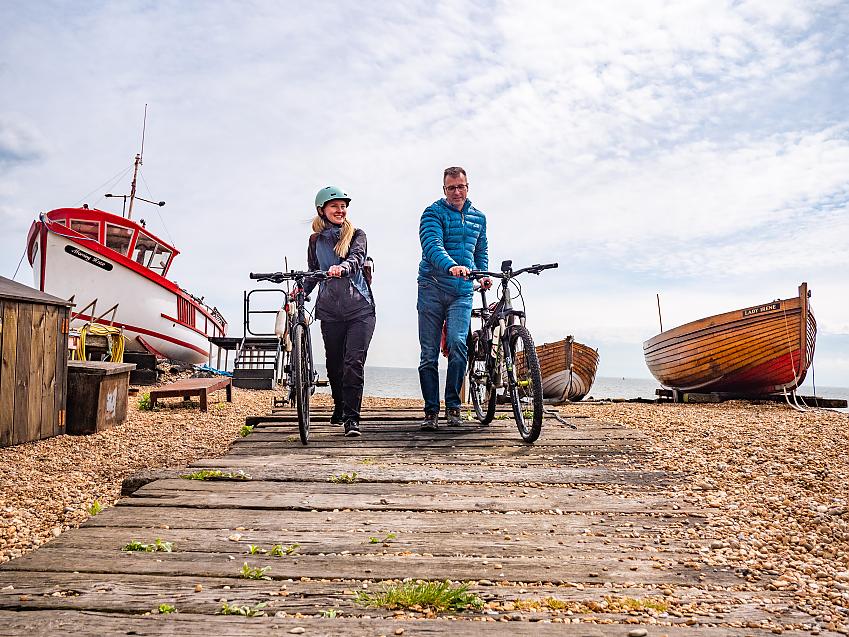 Bicycles can’t be taken onto the pier, but there is some cycle parking. The current Deal Pier is the third to be built, after the first one built in 1838 was washed away during an 1857 storm. In 1863 a new pier was commissioned and built to a length of 1,100 feet and had a tram that carried luggage and goods up the steamer landing stage for the convenience of its patrons.

A pavilion was built on the end in 1886 for concerts, and a reading room added in the mid 1870's - but even after surviving some collisions from ships, the army was given permission by Winston Churchill to demolish the pier in 1940, to allow coastal guns a clear line of sight.

The third, and current structure, built from reinforced concrete, is 1,026 feet long and was opened in 1957 by the Duke of Edinburgh. The four shelters on either side are very popular with anglers, with a 'Heaviest Fish of the Month' competition run by the local angling shop.

Your route now heads south from here, following a traffic-free cycle path along the coastline, but if you wish to explore the town further, look out for the maps that show places to visit: conservation areas, public toilets, cycle parking, green spaces and of course other cycle paths.

In no time at all you’re passing Deal Castle, constructed by Henry VIII between 1539-40, this artillery fortress was constructed to protect against invasion from France and the Holy Roman Empire, to defend the strategically important Downs anchorage off the English coast. It is one of the finest Tudor artillery castles in England, so well worth a visit – you can explore the circular rooms at the top, to the storerooms and tunnels at the bottom.

A short pedal further along the coast brings you to some more recent and tragic history, the Royal Marine’s bandstand memorial. Built in memory of the 11 Royal Marine musicians who were killed on 22nd September 1989 by an IRA bomb at the Royal Marines School of Music, it plays host to a popular concert held in July each year in their memory.

It’s not long again until you are passing another place of interest; another of King Henry VIII’s artillery castles, this time located in Walmer. The former Tudor artillery fortress became a stately home for the Lords Warden of the Cinque Ports, including the Iron Duke of Wellington.

The picturesque coastal castle is currently home to over eight acres of award-winning gardens. With colourful displays and cool shaded spots, as well as having a fascinating history, it too makes for a pleasant stop along your journey. 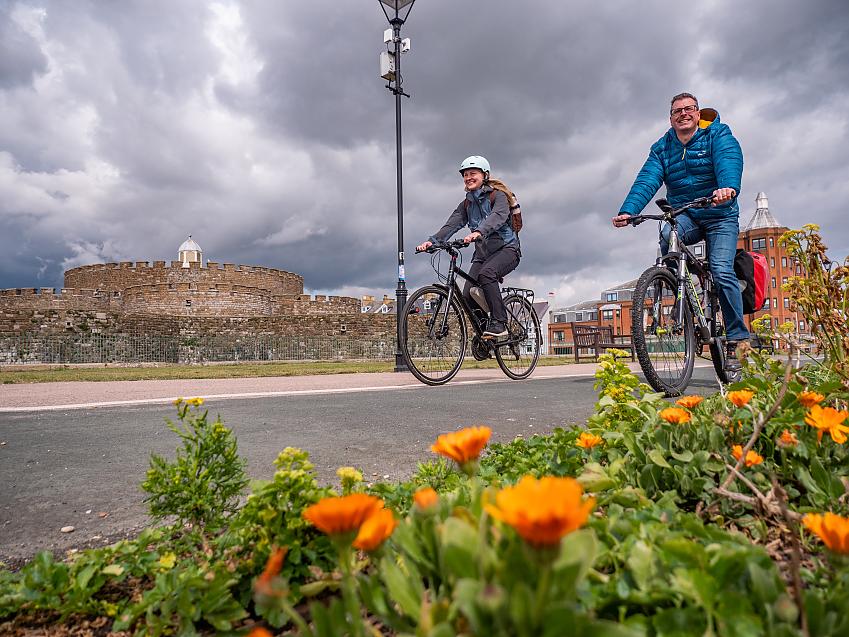 Now leaving the town and coast behind you, the route climbs the hillside along a quiet track, and with a cool coastal breeze, you make your way to St Margaret’s at Cliffe, where you can bear off left to read the information boards about Henry Royce - co-founder of the world-famous Rolls Royce company - who moved here in 1913 to get away from his daily stresses in Derby.

There are a couple of cafes here too, but if you are willing to ride a little further, on an out-and-back route along a quiet roadm you can get to the Victorian South Foreland Lighthouse, which was once home to a lighthouse keeper, but is now home to a lovely little tea-room.

This 19th century lighthouse – the first to use an electric light – now serves visitors with loose-leaf tea in china cups alongside delicious treats, and tours of the lighthouse. You can sit outside and enjoy the cool sea breeze and views of ships coming and going across the channel.

Sadly, the wide tarmac track out of the back of the lighthouse is not open to cyclists, so you have to retrace your tyre tracks back to St Margaret’s at Cliffe to continue your journey.

The road runs parallel to the coast and as you approach Dover, it provides a wonderful view of the castle before you head off the road and drop back down into the car park. Finishing the ride with those wonderful views over Dover docks once again, it offers a fitting time to reflect and admire the wonderful journey this ride has led you on through the countryside and along the coast, as history merges with modern time. 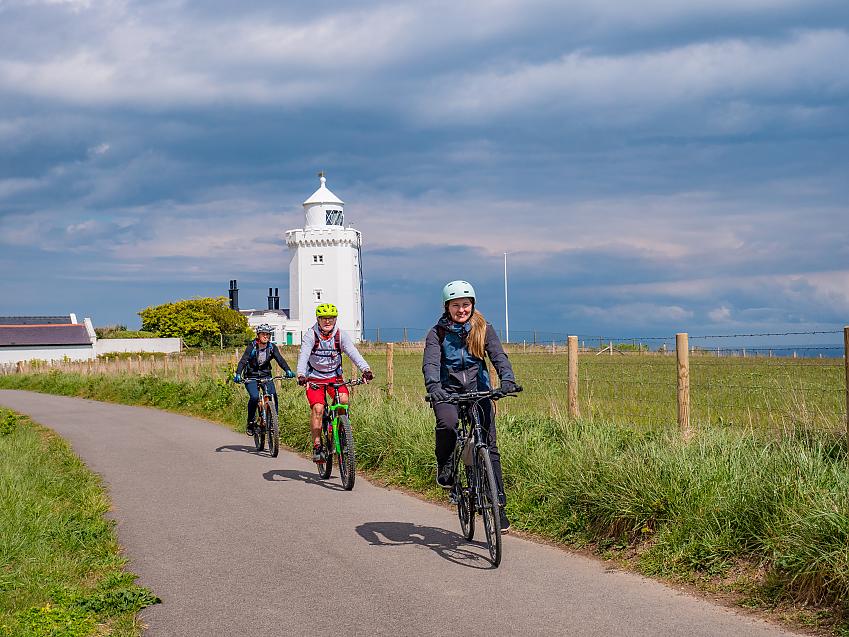