The longest of our three Cromer routes takes you up over the hill behind town, past the South American themed Amazona zoo, before rolling majestically through the National Trust parkland of Felbrigg Hall.

It continues effortlessly out through historic villages and farms offering fresh produce on almost totally traffic-free roads beneath vast skies.

You turn north though the bustling market town of Holt, then climb gently on rarely used rolling lanes before dropping to the coast at Blakeney.

From here, you daisy chain back towards Cromer, linking totally different versions of the Norfolk coast at Weybourne and the busy seaside town of Sheringham via inland loops, through heath and woodland with stories stretching back many millennia, before reversing the start back into Cromer.

While this route is entirely road based, if you have a gravel bike and an adventurous spirit, there are more direct off-road options for several sections, particularly on the return leg from Sheringham to Cromer.

This is one of three routes starting from the Cycling UK EXPERIENCE hub in Cromer.

Have a look at the other routes: Mundesley meander and Great Wood gravel ride. 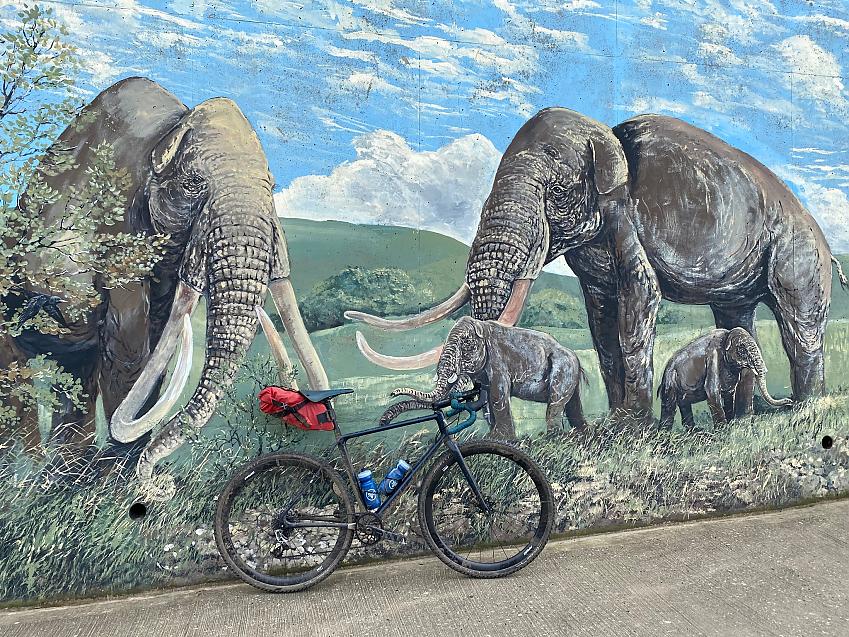 Rolling out from the seafront start can be a confusion of meandering pedestrians and one way traffic, but muddle through and you’ll soon be climbing gradually alongside the park.

Following the Weaver’s Way long distance path, you’ll soon be rolling through woodland and open fields past the Amazona zoo before the final climb (don’t worry, it’s only 60m in height gain from overlooking the pier to here) up to the crossroads.

The charming Mustard Pot cottages mark the gatehouses to Felbrigg Hall (holiday accommodation for hire) but be careful crossing the road as it can be busy with fast traffic. The opposite is true as you roll down through the woodland where deer are more likely to be an obstruction than vehicles.

The Tudor founded Felbrigg Hall is worth a trip in itself with sumptuous interiors, walks through the National Trust-maintained park, and a tempting tea room in the walled gardens. We roll right round the front of it too, looking out over the parkland and fish ponds before leaving the west gate and continuing down singletrack lanes south past the gorgeous estate complex of Park Farm, and then turning east to the restored cross south of Aylmerton.

Lower and Upper Gresham are still laid out exactly as they would have been centuries ago, and many of the remaining houses date from those times too. Unfortunately the remains of the four-turret castle are now obscured by a clump of trees, but the water-filled moat still survives around the edge. 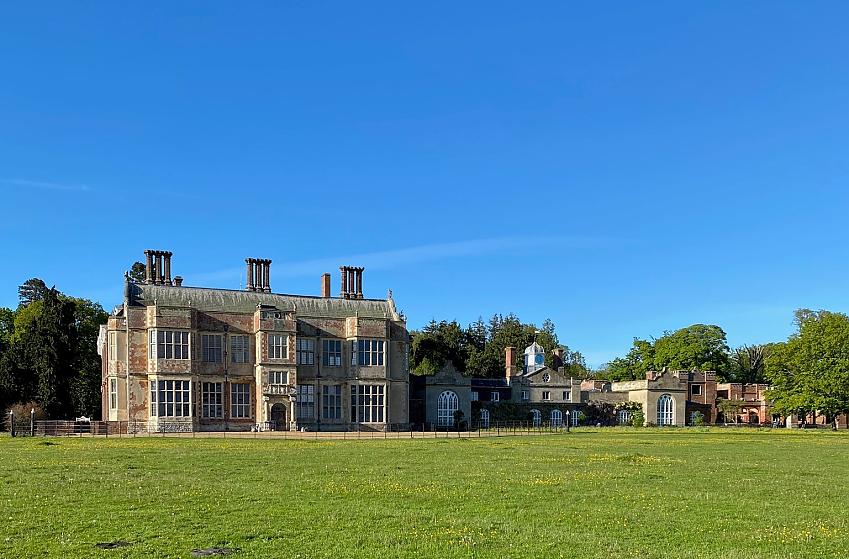 Heading west, it’s all about enjoying the easy progress enabled by the lack of contours under the canopy of a huge sky, past occasional farms generations deep in stories grown from this hugely fertile landscape.

Then we divert south for a moment of contemplation at the recently cleaned and rejuvenated Selbrigg pond. Dug as a header reserve for the Hempstead Mill which is a continuation of a milling tradition from well before Domesday, it’s now a tranquil oasis of water life from birds to otters and assorted amphibians. You’ll pass the massive - currently derelict - mill building a couple of kilometres later as you head into Holt, ducking under the handy underpass into the thriving market place centre. 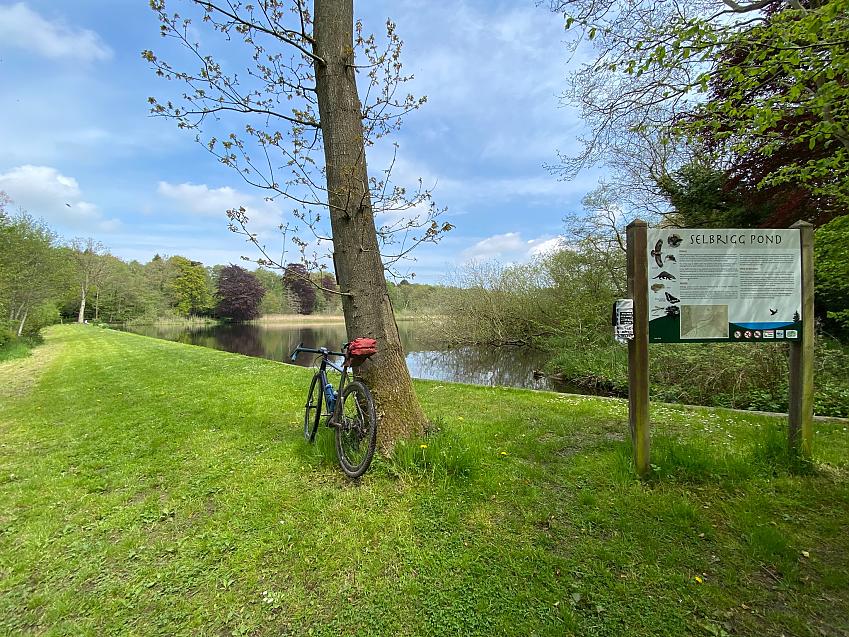 At just under halfway round, this is a great place to stop and take a break among the charming houses - or to just pick up supplies for a seaside or heath-top picnic later. Quiet back roads take you north, dog-legging across to the old farmstead/new industrial estate of Bayfield Brecks. There’s another similar centre across the broad ford (don’t worry there’s a footbridge too) at Glandford, and hopefully the wonderful-sounding deli and farm shop that left us licking our lips will be open by the time you arrive.

The sand-centred, flower and fern banked lane up to the nature reserve and SSSI of Wiveton Down is utterly timeless and tranquil. The crossroads at the top give you the opportunity to take a gravel extension a kilometre across the top of Blakeney Down, but the roll down the grandly named but barely bar-width Saxlingham Road gives incredible views over the marshes and dunes of Blakeney National Nature Reserve.

Blakeney (black island) itself is a lovely village with a long history of significant international sea trade related to its natural harbour behind the protective dunes. The importance of Blakeney is confirmed by a Friary dated to 1302 as a guildhall with 14th century cellars and a church built with two towers to help sailors navigate the sand banks into the port.

Not all the locals were so kind and helpful though, as the village had a reputation for piracy and even refused to send a ship against the Spanish Armada.

20th century silting sealed the harbour to all but small boats, but its knot of tight streets and alleys plus charismatic buildings including the harbour front hotel and other inns make it a popular visiting spot. You can also access the unique freshwater marsh nature reserve for birdwatching, crabbing, fishing, canoeing, boat trips to seal colonies or just walking round past Blakeney Chapel to the neighbouring village of Cley next the Sea.

Our route takes you back inland over the ancient bridges at Wiveton, built by a local merchant to create a permanent crossing over the River Glaven which had previously only been possible upstream at Glandford ford. He did a remarkably good job as the majority of the original stone structure from circa 1310 still carries the weight of traffic today. 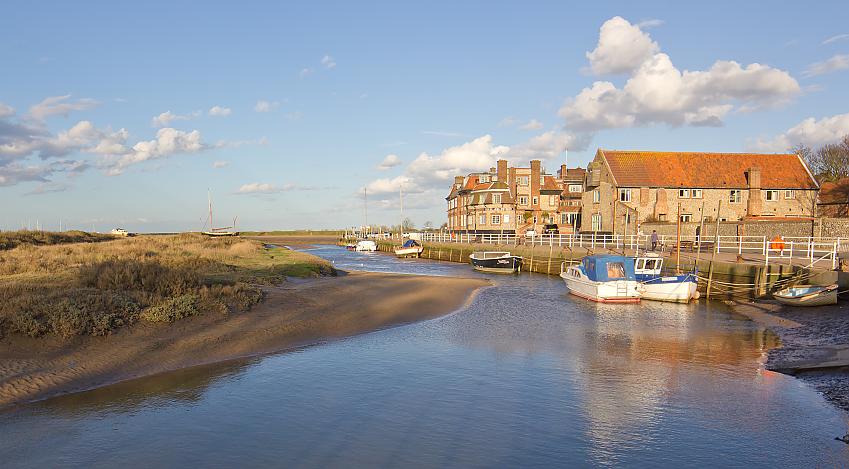 The archaeology of Salthouse heath on the far side is dominated by the largest surviving barrow cemetery in Norfolk, where 30 Bronze Age barrows look out over the coast from their raised position. Mesolithic and Neolithic flint remains show the area was in use from our earliest occupation of the UK too.

From the top of the hill we enter the optional phase of the route, where you can add or remove various returns to the coast depending on how much you want to see, and how much you don’t want to pedal back up to the ridgeline to dodge the main coast roads.

We think it’s well worth dropping down to Weybourne and taking the short out-and-back road to the shingle beach, just because it’s so dramatically different to the coast you’ll have seen so far.

We’re a sucker for a picture of a bike leaned up against one of the rusting caterpillar tractors used to heave the local fishing boats up the steep pebble bank from the sea, too. Fans of militarised caterpillar track vehicles won’t want to miss the Muckleburgh Military Collection just down the road either, where you’ll find more than 150 exhibits including tanks, armoured cars, bombs, artillery and missiles from WWII to the Gulf War. You can even book a tank ride if you fancy a change from pedalling. 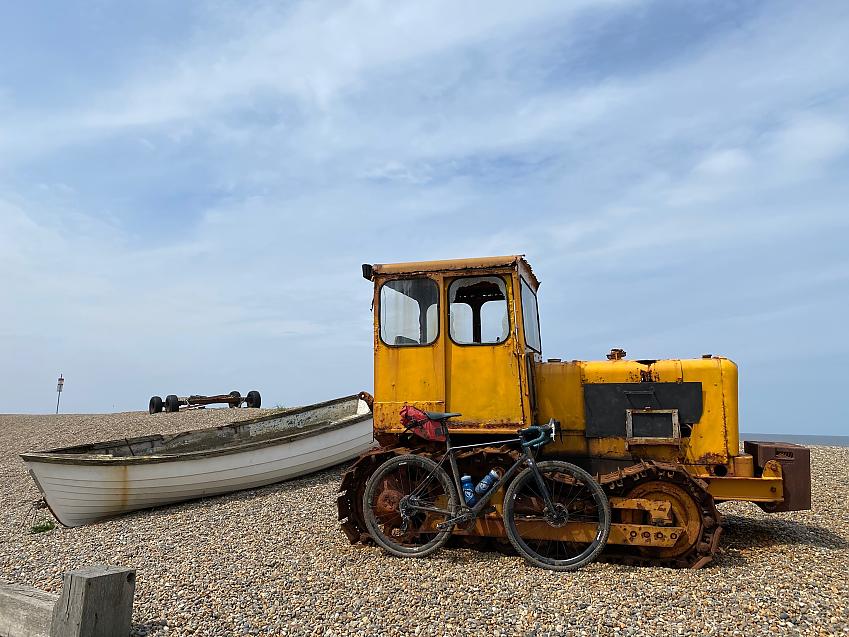 While the climb back south is strenuous by local standards it wouldn’t even get a mention in most places, and the charming, vintage railway station of the North Norfolk Railway is perfectly placed to get your breath back as you peer over the bridge. Weybourne heath mixes more prehistoric burial mounts with concrete ‘pill box’ defences from what was an extremely heavily defended area 80 years ago. 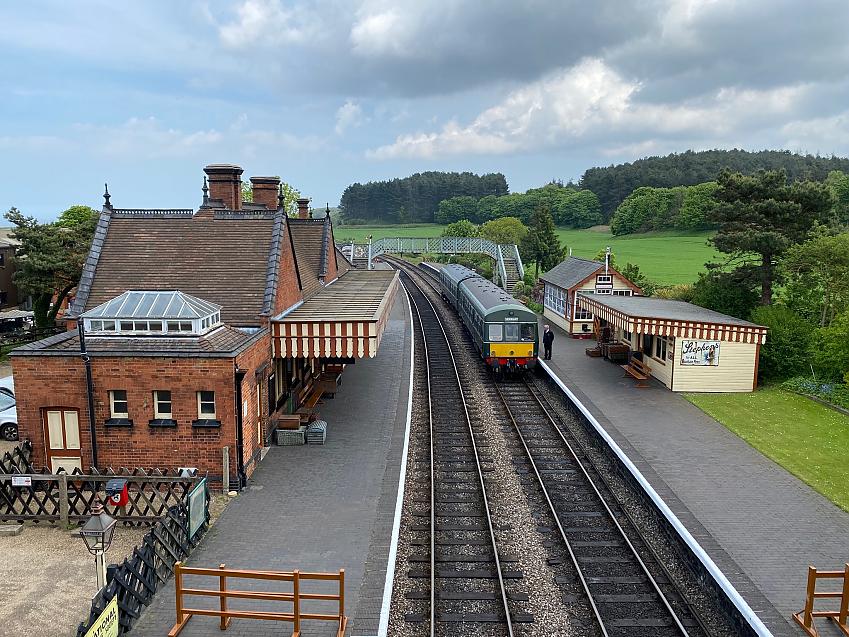 Carefully crossing the main road at Bodham, you’ve got another decision to make at West Beckham: continue on parallel to the outward leg through the Greshams, or head north past the ornate gateway of Sheringham Park and down into the busy and very characterful town of Sheringham itself.

Packed with pubs, cafes and shops from traditional fishmongers (we bought a fabulous fish platter to bring home) to artists’ studios and decent sized supermarkets, it makes a great stopping point.

The long sandy beach and promenade with massive mammoth mural (see if you can spot the artist himself disguised as a caveman) as well as local history and lifeboat museums provide plenty of interest based around the fascinating prehistoric and present ‘Deep History’ coast, and the theatre has a great reputation as well.

The only drawback to dipping into Sheringham is getting back out without just retracing your route. That leaves the only option a short pedal along the thankfully broad main road (or a push along the similarly broad footpath) to West Runton. From here, you can head inland up past earthworks known locally as ‘The Roman Camp’ before crossing the A148 Kings Lynn road and then reversing the regal route through Felbrigg Hall estate and rolling into Cromer the back way.

Whichever options you add or not, we know you’ll be as surprised as we were by the delights and diversity of this route even before you’re back looking out over the pier.