New Cycling UK member, Edward Keeping from Kent has just turned 87 and is still cycling regularly, using his bike to help out others. His friend, Mick Rendell, tells Cycling UK why he has nominated Edward for a Going the Extra Mile award and how he is an inspiration for others

I have known Edward for about 15 years and I am his financial adviser. His is a captivating cycling story: his dad bought him his first bike, a Dawes, aged 11. He then bought a JC Penny for 13 guineas in the 1950s, which he used to travel all across the UK, Spain, America, France and Peru. He was a member of Cycling UK (CTC as it was known previously) for 50 years before recently rejoining.

As a young man in his twenties, he would take three months off his job as an ambulance man each summer and cycle to southern Spain on his single speed, carrying double panniers front and back, camping as he went and climbing hills to visit churches and monasteries along the way. Then, when he became a parent, he took his son on rides across America and across Europe. He would also cycle most weekends and, on bank holidays, venture from Harrow down to the West Country, fighting his way back late on the Monday to work on the Tuesday.

We still talk about the days when he bought his second, hand-built Holdsworth with three gears, which he calls “an absolute marvel” - he has no concept of the Di2 I now have!  All this time, he has regularly cycled and amazed people who don't understand his mentality and ethos.

Why I nominated Edward for a Going the Extra Mile award

Edward and his wife Margaret do a lot of work for the parishioners of the local church and, throughout the pandemic he has spent time writing notes and cards and delivering them on his bike to members of the congregation who live alone. For as long as I have known them, they also take six members of the congregation, who live alone and do not have family, out each week (about thirty people in rotation) and buy them Sunday lunch. But more than that, they joined the local golf club, even though they don't play the game, just so they have a nice setting to take the people on a Sunday. 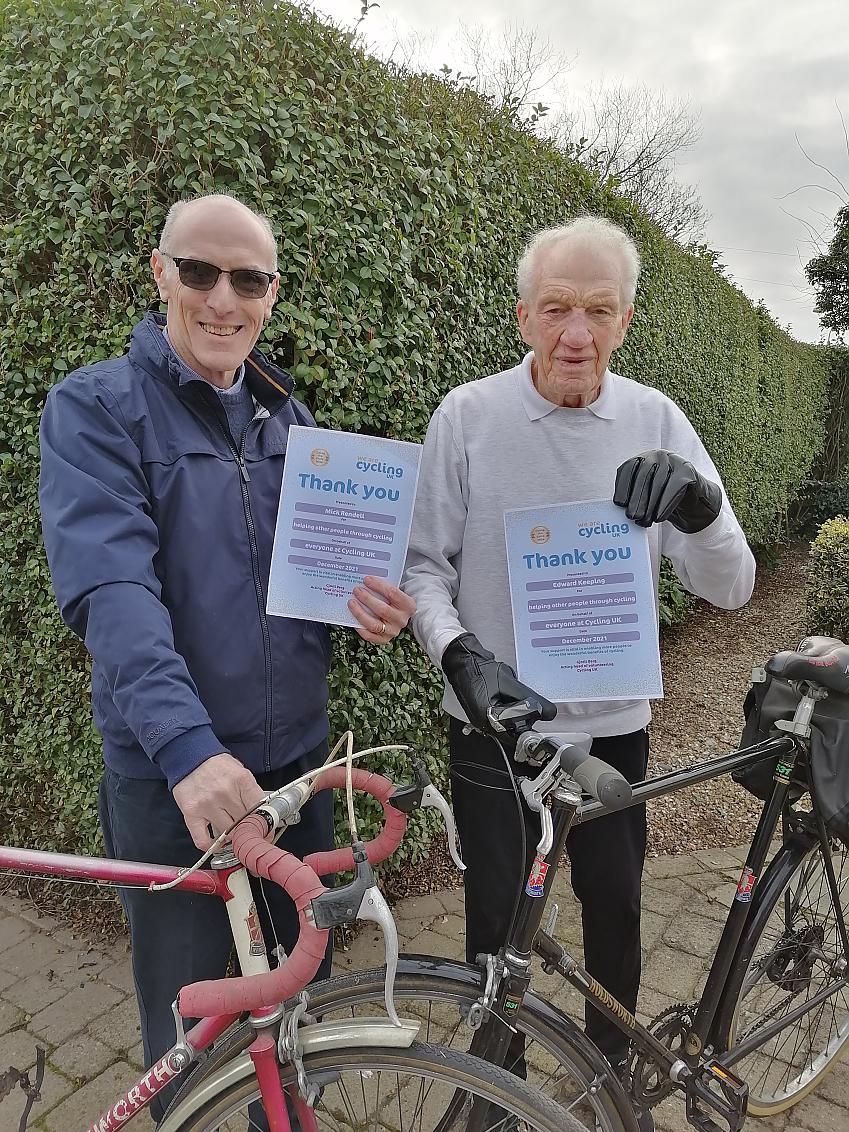 As well as performing acts of kindness for other people by bike, Edward is also inspiring as an everyday utility cyclist. About six years ago, then aged 80, Edward had bowel cancer and, when he went for his pre-op, he was there for several hours before coming away with a large bag of prescriptions. The nurse asked if someone was picking him up. Edward replied: "No". The nurse then asked him if wanted a taxi. "No, it’s okay I have my bike outside." "Motorbike?" "No, push bike", replied Edward and, without a second thought, cycled home the five miles.

He also does things like take books to his daughter and her colleagues, who are teachers in Dover, if they need them, cycling the twenty-five miles there and back again, to their amazement.

About four years ago, Edward nearly gave up riding his bike. Luckily, I was due to meet him, and asked my usual question: "How’s the cycling?". Disappointed and dejected, he replied: "I might have to give up - I haven’t got the strength in my hands to pull the brakes anymore. When I am out, it feels dangerous and I may not be able to stop." I said: "Really? Maybe it's a bad cable or something?" and I suggested we have a look.

In the garage was the beloved 50-year-old Holdsworth. Edward said: "Look at that. What would my peers say if they saw those handlebars?". He had had a local bike shop replace the original drop bars with flat bars. My reply was that at age 80, 50% are not with us any more and the other 50% would look on with envy!

I feel so proud he is still out there to this day, cycling around the community helping others on the bike he loves so dearly

We inspected the bike and I couldn’t pull the brakes either. The reason? The shop had fitted two finger V-Brake levers to his half century old caliper brakes. It was impossible to use them. I suggested we try a set of normal full-length levers and said I possibly had a set in my garage. The next day I went over and we fitted the new levers and they worked perfectly. His wife still says he tells everyone that his financial adviser is a guru, but it was just a tiny adjustment and I feel so proud he is still out there to this day, cycling around the community helping others on the bike he loves so dearly.

Not only did Mick help Edward fix his brakes so he could carry on enjoying cycling and helping others, he generously decided to gift him a Cycling UK membership as well.

Cycling UK thought Mick was as deserving of recognition as Edward for this thoughtful gesture so we were delighted to reward them both a Certificate of Thanks.

Why not tell us about your local cycling hero and why they deserve recognition for Going the Extra Mile too?

A reason to volunteer for Cycling UK View

Here's how to thank your volunteers for all they do View