Portsmouth CTC is one of the longest-established Cycling UK member groups in the country and has just celebrated its 95th anniversary. Member Joy Forrow tells us more about this thriving group, its amazing volunteers and the numerous activities they organise.

Portsmouth CTC's recent 95th birthday barbecue tea was a great success, with members old and new descending on Wilf and Joy Forrow's beautiful garden in Hayling Island. Derek Hayday was the earliest member there from Portsmouth DA, the predecessor to Portsmouth CTC, so he had the honour of cutting the beautiful birthday cake. Derek explained: "I joined the CTC (now Cycling UK) in January 1956 so have unbroken membership for 65 years and hold a Life Membership card which is supported by my mileage total to date of over 418,000 miles which is recorded by the 300,000 mile club.” 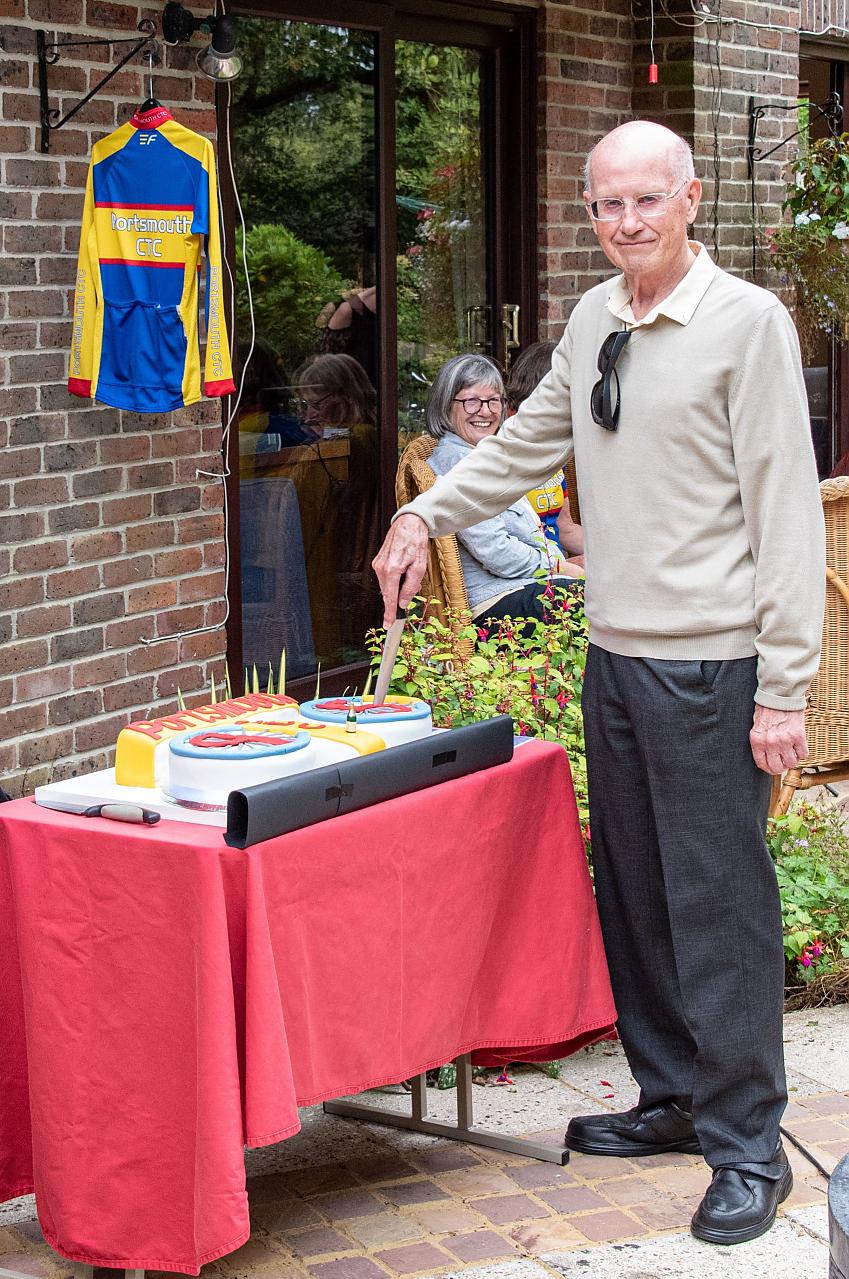 Andy Henderson, the group's secretary, was presented with a Going the Extra Mile thank you card for his efforts in being an outstanding volunteer, combining not only the role of secretary with being website organiser, ride leader, and Dr Bike mechanic. He also received a personal letter of thanks from Cycling UK's Chief Executive Sarah Mitchell.

There were also tributes to mark the passing of the group's local legend, and previous world record holder for miles cycled, Chris ‘CCP’ Davies, who was on track to do a million miles. 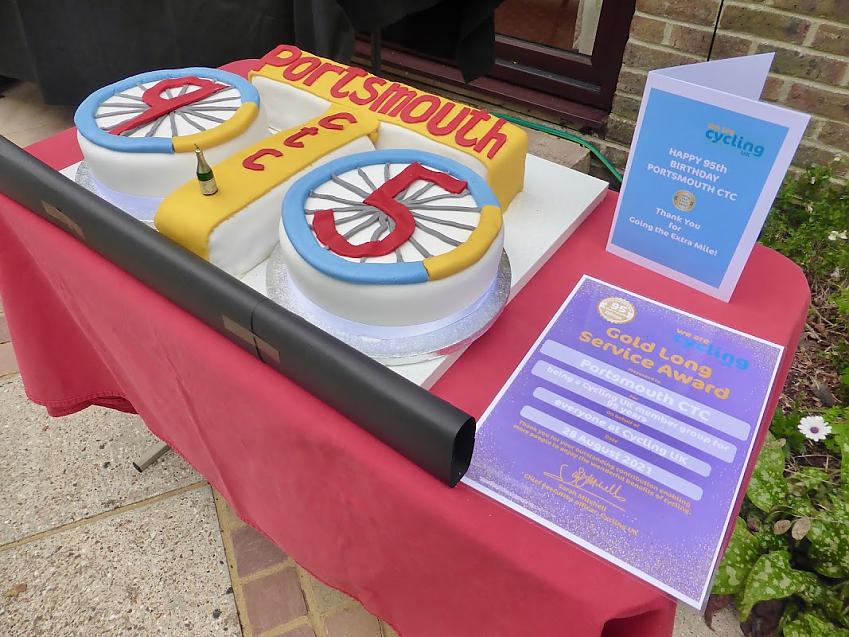 A brief history of the group

Portsmouth CTC is a Cycling UK member group, which means that all its regular riders and volunteers are all paid-up members of Cycling UK. In previous eras, these groups were known as either District Associations (DAs) or sections, which were groups that belonged to a particular DA. Portsmouth CTC started in 1926, according to its official history; in the early 1920s if you rode with the CTC in this area, you would probably have ridden with the South Hants DA (Portsmouth section). They rode from Portchester crossroads or from the Fountain, Cosham.

The first recorded mention of the Portsmouth DA is in the CTC Gazette (now known as 'Cycle' magazine) of April 1926 when the divisional councillor proposed the formation of a new District Association. On Sunday 9 May 1926, the first day after the inaugural meeting, the DA ride was from Portchester to Stonehenge (and presumably back). In the June issue of the Gazette, there was a brief report of the inaugural meeting. Officers were elected and scarlet and gold were adopted as the DA colours. Havant section started in 1984, originally as Havant cycling campaign, to make the old Hayling Billy railway line into a cycle path. They ran rides initially on Saturdays '50 miles, leisurely pace, nobody left behind'. Wednesday rides were added later.

How has the group coped with recent challenges?

During the Covid-19 pandemic, Portsmouth CTC had to stop all its rides, with the majority of riders falling into the vulnerable category. However, when rules were relaxed, 'pop-up' rides restarted. These were the brainchild of our secretary Andy Henderson. Any registered leader can add a ride to the website for any day of the week. Initially limited to six riders, because of the rules, members had to sign up in advance. Leaders then had total freedom to make them long, short or medium, fast or slow, any starting point and to any destination. They proved popular with both riders and leaders and several new leaders came forward. 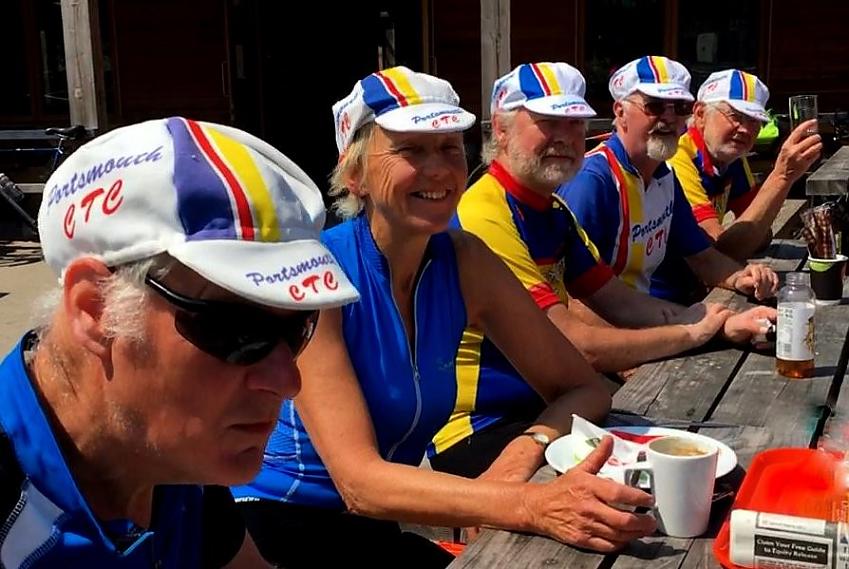 Members of the group in club kit. Joy is second left with secretary Andy Henderson on her left

What kind of rides and activities does the group put on nowadays?

Our rides cater for most abilities, from easy rides (20 miles at a modest pace) to moderate (all day 50–60 miles at moderate pace) to longer (all-day rides up to 100 miles, pace a bit faster).

Pre-pandemic, our Wednesday rides were becoming too large: sometimes up to 40 riders would turn up. Although victims of our own success in attracting new riders, this was difficult to manage, both on the road and at coffee stops. One major effect was that fewer and fewer leaders signed up to lead them. The pandemic gave us the time to work out a solution. All rides are now on the 'pop-up' principle: rides are added to the website as and when a leader wishes. The leader decides how many riders they are confident to take and is no longer daunted by the numbers.

Wednesday rides are a particular category and are managed to match ride and riders. Patterns are forming and we now regularly have two or three rides each Wednesday for different abilities and tastes. Pre-pandemic summers, Monday was the only day without regular rides, but generally, Wednesday tends to be the most popular. We also have rides most Tuesdays and Saturdays, as well as Thursday evening pub rides in the summer.

Traditionally, faster rides were on Sundays leaving from Cosham and regular rides on Wednesdays and Saturdays left from Spring Arts Centre in Havant. However, now the ride leader chooses the starting place accordingly and publishes the information. Havant, however, is still the most regularly used.

Some of our many awards given out at our annual ceremony

What other activities or events do you offer?

In addition to our brilliant programme of rides, we also offer winter club nights twice a month (October to March) in a local hall. Usually we have a speaker (generally but not always cycling-related), or sometimes a quiz or an interactive evening, such as turbo challenge on a static bike, or a book or film evening.

We  also have a Christmas lunch that includes a ride, an annual presentation lunch and awards ceremony and, as you know, we recently celebrated our 95th birthday with a party and a belated awards ceremony.

Several members are also keen Audaxers. These may be fairly local (for example Winchester CTC's Watership Down) but they are often further afield and can include Paris-Brest-Paris and London–Edinburgh-London.

How many regular riders do you have?

Numbers have not yet returned to those before the pandemic and the restrictions affected numbers. Even so, over the past year from October to June, we offered 128 rides with 98 different riders. About a third of our members are women, who are regular riders within all the categories of ride. Four committee members are women, including the President and treasurer.

How many volunteers do you have to run the group?

We have lots of wonderful volunteers to help organise things, including ten committee members, 21 current different ride leaders and those who perform other tasks, from the auditor to the person who runs the Christmas lunch to the all-important tea-makers. We also produce our own magazine 'The Pedal', which has an editor and distribution manager. 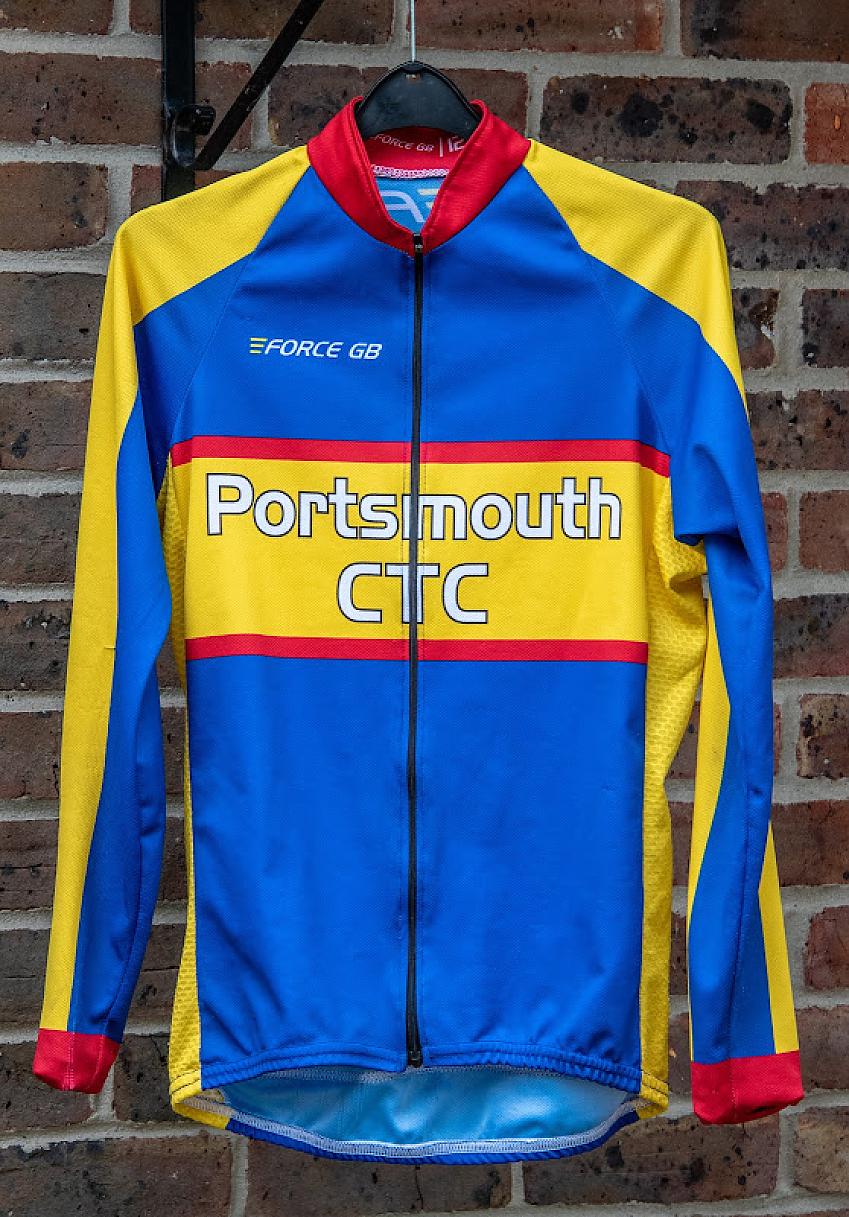 Do you have a club kit or dress code?

We have club jerseys in our colours of scarlet and gold and we've updated them in the last few years. The President has a ‘Chain of Office’ made from a bicycle chain!

What do you do to attract new members to the group?

Most members come through our excellent website or personal recommendation. Pre-Covid, Andy Henderson ran a 'Cathedral Challenge' to attract new members. These started by short easy rides and attendees could progress to a Bronze (Portsmouth cathedral), a Silver (Chichester cathedral) or a Gold (Winchester cathedral) challenge.

What is the group most proud of?

Being friendly and welcoming! And still around after nearly a century providing laughter, fun, exercise and companionship through cycling to the people of Portsmouth and the surrounding areas.

What’s the strangest thing that’s ever happened on a group ride?

We have an annual award for 'Wally of the Year'. Examples include:

We once got mixed up in a police helicopter chase out in the country. An unknown penny farthing rider had just pulled out in front of us, but couldn’t stop downhill at the road block, and we saw him fall off backwards.  Expecting the worst, we were amazed to find he was unhurt, standing up, and in traditional dress with (unbroken) Sherlock Holmes pipe. Said the policeman: “You didn’t see half of it - as he fell, he stuck his foot out to protect the bike as it hit the ground”.  We must have looked suitably gobsmacked, so he responded: “Well, I’ve been teaching Aikido for 35 years, so I should know how to fall”.  I have a picture, including police car, to prove we weren’t dreaming...

Does your group want to feature in 'Meet the Group'? If so, please get in touch.

And if you know an outstanding Cycling UK volunteer who deserves recognition for their efforts enabling more people to cycle, consider nominating them for a Going the Extra Mile award. We will be featuring all our recent award winners at our forthcoming virtual Volunteer Celebration on Saturday 9 October.