Big Bike Revival at the Windrush Project in Oxfordshire
By Anonymous
Monday, 8 July 2019

Now in its fifth year, the Big Bike Revival aims to get anyone and everyone to cycle more with a series of activities and services across the country, providing cycle checks, maintenance workshops, cycle training, led rides and more.

To celebrate this year’s BBR, the Windrush Bike Project, a social enterprise that helps people from all walks of life to make everyday journeys by bike and learn about bike mechanics, held its first female-only event aiming to empower women to cycle more in the West Oxfordshire area.

Kath Cochrane, director of finance and development at Windrush Bike Project, is passionate about the environment and the positive impact of cycling compared to driving.

As a National Standards Cycling Instructor, Kath planned a cycle route around local paths that women could use to help build their confidence away from traffic. Kath also pointed out other cycle routes and reduced traffic zones across Witney.

The ride helped participants to explore different terrain, road positioning and crossings to teach the correct safety techniques and increase confidence in independent cycling. The ride finished back at the project’s workshop with tea and cake before the puncture party began.

Windrush Bike Project decided to host a women-only event because in the 2018 Big Bike Revival report, more women than men reported ‘cycling in traffic’ and ‘lacking confidence’ as barriers to them cycling regularly. Additionally, Department for Transport statistics showed that in 2017, men made three times as many cycle trips as women.

By increasing women’s confidence on their bikes, Windrush Bike Project is trying to help women in Witney to use their cars less and cycle more.

Learning to fix a bike

Kath commented: “You want to use your bike to be independent, if you have a puncture, you pride yourself on hopefully being able to fix it and carry on your cycle.”

Cycling UK commissioned a YouGov survey to find out more about barriers to cycling and when people learned to ride. The survey identified that 47% of people in the UK are not confident in carrying out basic repairs like fixing a puncture. However, 61% wanted to learn rather than pay a professional, so Kath decided to teach those skills that participants would find useful.

“I think because I’m new to understanding how to fix things,” said Kath, “I want to share the tricks and tips to get people on their way. There is nothing scary about it, especially changing a tyre!” 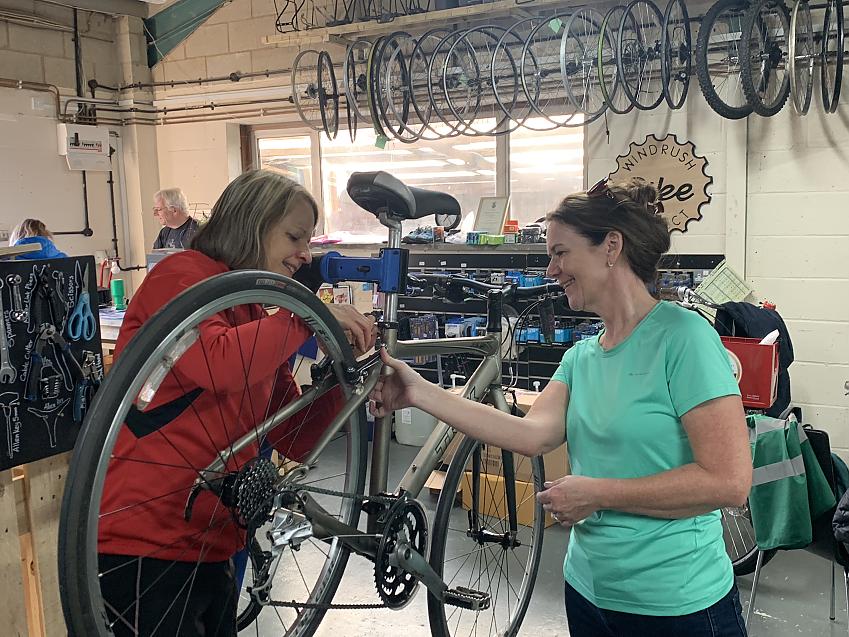 At the event, Kath showed the group how to repair a puncture, making the process streamlined and simple while she separated the inner tube from the tyre and held them aloft for the whole group to see.

Kath stepped back to let participants have a go, with some trial and error. She helped two sisters Yazmin and Joni learn the best way to reattach the newly fixed wheel.

Joni uses her bike to get to and from sixth form. She said: “It’s great, it’s free and I can have more money to spend on other things instead of the bus all the time.”

Joni’s sister, Yazmin, who has a new job in Oxford, said the workshop was also great for spending time with her sister. “This is my second time at Windrush. I came on Saturday too. I knew that Joni would enjoy it and it means we get to spend time together now and feel more confident on our bikes together.” 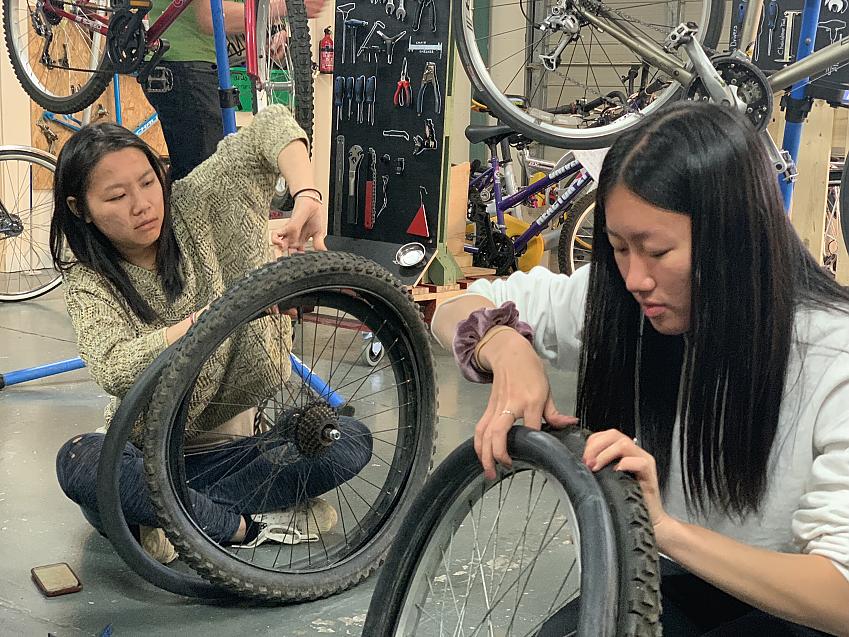 The Windrush Project is hoping that its series of female-only led rides and bike maintenance sessions will help women feel more confident and empowered on their bikes, encouraging them to transition onto two wheels for their shorter journeys around the local area.