In mid-April, we launched the national Space for Cycling campaign in partnership with Cyclenation groups across the country. Our new interactive map shows where councillors have signed up so far, and Newcastle leads the way, outside London.

Using easy-to-use messaging tools provided by CTC and the London Cycling Campaign, over 12,000 people have sent messages to local councillors across the country.

The map displays councillors who responded positively to the question: "Will you support space for cycling and seek the funding to make it happen?"

If you're a councillor and you've not already had a chance to respond, let us know here and we'll make sure you are registered on the map (though updates will not appear immediately). 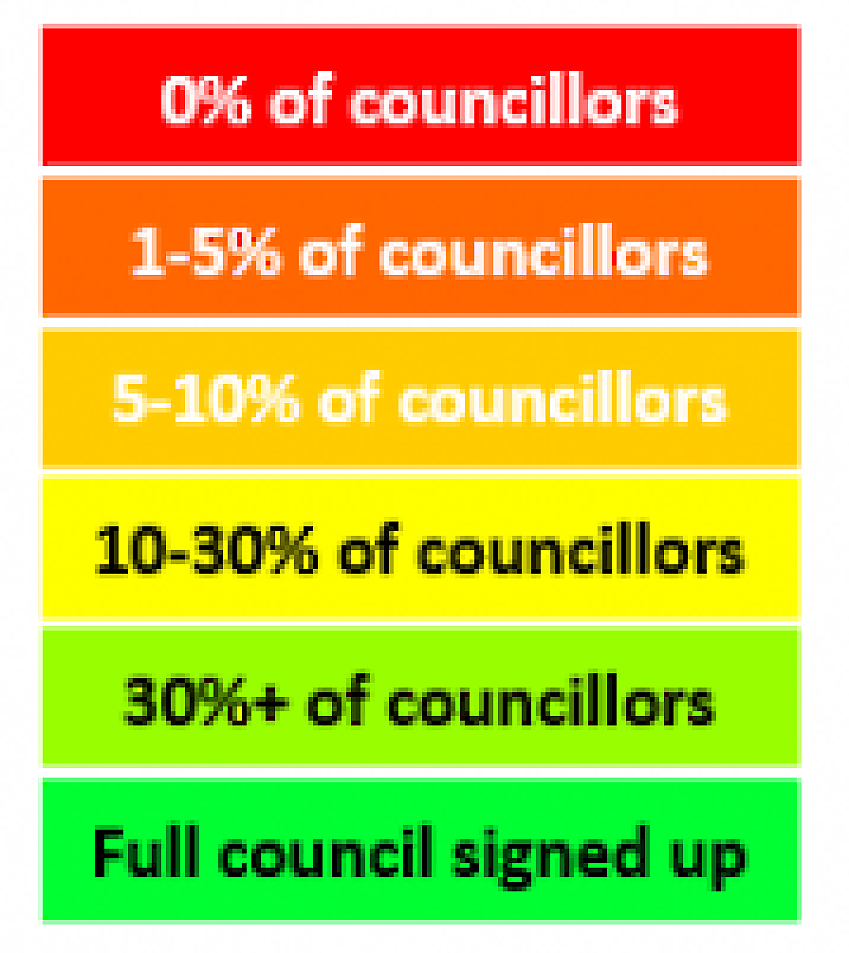 Can't see the map, or want it full screen? Make it bigger!

So far over 270 Councillors outside of London have signed up, with more coming in every day. The green and yellow areas on the map show local authorities with the highest support. City-areas with larger and more active campaign groups are currently topping the chart. The London Cycling Campaign did a superb job in ensuring that 43% of London borough councillors signed up. Outside of London, Newcastle and the the Greater Manchester councils have high levels of support.

At the time of writing, the top eight areas are:

KatjaLeyendecker, chair of Newcycling, Newcastle’s local cycling campaign : “Newcastle, for once, is top of the league, and for a good reason. We at Newcycling are hard-liners, not one for compromising, and it would be a rare occasion we congratulate our councillors – but this must be one. Over a third of our councillors have supported the six Space for Cycling principles to date – and by doing so, Newcastle is the leading city outside London. It feels good when you see a long campaign effort pay dividends. A national campaign like Space for Cycling has a good element of healthy competition to it too. Perhaps Newcastle councillors would now like to think about adopting Space for Cycling’s cycle-friendly design principles at full council - and be the first council to do so?”

Of course, pledging political support is not the same as providing high quality infrastructure. Cambridge and Bristol are already strides ahead in their provision of actual and planned-for cycle networks.

Nonetheless, the aim of the Space for Cycling campaign is to make the cycling public, and the cycling vote, visible to local decision-makers. Most roads in the UK are controlled by local authorities, so securing the support of councillors is key to improving street layouts and making space for cycling.

The next stage is to secure consistent levels of funding: £10 per person per annum rising to £20 pppa. National government will need to match their fine words with cross-departmental funding from transport, education and health budgets.

Of course, this national picture could, and we hope will, change as more councillors sign up. If you haven’t written to your councillor yet, help us turn this map from red to green.

Afterword: The map only includes councillors from local authorities with Highway powers. We are very grateful to all the District and Parish Councillors who have also pledged their support for Space for Cycling.