Research by Cycling UK shows that some councils in England are investing 170 times more per head on active travel than others. It's time for an end to the inequality.

With 143 councils in England holding elections tomorrow, Cycling UK has released data revealing a huge variation in active travel spending by local authorities across the country – from £34 a year per head of population to just 20 pence.

The figures, obtained by the UK cycling charity through Freedom of Information requests, detail spending on active travel schemes from both core funding and one-off bids and grants. Not every local authority has responsibility for highways, and with that control of active travel spending, but to date, 59 of those who do have provided full or partial information. Although the requests covered the previous four financial years, Cycling UK is focusing on the figures from 2020-21 as the data is more complete for this year.

In 2020-21, the average spend across the councils that responded was £7.65 per head, of which £2.58 was from core funding. However, five local authorities (Kingston upon Thames, Salford, Waltham Forest, Stockport and Leicester City) spent or estimated spending more than £20 per head, while three (Redcar and Cleveland, Telford and Wrekin, and Hillingdon which is represented by the Prime Minister Boris Johnson in Parliament) reported figures of less than £1 per head.

Over the whole four-year period, four local authorities (Bradford, Bromley, Coventry and Hillingdon) reported spending none of their core funding on active travel, while only one (Sutton) said it had not received any grants.

Spending money on cycling and walking is not about party politics, it is about improving quality of life for everyone

Duncan Dollimore, Cycling UK’s head of campaigns, commented: “Spending money on cycling and walking is not about party politics, it is about improving quality of life for everyone. If you look at who controls the four councils that devoted most core funding to active travel, you find all three main political parties represented.

“What these figures show is that while some councils are doing a good job of investing in active travel schemes, both from their own funds and through seeking grants, other parts of the country risk being left behind. We need more equality in active travel, which is why our local election manifesto asks every local authority in England to move up the gears and invest more in cycling and walking.”

Cycling UK is asking people in regions where elections are taking place tomorrow to let their candidate know they want them to pledge to support higher investment in active travel, using an online action.

“We have seen our active travel manifesto asks being reflected in parties’ own manifestos ahead of the elections in both Scotland and Wales,” Dollimore said, “so it is important that the message gets through in England too.”

A summary of the top and bottom spending local authorities is given below. The full data obtained to date can also be downloaded in PDF format. 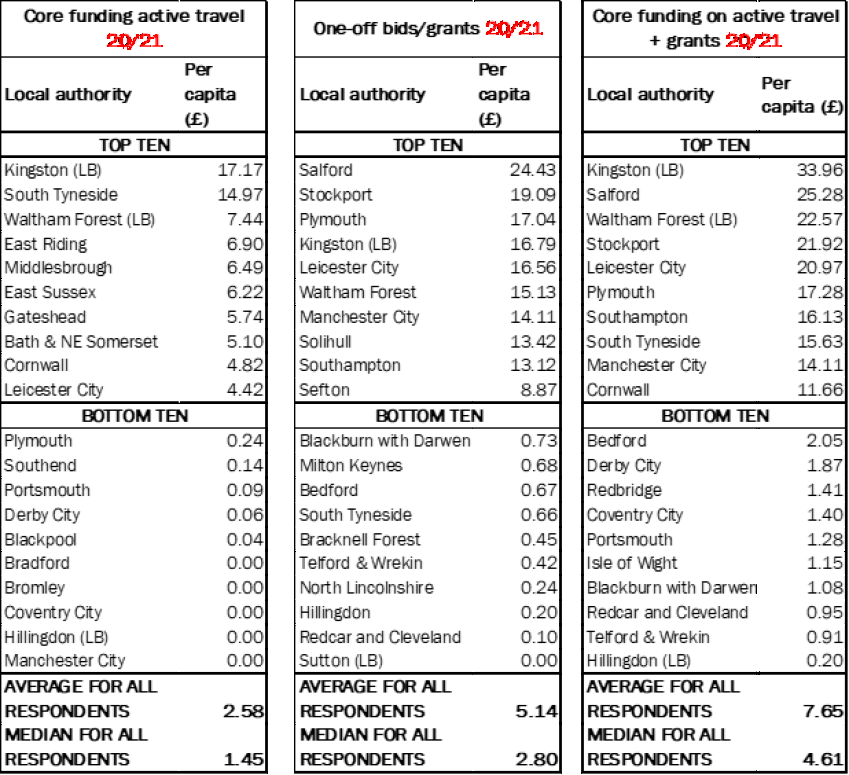