More joined-up thinking within government could "reap far greater rewards for cycling across the board”, Cycling UK’s chief executive Sarah Mitchell has told members of the House of Lords

Recently appointed chief executive Sarah Mitchell was one of six experts invited to give evidence by video call to the National Plan for Sport and Recreation select committee on Wednesday, 27 January.

Her call for partnership work was echoed by other outdoor recreation groups who also stressed the need to put promotion of sport and physical activity at the core of government policy. While Cycling UK represented the views of cyclists at the evidence session, the charity also formed part of a united front with walkers and climbers, represented by The Ramblers and the Outdoor Industries Association. Representatives from all three groups made statements and answered Lords' questions.

Andrew Denton, chief executive of the Outdoor Industries Association, said in summary that the UK’s post-Covid-19 recovery needed to provide sport and physical activity opportunities for everyone. “Without a healthy nation, we will never have a healthy economy and we are going nowhere fast,” he said. Gemma Cantelo, head of advocacy and policy for The Ramblers, ended her contribution with a call for a “focus on place across all levels of government”.

In her evidence, Sarah welcomed the Government’s Gear Change report published last summer but said its bold vision for a travel revolution across England needed to be adopted across all Government departments.

She said: “There are some great commitments in there but a lot of those commitments are connected to other government departments where there perhaps isn’t the same level of commitment as there is in the home department, of the Department of Transport.

“I think there could be huge benefits and additional gains from having input from education around cycle training for young people, health policy obviously and environmental policy around air quality. There is a great opportunity there if only we could get that cross-departmental working better.” 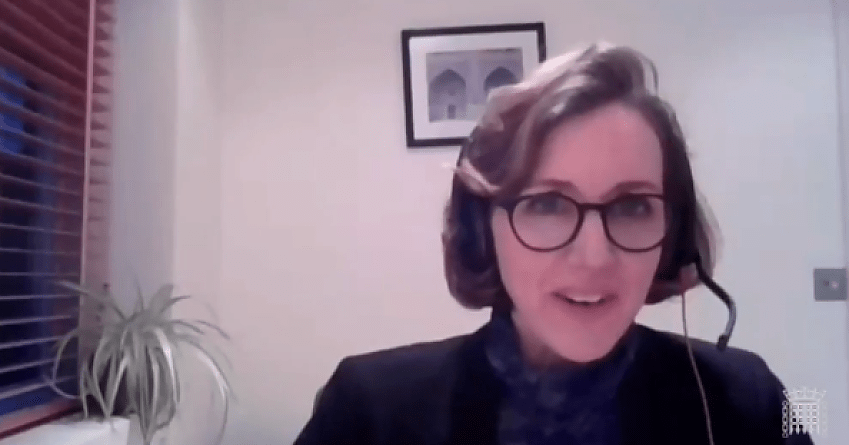 I think there could be huge benefits and additional gains from having input from education around cycle training for young people, health policy obviously and environmental policy around air quality. There is a great opportunity there

A flashpoint in the hearing came when one member of the committee departed from questions around providing more opportunities for sport and recreation across the nation to raise what she described as “one of my bugbears”: pavement cycling.

Baroness Estelle Morris, who prior to entering the upper house was an MP for Birmingham Yardley for more than a decade, asked Sarah what could be done to ensure pedestrians felt safe from those cyclists who flouted the law by riding on the pavement and claimed there was a risk of the public ‘turning against cyclists” if something wasn’t done to tackle the issue.

In response, Sarah Mitchell said she didn’t see a conflict between cyclists and walkers and turned the question around to focus on the need for safe space for everyone.

“We would always call for there to be separate segregated cycle lanes, so that cyclists have somewhere they feel safe to cycle, particularly those who would feel nervous about being on busy roads encountering traffic,” she said.

“We can’t just rely on infrastructure, there has to be some emphasis on behaviour change. What are the practical or psychological barriers for people with starting on exercise or cycling for the first time?”

Here Sarah pointed to the work of a number of Cycling UK projects, the Big Bike Revival, the Cycle for Health pilot scheme and the network of Community Cycle Clubs which run activities and support lasting change in communities. She told the committee that half of the participants in Community Cycle Clubs were women and 53 of the projects were located in deprived areas where there may be additional barriers to cycling.

Continuing on this theme, she said the charity was committed to increasing diversity in cycling among its participants, staff and volunteers, and confirmed Cycling UK will be publishing an action plan around diversity later this year.

Committee members, who included Paralympian Baroness Tanni Grey-Thompson and television personality Baroness Karren Brady, asked a series of questions during the hearing to senior figures in organisations involved in sport and outdoor activities. Prior to the Cycling UK evidence, representatives of Parkrun and the Football Foundation took part in the first part of the two-hour meeting.