The Adventure Syndicate inspires schoolchildren to 'Match the Miles' across Scotland

The Adventure Syndicate inspires schoolchildren to 'Match the Miles' across Scotland

How do you inspire teenagers to cycle more? Lee Craigie and Jenny Graham from The Adventure Syndicate cycled from Inverness to the Scottish Borders and challenged schoolchildren and teachers from Galashiels Academy to 'Match the Miles'.

The Adventure Syndicate, a Cycling UK affiliated group that aims to inspire women and teenage girls, set off on a 'Match the Miles Challenge' on Monday.

Lee Craigie and Jenny Graham rode 220 miles off-road from Inverness to Galashiels, in the Scottish Borders and arrived at the school on Wednesday afternoon. 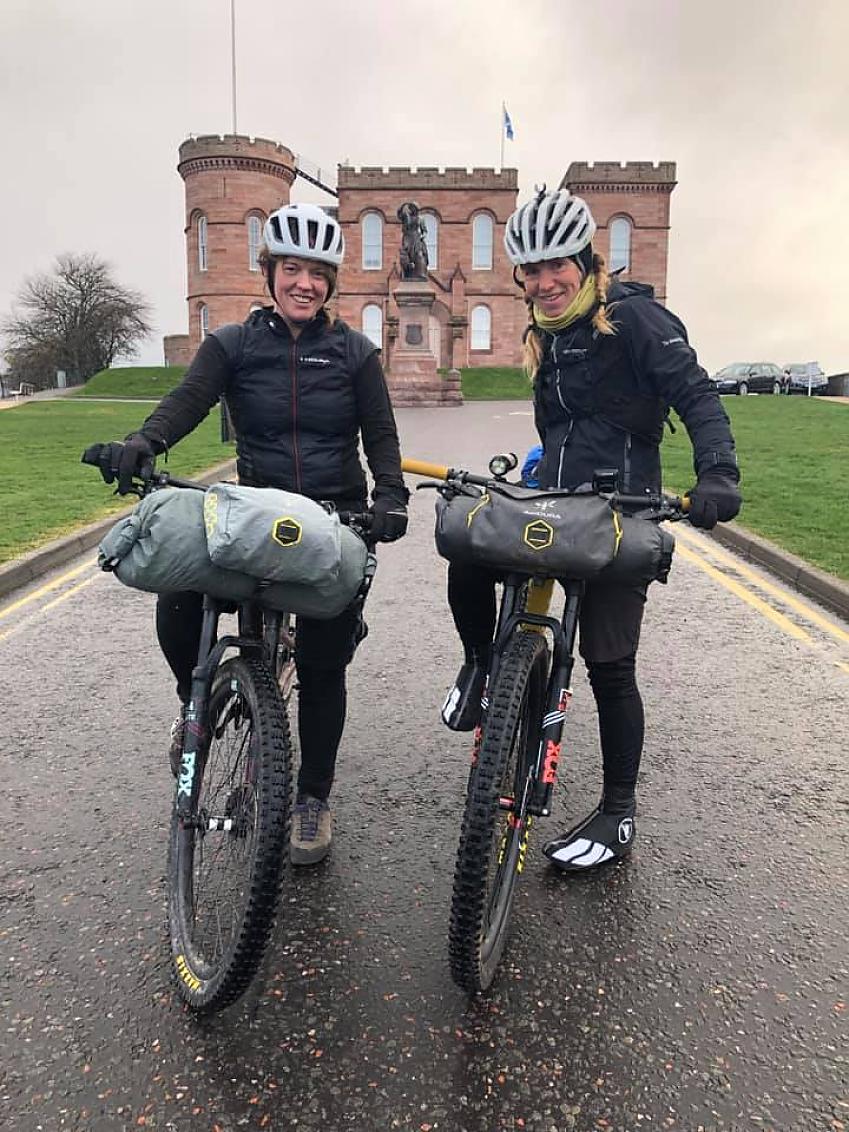 Jenny Graham and Lee Craigie set off from Inverness

At the same time, back in Galashiels, the pupils and teachers of Galashiels Academy had to match Lee and Jenny's miles with indoor turbo sessions and after-school rides. The school put on extra bike club sessions and went out on an eight-mile ride along the Tweed.

Galashiels Academy teacher Nick Rodwell has been working hard over the last few years to inspire more children to cycle. He said "During Match the Miles, we had over 100 children involved. They were a mixture of years, S1 to S3 (11-15 year olds)."

"When we first started doing biking at school it was predominately boys who wanted to ride. It's so important to give the girls an opportunity, so we set up Wednesday and Friday after-school bike clubs. Jenny and Lee came to talk to the school and 10 more girls joined the club." 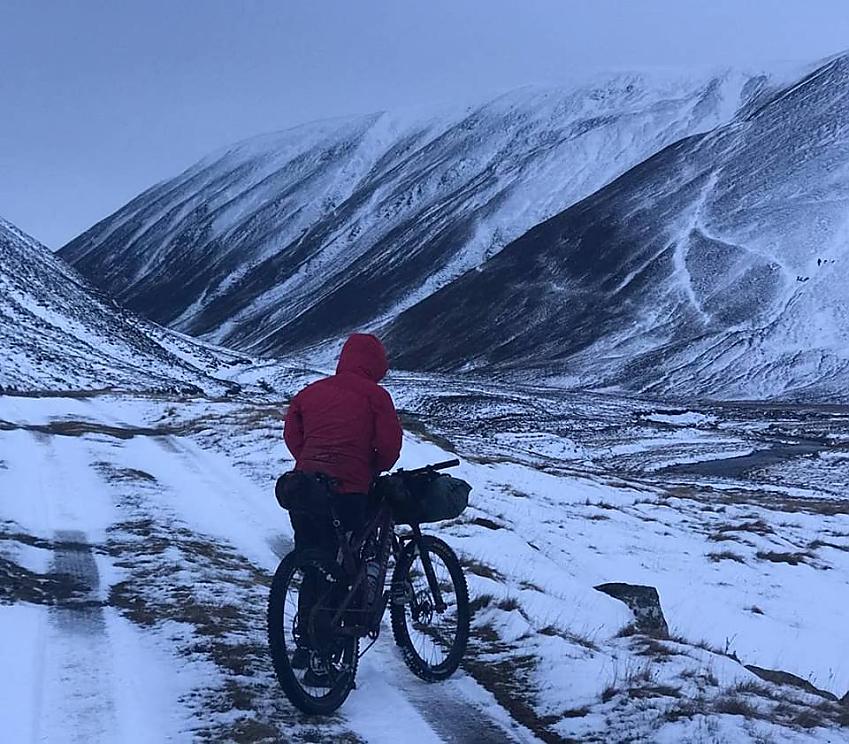 There was snow and icy paths.

Lee and Jenny's journey started off with good weather, but Storm Gareth had them seeking shelter on woodland paths. 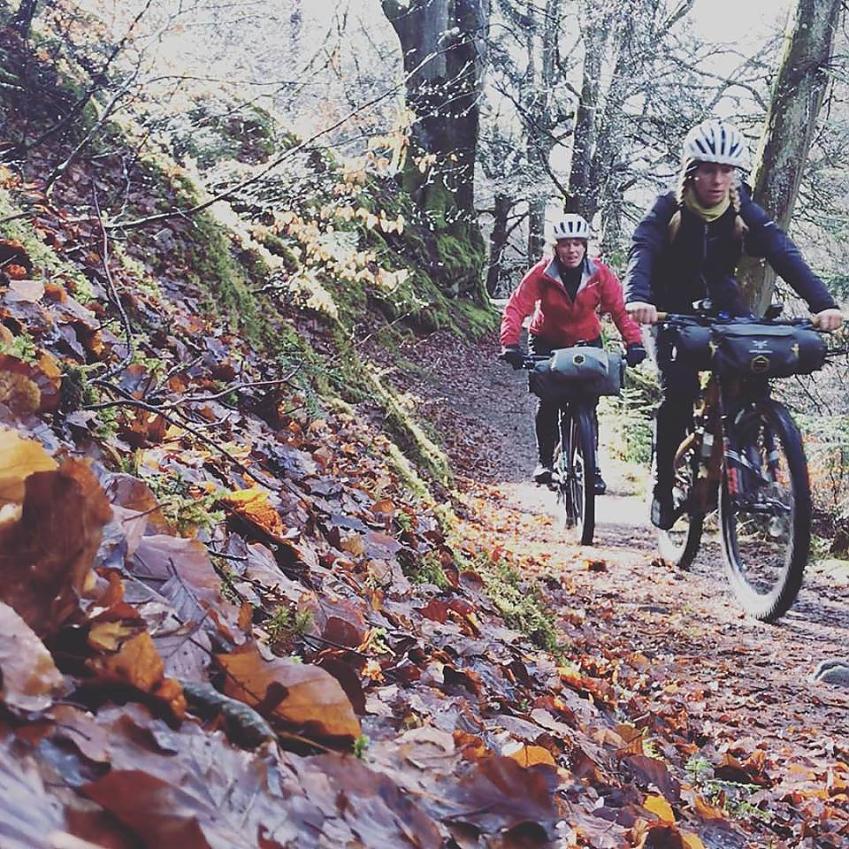 Getting to the finish line

Jenny Graham said: "When we arrived, we got a sense of how much enthusiasm and drive the whole school had. Teachers and staff were speaking like a team. Some of the students even joined in with the staff spin sessions – I loved how this brought the whole school together."

The Galashiels Academy team collectively managed to clock up 720 miles.

Funding and a film

Cycling UK is working with the Adventure Syndicate to help more girls and young women start cycling and bikepacking activities, thanks to a £10,000 grant from Transport Scotland.

We’re delighted to be supporting the Adventure Syndicate to inspire girls and young women in Scotland to push their boundaries through cycling.

Suzanne Forup, Cycling UK Head of Development Scotland, said: “We’re delighted to be supporting the Adventure Syndicate to inspire girls and young women in Scotland to push their boundaries through cycling. Lee and Jenny are fantastic role models who are helping girls to discover that riding a bike is an exciting, adventurous and fun activity through which you can explore Scotland’s beautiful wild places.”

The adventure will be made in to a short film that will be shown to schoolchildren, and taken on a roadshow through Scotland this summer to inspire communities to get cycling.

The next step bikepacking and bothy adventures

The Adventure Syndicate will take girls from the school on a bikepacking adventure later this month, helping them to challenge what they are capable of, build confidence and independence. The girls will learn mountain biking and bikepacking skills – including an overnight stay in a bothy.

"Everyone at the school is super hyped about it - so are we," said Jenny. "Taking young people into the wilds for their first expedition is a special position to be in. It's like planting seeds into the souls of future adventurers - how cool is that!

"One of the students told me that her parents had been trying to get her to cycle for years but she thought it would be boring. But now she has friends and is off on an adventure she’s super excited about it. It just goes to show the power of having a group of like-minded buddies around."

Nick Rodwell said: "Parents have been very positive. There's a bit of apprehension about the bothy trip from the girls as they might not have mobile phone signal, but it's more excitement and anticipation. Now the boys are asking when they can go, so we are thinking about maybe running more school bikepacking trips to somewhere like the Cairngorms."

Girls will also have opportunity to work with Aneela McKenna, a mountain biking expert and one of Cycling UK’s 100 Women in Cycling 2018. 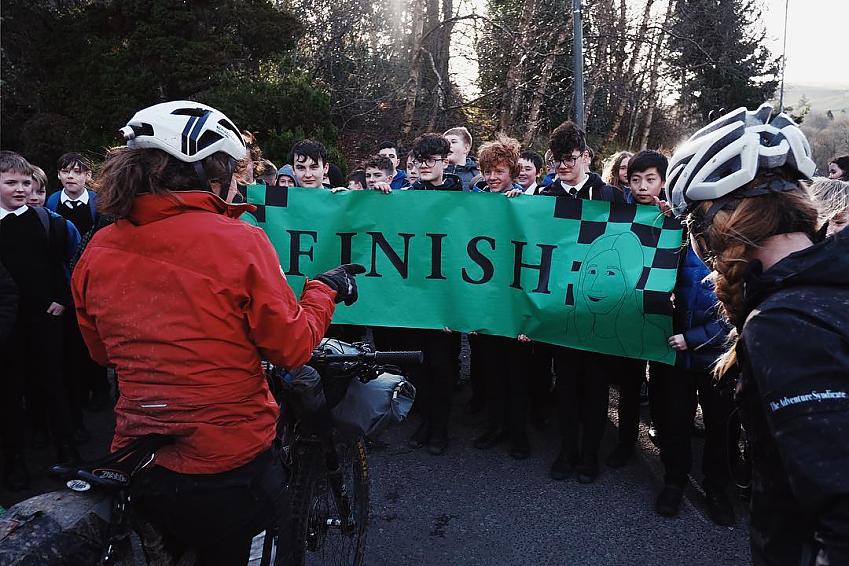 Jenny Graham at the finish line

'Match the Miles' is running again from 13-19 May and this time it's not just for schoolchildren. Clubs, teams, workplaces, schools, groups or even individuals can join in. If you'd like to take part all you have to do is sign up to 'Match the Miles'.

Find out more about The Adventure Syndicate