Alaina Beacall after completing the Coast-to-Coast
By Tony Upfold
Monday, 15 May 2017

Alaina Beacall sets off on a 4,000-mile bike ride from the Arctic to the Adriatic at the end of the month – not a bad challenge for someone who has only just discovered the delights of cycle touring!

Alaina has already ticked off Land’s End to John O’Groats and the Coast-to-Coast route on her ‘to do’ list since joining Cycling UK Merseyside last summer. Now the 28-year-old is about to embark on an exhilarating, self-supported solo trip from the northern tip of Norway to the coast of Croatia. And one of her biggest quandaries is carrying the right kit for temperatures which could range from zero to 40°C as she chases the sun south!

Alaina starts her epic adventure on 31 May in Nordkapp (North Cape), a Norwegian landmark which is 700 miles inside the Arctic Circle and popularly referred to as the northernmost point of Europe. She will then pedal an average of 100 miles a day, camping each night, before reaching the Mediterranean coast at Zadar, Croatia, in mid-August.

Alaina, who hails from the Wirral, said: “I’m a new lover of cycle touring and it was through joining Cycling UK Merseyside last summer that I was able to increase my mileage and make friends through cycling.

“I got my first bike for commuting purposes, to make the 12-mile round trip from home in Sefton Park to Aintree Hospital where I work as a doctor. It was my dad who suggested I ride from Land’s End to John O’Groats. I joined the Merseyside group to get used to long days in the saddle and rode End-to-End solo last September, averaging 70 miles a day."

I’ve clearly been bitten by the touring bug, though, and wanted more. I called up the EuroVelo website and felt this wave of inspiration wash over me.

“I’ve clearly been bitten by the touring bug, though, and wanted more. I called up the EuroVelo website and felt this wave of inspiration wash over me as I looked at all the long-distance cycling routes that have been designated across Europe," Alaina said.

“In December I decided to go on this ride from the Arctic to the Mediterranean – or the Adriatic part of the Med, to be more precise. It isn’t an established long-distance route, but one I have plotted myself.

“I’m taking a semi gap-year from working as a doctor before choosing what branch of medicine I will specialise in, so I’m going on this ride of a lifetime while the opportunity and time exist. I’m excited and apprehensive about the trip in equal measure!”

Nordkapp is in the land of the midnight sun at this time of year, so the temperature should not get too cold. Alaina said: “The daily average temperature up there in June is 4°C, and it shouldn’t drop much below freezing at night. There’s always the wind-chill factor, however, so I’m hoping it doesn’t get too stormy."

I’m going on this ride of a lifetime while the opportunity and time exist. I’m excited and apprehensive about the trip in equal measure!

“The ride should take eight to ten weeks in total. I’ll give myself a buffer of a few days every couple of weeks to allow for rest, technical issues and so on – taking rest days in major cities such as Bergen and Oslo," Alaina said.

“There will be several occasions when I’ll be cycling for two days at a time without passing through so much as a village. It is definitely a mental struggle cycling alone, and with a time limit. I’m a vegan too, so finding the right food could be difficult in some of the remote areas if I’m only passing one shop in the course of a day or two.”

Alaina, who will be meeting up with a friend when she reaches the River Danube, has obviously been training hard. She cycle-camped her way from Liverpool to Kent to visit friends in Canterbury – covering 220km (137 miles) on one of the days – and has just been hill training in Majorca.

In her final couple of weeks back in the UK, she plans a hilly Audax and more practice rides carrying heavily-laden panniers before leaving for Nordkapp – a journey which involves two flights and a coach trip, accompanied by her bike, a Genesis Equilibrium 20. 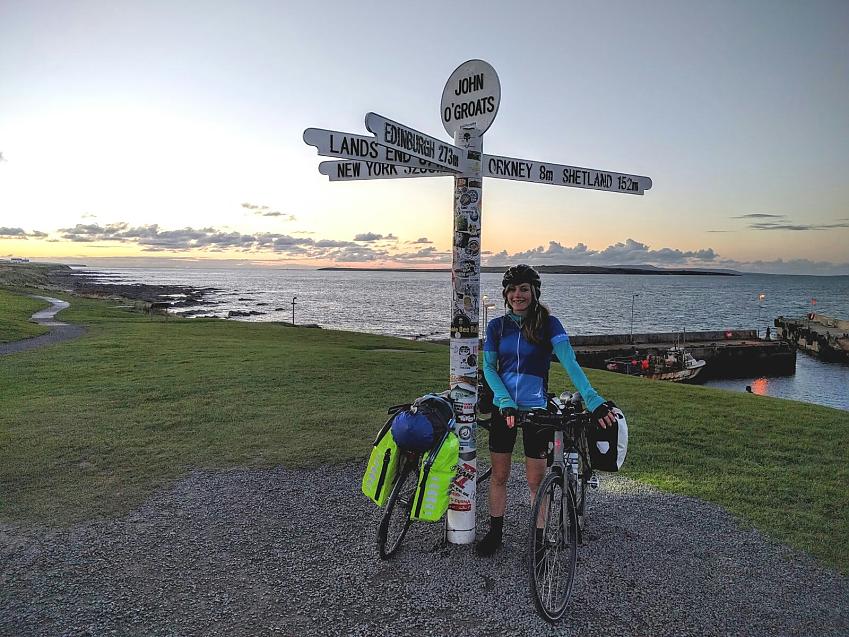 She added: “My training is going fine, although there’s a lot less time than I’d like before having to set off. Arranging all the logistics of the trip has taken so long – from organising clothing, kit and the route to sorting out ferries and campsites, when I’m not wild camping.”

Alaina admits there is a safety worry cycling alone – especially as she was the potential victim of an abduction attempt on a recent holiday with her mum to Sorrento, in Italy.

She was out cycling on her own in a forest on a hillside when two men in a Land Rover passed her slowly a couple of times. They then disappeared from sight, but Alaina came across their dog whining in a ditch, which they had clearly left there in the hope she would stop. She didn’t – and got out of there fast.

Alaina said: “I will be live tracking my ride and avoiding the smallest, most remote trails. I’ll also be writing a blog on my website so people can keep in touch with my progress.

“I’m using the ride to raise funds for Hand in Hand for Syria. It’s a charity particularly close to my heart, as one of my best friends is Syrian and still has family in Aleppo.”

Alaina will be well on her way through Scandinavia by the time Cycling UK’s Women’s Festival of Cycling gets underway at the start of July - but hopefully her incredible journey will inspire more women to get involved.