A woman who suffered serious brain injuries after a freak fall is defying the odds to take part in a marathon charity cycling event. Karen Brooke is being helped by Cycling UK-award winners Streetbikes as she prepares to raise money for the air ambulance service that saved her life.

Karen was an avid cyclist before a devastating accident two years ago when she slipped on ice outside her Elland home, near Huddersfield. She was leading her horse who, startled at her fall, kicked out – hitting Karen on the side of her head and causing life-changing injuries.

But the life-long Huddersfield Town football supporter has signed up to take part in the eighth annual 'Pedal For Pounds' – a 260-mile charity bike ride from 2-6 May on the ‘Wagner Way’ from Dortmund, Germany, to Huddersfield.

Former Youth Team Leader Karen, who can currently only walk short distances with a stick, is hoping to complete 20-30 miles of the route each day on a tandem provided by the Streetbikes community cycling project, who are also providing co-riders for her throughout the journey.

The 51-year-old is training hard for what will be a huge challenge – going on her home static bike every day, training with Streetbikes each week at Spenborough Running Track, as well as having regular physiotherapy and swimming sessions.

Speaking ahead of a tandem training ride with Streetbikes Director Gill Greaves, Karen said: “I used to do a lot of cycling and had ridden three Pedal For Pounds events before the accident, and my brother did it last year. I wanted to take part again to raise money for Yorkshire Air Ambulance and to give myself a challenge."

I have to retrain my brain to do it all again, and cycling uphill in particular is very, very hard – but my determination will get me there. I will do it.

“I’m really grateful for all the help and support Streetbikes are giving me. The training is hard work, but it is going well and I am determined to do as much of the ride as I possibly can. I have to retrain my brain to do it all again, and going uphill in particular is very, very hard – but my determination will get me there. I will do it,” Karen said.

Following her accident, Karen was airlifted in minutes by air ambulance to specialists at Leeds General Infirmary. She suffered two skull fractures and severe bruising and bleeding on the brain. She said: “I was lucky to survive. I had only a slight pulse when Yorkshire Air Ambulance landed and I don’t think I would have made it without them. They saved my life.”

Karen was in a coma for two months and initially suffered personality changes as well as paralysis down her right side. She was transferred to Dewsbury Hospital where she spent a further four months in rehabilitation, learning how to walk, talk, read and write again. Karen was later discharged to her specially-adapted home next door to parents Kath and David.

She added: “When I came home, I had carers four times a day, getting me up, cooking and putting me to bed. But I am very determined and, with lots of support from my family, I have made myself get better so I can do things myself.”

Streetbikes, formed in 2010, won a prestigious Cycling UK award last year for organising the John Radford Memorial Ride and for its work promoting cycling for all ages and abilities in the Kirklees area of West Yorkshire.

Gill Greaves, one of three Directors of the Cycling UK-affiliated community organisation, said: “Karen has been coming to Streetbikes for 18 months. She started trying to ride a trike and struggled at first, then we got her on a tandem. I think it has helped her with her balance which in turn has also helped with her speech.

“Karen is amazing. It is hard for her just to get on the tandem but she has come on so far, which is testament to her incredible determination. Cycling is playing a big part in helping with her rehab, so it is all positive.”

Gill will be accompanying Karen on the ride from Germany to the UK along with Streetbikes colleagues Clare Taylor, Julia Woodhead and Amanda Sowerby.

Pedal For Pounds is part of the ‘Keep It Up’ Campaign between Huddersfield Town FC and Yorkshire Air Ambulance, which has generated more than £1.4m since its launch in 2009, with monies raised split equally between HTAFC’s Academy and the rapid response emergency service charity.

Karen is amazing. It is hard for her just to get on the tandem but she has come on so far, which is testament to her incredible determination. Cycling is playing a big part in helping with her rehab, so it is all positive.

Although the main Pedal for Pounds 8 ‘Wagner Way’ bike ride sponsored by Made by Cooper has sold out, supporters and cycling fans are being invited to join the last leg of the route – the 80-mile ‘Hull to Home’ ride back to Huddersfield on Saturday 6 May.

Yorkshire Air Ambulance serves five million people across Yorkshire and carries out over 1,250 missions every year. Partnerships Manager Katie Collinson said: “Karen has been through so much over the last few years and is a real inspiration to us all with her grit and determination to not only learn to walk and talk again, but now to join in this epic bike ride.”

Karen will be warming up for her adventure by taking part in this year’s John Radford Mixed Ability Memorial Ride and Cycling Festival at the Spenborough Track on Saturday 29 April – three days before departing for Germany with Gill and the Streetbikes team.

The Spenborough event is organised in memory of John Radford, a well-loved local cyclist and councillor of what was then CTC, who was knocked off his bike in a road rage incident and spent 15 months in a coma before passing away in November 2014, aged 70.

There will be various family-friendly activities on 29 April, plus rides for all ages and abilities both on the track and on the road. The 20-mile road ride will include part of the route the professional peloton is using over the same weekend during the Tour de Yorkshire*.

Over 200 people have registered for the John Radford Memorial Ride, including 10 visually-impaired riders with tandems, and among those attending will be Kim Leadbeater, the sister of murdered MP Jo Cox. The Spenborough Track will also host the start of the second Jo Cox Way Ride on 26 July. 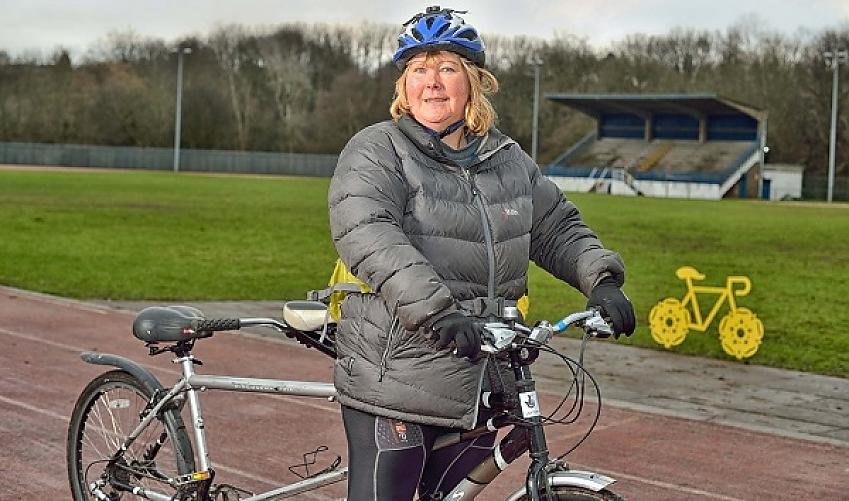