Great Britain’s Paralympians have performed medal-laden heroics in Rio – with their cyclists leading the way. But you don’t have to travel halfway around the world for inspirational stories about inclusive cycling, as our Communications and Media Officer Tony Upfold discovered on Cycling UK’s doorstep this week.

For 30 minutes every Thursday morning, Jonathan Bone leaves his wheelchair to enjoy that feeling of freedom that only cycling can bring.

Watched by Sue, his mum and full-time carer, and with support worker David Chedgey sitting alongside him on an adapted cycle, Jonathan pedals as much as pain will allow on a flat circuit through the beautiful scenery of Alice Holt Forest.

Jonathan is 37-years-old and has a brain injury – and his impairments have increased over the years in adulthood. He has global learning disability, spondylitis and double curvature of the spine, osteoporosis, osteomalacia, Raynaud’s disease, a kidney condition, dyspraxia, and three fractures to his body. He has also suffered several strokes.

But the broad smile on his face said a thousand words during his weekly session with Alice Holt Inclusive Cycling – a ‘Cycling for All’ centre run by a small number of volunteers for the benefit of people with disabilities who wish to enjoy cycling in a safe environment.

Jonathan, who lives in Basingstoke, was one of over a dozen people cycling in the sunshine during the course of the morning at the Cycling UK-affiliated centre on the Hampshire-Surrey border.

His mother Sue said: “We’ve been coming to Alice Holt for several months and it’s fabulous. Cycling is good physically and emotionally for Jonathan. He can get out of his wheelchair and cycle safely, alongside someone, in beautiful surroundings.

“He loves it. It gives him some freedom, a bit of control and autonomy, and a lot of enjoyment. There’s also the exercise element, limited though it is, and it’s good for him to be with the mainstream in a community environment. The woodland and landscape here are magnificent – green is good for everyone.”

Simon Walmsley was another Basingstoke resident who attended the latest Alice Holt session. Simon, who has cerebral palsy and is completely deaf, took the controls of a hand-powered trike while his support worker, Nicki Harvest, followed on a two-wheeler. 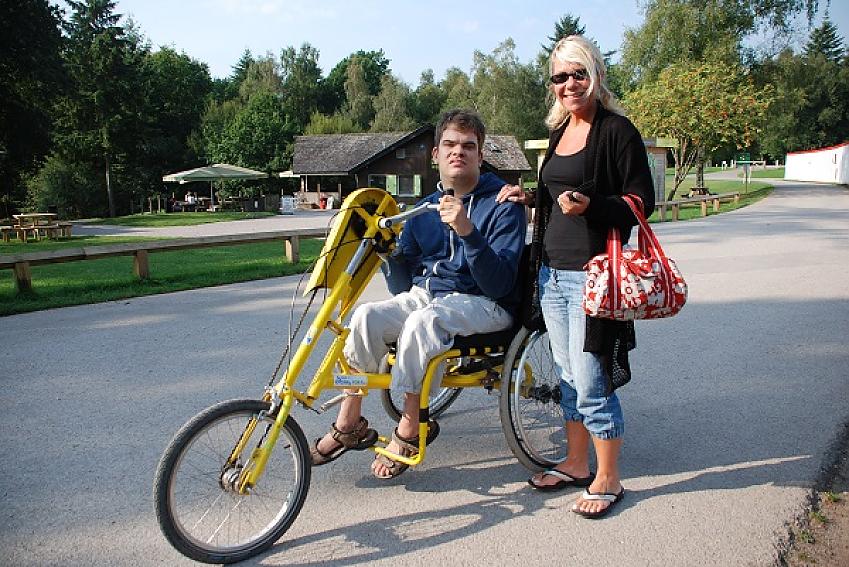 Nicki, from Portsmouth, is also deaf and uses signing to communicate with Simon (they are pictured above). Nicki said: “We’ve been coming here for about five years. It’s really good exercise and helps encourage independence for Simon. When I first met Simon he couldn’t do any signing, but now we can communicate well – usually he wants to ask about lunch after the cycling!”

There are six active volunteers at Alice Holt Inclusive Cycling, all of them cyclists. Lead volunteer and Cycling UK member Peter Jeans has been there virtually every Thursday morning for 12 years, come rain or shine (or occasionally snow).

Peter (77), who lives in nearby Farnham, was manager of pathology services at Frimley Park and Royal Surrey hospitals until retirement, and also had a second career as a local magistrate.

He said: “It’s gratifying to see how much our clients enjoy their visit and how much positive feedback we get – that’s what it’s all about. I’ve been volunteering here for over 12 years, so I must enjoy it!”

Alice Holt Inclusive Cycling has 16 adapted cycles, including rickshaw-style machines for two, tandems, recumbents, hand-powered trikes and a cycle which can carry a wheelchair. There are also a dozen two-wheelers, which can be used by carers and some clients.

Peter said: “The beauty of cycling is that it’s truly a multi-disability sport. No two disabilities are identical, and there are endless adaptions that can be made.

“The Alice Holt fleet has a wide range to make cycling accessible to everyone, and the volunteers help people choose the right bike to match their circumstances and show them how to ride and where to go in the forest.

“The cycles have come from several sources – Cycling UK, East Hampshire District Council, the National Lottery and donations. The biggest problem is getting spares, and prices can be astronomical. Things like a footrest can cost hundreds of pounds, while a wheelchair carrier is anything up to £10,000.

“We have a good working relationship with Alice Holt Cycle Centre here. They do a great job with repairing and maintenance and have access to our bikes when we’re not here, which allows other disabled people to cycle at other times.”

Helping Peter was fellow Cycling UK volunteer Harry Glover, who lives in Frensham. Now 71, former engineer Harry has been volunteering at Alice Holt for two years, having run his own company for 19 years before fully retiring 18 months ago.

Harry (pictured on the left with Peter, below) rides with West Surrey CTC’s Farnham Wayfarers and is no stranger to voluntary work. Both his mother and sister died from multiple sclerosis, so he volunteered as an ambulance driver for the Farnborough branch of the MS Society.

Harry, also a bell-ringer at Frensham Church, said: “To see those who come here enjoy their cycling so much and obtain such great benefits from it gives me immense satisfaction. It makes everything so worthwhile for all of us who work here on a Thursday morning and puts life into sharp perspective. It is a pleasure to be able to help in some small way.”

Howard Robinson, Mel Jones, Glenn Blake and John Tasker are the other volunteers at Alice Holt Inclusive Cycling. Sessions take place every Thursday from 9.30am-12.30pm. The cost is £2.50 per session, with carers riding for free. Peter and his team can also arrange, by prior appointment, special days or events for groups or charities who wish to have exclusive use of the fleet of adapted bikes. 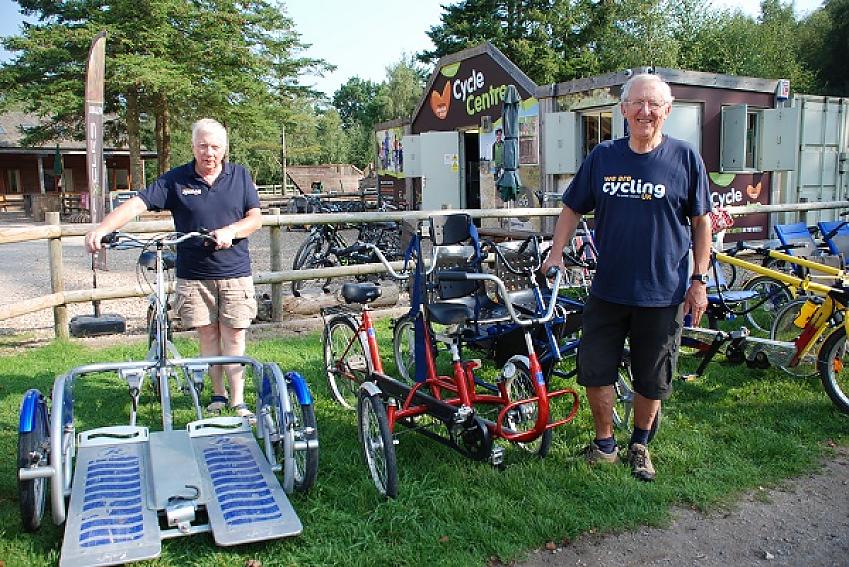