Politicians were given an insight to the world of disabled cycling as the heavens opened at Herne Hill Velodrome this week. Ruth Cadbury MP, Co-Chair of the All Party Parliamentary Cycling Group, was among those invited to a Tea, Tour, Talk and Track session organised by the inclusive cycling charity Wheels for Wellbeing, which is affiliated to Cycling UK.

Several disabled cyclists attended, among them Alan Mendelsohn, who sustained a serious back injury in action with the Army in Lebanon 33 years ago and then suffered from post-traumatic stress disorder (PTSD), but whose life has been utterly transformed since he bought a recumbent trike less than two months ago.

As well as having a chance to try out the assortment of trikes on show and meet some of the people who use them, they were given a presentation by Wheels for Wellbeing Director Isabelle Clement, who explained about the charity’s work in south London to support disabled people of all ages and abilities to enjoy the benefits of cycling.

Isabelle also launched ‘Beyond the Bicycle’ – Wheels for Wellbeing’s manifesto for an inclusive cycling policy in London.

Unfortunately, Tea, Tour, Talk and Track weren’t the only words beginning with T which sprang to mind as Isabelle’s audience tried to shelter from the elements under a gazebo. Tempest might be a bit of an exaggeration, but 'Torrential' certainly fitted the bill as the wind blew and the rain ranged from merely heavy to Niagara Falls proportions.

The end result was that a planned ride along Herne Hill’s residential roads, using Wheels for Wellbeing’s various cycles, was curtailed at the end of the driveway to the historic velodrome, such was the intensity of the rain.

APPCG Co-Chair Ruth Cadbury, Labour MP for Brentford and Isleworth, had been trying out a trike but was soon taking cover under the nearest tree, with all of her fellow riders finding similar shelter of their own.

Disabled people don’t realise the life-changing benefits of cycling until they have tried it. They simply don’t know. There’s an ‘it wouldn’t work for me’ attitude. We want to change that – help them discover cycling.”

Despite the foul weather, the message on behalf of disabled cyclists came through loud and clear. And while the ‘Beyond the Bicycle’ manifesto produced by Wheels for Wellbeing specifically concerns London, it is a wish-list that can be applied throughout the UK.

‘Beyond the Bicycle’ highlights the physical, financial and cultural barriers faced by disabled cyclists in the capital, namely lack of infrastructure, the cost of non-standard cycles (which can be up to £5,000), cycle parking and storage facilities, cycles not being recognised as mobility aids, and the under-representation of disabled cycling in imagery and language. In turn, the charity – a member of the APPCG – calls for better infrastructure, better facilities and better recognition.

The Wheels for Wellbeing policy reflects Cycling UK’s aim to promote, encourage and campaign on behalf of inclusive cycling. It also mirrors Isabelle Clement’s own experiences as a disabled person whose life has been changed by the gift of cycling.

Formerly a member of the board, Isabelle became Director of Wheels for Wellbeing in 2011 – four years after Janet Paske founded the charity.

Cycling sessions with specialist instructors and volunteers are held five days a week at Herne Hill, Catford and Croydon, and last year the organisation supported 1,200 disabled people aged 5-97 who faced significant barriers to exercise, though such impairments as limited mobility, cancer, heart disease and learning difficulties.

Originally from France, Isabelle has been disabled for all of her conscious life after a tumour was discovered on her spinal cord before her first birthday. She came to England in her student years and, in her own words, “it was love at first sight”.

She said: “I felt very connected to Great Britain. As a country it is far more open and accepting about disability. There was an active, campaigning disabled movement and I felt very at ease here.”

Isabelle’s first foray into the world of cycling was not a success. She explained: “When I was 10 my parents started me on a two-wheel bike but it didn’t work. I could walk a lot better, and for longer, back then, but I couldn’t balance on the bike and my feet wouldn’t stay on the pedals, so I just thought I couldn’t cycle and never looked at it again.”

Things changed when Isabelle and her husband Adrian, also a keen cyclist, bought their son his first bike when he was four. She said: “Suddenly I wasn’t in control. I couldn’t follow my son on foot or in my wheelchair if he was cycling outdoors, on the grass or up hills. I thought about an all-terrain mobility scooter but wasn’t keen on it.

“By chance we came across a picture in a magazine of what I now use, a clip-on hand-cycle. I didn’t think of it as cycling, but it did turn my wheelchair into a vehicle. I could go out with my son, keep an eye him and was suddenly active. I’ve never looked back.”

About three months ago I saw a recumbent trike fly past me and I suddenly thought, I have to get one of those. I haven’t looked back since. It’s still all relatively new but it has been a life-changer and has given me independence and freedom again.”

Alan Mendelsohn, who was injured while serving in the Army in the Middle East and also suffered post-traumatic stress disorder

Before too long Isabelle was using the road, building her confidence and finally the penny dropped: She was a cyclist.

She added: “I felt a physical and mental benefit from cycling that very first weekend. To feel the endorphins kicking in for the very first time in my life was exhilarating. I suddenly realised why people like exercising. Not only did I find a way to get from A to B, but it got my heart pumping and felt fantastic.

“Disabled people don’t realise the life-changing benefits of cycling until they have tried it. They simply don’t know. There’s an ‘it wouldn’t work for me’ attitude. We want to change that – help them discover cycling.

“Cycling has also been quite transformational in people’s attitudes to me as a disabled person. The looks on people’s faces as I cycle past range from surprise, to admiration, to joy and fun. Rather than sympathy, they say ‘wow’ and do a double-take. That would never happen if I was just wheeling on the pavement. I love it.

“It’s also why I love this job with Wheels for Wellbeing. It’s so energising. It’s not about charity and sympathy, we are after cycling equality – giving people what they should be entitled to, a means of transport they control, providing access to physical activity.

“We support the good work Cycling UK does to try to promote and encourage inclusive cycling, and we want to improve conditions to make everyday journeys possible for children and adults on any type of cycle. We want to revolutionise the assumption that cycling means bicycling. I’ve worked in disability all my life and will continue to fight for the rights of the disabled for the rest of it.”

The campaigning door has also been opened for 53-year-old Alan Mendelsohn now he has discovered cycling. Alan travelled to Monday’s Herne Hill event from his home in Stoke Newington using the new KMX Kart recumbent tricycle he bought less than two months ago (pictured below). 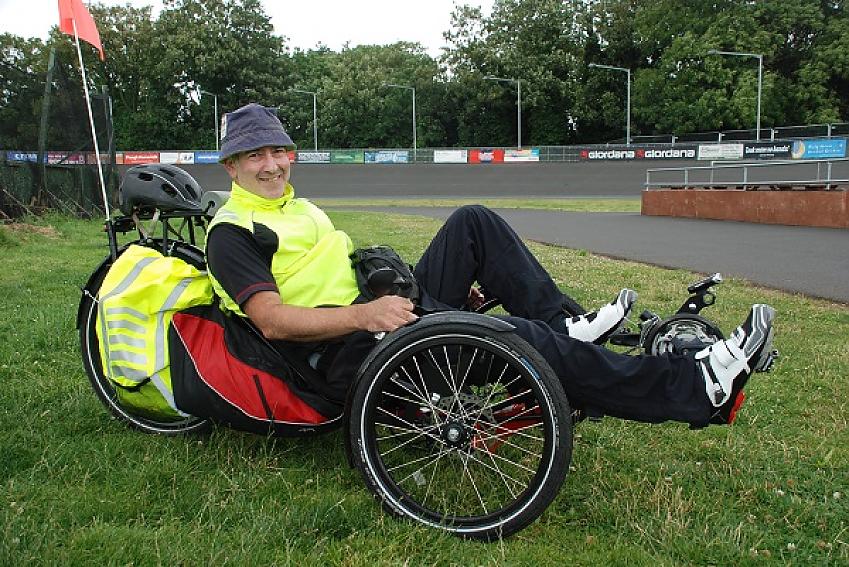 He said: “It really has changed my life. It’s wonderful – like cycling with your own personal deckchair!”

Alan was wounded in Lebanon in 1983 when his tank was struck by a missile and he shattered two discs in his back as he hit the ground. During his recovery he joined the bomb disposal unit as a technical translator from English into Hebrew and vice versa. He then became an Army photographer for the bomb disposal unit. Not only was he shot at – with people thinking his camera was a weapon – but he also saw many friends and colleagues in the unit die.

He had his last back operation in 1996 but suffered further complications 10 years later, and now has to walk using a stick – although covering even a short distance is uncomfortable and painful.

He said: “I used to be a cyclist but even riding a bike with full suspension became agony. The medical experts told me to stay away from it.

“About three months ago I saw a recumbent trike fly past me and I suddenly thought, I have to get one of those. I haven’t looked back since. It’s still all relatively new but it has been a life-changer and has given me independence and freedom again.

“People say ‘cool bike’ when I pedal past – I haven’t heard anything like that for years. You don’t think you are disabled in any way. Now I can get around I plan to do some campaigning for inclusive cycling and Wheels for Wellbeing.

“I’d also like to add my thanks to Isabelle Clement and Neil Andrews from Wheels for Wellbeing for welcoming me in, their help is greatly appreciated.

“Having some form of disability doesn’t mean you cannot cycle. It’s good for your health, makes you feel so much better about yourself and can help you find work.”

With that, Alan was off to cycle home in the rain from the Herne Hill Velodrome – an iconic sports arena which first opened in 1891 and is the only remaining venue still in use from the 1948 London Olympics.

Not that Alan was thinking about the past. Thanks to cycling, he’s now concentrating on a future suddenly filled with a great deal of hope.

To find an inclusive cycling centre near you, take a look at our Inclusive Cycling Network.