Hundreds of cyclists take on the Tri-Vets century ride challenge

Hundreds of cyclists take on the Tri-Vets century ride challenge

The Tri-Vets cycle series, which started on 4 June and concludes this Sunday 10 July, has seen Cycling UK members aged 50+ from all over the country complete a 100-mile or 100-km road ride in under 12 hours. The series takes place every three years and is a sociable and fun activity which dates back to early in the last century.

With events in many parts of Britain, including Stirling, Swansea, Coventry, Teesside, Tyneside, Bristol, Oxford, Chester and North Wales, Alfreton, Surrey, Cumbria, Essex, Oxfordshire, Portsmouth, Reading, Swansea, Leicestershire, Ayrshire, Huddersfield and Kent, there were plenty of opportunities to take on the Tri-Vets challenge.

For many, 2016's was the latest in a long line of Tri-Vets challenges, with at least one entrant proudly exhibiting his commemorative badge and seven date bars - meaning he has completed the event every three years since 1998.

We asked Brian Turnbull, Ride Coordinator for Cycling UK's Teesside Member Group, to tell us about the Tri-Vets event in Teesside:

"On Saturday 4 June 2016, Teesside hosted its third  Tri-Vets event, one which proved to be bigger and better than the two previous ones. In 2010, 29 riders struggled on a strenuous route into upper Wensleydale in continuous rainfall. We learned, and in 2013 we had a much steadier route, we ordered good weather and 44 riders enjoyed the ride. 2016 continued this progress, and numbers had to be limited to 65 when the entry list was closed some six weeks before the event. After several withdrawals before the date, replacements were accepted from a waiting list, but lots of people were still disappointed and in the end, 57 riders tackled the course.  A number of eager riders were waiting at the church at 7.20am, ready for the 9.00am start!

Hartburn Village lies on the South-Western fringe of Teesside, and the Methodist Church provided a base for the event. Within seconds, riders left the urban roads to follow a circular morning route through South West Durham and into North Yorkshire. The riders were a mixed bunch ageing from 50 to 79, with road bikes, tourers and one tandem, and came from as far afield as Norwich, St. Albans, Leeds, Harrogate and Whitby. Half of the entrants were Cycling UK members. 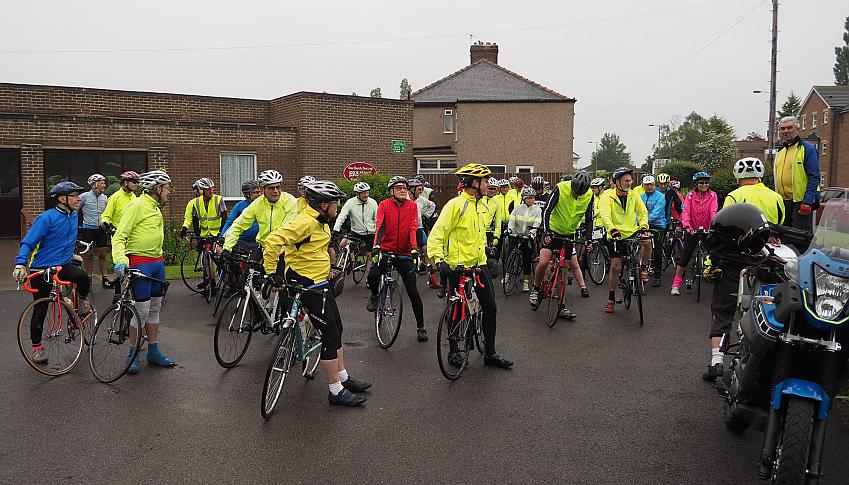 We soon passed the site of a mediaeval village, remains of the Roman occupation and stone age and iron age relics. We saw where the village postmistress was murdered in 2010 and another village where Lewis Carroll once lived. The morning mist and light rain were clearing quickly. Refreshments were provided from the back of a mobile support unit (a VW van) by our Chairman, and riders had mechanical help and First Aid provided by a motor cyclist throughout the ride.  Cakes, apple pies bananas, chocolate bars and drinks were available. Water bottles were replenished. All riders were given a detailed route sheet with emergency telephone numbers, and the route was clearly signed at every junction. There had been a moment of panic when the Mobile Support/Controller realised he had forgotten his mobile phone but this was resolved - he was the main emergency contact, so this mobile was quite important!

The first few riders arrived at the lunch stop after covering 50 miles in 3 hours and the majority were there within 4 hours. Perhaps we made things too easy for them!  The reason for the rush was, of course, the eagerness to enjoy the lunch provided by the good ladies of North Cowton Women’s Institute.  Once again, the meal was excellent, with meats, homemade pies and quiches, salads and homemade desserts, tea, coffee and cold drinks served by charming waitresses.  We certainly did not hurry this part of the event.  Secure cycle parking was even provided at an adjoining farm.

Riders now had a choice: to turn right and return to Teesside to complete the 100-km route, or to turn left and tackle another circle of North Yorkshire to complete the 100-mile challenge. Twenty per cent of riders opted for the 100-km route. The riders were spread out, with some finding things more difficult.  But small groups formed and the friendly banter prevailed. Someone was missing, but after a little anxiety, he was checked by the motor cycle support and all was well.  One lady disappeared but a phone call confirmed she was OK - she had simply followed three cyclists, who were part of a completely different ride, for several miles off route. Later the same lady had mechanical problems but help was on hand. The sky was now blue and the wind light.  All was well.

Richmond, with its famous castle, Catterick  Garrison and Bedale were left behind, then our wheels turned along the Old Great North Road, northwards on the long trip back to Hartburn.  The scenery and nearby attractions were now largely ignored. A further refreshment stop helped but now it was simply a matter of digging in and helping others. All was well, but many were tiring.

There are few hills on the ride but two stiff  short climbs at Croft and Neasham are only a few miles before the finish. It gives riders a greater sense of achievement, although not everyone agreed! Then there was a warm welcome, certificates and even more teas and biscuits at the Church Hall. Incredibly, the first rider completed the 100-mile route in six hours but the biggest applause was for the last two riders some four hours later.  All was very well. The were no incidents and only two minor mechanical issues. These were fixed by our mobile mechanics. A bizarre case of a piece of metal jamming a lower jockey wheel was sorted out by our Club Chairman.

The riders were a mixed bunch ageing from 50 to 79, with road bikes, tourers and one tandem, and came from as far afield as Norwich, St. Albans, Leeds, Harrogate and Whitby."The messages of thanks are now flooding in and make it all worthwhile. "

Many of the members of Teesside Cycling UK family and volunteers gave up hours of their time and skills to make this event a success but I can assure them that their efforts were appreciated by all the participants. The messages of thanks are now flooding in and make it all worthwhile. Photos and commentaries were published on our local website and Teesside Facebook page. The £15 entry fees covered our costs after some judicious negotiating the costs of room hire and catering, but mainly through the efforts of volunteer helpers.We are now a hard act to follow and cannot wait for 2019!"

On 26 June, Ayrshire CTC held a Tri-Vets event. It was part of their first weekend Cycling Festival. Despite the gloomy weather forecast, 23 riders took part. Eight cyclists achieved the 100 miles, five of which had ridden the Stirling Tri-Vets event on 5 June. The 100 mile route consisted of 3 loops: Troon to Stewarton 32 miles, Troon to Mauchline and the Ayrshire Glens 38 miles, Troon to Stair 30 miles. The weather wasn't that kind with about 30 miles in the dry and 70 miles in the rain.

The 100km ride had 15 cyclists who were a mix of Cycling UK, local cycling clubs & individual riders, including a couple of Ayrshire CTC members who had never ridden with the group. The route took in two loops, but missed out Troon to Mauchline. It was 20 miles dry and 40 miles in the rain.

For one Ayrshire rider, it was his first ride over 50 miles. He entered expecting to achieve the 100km and hoping to go for the 100 miles. He achieved 100 miles with energy to spare.

I raised £400 for Alzheimer Scotland for completing the Stirling & Ayrshire 100 miles. A tribute to my mum who is a member of Cycling UK and rode the Tri-Vets, her first was Stirling. Now she has Alzheimer’s but until this year I was still able to take her out on her bike.

Pat Standen from Ayrshire raised £400 for Alzheimer Scotland for completing the Stirling & Ayrshire 100 miles. She said it was "A tribute to my mum who is a member of Cycling UK and rode the Tri-Vets, her first was Stirling. Now she has Alzheimer’s but until this year I was still able to take her out on her bike."

The event was a a success, Pat added "We’ve received several messages saying how much people enjoyed the ride – despite the rain.They must be cycling addicts."

Once again we have had a highly successful elite event leaving everyone [except perhaps the organiser and the caterer!] wanting more. The Tri-Vets is a unique event; the achievement of a challenging distance in the company of like-minded enthusiasts, with a strong emphasis on doing it as a group.

A few more members this time around meant four riding groups. Nearly half of our riders had ridden a Tri-Vets before, a few having a collection of five or six date bars, and for one this was his tenth date bar. This year I struggled to find leaders and I am very grateful to Johnny Banks, Bob Macdowall, Colin Stanley and Paul Welch whose great experience and good leadership made everything run very smoothly and efficiently, and the camaraderie of the groups made back markers unnecessary, just like a ‘proper’ club run.

This was the fourth Kent Tri-Vets I have organised, and since I have been doing them I have run them with a single base HQ and four loops. This has been further refined to create an easy route with the minimum of hills, none of which involve ‘out of the saddle’ effort, whilst retaining the maximum of interesting country, quiet lanes and back roads. We currently use the same route for our 100-mile audax style event, giving more riders the opportunity to reach that all important milestone, with the advantage of not being far from ‘home’ if it all gets to be too much on the day.

The Tri-Vets is a unique event; the achievement of a challenging distance in the company of like-minded enthusiasts, with a strong emphasis on doing it as a group.

Three of the groups completed the ride in around 10 hours including the stops; the fourth group were delayed by mechanical problems [a repaired blowout and later tyre replacement] but finished in well under 11 hours. [Time limit for the event is 12 hours]

Special thanks go to my better half Ros who not only baked all the cakes but made up all the lunches to order, poured all the tea + coffee throughout the day, washed up, and cleaned the kitchen and toilets afterwards.