The ‘Biking Bishop’ appropriately gave the address at the 90th annual Cyclists’ Service of Remembrance in the North Yorkshire village of Coxwold on Sunday 8th May 2016.

The Right Reverend John Thomson, Bishop of Selby, was among the many dozens of Cycling UK members who rode to the picturesque North Yorkshire village to attend the service.

St Michael’s Church was filled with a sea of multi-coloured jerseys, with cyclists acting as bell ringers, sidesmen, offertory collectors, lesson readers, choristers and the organist.

The 45-minute service was led by the Rector, the Reverend Liz Hassall, and opened with the ‘cyclists’ hymn’ – To Be A Pilgrim.

Guest preacher at the small 14th Century church was Dr Thomson, a keen cyclist who wears a purple tabard that says ‘Biking Bishop of Selby’.

Over 200 cyclists’ memorial services were established across the country by cycling groups in the years after the First World War, to honour fallen colleagues and give thanks for the safe return of others.

Today, only two of these services remain – at Coxwold and at Meriden in the West Midlands, where the National Cyclists’ Memorial was erected in 1921. The Meriden service will be held on the village green at 11am a week on Sunday (22 May).

The Coxwold service began in 1927 after two cyclists from Teesside were in the village and met the Rev Gibson Black, vicar at the time. A bicycle-wheel floral tribute was placed on his grave on Sunday.

Coxwold service organiser Judy Webb, of CTC North Yorkshire, said the Tour de Yorkshire and the 2014 hosting of the Tour de France had reignited interest in cycling in the county and beyond.

She added: “In the days when the service started there was a real interest in getting out and about on bicycles as well. Cycling became huge after the First World War, in the 1920s and 1930s.

“A lot of people worked in factories during the week, but owning a bike allowed them to get out into the countryside at weekends and realise how pedal power could help them discover new places and get them away from the more mundane.”

Organised rides to the Coxwold service were arranged by local Cycling UK members from Hull, York, Leeds, Malton and Teesside – and much-welcomed sustenance was available from the local WI in the village hall. 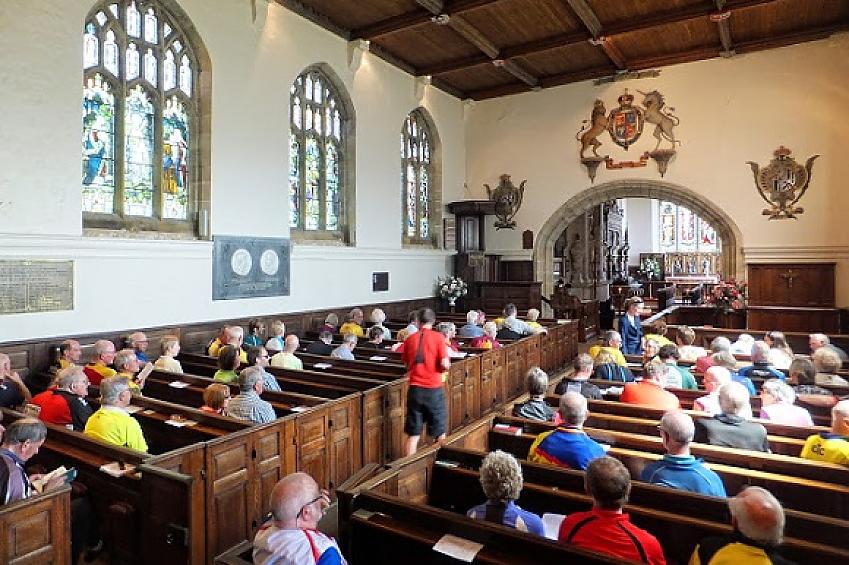