Lucy and her 75-year-old dad hail their C2C success

Lucy and her 75-year-old dad hail their C2C success

Lucy Armour, who is partially sighted due to albinism, and her 75-year-old dad David Greenwood braved the late-April freeze to successfully complete their Coast to Coast cycling adventure.

The duo’s friends and family would be justified to hail them as heroes – although hail is probably the last word they want to hear right now!

Lucy and David, both members of Cycling UK and Calderdale CTC, had to shelter from hailstones during the course of their 150-mile, three-day journey from Whitehaven on the west coast to Sunderland in the east.

Snow, slush and a biting wind made conditions tough, but Lucy felt understandably elated after completing a bike ride she couldn’t have dreamed of before joining the Cycling UK member group Calderdale CTC in August 2014.

Lucy, 46, said: “We had some pretty dire weather, it never got particularly warm. There was quite a bit of snow around and we cycled through hail, sleet and slush. We even had to stop at a couple of petrol stations and go inside to warm up for a while.

“I’m glad I packed some warmer clothing, although I could have done with a pair of thick waterproof gloves.

“But I’m pleased with how it went and dad did really well. I told him he was amazing – he’s nearly 76 years old. He had an electric bike but only used the lowest power setting most of the time as he didn’t want to run out of battery out in the sticks somewhere!”

One of the high points of the ride, literally, was stopping for lunch at the Hartside Café, Alston, Cumbria – the highest café in England at 1,904 feet above sea level.

Lucy, who rode a Liv Invite gravel bike, said: “The climb was hard but spectacular and the views at the top were amazing. We had left the hail behind and it was mostly sunny for the climb, then from the summit you could see banks of hail across the hills, swirling like a tornado. That will live long in the memory.”

I sing the praises of Cycling UK and Calderdale CTC. A couple of years ago I was pretty unfit, but joining the club has changed my life. I have lost 2½ stone in weight and I’m so much fitter and happier about myself.”

Lucy and David dipped their bike wheels in the sea before setting off from Whitehaven and again on their arrival in Sunderland – a traditional C2C act which did not require them to break any ice, although it felt cold enough!

Speaking on her return home to Sowerby Bridge, near Halifax, Lucy added: “My legs feel fairly good at the end of it but I’m really tired. My problem was lack of sleep as I don’t tend to sleep well in a strange bed.”

Not that she intended putting her feet up for long. If the weather wasn’t too awful, Lucy planned to go out on the Thursday night club ride yesterday (28 April) – although she hoped her Calderdale colleagues would forgive the fact she would be using her electric bike!

Lucy is registered ‘severely sight-impaired’. She explained: “It’s a lack of detail – small things, or things further away. Maybe it’s the equivalent of looking at a very low resolution image for a person with good eyesight.

“Being partially sighted always limited the road cycling I could do, so I tended to stick to canal paths and tracks on my mountain bike.

“But in August 2014 I joined Cycling UK and – thanks to my local branch, Calderdale CTC – I have become an avid club rider, even winning our trophy this year for the most events/rides attended.

“When I’m cycling it really helps to be with a group, who can point out things like potholes and help when it comes to going faster downhill. I’ve loved the group from day one – the camaraderie and the feeling of confidence riding with them brings.

“I sing the praises of Cycling UK and Calderdale CTC. A couple of years ago I was pretty unfit, but joining the club has changed my life. I have lost 2½ stone in weight and I’m so much fitter and happier about myself.”

Lucy has a 20-year-old son, Joel, who has autism. She was a support worker for adults with learning difficulties until January, when she joined the Calderdale Parents and Carers charity as a Family Voice Supporter.

Lucy and her dad, who lives in Huddersfield, used their C2C ride to raise funds for Calderdale Parents and Carers.

She explained: “Because of my disability and my son’s I know how important parents and carers groups are. Calderdale Parents and Carers are a real lifeline to families with disabled children and young people in our area.”

Below: David Greenwood pictured outside the Hartside - the highest café in England at 1,904 feet 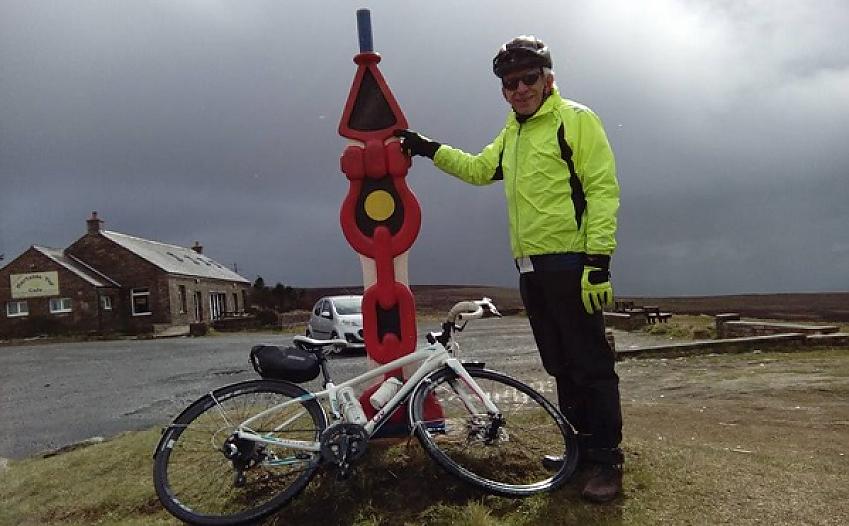 Mending the damage of Beeching's axe: cycling threat or opportunity? View
Cycling UK continues to support the UK to cycle
This remains true during this difficult period with the ongoing threat of coronavirus Covid-19
Read our latest advice on cycling
Join Cycling UK to help us change lives and communities through cycling
Membership gives you peace of mind insurance, discounts in cycle shops, rides & routes
Join now