Olly Coulson suffered brain damage when he was hit by a car at the age of eight – but this friendly, determined cyclist has become a dab hand at bike maintenance.

Olly is one of three young, long-term unemployed people from Petersfield, Hampshire, who have been taught new skills thanks to Cycling UK.

They have recently completed a ten-week bike maintenance course at the Bicycle Recycling shop in Gosport, organised by Andrew Chapman, Cycling UK’s Development Officer for Hampshire.

Olly, Anotida Jaji (known as AJ) and Tyler Marks are in the ‘hard to reach’ bracket, and live in social accommodation in Petersfield provided by Radian Housing – an organisation which also helps them get training and find jobs.

Now 31, Olly was struck by a car “which came out of nowhere” 23 years ago while riding his bike in Holland, where the family had moved for his dad’s work. The impact caused brain damage that affects his right side.

He returned to England at the age of 14 and in 2008 moved to Petersfield from Four Marks, where his parents still live.

Olly said: “Now I have my own house and a lot of independence. I have a personal assistant called Becky who comes round every day to do my cooking and cleaning.”

Interrupting his hard work adjusting a saddle, he added: “I enjoy learning about new things and I’m really enjoying the Cycling UK sessions. I knew what a bike frame was, and a chain and saddle, but everything else has a different name and it is nice to learn what the different parts are called and find out how to fix things.

I enjoy learning about new things and I’m really enjoying the Cycling UK bike maintenance sessions. What I like most about this is that I’m getting out of the house and mixing with people.”

“What I like most about this is that I’m getting out of the house and mixing with people. I’m interacting, which is a really nice thing that Radian help you do.” As the wind howled and rain poured outside the Bicycle Recycling shop, close to the mouth of Portsmouth Harbour, Olly said: “If I wasn’t here today I would just be at home watching TV, especially as the weather is foul out there.”

The last bike maintenance session was held just before Easter, with Olly, AJ and Tyler receiving certificates of attendance detailing the fact they have received training in basic cycle maintenance, including roadside repairs.

Furthermore, 16-year-old Tyler has progressed on to the Bike Maintenance Academy that Bicycle Recycling is running in conjunction with Highbury College, a few miles up the road, where he will work towards a Level 2 qualification in cycle maintenance and repair.

Each of the trio who attended the Gosport sessions also got to take away the cycle he was working on. Olly has given his bike to his assistant Becky, which he said will mean they can go out cycling together as he has a tricycle.

Olly (below right) added: “Unfortunately I cannot ride the bike I’ve been working on, but I have been cycling at Alice Holt, near Farnham, where they have bikes and tricycles for all abilities. I was out with my mum about ten years ago at Alice Holt and came across Cycling UK and the bikes and tricycles they have. I have known about Cycling UK for a long time and they are amazing.”

AJ was also busy in the Gosport Bicycle Recycling workshop, which occupies a large unit at the Bus Station in South Street. The 23-year-old is a big sports fan, listing basketball, football, rugby and 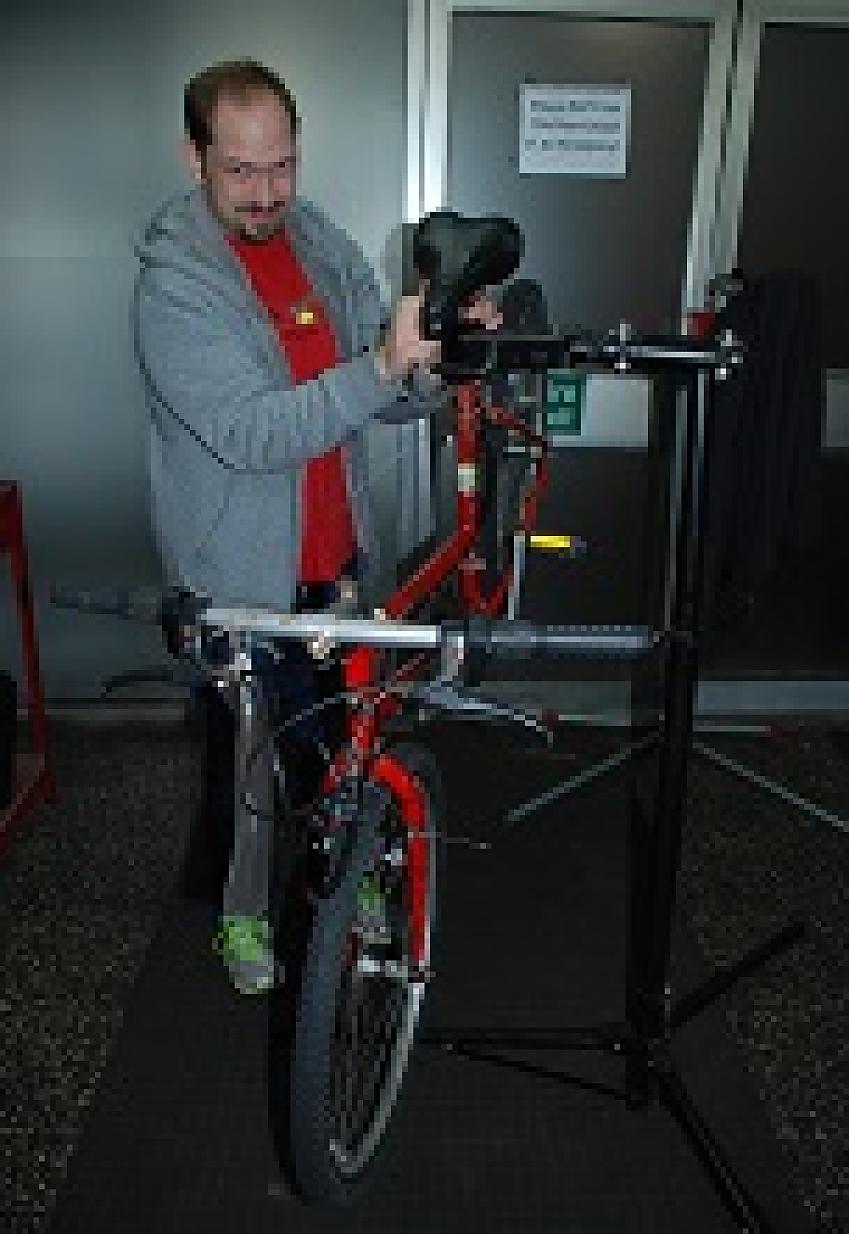 tennis among his passions – not to mention tinkering with bikes.

AJ said: “I used to own a BMX and fixed it myself. I’m learning how to fix everything on a bike now and I love it – I’m getting really engaged with it. The time goes by so quickly. I would like to become a bike mechanic.”

Cycling UK’s Andrew Chapman said: “The whole bike maintenance programme has been a great success. The growth I have seen with AJ, Olly and Tyler is fantastic, in terms of both the skills they are learning and their self-confidence. They really seem to enjoy coming here – they get their coats off the moment they arrive and are ready for work.”

The Bicycle Recycling centre in Gosport opened in 2012 and is a social enterprise which comes under the umbrella of Motiv8, which exists to improve the life chances of young people – particularly disadvantaged and vulnerable youth.

Jannine said: “Olly and AJ started at different levels but both have undoubtedly made progress. Hopefully they will feel confident when they leave here to do basic safety checks on a bike.

“We provide training and work opportunities for young people through apprenticeships, traineeships and the Bike Maintenance Academy, which has just started – as well as Bike Maintenance Clubs supported by Cycling UK, Radian and Petersfield School.

“All of the bikes we have here are donated – many privately, and we also have partnerships with the police and South West Trains.”

If possible, a donated bike is upgraded, made fit for purpose and put on sale at an affordable price at Bicycle Recycling, which also has a shop in Winston Churchill Avenue, Portsmouth. If it isn’t cost-effective to do up the bike for use, it is given to a charity which provides cycles for Africa. Any bike beyond repair is stripped down and whatever can be salvaged is re-used.

Amanda Henderson, Team Assistant for the Employment Support and Training team (EST) at Radian Housing, said: “It is brilliant working with Cycling UK and bike maintenance is a fantastic training opportunity for us and the likes of Olly, AJ and Tyler.

The bike maintenance programme has been a great success. The growth I have seen with AJ, Olly and Tyler is fantastic, in terms of the skills they are learning and their self-confidence.”

“Tinkering with bikes and anything mechanical appeals to many of the young men we are trying to help. It gives them a sense of personal achievement – and at the end of the programme they can take their work away.

“The commute here to Gosport from their homes in Petersfield is part of their life skills training – along with getting up and making sure they are in a certain place at a certain time, then being in a working environment.

“Radian’s EST project has been running for over three years. To date, we have got 448 people into employment and 1,468 into training or support.”

Nick Helme is a volunteer for the project and supported the young people on their journey to Gosport, as well as assisting them in the workshop. Nick is an engineer who spent 31 years designing and building swimming pools before becoming a social worker 12 years ago.

He said: “It’s good to see them getting involved and participating in something that they enjoy and will be worthwhile, because they will be able not only to own a bike, but also maintain it and keep it safe for use on the road – whether they use it for leisure or, hopefully, work as well.”

The last word should go to Olly. He said: “I’m a keen member of Petersfield Round Table and every year we hold the PUAD (Petersfield Ups And Downs) charity bike ride.

“I help set the course up, putting up signs and things, and last year I did the small ride on an adult-size tricycle. There weren’t too many hills, but it was hard work. But I did enjoy it – and now I’ll be able to do some basic maintenance on the tricycle as well if I have to.”

Great to read of another

Great to read of another successful scheme.
We have a similar one running in Chester called Bren Project(Bikes), which undertakes similar work of training & repairing/selling cycles at very reasonable rates.