Mum’s the word as Eve and Glynis lead Suffragette Ride

Mum’s the word as Eve and Glynis lead Suffragette Ride

Eve Holt and Glynis Francis will be celebrating Mother’s Day, International Women’s Day and the suffragette movement all rolled into one on a bike ride with a difference today.

Eve, CTC’s Cycling Development Officer for Manchester, and her mum Glynis, a former world champion cyclist and CTC National Volunteer of the Year, will be leading the Suffragette Ride in memory of the movement which helped secure Votes for Women.

They will be suitably attired in Edwardian ‘Rational Dress’ for the ride from Chorlton to Alexandra Park in Manchester, via the Pankhurst Centre.

Thirty women have signed up for the event, with more likely to take part on the day, as they mark the bicycle’s important role in women’s history, celebrate the suffrage movement and highlight the gender imbalance that still exists in cycling today.

The Suffragette Ride comes three days before International Women’s Day on Tuesday 8 March and – particularly relevant from the point of view of Eve and Glynis – is just 24 hours before Mother’s Day.

To say it isn’t the first time Eve and Glynis have pedalled in tandem would be the understatement of the year – they have shared an amazing cycling story ever since Eve was a baby.

Glynis recalled: “We didn’t have a car so when I went back to work after Eve was born, I cycled with her strapped to my back in a papoose and she went to the work crèche. Before long she was using a baby seat on my bike, then I bought a tandem with kiddy cranks on the back for Eve.

The bicycle has long been associated with Manchester’s suffragettes and is a powerful symbol of women’s liberation. When you put a group of women together, things get done.”

“In 1985, when Eve was six, we toured Ireland on the tandem (pictured below). These were pre-Lycra days so it was ski socks, trainers, and thick clothing. When you add in the fact we had panniers front and back, it could make pedalling hard work – and I had to have a quiet word when I saw our shadow on the kerbside and realised Eve had her feet up!

“But she was a little powerhouse when it came to cycling, which is hardly surprising as she did so much of it as a child – and has done ever since.”

Eve said: “I grew up on the back of mum’s bike as a baby and was the only child who commuted to school on a tandem. I remember a school fair where mum offered tandem rides around the playground with her at 50p a time to raise funds. I thought it was the uncoolest thing going – but the next thing I knew there was a big queue of kids wanting a go!”

Glynis won sprint gold in the World Masters Track Cycling Championships at Manchester Velodrome in 2002 – a feat she repeated at the same home-town venue in 2013, when her speed of 43.5kmh (27mph) earned her the accolade of the ‘Fastest Grandma in the World’!

But she believes her biggest cycling achievement is setting up her ground-breaking cycling network for women, Team Glow, which celebrated its fifth birthday last month. 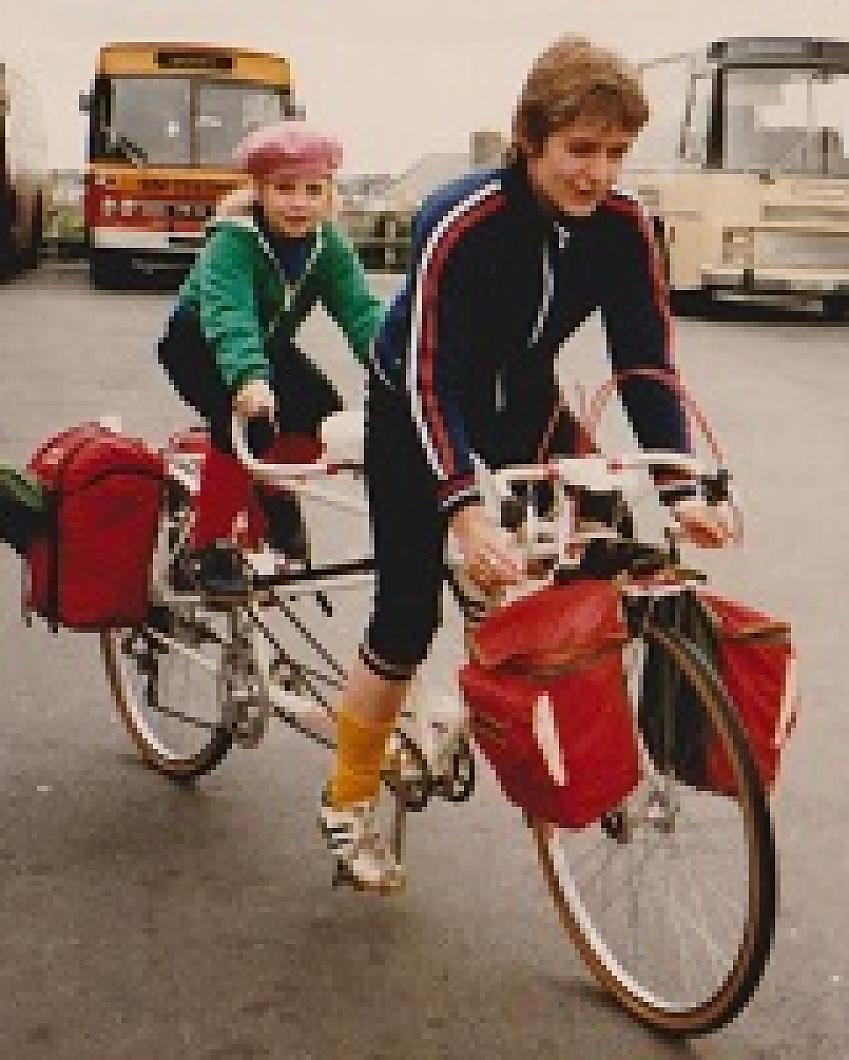 Team Glow, a CTC-affiliated group, has attracted a steady stream of women – some of whom had not picked up a bike for decades – and turned them into accomplished cyclists. It has more than 700 women as Facebook friends, 120 fully paid-up members and another 80 who currently ride as guests with Team Glow’s MeetUp group, who will hopefully become members.

Glynis, an unsurprisingly fit and youthful 61, said: “We have at least one graded ride a week, and typically two or three, catering for beginners to faster riders. We have trained up more than 40 women as Ride Leaders, and a couple of us from Team Glow have just set up Manchester Bike Tours.”

Her exceptional work to get women cycling saw Glynis scoop the Arthur Moss Medallion as CTC’s National Volunteer of the Year in 2013, when she was also named regional winner for the North West.

Her daughter Eve has also delivered exceptional work to promote cycling in the local community – frequently benefitting the disadvantaged in society – both before and since becoming CTC’s Cycling Development Officer for Manchester last September.

Eve and her husband Wayne have three children, 10-year-old Eden, Jacob, 8, and Ged, 6 – who wants to be the next Geraint Thomas. Cycling is clearly in their genes!

Eve is a trained solicitor, having qualified in law at Queen’s College, Oxford. Glynis said: “She is bringing those advocacy skills to her role with CTC and her work in the community. She has transferable skills and I find it hugely rewarding to see her wanting to work in such an empowering way, and promoting cycling. I’m very proud.”

Today’s event will probably see the cyclists split into two groups, with Glynis and Eve each as Ride Leaders. They will be wearing suffragette costume, although Glynis wasn’t so sure about the bloomers which had just been delivered to her house as she talked about her own cycling history!

They will give cycling safety tips during the ride, which will use the Fallowfield Loop cycle route. There will be a stop at the Pankhurst Centre at 62 Nelson Street, Manchester – the home of Emmeline Pankhurst and the building where the first meeting of the Women’s Social and Political Union was held on 10 October 1903.

The riders will also visit the Gallery of Costume in Platt Fields Park and talk about Rational Dress – a movement which started in Victorian times and advocated more practical and comfortable clothing for women. Female cyclists were at the forefront of the movement, with supporters wearing knickerbockers and jackets rather than the voluminous dresses which made it virtually impossible to cycle.

Alexandra Park is an appropriate final destination for the ride, as Glynis explained: “Women used to hold rallies at the park during the suffragette days. If the trees could talk, what a story they could tell us about women’s fight for freedom.

“The bicycle has long been associated with Manchester’s suffragettes and is a powerful symbol of women’s liberation. When you put a group of women together, things get done.”

The Suffragette Ride, which starts at 11am in Chorlton and finishes with tea and cake at Alexandra Park from 1pm, is organised by Sustrans in association with Manchester Bike Tours, Transport for Greater Manchester and CTC.

Eve and Glynis are organising other events in March to celebrate the growth of women’s cycling in Manchester over the last year.

Riding the Surrey Hills on the trail of the suffragettes View