Four members of the All Party Parliamentary Cycling Group met David Cameron on Wednesday (15th July) to discuss cycling, and cycle-lorry safety in particular. The Prime Minister agreed to the meeting in response to a request at Prime Ministers' Questions from Ben Bradshaw MP, made on 24 June following several recent cyclists' deaths under the wheels of lorries on London's roads.

Both CTC and the London Cycling Campaign provided briefings to the group which primarily looked at lorry safety and the importance of cab redesign to provider greater all-round vision for the cab driver and eliminate blind spots.

Lorry manufacturer Mercedes has been making great inroads recently in redeveloping lorry cabs (see below), and CTC believes the use of such lorries should be a contractual requirement for those working on Government contracts such as High Speed 2. CTC is also pressing for strengthening the enforcement of unscrupulous haulage operators. 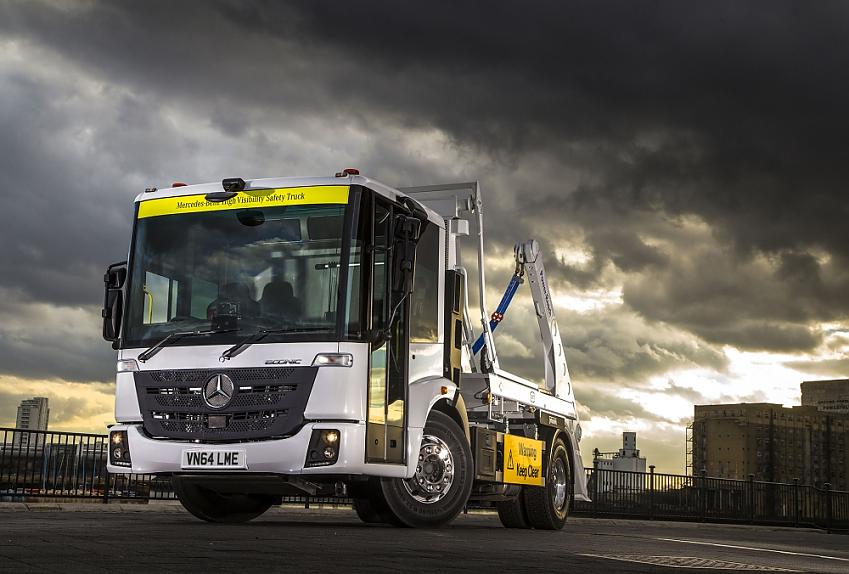 According to the APPCG, the Prime Minister expressed his concern and paved the way for them to have a more in-depth meeting with Patrick McLoughlin. Issues to be discussed will include consideration of evidence from other world cities which have some form of lorry ban, staggered traffic-light phasing at junctions, design improvements for construction vehicles, improved enforcement of lorry safety regulations and improvements to roads and junctions to make them safer for cyclists and pedestrians.

Ben Bradshaw MP said, "I was delighted the PM agreed to meet us so soon after I raised the issue in Parliament. Following our meeting today, we will be meeting with the Transport Secretary to discuss the issues in more detail."

Our major cities have a lamentable record both for levels of cycling and for cycle safety compared to those of our European neighbours, and it would take very little public investment to make a big improvement in the climate for cycling."

Ruth Cadbury MP said: "The Prime Minister shared our concerns ovr the number of cyclists that have been killed and seriously injured by HGVs mainly from the construction industry and I feel that he will now encourage ministers to seriously explore measures to reduce these incidents."

Alex Chalk MP said: "This was a very constructive meeting. The Prime Minister’s personal interest in cycling, and the safety of cyclists, was obvious and very welcome. I look forward to taking our safety agenda forward with the Transport Secretary."

Dr Sarah Wollaston MP, who also chairs the Health Select Committee said "6 out of 7 of the deaths in London have been women killed by construction lorries at junctions. It's so important that women are not deterred from cycling on safety grounds and there is far more that can be done to reduce the risks. We hope that the Government will implement and fully fund the Cycling and Walking Investment Strategy which the All Party Cycling Group successfully lobbied for inclusion in the Infrastructure Bill in the last Parliament."

CTC believes that while it is encouraging to see the Prime Minister engage on cycling at a turbulent time, a meeting is only as useful as its outcome.

Cycling in the UK needs to see the Government roll out the Cycling and Walking Investment Strategy (CWIS) as soon as possible, and ensure that it contains adequate levels of funding of at least £10 per head annually, rising to £20 as cycle use increases. This needs to be backed by national design standards for cycling infrastructure, to create the conditions where cycling becomes a safe and normal activity for people of all ages, backgrounds and abilities.

Privately, CTC ministers and officials are keen to ensure that the CWIS has the same status as the Government's road and rail investment strategies. While this aspiration is welcome in principle, there is concern from CTC and other;cycle campaign groups that the time taken to develop such as strategy could delay the need for more urgent decisions on funding in the short-term.

Any delay in launching a CWIS, while the Government plans a fully comprehensive cycling and walking plan, could well be disastrous for many local authorities. With most having no earmarked funding for cycling beyond April 2016 - when the coalition Government's Local Sustainable Transport Fund (LSTF) runs out - some councils are once again starting to lose the staff and skills they had built up in recent years.

CTC is currently urging Government to maintain continuity of funding for local authorities’ cycling projects in the event of further delays to the CWIS so as to bring an end to a stop-start culture of cycle funding.