How Cycling UK's kit is made

How Cycling UK's kit is made

One of the common threads in the 41-year story of Godfrey Sports is the experience of its employees. “How long have you worked here?” I ask sewing machine operator Cath.

“Some of the newer members of staff have only been here about ten years,” jokes managing director Tom Godfrey.

Tom has been the MD for 16 years. He took over from his mother Judith, who founded the business in 1978. Godfrey Sports is an independent sports-kit manufacturer making performance wear for cyclists, rowers, triathletes, and netball players. And it’s now the manufacturer of the new Cycling UK kit. 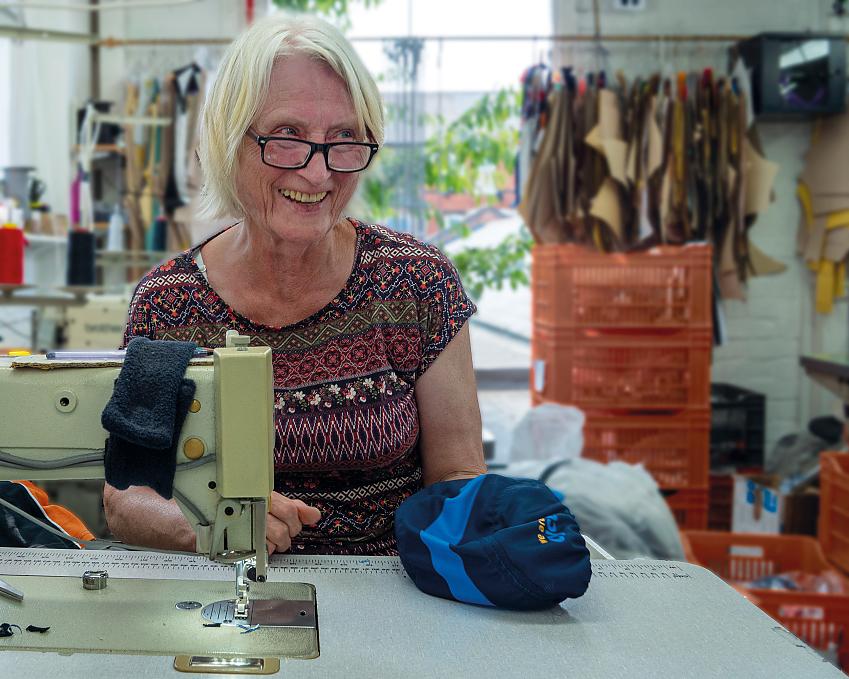 The Godfrey Sports factory is nestled into a housing estate on the outskirts of Nottingham. On the wall of the building, overlooking the children’s play area, is a brightly coloured mural with flowers, trees, and local scenes. Judith Godfrey encouraged the painting of the mural to brighten up the park. Now retired, she still helps maintain the park gardens. “We’re part of the local community,” Tom tells me.

The inside of the factory feels crammed. On the top floor are rolls and rolls of fabrics, patterns hung in every available space, and a selection of completed jerseys, gilets, and other sports apparel. On the bottom floor are a huge sublimation print machine and an intimidating-looking fabric press. Embroidery machines, a vinyl printing area, and a large cutting table take up the rest of the space. On the middle level, the noisy hum of sewing machines nearly drowns out the chatter of voices in the sewing room, which contains yet more neatly hung patterns.

Tom runs the company alongside his sister, Kristen Godfrey-Dunn, who joined in 2012. “When I started here it wasn’t like starting a new job,” she says. “We both grew up here.”

When I started here it wasn’t like starting a new job, we both grew up here.

Godfrey Sports made rowing kit before diversifying into cycling. A poster of Sir Steve Redgrave and Matthew Pinsent, clad in their 1996 Olympic gold-winning outfits, hangs in Tom’s office. “Steve still sends my mum and dad a Christmas card,” Tom says.

The company began making cycling kit in 2010, with help from Olympic cyclist Bryan Steel. “Bryan made sure everything was tighter and more aerodynamic,” says Tom. “It took a few years to perfect but we’re really happy with it.” 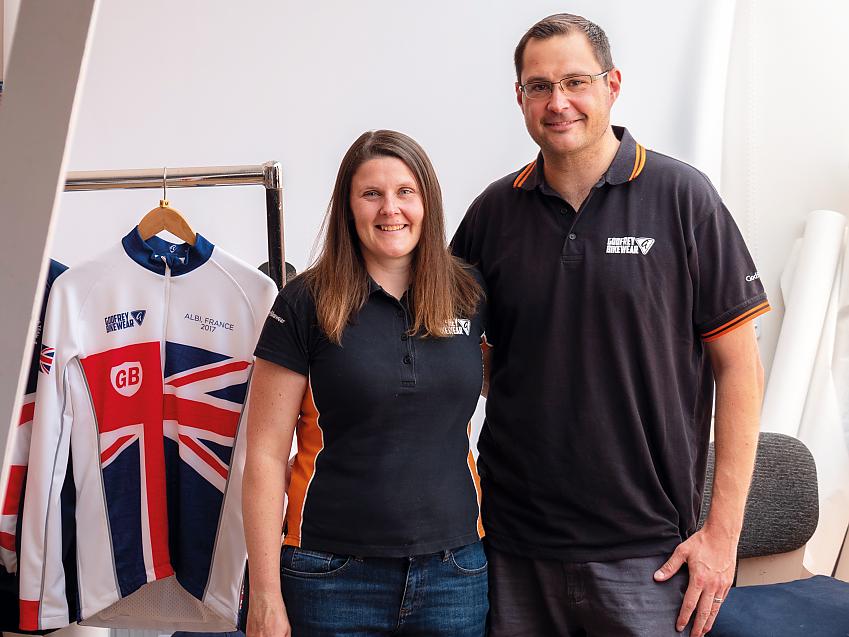 Most of the Godfrey Sports staff are local – as is the majority of the fabric. The bulk of this comes from a manufacturer a couple of miles around the Nottingham ring-road, some from nearby Leicester, and some from as far away as Cheshire.

“We try to buy local wherever we can,” Tom says. “But we do have to get some of the cycling fabric from Italy. It’s simply the best fabric we’ve found.”

Tom takes me around the factory to meet the 27-person team and to follow the many processes that go into creating just one piece of kit. I watch their most popular item being made: the Elite Cycling Jersey.

When an order comes in, the pattern is printed onto paper using special fabric ink. Together with white material, this is put into the press. Under a pressure of 9bar and heated to around 200ºC, the ink turns into a gas, which is immediately absorbed by the fabric. After that, the individual
parts of the jersey are cut out by hand and sent up to the sewing machine operators.

A cycling jersey needs to be put together in a particular order. This means that it gets passed between as many as seven different people. Yet Tom was hesitant to call his products handmade.

“All the processes are operated by people,” he says. “There’s a human control over every element, rather than hitting a button and seeing what you get at the end. The team are using machines, but it’s their sewing knowledge and precision work that’s producing the garments. It’s a labour-intensive process. The team take a lot of care and pride in what they do.”

That includes not just their stock kit and Cycling UK clothing, but also bespoke cycling apparel. If you want a special one-off, in your colours, your logo, with your name on it, and ready for your event in two weeks’ time, Godfrey Sports can do it.

One of the Godfrey Sports team is Mandy Brown, a sewing machinist at the factory for the past 31 years. Her mother Joan, now retired, was there before her, starting on the company’s very first day. Mandy’s brother, sister, daughter, and nephew are all previous employees, while her eldest daughter Laura has been working as a vinyl printer for around 15 years.

“Most of my family have at one time or another worked here,” Mandy says. “They should change the name to Browns! My mum still remembers Tom running around the sewing room as a child. When he was nine he fell from the mezzanine floor above and landed between two sewing machines!”

Our mum was a seamstress. The idea of taking away jobs from people like her just doesn’t seem right.

The importance of family and community is clear talking to the staff.  Sisters working alongside each other, along with mothers, daughters, and cousins. “The reason we continue to manufacture in the UK while a lot of our rivals outsource to either the Far East or Eastern Europe is that our mum was a seamstress,” Tom says. “The idea of taking away jobs from people like her just doesn’t seem right.”

That sense of community comes across in their clothing too. The popular Mokey Jersey is so named because graphic designer Phil is from the North East. In Middlesbrough, ‘mokey’ means ‘a grey wet day’, Tom explains. 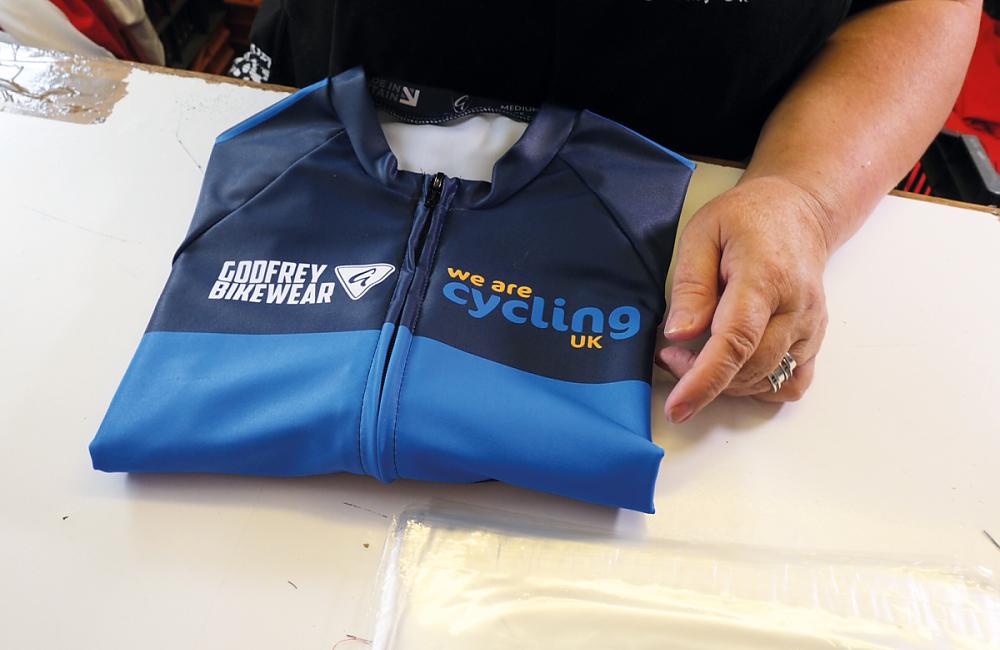 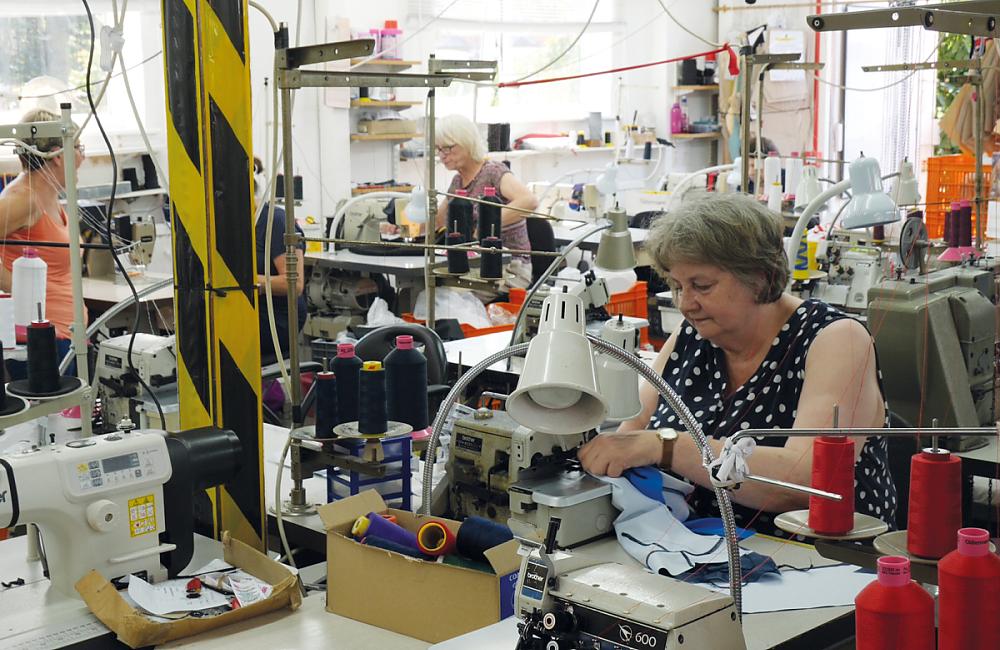 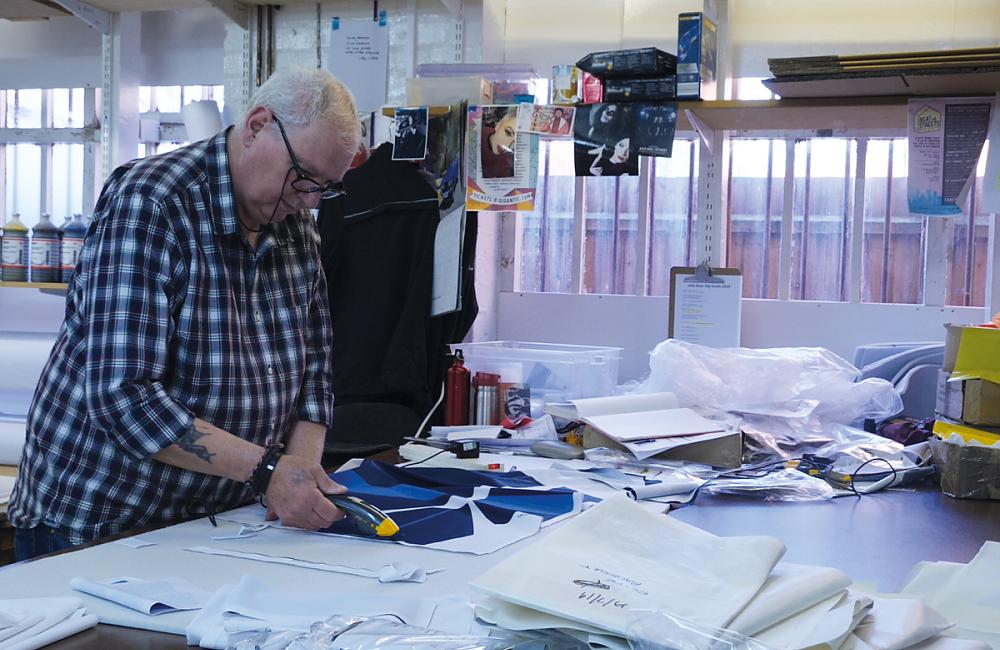 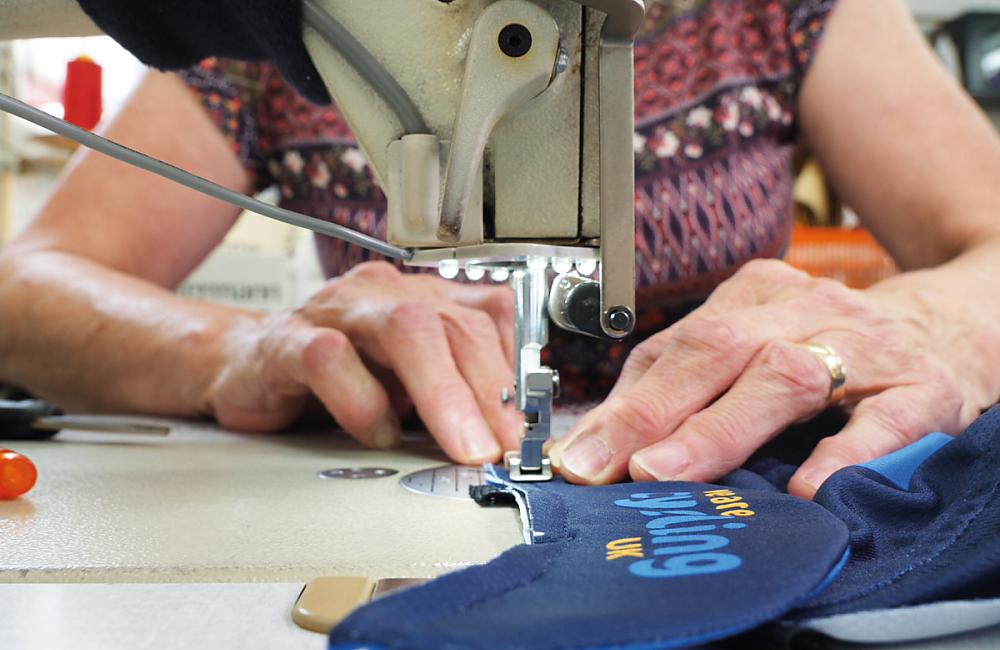 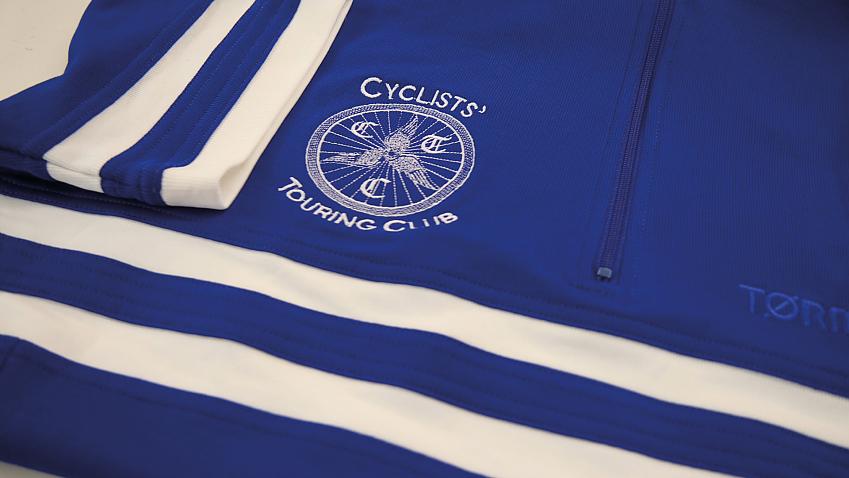 The range comprises short and long sleeve jerseys, a wool cap, and a musette bag. The musette is made from waterproof 1000D Cordura and lined with Oxford nylon. The cap and jerseys are made from Merino SportWool.

“SportWool is an amazing fabric, without doubt the most functional of all sports based fabrics,” says Paul Higginson, who runs Torm with Alan Parkinson. Both are ex-corporate scientists who also run a bike shop, SP Cycles, in East Kent. “SportWool was developed to combine the performance
attributes of synthetics with the comfort and  breathability of a natural fibre,” Paul adds.

Retro cyclewear designs are perennially popular. “We like to call them classic designs rather than retro,” Paul says when I ask him why. “Branded cyclewear tends to be expensive relative to what you are actually getting, so people gravitate to a great quality, classic design that performs well.” 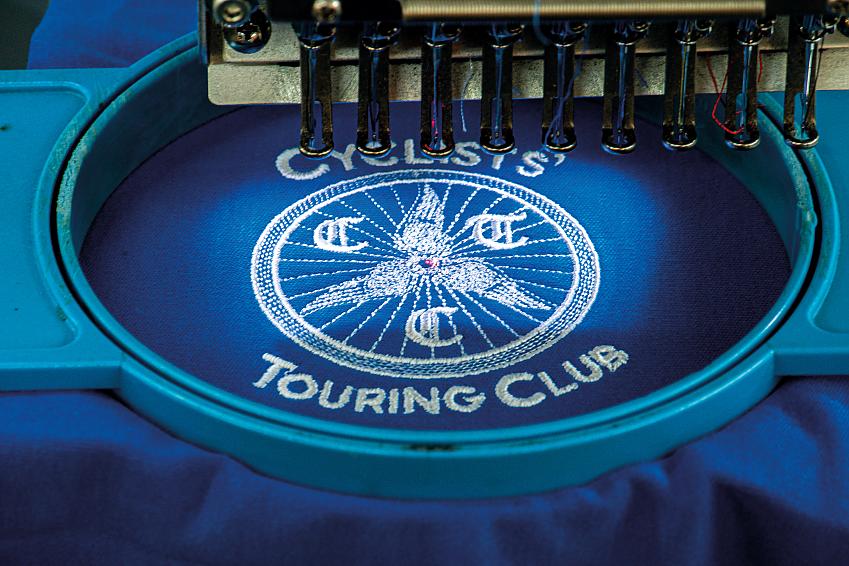 Design and create kit for your cycling club or group View

What cycle clothing to wear when it's cold View