Guide to filming your bike rides

Guide to filming your bike rides

If you've ever spent a little time looking at people's bike trips on YouTube, you might have wondered how to do it. Keen bikepacker and film maker Barry Godin shares his advice on how to film your cycling adventures.

Why it’s a good thing to record your adventures

Before you start, you need to think about why you want to film your adventure. The obvious reasons are showing family or friends, sharing experiences from different cultures and a way to reflect upon the journey for years to come.

However, it takes an incredible amount of time and effort to create a great film, especially if you are a solo traveller, or trying to ride fast covering many miles. If you are riding with others, does the group dynamic allow space or time to record? Do you have the chance to have multiple takes?

I started creating films for my memories and as I started sharing them my approach to using all those hours of endless GoPro footage began to change. I listened to small comments people made, the one comment that especially stood out for me was, "I love the shots of yourself from the tripod, want more of them."

So, I set out to create more structured stories of my journeys to help and inspire people, endeavouring to make it look relatable and accessible for others to travel through our historic and spectacular landscapes.

I find talking to the camera helps fuel my story, and make my films personal and engaging.

I mostly travel solo, and it takes an enormous amount of effort setting up the tripod, running back to get my bike, ride past at speed, go back and get my tripod and camera, pack up and repeat. Each of these shots can take anything from 5 to 15 minutes to execute, so trying to do 15 to 20 tripod shots a day can eat up those precious daylight hours. 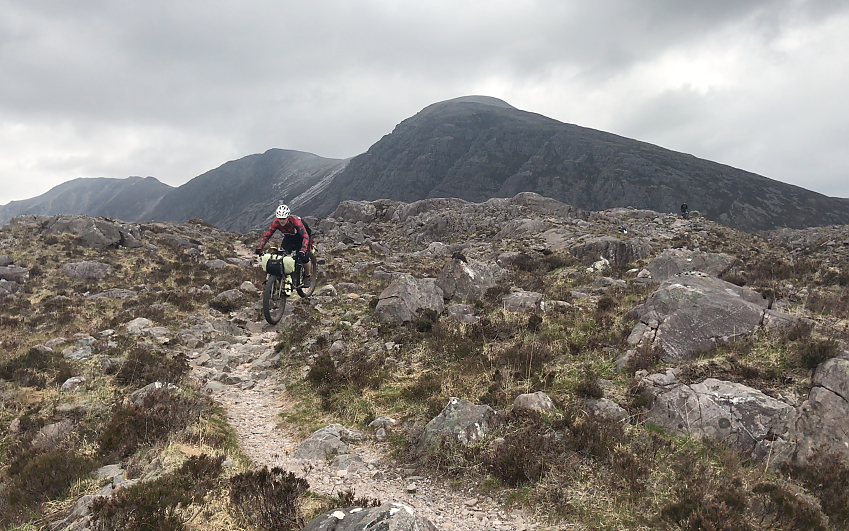 Barry Godin on one of his solitary bikepacking trips. Photo Barry Godin

Coming from a photography and art background, I have vistas in my mind that I want to capture myself riding through. With a critical eye, I strive to create these moving images with thought out composure. This desire encourages me to keep making the effort for those difficult and time-consuming shots.

Equipment: What kit do you need, things you shouldn’t forget, how do you transport it by bike?

I now use an iPhone for all my filming. I have found that when bikepacking, space is very limited with no spare room for a big SLR camera and lenses. The quality that comes out of most phones nowadays is outstanding. A golden rule to remember is: the best camera is the one you have with you. I have a top tube bag which I keep my phone in, so I can be filming very quickly and whilst riding along. The phone is also immediate so you do not miss capturing the action. Also, if you are using it to film your interactions with others it is not so imposing and can help in getting a more natural response.

A golden rule to remember is: the best camera is the one you have with you.

Tripods are essential, especially if you want to film yourself.

The Gorilla Pods are great, but I always struggled to find a rock or tree in the right place. I have now found a more efficient travel tripod that extends to a meter and a half, giving me more choice of angles and heights.

Moving shots, on the other hand, need to be as smooth as possible, thankfully many phones and action cameras have built-in stabilisation. Partnering these moving stabilised shots with locked-off tripod shots vastly increases the quality of your film and makes it far more watchable, keeping the viewers' attention for longer.

The most important key element to improving your film is taking care of your sound recording, a feature that frequently gets overlooked. It has taken me time to assemble a kit that works whilst travelling, and right now I use a stereo SURE MV88 microphone that plugs into my phone. This makes capturing great audio very easy and it is always synced to my visuals. High-quality audio does not just enhance the voice but captures the ambience of the location creating an immersive experience.

How to power all this equipment brings an additional complication. I use battery packs, multiple spare batteries, a front hub dynamo to the USB charger and occasionally a solar panel - if Britain ever gets any sun.

During my two week trip across Iceland, I took 20 spare GoPro batteries and 60,000 mAh of battery packs, which equalled an enormous weight, but it did mean we could stay in the wilderness for long periods without the worry of my cameras running out at a crucial time of the story.

What shots work and why? What shots aren’t worth the hassle? What errors can you avoid? What should you not forget to include?

Every shot you take has to fuel and help tell the story. A story is structured as a three-act narrative: beginning, middle, end or setup, conflict, resolution.

I start with a planned introduction, with me talking to the camera stating what the adventure is about. This aims to capture the viewers' attention and lead them to continue watching.

During the trip I try not to drive the film in any direction, just film what happens, things going wrong or unexpected encounters. This goes hand in hand with the essence of 'adventure' itself. Then when it comes to editing my footage, I start to mould it into an original story. This part brings out your unique style.

Do not force or fake it, you are who you are and that is what your audience wants to see.

I have this saying, “You can't film till you have edited and you cant edit till you have filmed.” What I mean by this, is that until you have found the skills of editing you will not know what to film.

I encourage anyone interested in making a film of their cycling trips just to go out, for instance when grocery shopping, film and create a short story of it, then go home and edit it. You will realise what shots you are missing, and which ones you have too many of.

It is with time and practice that you will learn what basics you need to cover when filming during your journey.

It is with time and practice that you will learn what basics you need to cover when filming during your journey.

Typologies of shots I cover which come very helpful in the editing process are time-lapses, images whilst riding, action points of view, narrator shots, voice-overs that are live or in post and environment/wildlife shots.

Filming when the real adventure becomes tough, is incredibly challenging. More in the case of the progression of the bike journey, I have learnt to constrain filming when emotions or time restraints are running high. In these cases, you can then produce a recap of the dramas at a later time and reflect on them.

On the other hand, if you can take the time to capture the demanding times it will create a compelling moment!

Why editing is important and what length do you recommend?

This is such an interesting question. The modern attention span has seemed to become shorter, and in advertising, it is down to just seconds to grab the viewers’ interest.

For adventure films, there has to be something to grab the viewer from the start, whether it's a particular filming style, ambience or key element to the story told. Some films use a jump back style where they start from a displaced climatic moment, seizing our attention, then restarting from the beginning to tell the story, but from the first moment, you are hooked.

Be brutal and analytic when editing. I cut shots very short, especially if they are just filling in space and not help in the telling of the story. Then, learn when to give the film space and moments to breathe. It all needs to balance.

When releasing my films into the world, I feel a sense of freedom.

I work so closely to the final production, that when it is out on the internet I step back and I start to view them from a different perspective. This is the moment when I can let my appreciation to come. Without focusing on mistakes and needed improvements, I can simply enjoy reliving the journey through my film.

So, don’t dwell in the editing process. Finish your film, this is your main target. Then, learn where you would like to improve and take this on to your next film.

Get others to watch your film, ask for feedback and listen to it. Play the film to family and friends and watch their attention span, if they start to drift off, maybe give the film a trim. Watch other peoples films with a critical eye, borrow techniques, try them out and see if they work for you: we all evolve off of each other's creativity.

Most of all, enjoy the adventure, don’t let the filming take over.

And most of all, enjoy the adventure, don’t let the filming take over as it is your enjoyment that people want to watch and relate to.