The Salar de Uyuni in Bolivia is the world’s largest salt lake, a pristine plain the size of Jamaica. Steve Fabes explored it by bike.

When Neil Armstrong gazed upon the earth from Apollo 11 in 1969, his eyes were drawn to a crimped white patch, embedded in the Andean mountain range of South America. As one of the brightest marks on the planet, he assumed it was a vast sheet of glacial ice. In fact, he was staring at Bolivia’s Salar de Uyuni, the earth’s largest salt lake, and now one of the star attractions of South America’s deeply rutted Gringo Trail. When I saw photos online of cycle tourers gliding across this road-less expanse of pure white salt, I put the Salar at the top of the places I wanted to visit when I toured the world.

That decision – to cycle the length of six continents – was made one sunny afternoon at a London pub, pint in one hand, mini-atlas in the other. Two-and-a-half years later, I arrived in the town of Uyuni in Bolivia. Many travellers book a jeep tour there to traverse the bleached hinterland, which lies at a slightly hypoxic 3,650 meters above sea level. Fellow cycle tourer Nicky and I left town on two wheels instead of four.

‘Look there! Over there!’ Nicky wobbled wildly as he took one hand off the handlebars and motioned frantically to a thin belt of lustrous white to the west, wedged between the horizon and a featureless expanse of brown earth. Where the white begins, I thought, it doesn’t end for a hundred miles.

Geologists will tell you that the Salar de Uyuni is a remnant of a massive lake that dried to a crispy crust of salt around 40,000 years ago. The Aymara people, indigenous to the Bolivian Altiplano, have another theory. Legend talks of three giants named Tunupa, Kusku and Kusina. Tunupa married Kusku, but Kusku eloped with a lover, Kusina. Grieving, Tunupa started to cry while breast-feeding her son. Her tears mixed with the milk, flowing out to create the Salar. Meanwhile, the giants themselves turned into the surrounding mountains. I could the summits of these as we approached, poking above the horizon like a gum-full of crooked incisors.

Just over 16 miles from town, we said goodbye to our sandy track and improvised our own off-road route. It was slow going at first as a carpet of mud had smothered the terrain between us and the white edge of the Salar in the distance.

The dirt morphed into an endless azure plain, one of the natural world’s most impressive optical illusions. During the wet season, the nearby Lake Poopó overflows and floods the Salar de Uyuni. When we were there in May – the transitional period between the wet and dry seasons – a portion of the Salar remained below a shallow pool of water, which mirrored the sky above. We stopped and stared at the surreal spectacle of a couple clouds drifting across the water, then disappearing beneath a stationary jeep.

I had been forewarned of the corrosion and broken spokes that sometimes afflict cycle tourers in the weeks after biking the Salar."

Further out and within the water, snake-shaped mounds of salt protruded. While I assumed we could pedal across without getting saddle deep in brine, I shuddered to think what the salt might do to my bike. I had been forewarned of the corrosion and broken spokes that sometimes afflict cycle tourers in the weeks after biking the Salar and I made a mental note to hose down my bike afterwards.

The blue sprawl gave way to a gleaming white honeycomb, where tiny ridges of salt marked out the edges of bright white hexagons, the so-called salt tiles. The ground beneath my wheels was firmer but there was a disconcertingly frangible feel to the salt crust, as if I were riding across the frozen surface of a lake. But worry was tempered by excitement. We ignored both the GPS and the jeep trails and headed simply ‘across’.

The Salt Hotel faded back into the hallucinogenic jigsaw of tiles, which were soon fused to every horizon."

It wasn’t long until a building loomed up out of the blank canvas of the Salar. At the Salt Hotel – constructed from a pinch of the 10 billion tons of salt here – we scoffed chocolate and guzzled coffee before pressing on. In our wake, the Salt Hotel faded back into the hallucinogenic jigsaw of tiles, which soon became fused to every horizon. Even the most clichéd description of the terrain as pancake-flat doesn’t come close to communicating how perfectly level the surface of the Salar is.

The salt crust is smoothed by annual flooding; pick any part of the Salar and you will find few square miles on earth which are as flat. It was this feature of the terrain that inspired Nicky and me to initiate a game in which we threw our arms in the air, closed our eyes and wobbled blindly over the salt. In the darkness I could hear a light-crunching sound as the salt crumbled under tyre. When I rumbled to a halt, a thundering silence took its place.

At dusk we were still pedalling as a full moon rode the eastern horizon, illuminating a string of tourist jeeps returning to town. I could just detect the faint thrum of their working engines. Fiery and towering tropical cumulus bunched up in the northern sky, alight with the dregs of the day and the occasional flash of lightning.

For a while we framed photos, the final beams of sunlight stretching our shadows into the shape of strange insects, the denim blue of the sky mellowing under the white glow of the moon. A frigid breeze ended our photography session. We unpacked tents and sleeping mats and settled down for a chilly night. There was no need to pick a suitable spot; the entire salt lake was our camp ground.

It was hard to sleep. The cold was biting and the temptation to take another peek at the ghostly expanse outside my tent was too much to resist. Above us, the hazy streak of the Milky Way arced across a star-cluttered sky. When morning arrived I woke to find my metal water bottles ruptured by the solid expanding ice inside. The temperature was stubbornly still below freezing.

Knowing some exercise would remedy our cold and wooden limbs, we were soon back on the bikes and riding farther out into the Salar. Our spirited zigzag branded the crust of salt with a faint trail as we wove through a network of small holes that penetrated the surface, linking the crust to an underlying pool of brine.

The plan was to reach one of the so-called islands that lie toward the centre of the salt lake, the remains of the tops of ancient volcanoes where cacti now flourish and rodents scamper over rocks. But en route we met a film of water over the salt, which slowly grew in depth. Disheartened, we made an about turn. It was still a little early in the year to cycle right across the Salar.

Our disappointment soon waned. A tailwind gathered momentum and from a distance we spotted a gaggle of tourists mooning around outside their jeeps. They waved and hollered at us before snapping photos of each other doing star jumps and playing tricks with the depth of field. Nicky and I slowed to a halt, swiftly removed our clothes, and cycled past waving at the posse with gusto – perhaps leaving them wondering whether they really did just spot two naked men on bicycles or if it was all just a weird artefact of an oxygen-deprived mind.

Later, and fully clothed, we finally left the salt behind with a heavy heart, rejoining the mud and then the road back to Uyuni. I could see Nicky was a little dejected too. I envied the astronauts who looked down upon our planet and glimpsed the Salar de Uyuni, though the view was affecting enough at ground level. It’s an epic landscape, and the journey one I will never forget.

This was first published in the June / July 2013 edition of Cycle magazine.

Two airlines, TAM and Amaszonas, run flights from La Paz to Uyuni. Night buses also go from La Paz, the company Todo Tourismo is a popular option and the trip takes anything from 10 to 15 hours as much of the route is unpaved. An alternative is to take a bus to Oruro (4 hours) and then a train to Uyuni (which runs four times a week: book in advance).

From Uyuni it’s around 16 miles to the edge of the Salar and 5 miles later you will find the Salt Hotel. After about another 20 miles you will get to the island of Isla Incahuasi. The Salar is around 100 miles across.

It can get windy and the sun reflects off the surface so sun cream is essential. Altitude sickness is also possible, so rest in Uyuni first if you feel unwell.

Although the wet season varies, May to October is a good time.

We had a GPS but only a compass is required.

A four-season sleeping bag and a Leatherman to get the tent pegs into the salt. Suncream and sunglasses are essential.

Leave a little later in the year so that I could cross the Salar as well as the neighbouring salt lake – the Salar de Coipasa.

Steve Fabes began biking around the world in 2010. After more than 25,000 miles through 35 countries he is still only half way. Visit www.cyclingthe6.blogspot.com 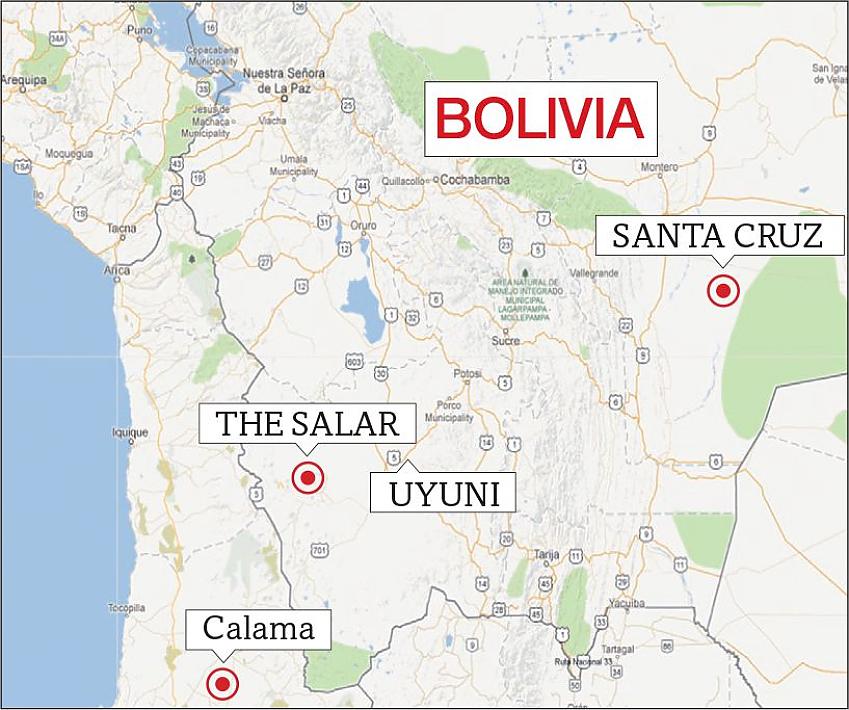