Sitting on top of the pass at Salvation Knoll (7,110 feet), I could see snow-covered mountains off to the east. From this very point in the 1880s, a group of Mormon scouts, lost and out of food, at last recognised where they were. They could see their destination, the Blue Mountains, only ten miles away. Hence ‘Salvation Knoll’. For us, it was convenient vantage point. Behind, we could see the rocky landscape of the southern canyon-lands of Utah, which we had been cycling through for ten days; ahead, another four days riding east would bring us into the foothills of the San Juan Mountains in Colorado.

The American West is one characterised by its vastness and emptiness. The monumental scale of everything, together with endless distant horizons, gives a new dimension to cycle touring. You’re aware of being a very small part of a much bigger picture. Perhaps the pioneers trekking west felt the same way.

My brother Pete lives in Santa Fe, New Mexico, and had been trying to persuade me for years to join him cycle touring in the American West. The Adventure Cycling Association (ACA) has the route across Utah scoped out as part of a longer trans-America route from San Francisco to Virginia, called the Western Express Cycle Route. The ACA map described our chosen route as ‘very difficult’, due the climbing, the lack of water, and the temperature extremes. 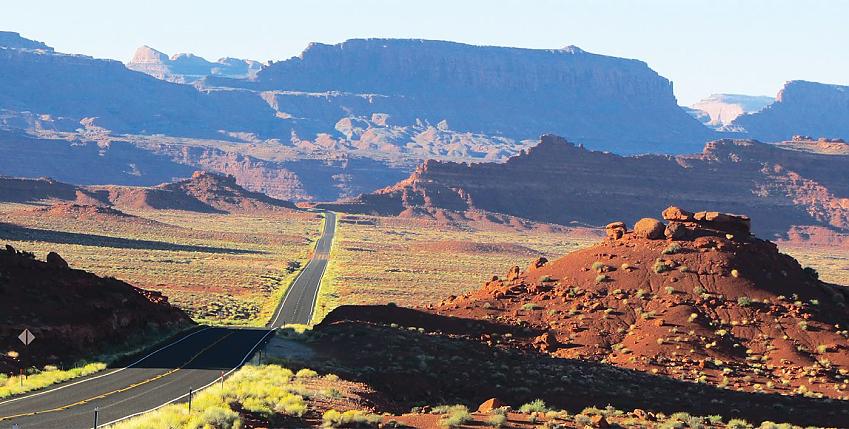 The road up to White Canyon on highway 95

We started by taking it easy, however. We set off just below the Cedar Breaks National Monument, Utah, part way up a very steep 4,500 feet climb out of Cedar City. I was keen to start at the bottom in Cedar City but Pete cautioned against such a steep ascent on the first day.

As we climbed, there were several viewpoints by the roadside that gave spectacular views down through the deeply-eroded rock canyons to the valley bottom. From the top of the pass, we had an exciting 3,000 foot descent back down to Panguich on the other side of the mountain. Speeding along at between 30-40 mph it felt more like downhill skiing than riding. There was little traffic, so we could enjoy the sweeping curves in the road as well as take in the scenery.

Drinking in the landscape

Our up-and-down route to Torrey took us on a north-easterly course for around 150 miles, mainly along the Utah highway 12. This stretch of road marks a boundary between two contrasting landscapes. To the north is the Dixie National Forest. To the south, the Grand Escalante Staircase National Monument, characterised by its eroded rock canyons, devoid of vegetation other than scrub bush and juniper.

It is a landscape of tall, red sandstone cliffs with pinnacles, towers and fingers of rock. There are buttresses and arches too – the road goes directly under one."

The 30-mile stretch between Panguich and Cannonville, running along Red Canyon, gave us our first real taste of Utah. It is a landscape of tall red sandstone cliffs with pinnacles, towers and vertical fingers of rock. There are rock buttresses and arches too - one that the road goes directly under.

Fifty miles further on along route 12, the road enters the Grand Escalante Staircase National Monument, comprised mainly of sand-coloured rock. The Boynton Lookout gave us a spectacular view across this vast, bleached terrain. The descent from Boynton Lookout was suitably thrilling, with a steep drop-off around sharp curves, down towards the Escalante River basin, where the watercourse irrigated a ribbon of greenery.

Talking of water, it was a challenge to bring enough water for drinking, cooking and washing. There were several stretches of the route where there was no habitation or water for up to 75 miles. We carried around 6 litres of water each, plus a water purifier pump, a ‘Steri-Pen’ sterilising tool, and iodine tablets.

On a dusty road

Camping wild is one of the most enjoyable aspects of a journey of this sort. There’s a real sense of being in the remote wilderness, despite the road nearby. You can watch the sun set and rise undisturbed. At one camp on a sandbar in the canyon of the North Wash to Lake Powell, I sat outside my tent and watched the wildlife at dusk. A raven flew up the canyon in front of the cliff face. Bats appeared, swooping and diving, chasing insects. Two huge butterflies fluttered above us in a tree. It is an almost Zen-like moment of tranquillity.

I sat by my tent and watched the wildlife at dusk. A raven flew up the canyon in front of the cliff face. Bats appeared, swooping and diving, chasing insects."

Travelling through this desert-like environment meant things got pretty dusty. The fine sand and dust got everywhere, especially inside the tent. Riding along with even the slightest breeze meant there was dust filming the air. We washed as best we could, in the river where there was one, with a flannel-wash where there wasn’t. We took hot showers at campsites and motels whenever we could. 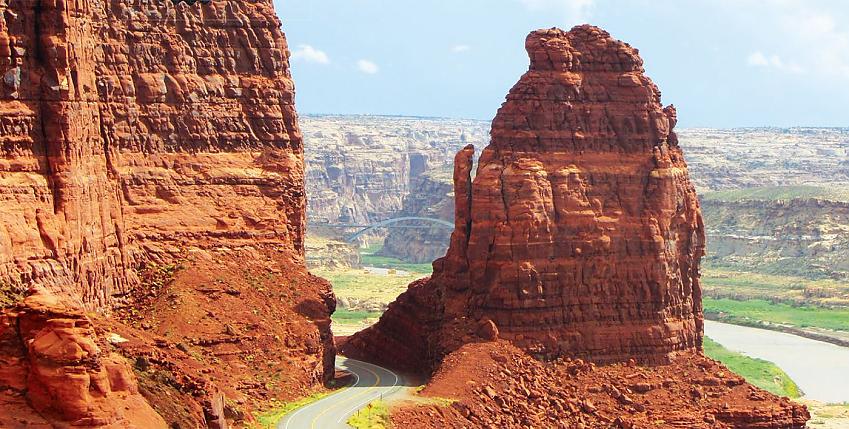 Highway 95 dropping down to cross the Colorado River near Hite

The temperature in summer can exceed 35-40 degrees, so we did our trip in mid-September; it was mainly in the mid 20s. Humidity levels were very low, however, which made for comfortable riding conditions. At night, the temperature dropped significantly, especially at altitudes of 8,000 feet (2,700m) and above.

Most days were clear and sunny, but we ran into some wilder weather near Lake Powell and again when entering Colorado. Fierce winds of around 50mph made cycling difficult. Clouds of red dust were whipped up. It was like riding into a sandstorm.

The wind also made camping tougher. In the worst of the stormy conditions, a friendly Park Ranger in Hite allowed us to camp out under a veranda at the back of the ranger station, so as to avoid the worst of the high winds and rain showers. Even in this dry semi-desert climate, it sometimes rains or hails furiously for short periods. Watching the storm pass over the whole of this enormous landscape gave us some great photo opportunities.

Out of the desert

Some of the best cycling of the whole trip was the day we cycled away from Hite. For several hours, we cycled through an empty landscape of orange rock bluffs, the road ahead disappearing into the horizon with no vehicles in sight.

Traffic was relatively light for much of route from Cannonville to Blanding. We’d see the occasional truck, then only tourists in cars, RVs, and on motorcycles. There was plenty of opportunity for overtaking traffic to give us a wide berth and pass us in the opposite lane.

We saw surprisingly few others cycle touring, just a handful over two weeks. Most were long-distance travellers. A Canadian couple we meet on the Hog’s Back near Boulder were from Quebec, on a three-year trip around the world with their eight-year-old daughter in tow (literally). A couple of guys we met in Panguich had just finished cycling from Alaska to Minnesota. 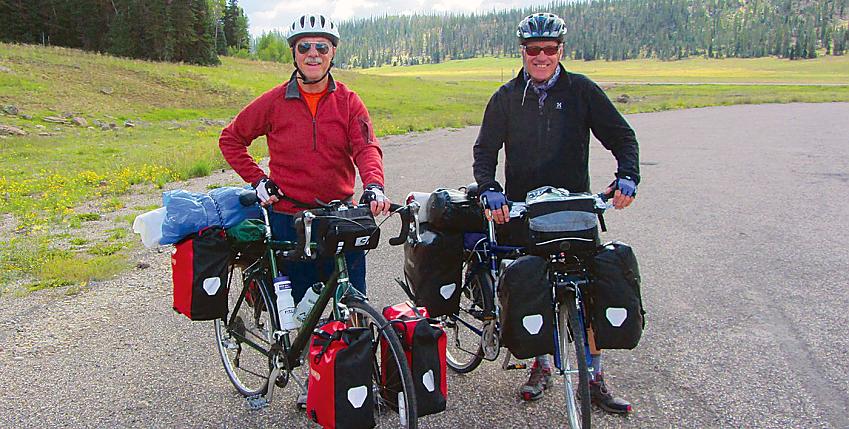 After Blanding, the landscape changed. We moved from the dry desert terrain of the canyon-lands into green farmland pastures. The scenery was less dramatic and the cycling less challenging – apart from the increase in traffic. Cycling out of Durango towards Bayfield, it was like riding along the hard shoulder of a motorway. With the disappearance of the hard shoulder at one stretch, the riding became even more precarious. Cars passed within inches. So after 577 miles, we called a halt in Bayfield and returned to New Mexico by car.

Back in England, however, my memories of the peaceful wilderness parts of the trip are undiminished. I’m now thinking of heading not west but north – to northern Norway.

Fly to Last Vegas (150 miles away) or Salt Lake City (250 miles) and drive to Cedar City using car or van hire. Carriage of bikes on planes to the US can be quite costly (around $150 one way). In terms of route, you could follow what we did or adapt the route to fit your available time. Best bits are Cedar City to Blanding. You might want to take in Zion and Bryce Canyon National Parks as excursions more than we did. Go in spring or autumn: it’s too hot in summer and too cold and snowed in during the winter. 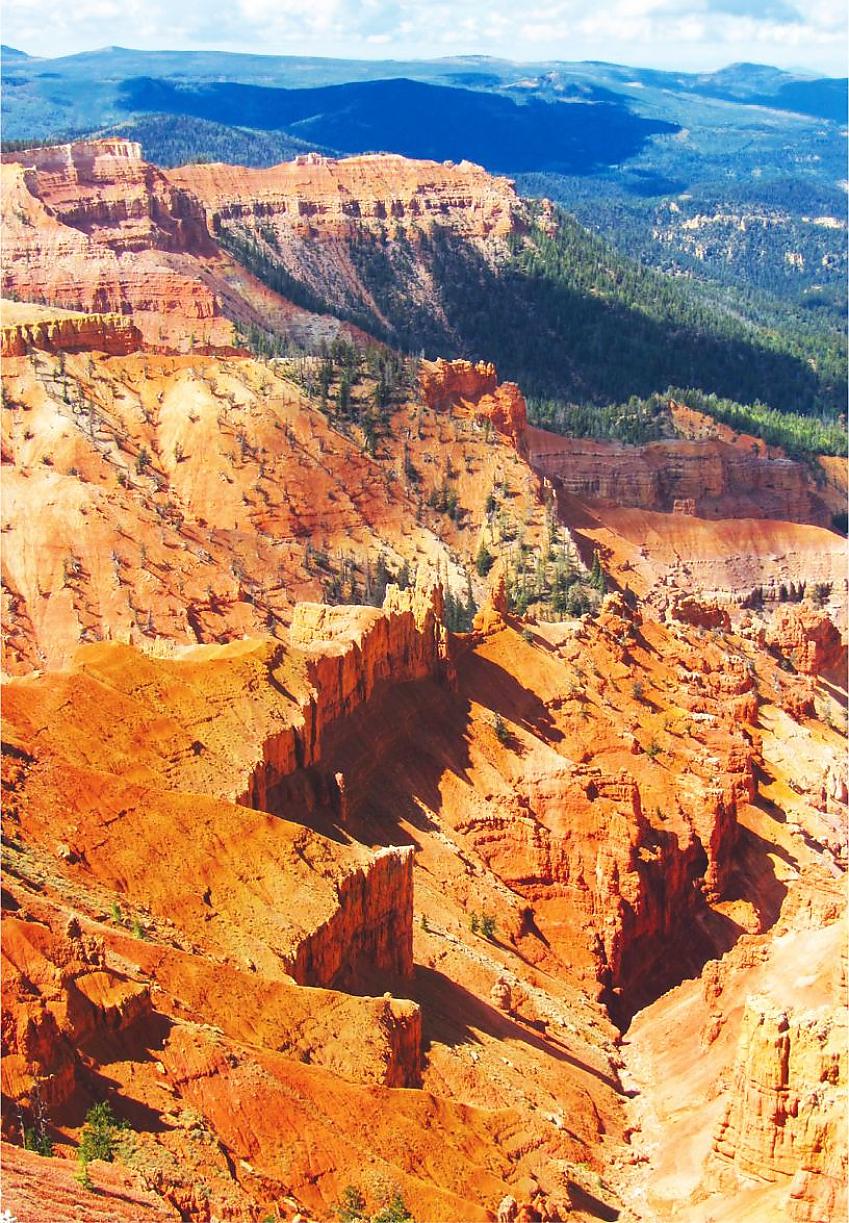 14 days of riding and one rest day.

Mainly camping wild or in campsites. State park campsites are better and cheaper than RV campsites. A few nights in motels.

ACA Western Express Bicycle Route – Section 3 Cedar City to Dolores. Fifteen 30-40 mile segments. Worth picking up some state road maps as well (AAA) for Utah and Colorado for an overview.

I flew to Albuquerque, New Mexico, then we were driven to Utah (9-10 hours).

Plenty of water bottles and some form of water sterilisation. Sun protection. A good sleeping bag and warm clothes (inc. hat and gloves) for high altitudes.

ACA adventurecycling.org/routes-and-maps. Have a look at Utah.com/national parks There is also a helpful cycle officer for the State of Utah: Evellyn Tuddenham, etuddenham@utah.gov. 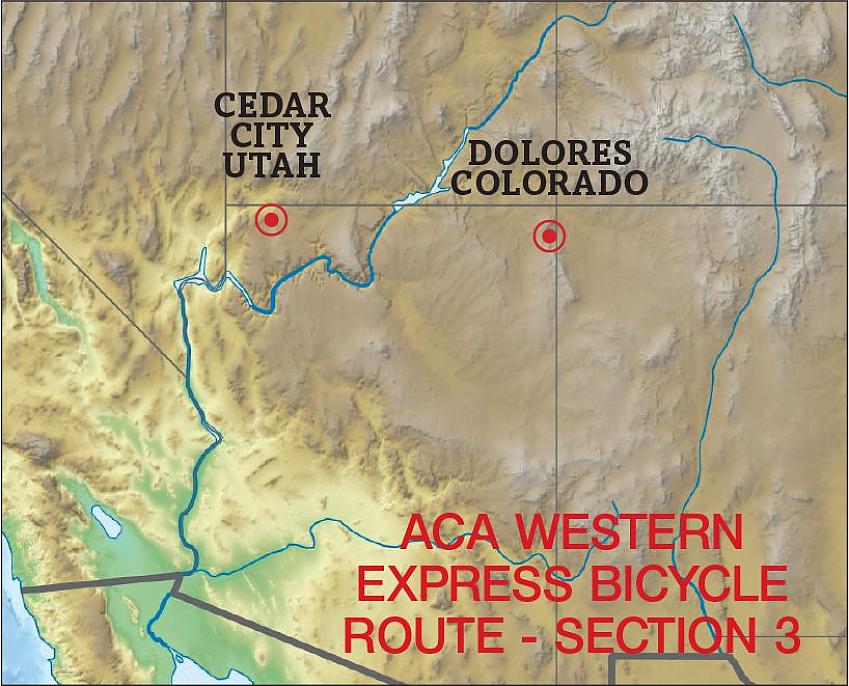