Cadair Idris is a tough ascent by mountain bike. Paralympian Karen Darke rode up it on a handcycle.

Mountains have always lured me. I was paralysed from the chest down in a rock-climbing accident at the age of 21. Cadair Idris, meanwhile, has a personal connection. Three months after my accident, my dear friend Will – rock climbing for the first time since I’d become paralysed – died when he fell in the Cwm of Cadair. He had talked fondly about Cadair many times; I wanted to see the cliffs that laid him to rest.

Back in 2009, I had attempted to climb Ben Nevis on a One-Off handcycle. Just a few hundred metres from Glen Nevis, I realised that I was deluded. Bumped and dragged by my companions along the ever more rocky path upwards, we camped the night at the halfway lochan. Next day we bailed out, taking a softer, heathery route down the mountain. I realised then that I wasn’t interested in summits if it meant being ‘luggage’ to get there.

‘The summit of Cadair Idris is up there, behind that ridge,’ Neil said, pointing high into the Welsh hills. Whenever I look up at mountains, I imagine holding them in my hand like a giant, exploring the contours, feeling the texture of the heather, the sandpaper roughness of the rock...

‘I think it’s about nine kilometres to get there,’ Neil said. I felt very small again: intimidated, anxious, already exhausted by the prospect of cycling to this distant summit with only arms for power.

It had been four years since I’d ridden a One-Off. It’s an off-road handbike that requires you to contort into a crouch and steer the heavy wheels with your chest. It’s a strange position to ride in. Your neck strains to hold your head up, your chest can get bruised by the steering pad, and your legs are bent and twisted beneath you.

‘Ready?’ Neil grinned at me, a bungee tied to his waist and mountain bike at the ready. ‘Okay if I tie this bungee to the front of your bike? Then we can zap along the approach track a bit quicker.’ It was more than okay with me. I knew how hard the One-Off could be along flat tarmac, relative to my normal handcycles.

Our goal was to ride to the summit of Cadair Idris and back in a day. There were four handcyclists, including me, and our early start gave the attempt its name: ‘Handbikes at dawn’. The inspiration, planning and organisation was down to Graham and Jackie O’Hanlon of Challenge Your Boundaries, which promotes all-ability mountain biking. Our trip would raise funds not just for Challenge Your Boundaries but also Aberdyfi Search and Rescue Team, Walking with the Wounded, and Mawddach Rotary Club.

Graham and Jackie’s hard work had attracted four of us to the car park that morning to make the attempt. Each of us had a small support team: one mountain bike leader and one or two others with outdoor experience; we’d probably need help at various parts of the route. (I had the good company of Neil, Andy and Alice.) We would each climb at our own pace with our team. Towards the summit, where the going got tougher, there would be other volunteers from the local mountain rescue and the nearby RAF outdoor centre.

Muscling up the mountain

By the time we reached the wooden gate that marked the end of the tarmac and the start of the climb, my shoulders were already on fire. I wanted to look at the map but knew if I did I’d just be demoralised; the summit was too far away to believe I could get there. I forced myself instead to focus on each crank of the pedals, to become absorbed in the circling motion, to watch the bits of gravel and stone on the track pass slowly by.

‘How are the arms?’ Alice had joined our group as we crawled steadily higher, onto grassy paths now, the valley already miniature below us. ‘Burning!’ I said. She massaged my shoulder muscles to ease the pain.

I guess some might ask why. Why put yourself through this? I wondered what motivated the other handbikers as I watched each of them crawl up the track: muscles straining, sweat dripping, determined grimaces. Maybe we were all on a kind of quest, searching for something high up there on the slopes of the mountain.

Each of the waymarks came and went. The sheepfolds, the top of the grassy slopes, the traverse, the first col. I cranked and cranked, absorbed, lost in time. I was always surprised when I paused and noticed our progress. Andy and Alice walked and talked and Neil rode when he could, the bungee and bikes still attached. They navigated me around off-camber lumps, through bogs and boulders, laughing, lightening the challenge with their jokes and support.

On the higher slopes, a team of volunteers awaited with strips of metal grid – sand ladders used to help 4WD vehicles out of trouble off-road. Our small team got bigger, the climbing more intense.

My internal monologue continued: ‘A chain-gang of volunteers with gridded ramps. Amazing, selfless volunteers... Where did they all come from? Their knuckles are bloody too. Everyone should wear gloves. I don’t want anyone to get hurt. Muscles really tight now. Maybe one could snap if it gets any tighter? Voices all around but my focus is intense, everything else just white noise. Crank, crank, crank. Keep cranking.’

Through all the sweat and pain of the effort, I never questioned why. I knew this was more than a quest for a summit; it was a pilgrimage in memory of my friend Will."

I felt driven like never before. Through all the sweat and pain of the effort, I never questioned why. I knew this was more than a quest for a summit; it was a pilgrimage in memory of my friend Will.

‘Almost at the edge of the cwm now,’ Andy said.

‘Crank, crank, crank,’ I thought. ‘Keep cranking. Suddenly we arrive. The summit rim. An amphitheatre of rock and a loch below. Loch? In Wales? Lake? Tarn? It is very black rock. Crumbly rock. It looks beautiful. It looks hellish. I think of Will falling. This is what I came to see.’

‘That’s the summit there.’ Neil pointed higher up the ridge, but all I could see was the assault course of boulders and scree between us and it. ‘We could just stop here,’ I nearly said. But I couldn’t get the words out. I’d be letting everyone down. I said nothing and went with the flow: summit bound. The shoving and pushing began, the craggy scree way too extreme for a solitary handbiker.

Top of the world

‘The summit is close now,’ I remember thinking, ‘but it’s getting steeper. Crazy steep. Impossible steep. Gears. I still have more gears! I hate the bike. I love the bike. I hate all the help. I love all the help. I want to make the summit. I don’t care about the summit. I smell the grass. I can almost taste the rock. I hear the rumble of scree beneath feet. It’s been a long time. Twenty years. Keep cranking.

‘It’s the final few metres. I’m crawling so slow I seem barely to move. It is steep and slippery and just about impossible to ride. I’m luggage now. I’m grabbed and pulled across the final few blocks of rock. And then I’m there, the reassuring concrete of the summit trig point cold against my shoulder.’

A cheer went up, then a round of applause. We swapped hugs in our small team. I was grateful to them for getting me there, despite being ‘excess luggage’ for the final stretch. Then the crowd dropped away, leaving me alone with the view. It stole my breath: clear and almost cloudless from the Irish Sea to the far reaches of Wales. It was unusually still. I breathed the air in full and deep; parts of my lungs expanded like they’d forgotten how. Such a special place.

This was first published in the October / November 2014 edition of Cycle magazine.

No, not handcycling up Cadair Idris! There are trail centres where you can try out off-road cycling as a disabled rider. Cycles and suitable trails are available at Coed y Brenin and Dalby Forest.

For more about all-ability off-road cycling, and more, go online:

Karen blogs about handcycling at www.karendarke.com/blog

After the road ends, it’s a bridleway all the way to the top. The wide track ends at 4km, then it’s a grassy (occasionally boggy and off-camber) path to 6.5km. It’s rockier from there on to the summit.

The weather for Handbikes at dawn, which took place in April, was excellent. But it can be changeable at this height, so pack accordingly.

Karen used a One-Off handcycle (www.oneoffhandcycle.com). New ones cost $6200 plus shipping from the USA.

Kings YHA is nearby. Plenty of B&Bs in Dolgellau.

Coed y Brenin and the Mach trails near Machynlleth are close by, as is The Mawddach Trail for more sedate cycling.

A great support team, sun cream (in April!), and a gel pad on the One-Off handbike. The bike includes a chest steering mechanism, which can be sore without extra gel padding to protect the sternum.

Less fear on the steep rocky descent off the summit. Some sandwiches – I managed on energy bars, but there’s no substitute for a bit of ‘real’ food when you’re expending that much energy. 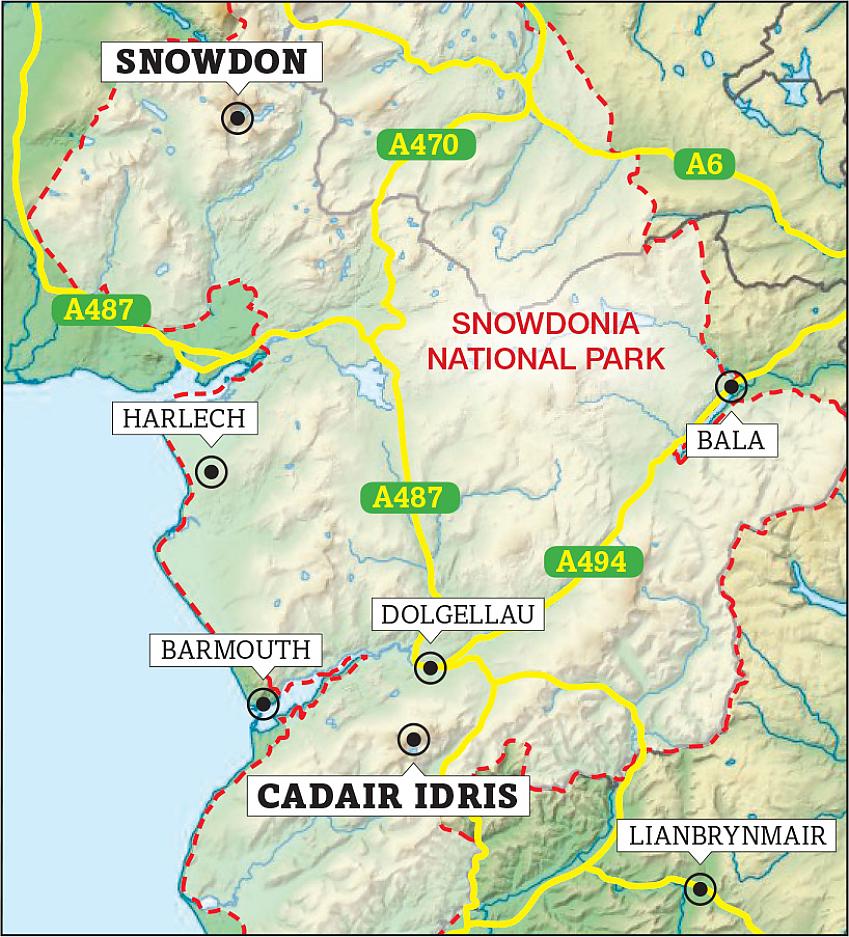