Riding the Alps down

Claire with the bikes at Chateau Chillon, Montreaux. The upper Rhône valley is ahead
By cotterell
Tuesday, 1 October 2013

Riding the Alps down

Cycling UK members Steve Kinsella and wife Claire wanted Alpine scenery without too much climbing. So they went to Switzerland, where ‘uplift services’ are everywhere.

At hairpin bend after hairpin bend, the bus driver sounded his horn and spun the steering wheel. We seemed to hang over the edge. We were climbing the 2,600-metre Grimsel Pass the easy way, overtaking a few cyclists in the gloom. Our own bikes were on the back of the bus. Then we caught sight of the massive Rhône Glacier, glinting in the sun on the mountainside across the valley. ‘That’s it, the source of the Rhône,’ I said.

A Cycling UK tour in the French Alps the year before had made us want to cycle in mountains again. But we weren’t sure how quickly Claire would recover from a bad back. We decided to go to Switzerland, which has a public transport system that runs like clockwork and takes bikes. That way we could cycle as much or as little we wanted.

But which bit of Switzerland? Claire had pointed to the map: ‘The River Rhône starts high up in Switzerland, flows into Lake Geneva and onward through France to the Med. From the lake, we can go up to the source of the Rhône then back down the pretty Simmental valley where we walked through flower covered summer pastures, years ago.’ We were decided.

We arrived at Lausanne by train, unpacked our bikes in our ample room and left our bike bags at the hotel for our return. Our tour began alongside Lake Geneva, blue and sparkling, and passed Chillon castle. With the mountains ahead, we rode in the sunshine on the floodplain of the Rhône to Martigny. There we took a train for a few kilometres, cutting out the industrial zone.

We pedalled by the now small and foaming Rhône river, stopping to explore timbered villages in the steep-sided valley. At our hotel in Ernen, set among a jumble of 17th century wooden homes and farm buildings, we were woken up by a strange noise at 5:00am. We peered down and saw musicians serenading different parts of the village. It was a saint’s day. We were ready for an early breakfast, but although everyone else was up, the hotel proprietor wasn’t, so we breakfasted at the bakery. The baker lady seemed used to this and told us she would settle with the hotel.

We rode through upland fields and woods in glorious sunshine, criss-crossing the babbling Rhône over little bridges. On a mixture of tarmac and unsurfaced gravel tracks, we travelled to Oberwald. And then we had to get across the mountains to the Simmental valley. Our route was the Grimsel Pass... That’s when we boarded the bus with our bikes.

Past the snow line

The bus climbed into the clouds. There was snow on the rocks by the roadside. Eventually we were on the level alongside an icy black and threatening lake, Totensee (‘Dead Lake’). The bus stopped. We got off, took down our bikes, and chatted to the cyclists we had passed earlier.

After a warming coffee in the café, and wearing everything we had, we descended past impressive but ugly hydroelectric works, past blue gentians on the snow line, down into green grass, sunshine, and meadow flowers again. We eventually stopped at a café to unfreeze, and then followed the valley to Meiringen, the home of meringues.

We passed the funicular to the Reichenbach Falls, where Sherlock Holmes met his end, and entered a wide valley, with waterfalls cascading from vertical cliffs of purple rock."

We passed the funicular to the Reichenbach Falls, where Sherlock Holmes met his end, and entered a wide flat valley with waterfalls at the sides, cascading from vertical cliffs of purple rock. We arrived at our B&B, were welcomed by a talkative anglophile landlady, and had rosti, a cheap and energy-filled meal of fried potatoes, egg and vegetables, in a local eatery.

Next day we were on a bus again, making a beautiful and tortuous climb to Grosse Scheidegg at 2,100m. Again we felt like cheats as we had coffee with cyclists who had done it the proper way. We did ride down. Only post-buses and bikes (and it seemed one or two locals’ cars) are allowed on this pass, which is just wide enough for a bus. Cyclists ascending or descending are warned to stop for the buses.

We made the twisting descent into grassy meadows, through Grindelwald, and had afternoon tea in the sun. Then we continued along one of the many narrow original roads that have now become designated cycling routes, rising and falling along the valley side, avoiding the main motor road.

Our day ended when we reached Wilderswil, near Interlaken. From our hotel balcony, we watched the snow-clad peaks of the Monch, Eiger and Jungfrau change in colour as the sun slowly set.

For a day off the bikes, we took a cog railway ride to Schynige Platte, a high floral plateau. There’s a place to borrow walking boots for the day, so we followed marked trails on the ridge on foot. The sky was clear blue and we looked out over white peaks in all directions. Down in the valleys, the transport system was a perfect model railway, with buses, several gauges of track, funiculars and cable cars all moving in harmony.

Back down, we cycled the Lauterbrunnen valley, a beautiful chasm with the mountains towering above, then we headed along the Thun lakeside. As we neared the Simmental valley, the sky darkened and a storm broke. For a few days, mountain tops were shrouded in mist and rain, but there was beauty in the clouds scudding along the dark green tree line and the flower-garlanded wooden buildings in which we stayed. As we climbed from the Simmental into Gruyere country, with its rolling majesty and even more cows, the sun shone again.

Too soon it was the last day. There was Lake Geneva again, blue under a cloudless sky. We dropped down, down, and down an exhilarating series of hairpins to the lake at Vevey, where we ambled along the lakeside promenades in the sun. Returning to the starting point of our tour via the main road, traffic was light as it was a Sunday and for the first time we saw many road cyclists on carbon fibre bikes.

After repacking our bikes, we took an underground train for a last evening meal by the lakeside.

‘How’s your back?’ I asked Claire.

‘What?’ she said. ‘I’d forgotten about that since the day we left home!’

This was first published in the October / November 2014 edition of Cycle magazine.

Switzerland is quite expensive, but there are things you can do to limit spending. Swiss hotels have a generous breakfast, which we made last until tea-time. Restaurants were happy to divide a meal onto two plates, which for relatively light eaters halved the cost of evening meals. Other tips for economy are to eat before 6:00pm at the ‘day’ rate (which we didn’t find practical) and to use supermarket cafés. Swiss trains, while very efficient, are not cheap. We had pre-bought half price travel cards.

Navigation is important. Switzerland is a densely populated country and main roads where there are no cycle lanes are best avoided. The cycle network is not always well signed and has many junctions.

Mountainous! In Swiss valleys you can have a flat ride, but a small detour can add 1,000m.

Passes can be closed between October and May.

We pre-booked all our accommodation online.

We took lightweight road bikes, one (Steve) carrying the luggage. To get the most out of the scenic heights, mountain bikes (and walking boots) would give more flexibility.

Created our own GPS routes to follow. I planned the whole route using the maps on the website http://veloland.myswitzerland.com/en/veloland.html

Purchase the Swiss GPS contour map for £200. On-the-fly routing would have saved lots of time. 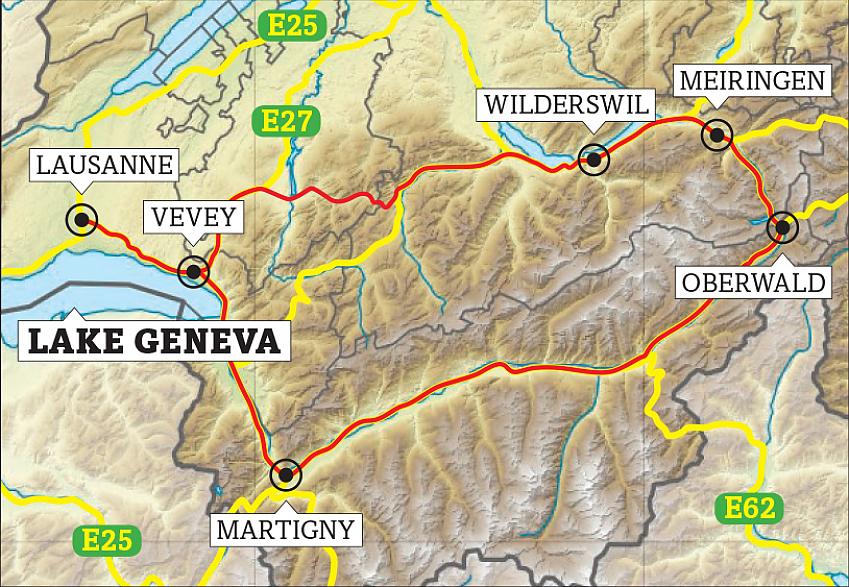