Cycle-proofing is about fixing the problems of the road network, particularly those routes that carry lots of traffic. Cycling UK Campaigns Officer Chris Peck explains.

Last issue, we briefly profiled the concept of ‘cycle-proofing’, announced by the Prime Minister last August. In a government statement that appeared at the time, there was a specific commitment to cycle-proof new trunk roads ‘so they can be navigated confidently by the average cyclist’. In Wales, the Assembly has already gone a step further, passing an Act that places a duty on promoters of major schemes to accommodate cyclists properly. These could be excellent steps to making cycling mainstream – if they actually happen.

The major road network is a problem for cyclists. it’s dangerous – and it severs minor roads and bridleways.

The major road network is a huge problem for cyclists: the risk of death while cycling on major rural roads is 28 times greater than on minor urban roads; and driving on these roads is almost 50 times safer than cycling. But it is the severance that these roads cause – cutting across minor roads and bridleways – that presents an even bigger problem. So far, the commitment to cycle-proofing means there is almost £20m over the next couple of years to fix a handful of sites where cycle access, or safety, is poor. 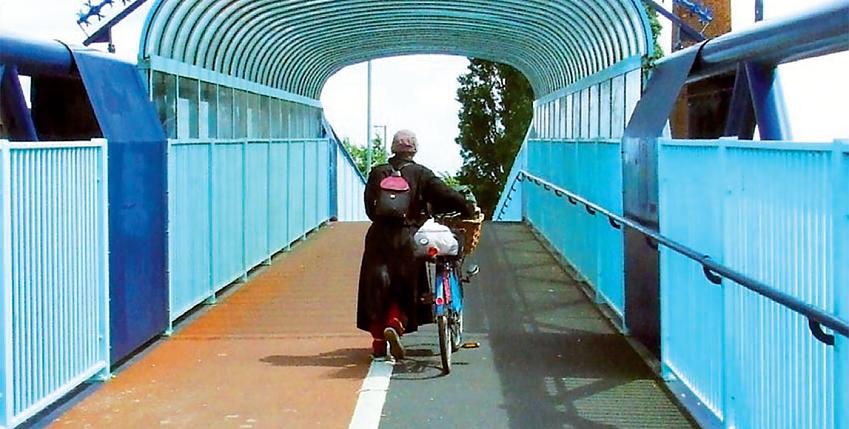 Meanwhile, the Chancellor has announced vast expenditure on upgrading the road network – tens of billions of pounds over the next 10 years. If not properly cycle-proofed, these new roads could be disastrous for cycling: new, fast roads make driving easier, while the extra traffic generated means cycling becomes worse on the local roads on which every car trip inevitably begins and ends. In addition, where roads are widened, cycling is often ignored or marginalised – with small junctions replaced with large roundabouts or slip roads.

In one egregious example from Wales, a bridge carrying a major road between Penarth and Cardiff excluded pedestrians and cyclists altogether. Private car travel was prioritised over sustainable modes. Only recently, after years of waiting, has an alternative bridge been provided (on a less convenient alignment…) thanks to Lottery funding for the Sustrans Connect2 project.

Even where there is a commitment to do things well, it can go badly wrong. A recent upgrade of junction 13 of the M1 between Bedford and Milton Keynes, accommodating a widened and up-graded A421, has been the source of continual problems, which local Cycling UK volunteers have been battling for years. There was an opportunity to provide high-quality cycle routes, linking employers such as Cranfield University and Amazon to residential areas, as well as giving leisure cyclists a way of crossing busy roads safely.

Yet Cycling UK’s local campaigner on the junction, Alan Sprod, says: ‘Instead of being a benchmark of success, the cycle route has become a case study of how to waste money on an inadequate and unsafe scheme.’ In his view, ‘A safe cycling route should have been an integral part of the A421 scheme, funded by the Highways Agency.’ 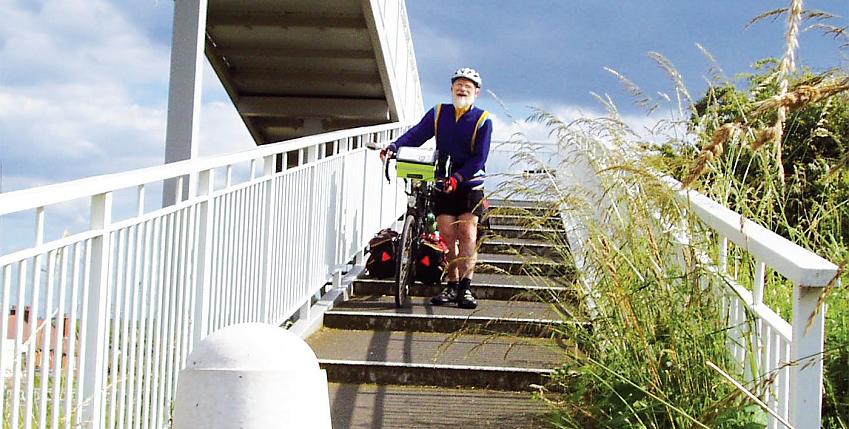 Footbridge provides an inconvenient but safe A1 crossing

What was previously a country lane cycle route now has to cross two slip roads to a dual carriageway. The route also drops cyclists at a new, hazardous roundabout and a terrifying junction where, to reach the cycle route, users must merge into, then cross over, the path of two lanes of traffic trying to get onto the M1. A Kafkaesque arrangement of signs directs cyclists onto routes, some of which they aren’t permitted to use. Despite spending hundreds of thousands of pounds on cycle paths and bridges to cross a new stretch of road, the route is utterly inadequate, with missing sections and cyclists expected to ‘dismount and dash’ across lanes of fast moving traffic.

‘What is disconcerting,’ Alan says, ‘is the fact that the cycling route has so many deficiencies that I see cyclists disregarding it and using the main roads.’ He feels he was ‘duped’ by the Agency’s assurances that a safe cycling route would be created. ‘This quite clearly has not been accomplished.’

While the Prime Minister’s cycle-proofing commitment may hold for the major road network in England (and only England), when it comes to local authorities, which control 97% of the total road network, the problems for cyclists are innumerable. And the safeguards are weaker. The government’s position is to ‘encourage’ local authorities to ensure cycling is considered. Cycling UK is pressing for changes to ensure that cycle-proofing does happen locally.

In recent discussions with the Department for Transport, Scottish Government and local authorities, Cycling UK has argued for two prerequisites. Firstly, local authorities need better guidance and flexibility in government regulations to permit simpler designs and traffic signals. Stronger guidance – and training for traffic engineers – on what works, and cheaper, simpler means of achieving it, will help strengthen the hand of local politicians prepared to reallocate road space away from people in cars and give it to people on bikes

There needs to be much more funding for better infrastructure. at least £10 per head, per year, is necessary.

Secondly, there needs to be substantially more funding to build better quality infrastructure – space for cycling on every major road and less traffic, travelling slower, elsewhere. At least £10 per head, per year, is necessary. That’s roughly what has been spent in the cycling nirvana of the Netherlands for 40 years (in some years it’s been much more), and it’s what’s planned for expenditure in London for the next decade. 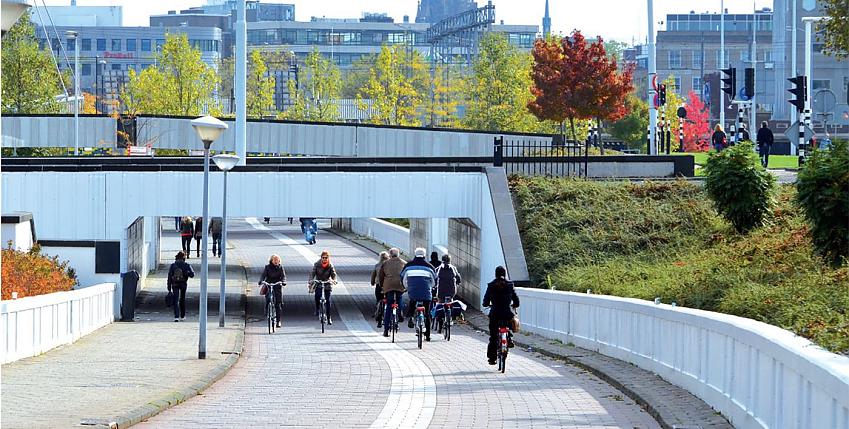 The Prime Minister’s announcement of £94m for eight English cities in August last year provides £10 per head in those cities, for a couple of years. Outside those areas, barely a handful of places are spending any of their rapidly diminishing discretionary funding on cycling provision, despite the millions of fine words in thousands of local government transport policy documents.

So where can we find the £10 per head – £600m across Britain – each year? Currently, cycling is funded through a combination of central government grants, local authority cash and ‘planning gain’, the ‘bribes’ offered by developers to allow them to build.

There is another potential source of funding for cycle-proofing. Over £1bn is spent across the country on resurfacing and repairing local roads each year. If the needs of cyclists were considered in these resurfacing programmes, then new facilities or changes to junction priority could be included at minimal cost. Simple steps, like laying out roads to have uphill ‘crawler’ cycle lanes, would cost virtually nothing.

It doesn’t just mean maintenance, of course. Like the high priority national projects, local authorities often build new roads and new public transport infrastructure, as well as permitting changes to roads to incorporate the desires of developers. Each new project represents an opportunity to make improvements for cyclists – which is usually squandered.

In Manchester, where £30m is being spent on new cycle routes, hundreds of millions are being spent on new and extended tram lines that may have cycle parking at stops (bikes are banned on board), but force cyclists off the road onto utterly inadequate and fiddly crossings.

In Oxfordshire, despite tenacious campaigning from the local Cycling UK representative, a rail enhancement between Bicester and Oxford will close bridleways, forcing users into long diversions. These problems occur because local authorities only consider cyclists at the end of the project, rather than at the outset.

Whether it is new national infrastructure, such as the new A14 in Cambridgeshire, HS2, or a proposed M4 diversion around Newport in South Wales, Cycling UK campaigners around the country will be working to try and ensure that the cycle-proofing promises are realised. But for cycle-proofing to mean something other than a nice phrase from the Prime Minister, it will take commitment from individuals at every level of government, stronger direction as to what must be done, and – crucially – grassroots efforts from Cycling UK and campaign groups to maintain the pressure.