The club journal has come a long way from its first appearance as a one-page circular to its current Cycle magazine format.
By Sheila Hanlon
Friday, 6 January 2017

Did you know we’ve been publishing a version of our popular Cycle magazine since 1878? Cycling UK’s historian Dr Sheila Hanlon takes a look back at the earliest editions of the magazine that was sent to members in the 19th century

Cycling UK's magazines, which have run nearly uninterrupted since 1878, are an unparalleled source of club history and a repository of cycling past.

The club journal has come a long way from its first appearance as a one-page circular to its current iteration as Cycle magazine. Its evolution occurred against a dramatic backdrop of changing bicycle technology, turbulent club politics and world-altering events. The legacy of Cycling UK's magazines is as gripping to read as their pages themselves.

A club journal was high on the agenda when the Bicycle Touring Club (BTC) founded in August 1878. The Bicycle Touring Club: 1st Monthly Circular appeared in October 1878. Honorary secretary Stanley Cotterell, then a medical student living in Edinburgh, single-handedly produced the brief and business-like publication.

His one-page, double-sided circular, with its simple black and red text, focused on organisational details. It announced the BTC's formation, badge ordering details, revisions to club rules, and that a monthly list of tours would soon be published.

More detailed club news, it promised, would appear in Bicycling Times and Bicycling magazines. Members were encouraged to recruit others, since: "We must remind you how necessary it is for the club to have a great number of members."

Later editions extended coverage to hotel recommendations, consul elections, uniforms, dangerous hills and lists of candidates for membership. The council considered the club magazine important enough to protect its publication and free distribution to members in its constitution.

Something bigger soon grew out of the circular. Secretary W D Welford assumed editorship from 1879-81, applying his expertise as editor of the popular magazine Cycling. Welford raised the tone and quality of the journal, moving production to his Newcastle-on-Tyne press office.

This was a much-needed revenue generator for the circular, the cost of which had become a financial concern. To help cover expenses, members who wished to receive the BTC Circular were also asked to provide self-addressed stamped envelopes.

By December 1879, BTC could no longer afford to produce the circular. Luckily, Welford came to its rescue by publishing it as an insert in Cycling magazine, which he did for the next eight months. Not everyone agreed with the move, though.

G Lacy Hillier, elite cycling racer, raised an objection to the arrangement at the BTC's Annual General Meeting in 1880, commenting that the club journal should be independent, rather than reliant on Cycling for circulation. He accused Cycling of monopolising BTC news, and questioned the relationship between BTC and the magazine.

Veteran club member W B Tanner dismissed Hillier's conspiracy theories, responding: "Well, I think everyone knows what the 'connection' is," – to which a hearty 'Hear, hear!' rang out from the floor – "Mr Welford is the secretary of this club, and he is the proprietor of Cycling."

Turner added that using one office for both publications was cost effective, saved postage and cut labour, making it a worthy compromise.

The journal regained its independence later that year, relaunching in October as The BTC Monthly Circular and Official Gazette. Welford remained under scrutiny and, when his monthly salary was cut from one penny per member to three farthings per member in 1881, he resigned as secretary and editor. 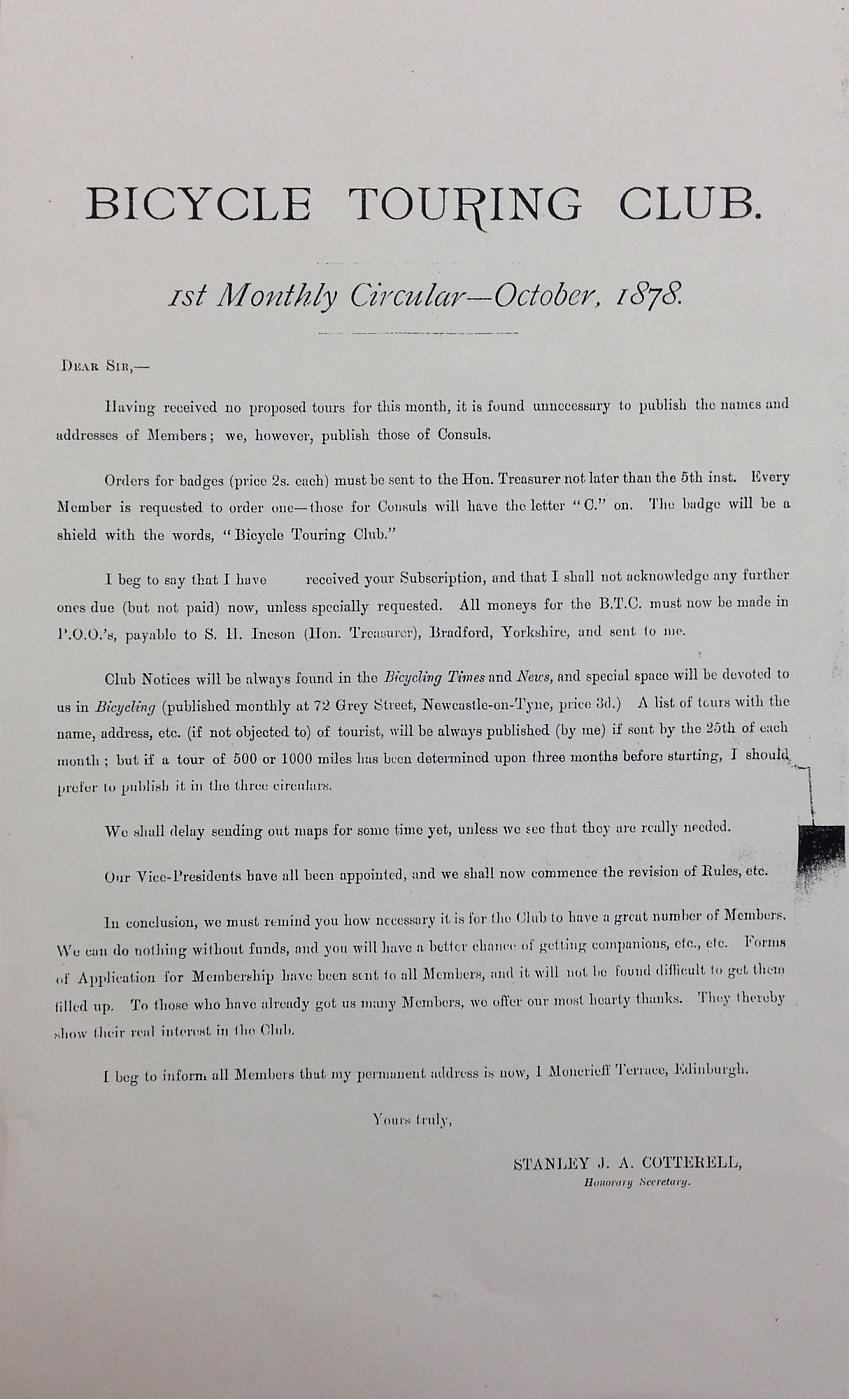 E R Shipton and the golden age of the cycling press

E R Shipton replaced Welford as editor, later becoming joint secretary/editor in 1883, ushering in a new era in the magazine's history. S A Auty, a printer by trade from Bradford, managed production and secured a cheap printing contract.

Under Shipton's editorship, the BTC Gazette took a decidedly journalistic and professional turn. Its publishing headquarters moved to 139-140 Fleet Street in London, the hub of the Victorian press world.

The title changed again in 1882, to BTC Gazette and Official Record. The blue and white cover was revamped with an image of a man on a penny farthing and a woman on a tricycle, plus Goy's calendar of sporting events.

The new name clarified the journal's dual purpose as an outlet for both official records such as AGM minutes and cycling stories covering such things as scenic country rides.

In 1884, the journal was rebranded the CTC Monthly Gazette and Official Record. This reflected the decision the previous year to rename the organisation the Cyclists' Touring Club to acknowledge not just high wheelers, but all cyclists, including tricyclists, many of whom were women.

In 1886, a competition was held to design a new masthead. The winning entry showed the club badge and a collage of cycling images, books and maps.

Shipton's improved CTC Gazette had a dark side: it was injected with his own personal politics. As a result, a libel action was brought against the gazette in 1889 over comments Shipton made about Edward Clarke's unsuitability as president of the Harrogate Meet. The CTC lost the case, costing the club £659 and revealing weaknesses in its administration, constitution and deference to rule by secretary.

The libel case cast a long shadow. It was even hinted at in Shipton's CTC Gazette obituary published in March 1923, which noted that he was "best remembered in his capacity as editor of the CTC Gazette [and] though rather too much inclined to regard the gazette as the vehicle of his personal views, there is no doubt that he made it a periodical of great influence and interest".

Despite the legal fiasco, Shipton remained sole editor of the gazette until 1891, when H T Round was appointed joint editor. Round died a few months later, leaving Shipton on his own again. In 1896, C L Freeston, a seasoned travel writer and Alpine tourist, became assistant editor.

Freeston bolstered the touring content of CTC Gazette and saw the journal through a difficult patch in 1897 when Shipton was absent for several months due to a breakdown. His personal and health failings aside, Shipton was a competent editor, and club numbers and finances were healthy, so there was no impetus to replace him.

'The Wheel Wanderings' column covered tours of the Pyrenees, Channel Islands and other destinations. 'Multum in Parvo' offered musings from the world of cycling, and editorials covered American machines, cycle tax, riding in France, motor cars, The Wheel Club and more. Members desirous of companions for journeys were invited to submit their details to the 'Prospective Tours' section.

'The Ladies Page' was introduced in 1890. Written first by Lillias Campbell Davidson and later by Fanny J Erskine, it covered buying a cycle, touring and cycling costumes.

Contributors included famed sportsmen and tourists such as A W Rumney and F T Bidlake. The first illustrated article appeared in 1891 and the quality and quantity of art increased during the craze, as did the advertisements. The CTC Gazette of the 1890s equalled, or bettered, commercial cycling magazines and was recognised as an authority on all things cycling related.

The largest item by far in the 1896 index was 'Correspondence', with more than 200 letters listed by subject. The gazette provided a forum for members to communicate with each other and share opinions about cycling matters. This was especially evident in 1898, when the correspondence pages buzzed in reaction to the CTC's offer of legal support to club member Lady Harberton, who had been refused service at the Hautboy Inn, Ockham, for wearing a knickerbocker cycling costume.

The CTC Gazette published dozens of letters on dress reform and the CTC's role in the losing case, with opinion split on both. The correspondence pages may not have led to a consensus on issues such as suitable dress, but they were a lively space for debate. 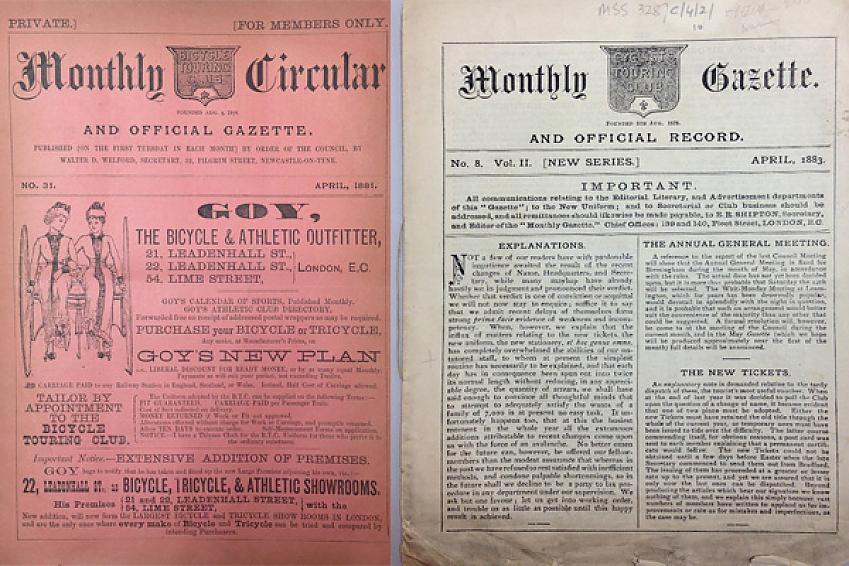 As the cycle craze waned and the turn of the century approached, change was once again afoot at the CTC Gazette. At the 1898 AGM, several members complained about the cost of producing the magazine and paying contributors, while others called for its 'tone' to be raised. George Bernard Shaw, playwright and CTC member, replied with a cutting retort ridiculing the "grumblers" in attendance.

J T Lightwood notes in his history of the CTC that in 1899 the magazine paid £500 for literary and other contributions, suggesting a healthy budget.

The gazette's first article on automobilism appeared in 1899, a topic Shipton, a motorist himself, felt could no longer be ignored. The name of the publication was abbreviated to Cyclists' Touring Club Gazette in 1899, coinciding with the club's 21st anniversary and peak membership at 60,449.

From its origins as a humble circular, the CTC Gazette had matured into a well-respected cycling title, running almost 600 well-illustrated pages annually. The next century would see further change at the magazine, as we will see in the next instalment of Cycling UK's history.

For now, however, the CTC could be content that it had led its club journal to success by tenaciously adapting to the changing landscape of cycling culture. 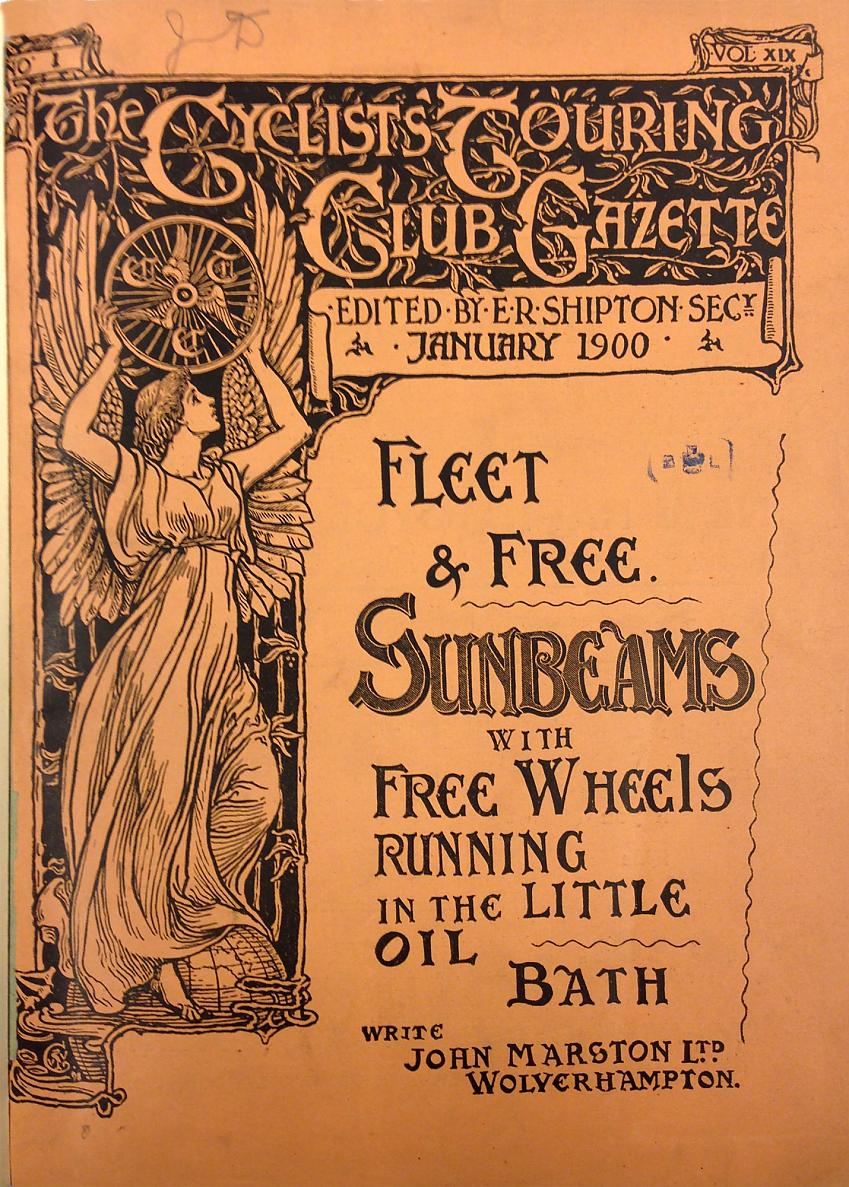 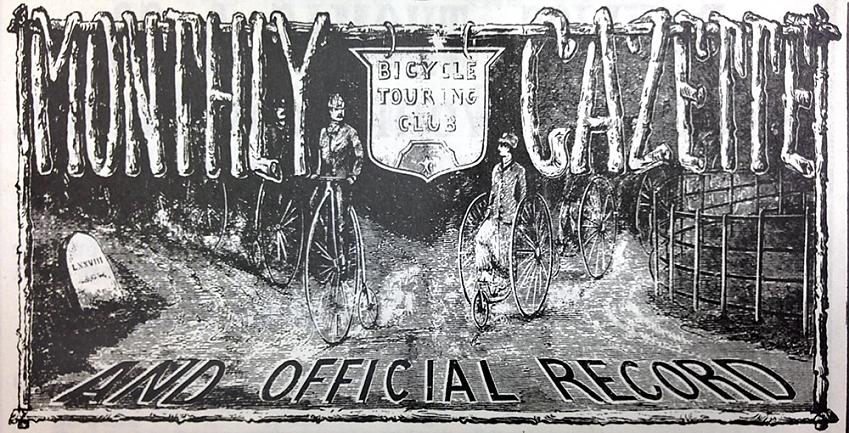 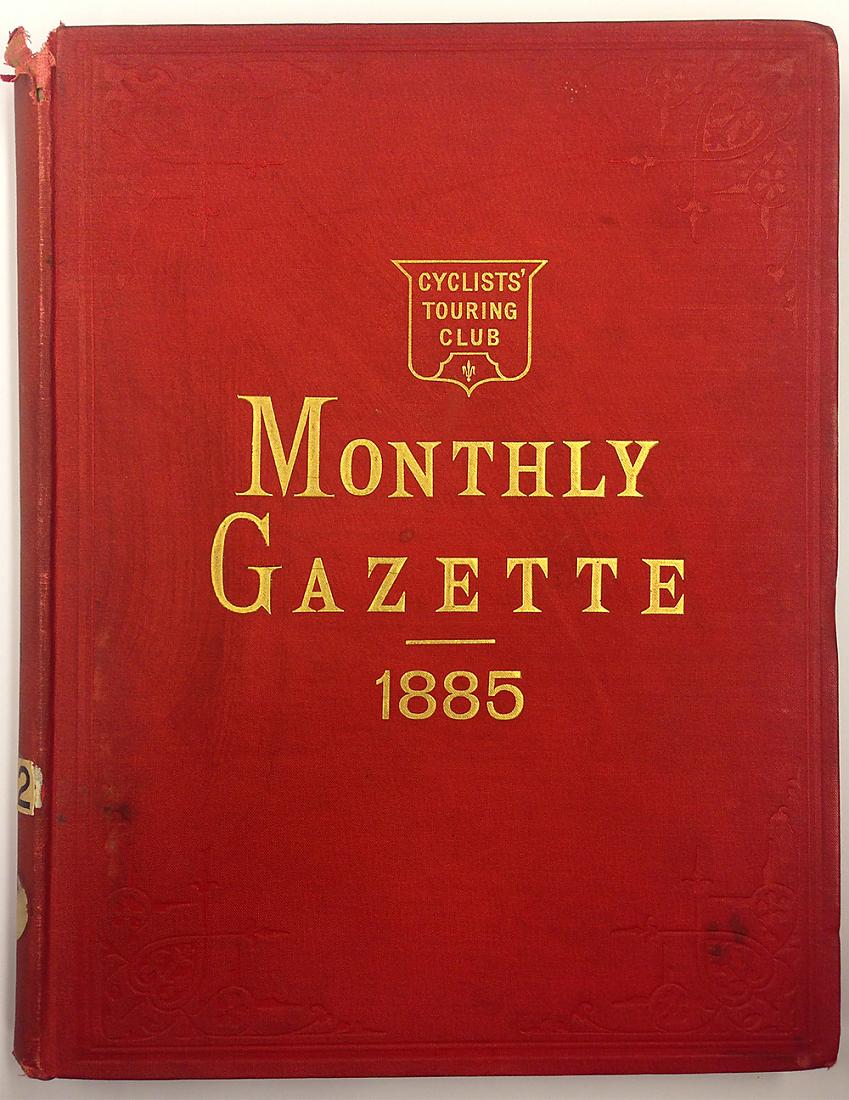 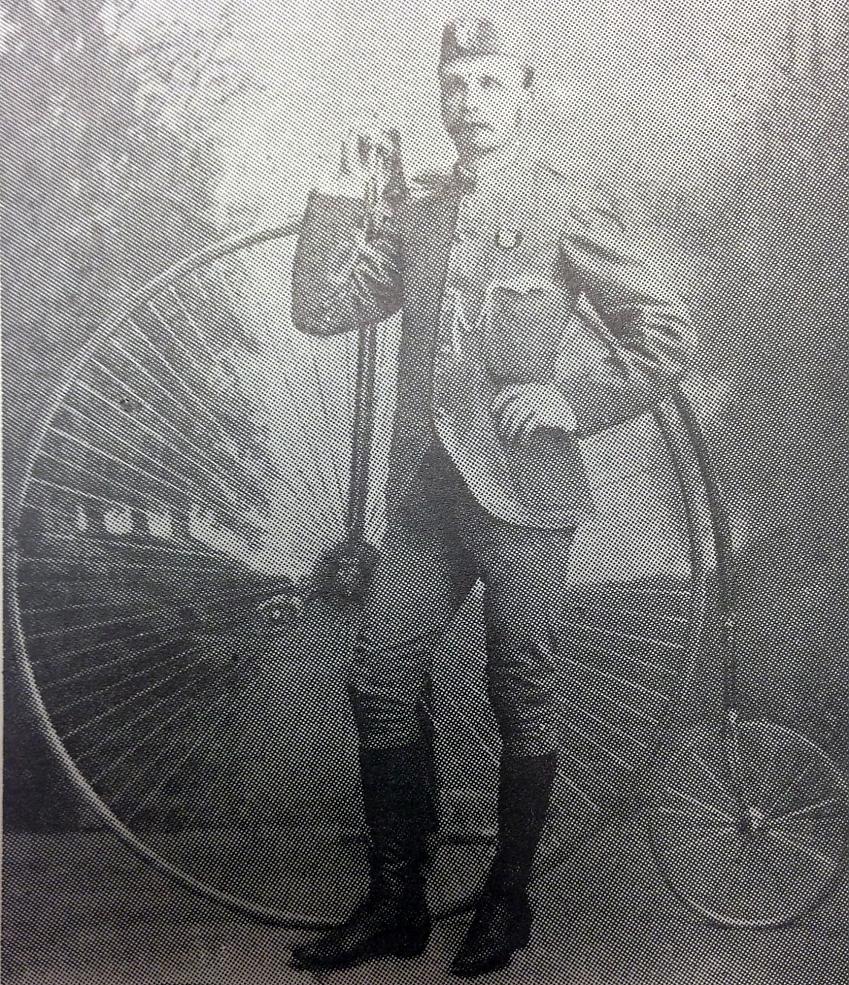 140 years of campaigning – the future from the past View