Charles and Will ride through the Pamir Mountains in Tajikstan
By mattlamy
Tuesday, 7 November 2017

Aged 19 and 18, Cycling UK members Charles Stevens and Will Hsu became the youngest cyclists to ride the 10,000km Silk Road from Beijing to Tehran.

Half a dozen Iranian soldiers fixed their gazes on us, AK47s pointed in our direction. We were at the border with Turkmenistan, wheeling our bikes. The commander met us with a long look and a single word: ‘Passport.’ Our photos were taken, as were our passports. We waited nervously. When the soldiers returned, the chilly atmosphere had thawed: they were smiling, machine guns hung unthreateningly over their shoulders. The commander beamed at us like an old friend: ‘Welcome to Iran.’

‘Welcome to Iran’, he said. And what a welcome. Silver trays bearing cold drinks and cakes were brought to us.

And it certainly was a welcome, after the austerity of our journey so far. Silver trays bearing cold drinks and cakes were brought out to us. Half an hour later, we were in a well-lit boardroom, air conditioning running at full blast to drive off the 40-degree heat. We were given fluorescent hi-vis vests for travelling on Iran’s roads by officials who apologised for any delay we might have experienced. They were gracious hosts, the first of many we were to meet in Iran.

Whilst Iran is an interesting destination in its own right, for us it constituted the final leg of a 10,000-kilometre journey along the Silk Road from Beijing to Tehran. It was our final country after pedalling through China, Mongolia, Russia, and the jigsaw puzzle of the five former Soviet Central Asian republics, in our aim to be the youngest pair to successfully cycle this historic route. By the time we arrived in Iran, on day 104 of the expedition, we were already seasoned by the adversities of a cycling route that is recognised as ‘the longest, hardest, hottest and coldest in the world’. Each country along the way brought challenges, but also great rewards. 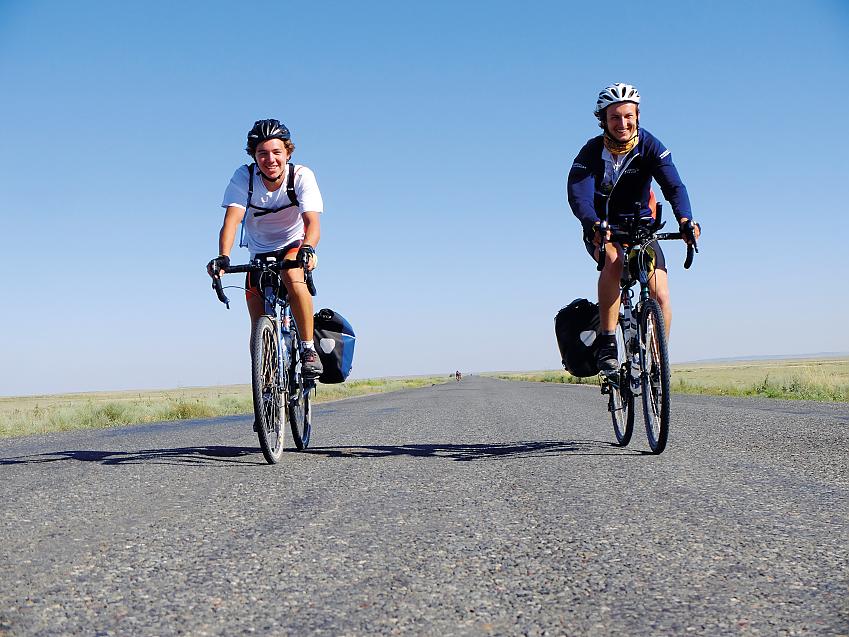 Will (left) and Charles ride through Kazakhstan

Mongolia is home to a nomadic way of life that’s slowly dying, as well as a landscape of severe but breathtaking beauty, all harsh angles and sweeping shadows. We endured a thousand kilometres of extremely poor off-road conditions; sandstorms in the Gobi Desert; and morning crusts of ice on our bikes, our tents, and sometimes ourselves.

Siberia’s Altai Republic conceals not only some of the most beautiful roads in all of Russia but also one of the largest open air art galleries in the world, containing thousands of examples of ancient rock painting and petroglyphs. Much to our surprise, the conditions in Russia were probably the most forgiving of any country.

We began to experience altitude sickness in Kyrgyzstan after the Tian Shan mountains broke the monotony of hundreds of kilometres of Central Asian steppe in Kazakhstan. Known as ‘the jewel of Central Asia’, Kyrgyzstan offered stunning views and wonderful cycling, but for us was an uphill battle. As Central Asia began to merge into the Middle East, we encountered a new problem along Tajikistan’s Pamir Highway. Somewhere along the way, in one mystery meat stew or another, the seeds of a storm had been planted: a case of the runs that followed us through the fabled Silk Road cities of Samarkand and Bukhara in Uzbekistan. After months of hard use, our bikes began to suffer too; ‘things fall apart’, indeed.

We were glad to escape the unwelcome attention of Turkmenistan’s political authoritarianism and its equally severe Karakum Desert. So it was that after four months of cycling from our start in China, we reached our final destination: the Islamic Republic of Iran. 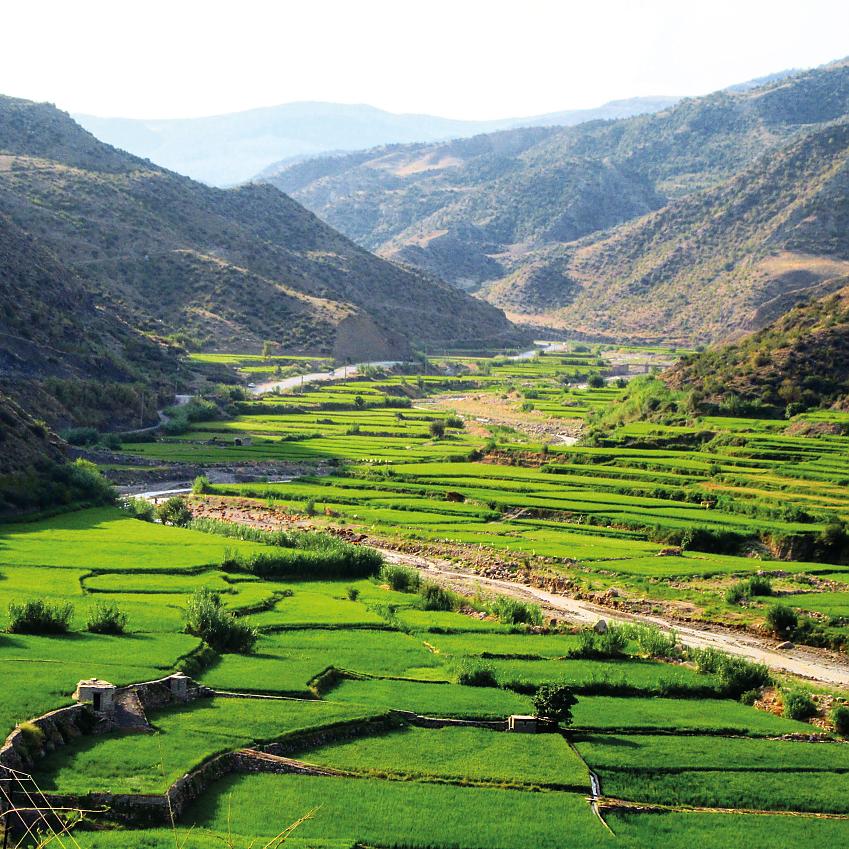 A tapestry with many strands

Iran brought its own challenges. Poor driving had been a consistent worry throughout the journey, but our closest dance with death came on the penultimate day, leaving the city of Semnan, a mere 200 kilometres from Tehran. After pedalling around a sharp bend on the smooth tarmac of a single carriageway, a muted thud sounded 20 metres behind us, marked by a billowing cloud of dust. A car had overturned.

We hurried back in time to see a dust-covered man emerge from his car. He was incredibly lucky not to be badly injured, suffering only from shock and minor bruising. Half a dozen Iranians were promptly on the scene to help tip the beleaguered car, with a groan from its suspension, back onto its deflated tyres. We were glad that the driver was okay but were conscious of the fact that, had he been travelling a fraction faster, we could have ended up underneath his car.

For much of our trip, there was little variation in the expansive landscape, only shallow climbs and descents in the Central Asian steppe, which was a sea of endless grass populated by countless birds and the occasional camel. This all changed in north-eastern Iran, where the lushness of Golestan National Park provided us with one of our most memorable days of cycling. Set aside by the Shah in 1961, Golestan National Park is home to leopards, brown bears, elk and even a rainforest. Our 1,400-metre descent snaked down a long valley through a cascade of lush greenery and humid air that thrummed with beating wings. We had left behind the dry heat of the steppe and entered a greenhouse, the air so full of moisture you could almost drink it. This sudden change in scenery and atmosphere was one of the unexpected delights of cycling in Iran.

We had left behind the dry heat of the steppe and entered a greenhouse, the air so moist you could almost drink it.

The Iranians we met were charming too. There was visible resistance to the political and religious orthodoxy imposed by the Grand Ayatollah and the Islamic jurists, particularly among the younger generations. This was most obvious during our night in the town of Quchan, 150km from Mashhad, Iran’s holiest city. As I was taking care of my bicycle chain, some loud but pleasant (and almost certainly inebriated) young men drove up beside me, smirking, and holding up the last of a mostly-drained bottle of homemade beer like a badge of honour.

As they drove away, taking their disregard for their country’s laws with them, I reflected that their nonchalant attitude was probably no bad thing. Just before heading to bed, I chatted with some Iranian university students and they asked me what I thought about their country. My responses seemed to satisfy them, and they proceeded to voice their frustrations about Iran. The conversation turned to the ways of acquiring alcohol, whereupon two unmarked men tapped them on the shoulders, telling them to leave and inquiring into my business in the country. The students shook hands with me with perceptible impatience and embarrassment. As they left, an attractive young woman passed by, the hem of her burka momentarily revealing a shiny pair of stiletto heels. I smiled at these small acts of civil disobedience, which seemed to mark an inexorable rise in more moderate attitudes, and settled down to sleep.

The level of hospitality we had encountered all along the Silk Road was astounding but Iran raised the bar. Being more urbanised, there were more opportunities to stop for ice-creams or cool drinks; luxuries not afforded to us in countries like Mongolia. We would enter the shops with trousers over our Lycra shorts and pick out refreshments. But when we tried to pay for them, the shop owners would refuse payment, putting their right hand to their chest in a symbol of benevolence. Only when we forced the matter, putting what we thought was an appropriate amount on the counter, the owner would dip his head and politely accept the exchange. Buying things in Iran felt less like a mere financial transaction and more like a ritual based on millennia-old customs. 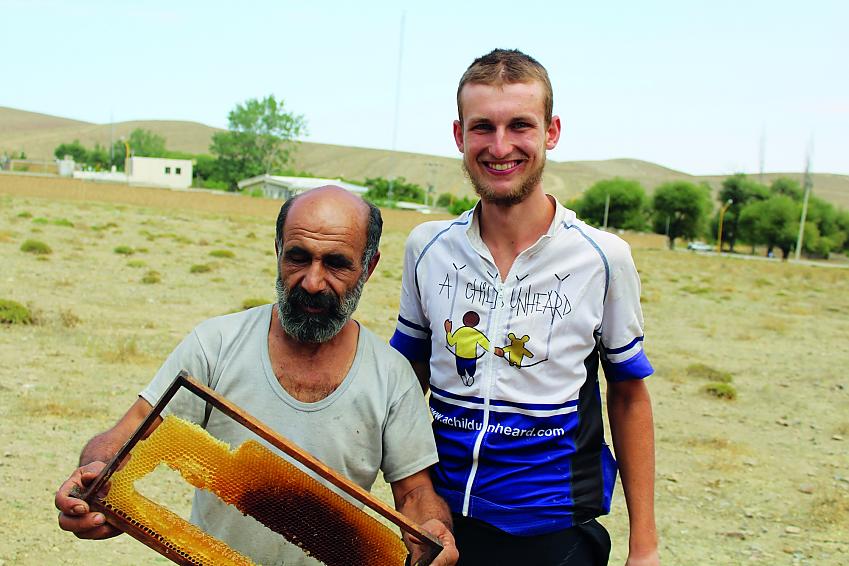 Free honey. Just one example of the hospitality in Iran.

On another occasion, when proceeding west of Gonbad, home of the Ziyarid Gonbad-e Qabus tower, Will was repairing a tyre holed by a piece of glass. The weather had taken a turn for the worse and driving rain had soaked us to the bone. Out of nowhere, a car pulled up and the driver offered us assistance. After we politely declined, he reached into a plain plastic bag and presented us with two warm loaves of seeded bread. They were delicious and really bolstered our spirits.

On the same day, heading down a hill en route to our camp at Damghan Lake, another car pulled up alongside us as we freewheeled at 40kph. The driver held one arm out of the window, offering a bag of green apples to Will. The driver’s face remained expressionless, his action apparently as automatic as that of the cashier at a drive-through. We thanked him, of course. Yet I believe this sense of generosity is so deeply ingrained in the Iranian psyche that it is almost subconscious.

I’ll remember these and many other casual acts of kindness for a long time.

The last leg to Tehran

The approach to Tehran, through an encircling gauntlet of tunnels and motorways, was perhaps the most dangerous section of the entire trip. It is a monolithic place: a sea of concrete stretching into hazy smog on the horizon and containing, in its wider metropolitan area, over 14 million residents. As we walked through one of the kilometre-long tunnels, which would have been impossible to cycle through, I fell over on one of the loose concrete slabs. My bike fell into the road, luckily into a brief gap in the traffic. As we continued down motorways, I felt like we were playing a prolonged game of ‘chicken’. 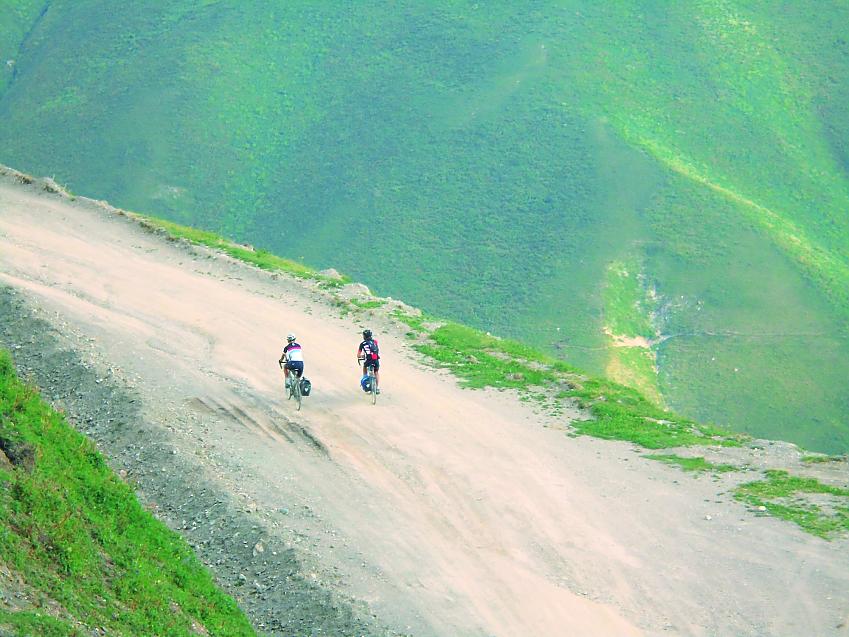 Our arrival in Tehran coincided with two events of international significance. One was the upgrading of diplomatic relations between the UK and Iran to full ambassadorial status. It was a great pleasure to be invited to meet the new British ambassador, Nicholas Hopton, upon our arrival at the magnificent British Embassy.

The second was the renewal of direct British Airways flights between London and Tehran, which should promote both trade and tourism in the country. I hope that such developments will lead to a new lease of life for Iran and its warm, welcoming and generous inhabitants.

Notwithstanding the trials we had in Tehran itself, Iran is a superb cycling destination. It was the most breathtaking part of our journey, and the most delightful country I’ve ever visited.

Conditions: Everything you can imagine

Accommodation: Mainly camping, some basic hotels and the occasional stay in someone’s home

I’m glad I had: Zip ties

Next time I would: Bring better overshoes and a small solar charger 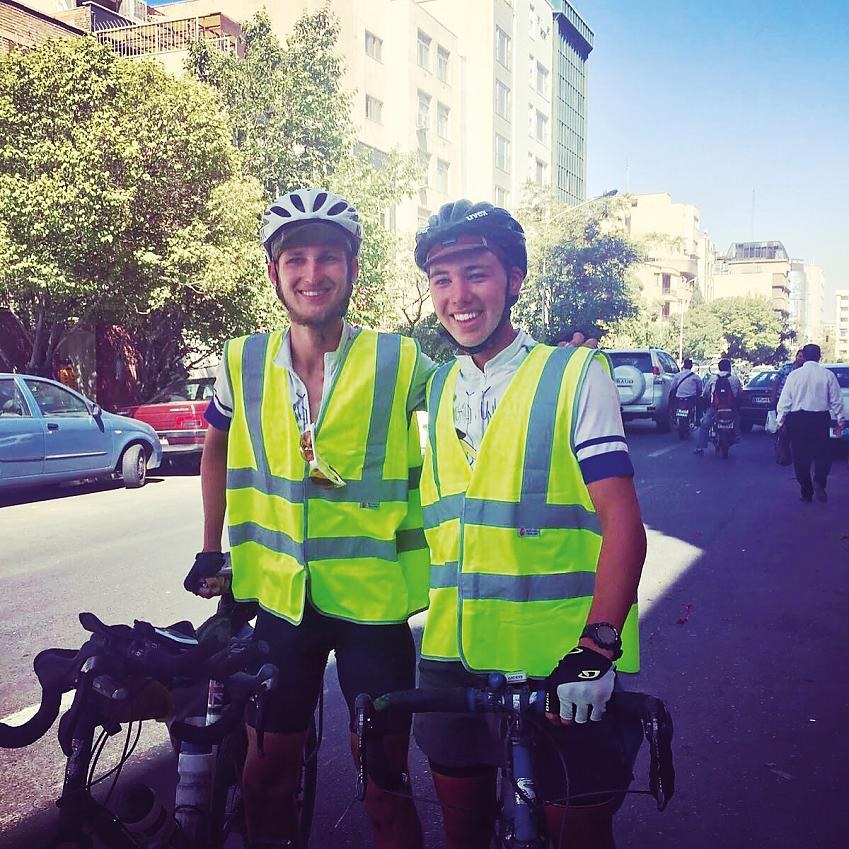 Above: Charles and Will arrive in Tehran

Be prepared. Leave plenty of time to get visas. We allowed three months and it was tight. Many of the roads are extremely rough, so make sure your bike’s tyres are tough enough and wide enough. You might even want suspension that can be locked out. Flights to Beijing are straightforward and regular, and it’s possible to fly to and from Tehran now as well.

Cycle Magazine, April / May 2017 View
Cycling UK continues to support the UK to cycle
This remains true during this difficult period with the ongoing threat of coronavirus Covid-19
Read our latest advice on cycling