The scenery of the Canadian Rockies was everything Cycling UK member Lewis Smith hoped for. The summer weather wasn't...

It’s the first of July in Alberta: Canada Day. Wearily cresting the Sunwapta Pass in the Rockies, I am greeted by a freezing headwind straight off the nearby icefields. The valley is filled at intervals by swirling clouds of hail and sleet. Last night’s forecast for Lake Louise was -2˚C – out of the wind, no doubt. Light snow in the mountains has refreshed the winter residues and given a Christmassy dusting to the pine trees. Summer here is short – and unpredictable even then.

We all have a mental picture of the Rocky Mountains. Who does not have a lingering desire to see them for real? An invitation from an old friend in Calgary was the catalyst for me. He dissuaded me from going sooner because of the cold, so I arrived at the start of the tourist season at the end of June.

Roads, especially metalled ones, are thin on the ground in this part of Canada. The main itinerary for tourists is from Canmore to Banff and Lake Louise, then on north-west along the Icefields Parkway towards Jasper. Canmore is the largest of these towns, Banff and Jasper major tourist resorts, Lake Louise a humming tourist village furnishing all essentials. Most touring cyclists in the Rockies are in transit as part of long-haul trips like Alaska to Mexico, or across Canada.

I concocted a realistic itinerary – too limited it transpired: Calgary up to the main icefields and back, with most possible side excursions. My friend marked the map with a long list of ‘must-sees’, a sort of tour homework I felt duty bound to accomplish. I didn’t get to ride the final leg down to Jasper, the Golden Triangle, or the Nordegg branch. I regret missing the last two. 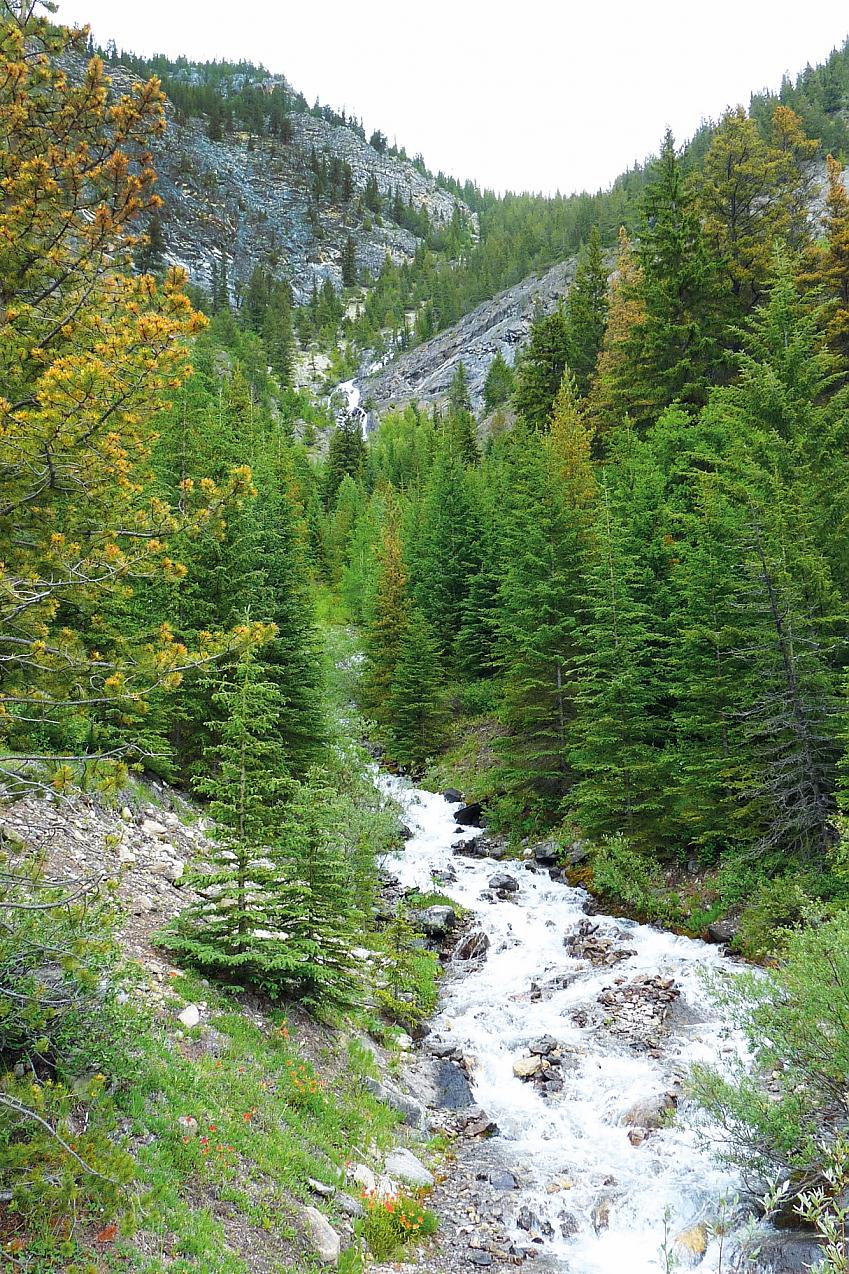 It is a full day’s ride from Calgary to the Rockies. The normal way for cyclists is the 1A road via Cochrane, but it is a big dual-carriageway up to there; I was given a Cadillac-assisted start that far. If the wind is favourable, the TransCanada Highway, effectively a motorway on which one can cycle the hard shoulder, is viable as far as Morley. It traverses exposed, rolling grassland with long hills.

Beyond Cochrane you pass the historic, isolated McDougall Church and traverse first prairie and then the stunted woodland of the unsigned Stoney Tribe Indian Reserve. You need to be aware of this, because the law is different. The village of Exshaw, where the mountains start, is the last outpost of the real world, so take advantage of the café.

It is hereabouts that you come across the famous Canadian-Pacific railway, which follows closely the magnificent Bow River. The long trains give equally long sonorous hoots. The mountains get bigger westwards.

You can avoid the TransCanada within the mountains to Lake Louise by using a mixture of: the parallel 1A road where it exists, east of Canmore and west of Banff; the local Harvie Heights road from Canmore to the National Park entrance; and a discrete cycle path (which was unsigned at the time) following the main road from there to beyond Banff. Only discovering the cycle path late in the day, I used the TransCanada outwards, the cycle path back.

At the National Park entrance beyond Canmore/Harvie Heights, a rude surprise awaits you: a toll booth, where the fee is $10 per day. You pay your dues at tourist offices; keep the tickets. Another rude surprise is the cost of the campsites: most charged $15-$25 per pitch, whether you are a solo cyclist or a group in a motorhome. A fortuitous night in the simple Youth Hostel at Mosquito Creek, scarcely dearer than the adjacent campsite, made me regret not having planned my tour around them. The relief warden, Alan, proved a mine of good information.

I normally prefer to camp wild, but saw little chance of doing so outside the National Park. Within it you are supposed not to, but I met cyclists who did, with due discretion and care. In any case, it it was not the rules that kept me site-bound…

Bears are common in the Rockies and taken seriously by the locals. This is not a place to be blasé - you must be bear-aware. I saw posted warnings and trail closures several times, mostly for grizzlies, once for black bears. Following an unfortunate incident, the Lake Louise campsite boasts an electric fence that would do a POW camp proud. Cougars are also potentially dangerous and are more common further south and west. 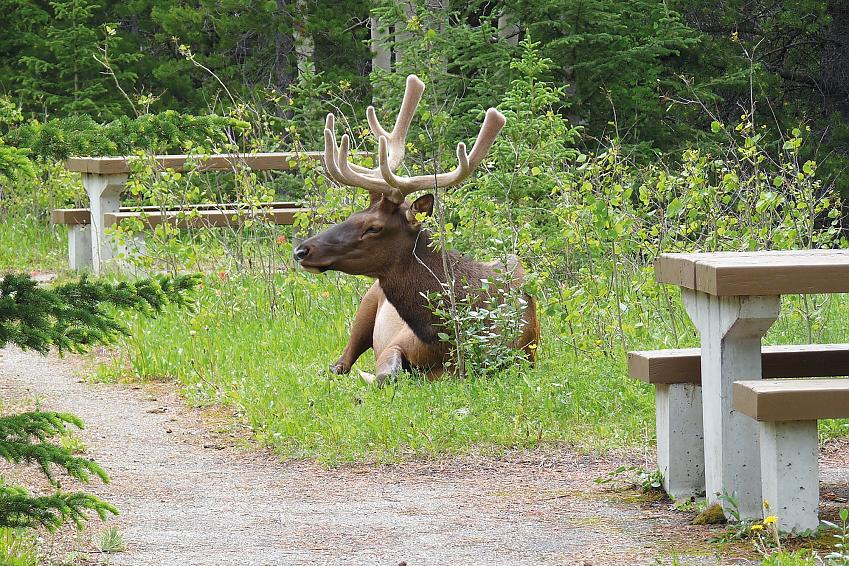 On my return leg, when I discovered the cycle path to Banff, a bear warning was posted at its entrance, but other cyclists were taking it so I did. A bear ahead on the road turned out to be a young grizzly. ‘Where is the mother?’ I thought. I waited for other cyclists going my way. When some turned up, they were locals – and they did not risk the bear. A pickup took us past the spot.

Beyond Banff, the Bow Valley Parkway (1A) takes you to Lake Louise. This is a pleasant, quiet ride, curving up and down through the eternal but lovely forest, with wildlife – bears included – and flowers in surprising quantity. Johnston Canyon campsite, alone of those I stayed at, offered a special rate for cyclists.

Big mountains tower all around, rearing neck-strainingly upwards, cloaked in a mantle of fir forest, often embracing lakes. I wonder whether a recumbent might not be the best way to appreciate these awe-inspiring crags. What makes them special is their extensiveness and great variety. One cold and overcast morning, the trees were lightly sprinkled with snow and the surrounding peaks wreathed in low cloud: fairy-tale mountains.

The weather was often cold and wet, finer on my return leg which enabled the mountains to be better appreciated. Some of the sights I visited were horribly crowded with motorists and coach parties, but I would not have missed them. Johnston Canyon is impressive in itself, a torrent thundering between its narrow walls, and also for the incredibly-engineered footwalk that overhangs it. The Weeping Wall is a huge cliff laced with small waterfalls. Peyto Lake is brilliant turqoise. From the Bow Summit northwards is a fine view of Tolkienesque mountains flanking the valley. The Columbia Icefield Centre, meanwhile, is the Mecca of the Banff-Jasper Icefield Parkway drag. You pass snouts of glaciers falling off the hidden icefield, shrouded in drifting cloud. Special coaches take tourists onto the icefield. 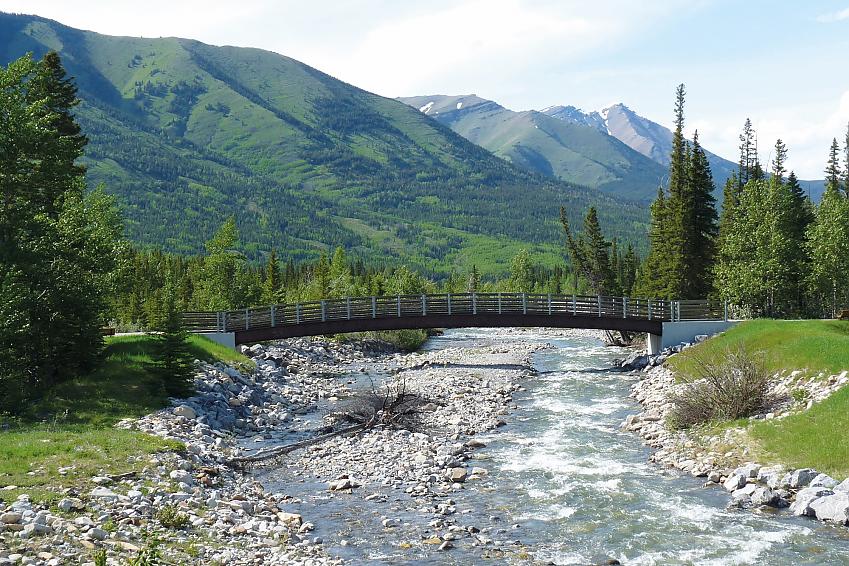 I didn’t always follow – or rather meet – the madding crowd. I sought out something special: the long-abandoned original road, which descends secretly from near the lake down to the TransCanada Kicking Horse Pass. Signed to ‘The Great Divide and Lake O’Hara parking’, it is barred to cars. I was utterly alone in the wild forest at last, fortunately with a good view ahead, for this is bear-heavy country. The Great Divide is marked by a large gantry, with a derelict information point and a pond with two outlets: one to the Pacific, the other inland. It was magic all the way on down to the main road. Thank you, relief hostel warden Alan.

For my return to Calgary, I diverted into Morley, a weird Indian village with bold communist-style architecture, listless inhabitants, and no facilities for travellers. From there, I ventured the TransCanada hard shoulder, a very exposed ride with long hills. With a tail wind, it would be fine; with a head wind, it was debilitating.

While I suffered a few unaccustomed setbacks, such as a dog attack at a campsite that required a hospital visit, it was a spectacular trip overall. The Rockies are something you will be glad you saw.

Where: Alberta and British Columbia, Canada

When to go: The season is short with rain always a risk. July and August are the surest but busiest months.

Distances: Calgary to Lake Louise is 180km. Lake Louise to Jasper is 233km. The Golden Triangle diversion adds about 285km. Time is what you make it: 70-100km per day is fine.

Accommodation: Hostels are scarcely more expensive than campsites and are more comfortable and convivial. See the entries for Alberta and British Columbia at the Hostelling International Canada website. Campsites are huge but are priced per pitch, which is expensive for solo cyclists; ask to share if possible. Facilities vary: cabin shelters, washrooms, thunder-hole or WC lavatories, anti-bear lockers.

Roads: The TransCanada Highway is effectively a motorway as far as Lake Louise and the Kicking Horse Pass. Cycling is allowed on the hard shoulder. Further west it is just the main road. The busy Icefields Parkway has a hard shoulder, often bumpy. Other roads cited are normal single carriageway.

Bike: Any standard touring bike with normal tyres will be fine.

I wish I had: Given myself more time and done the Golden Triangle and the Nordegg diversion.

Canadian Affair (canadianaffair.com) has flights to Calgary from Gatwick, Glasgow and Manchester. Air Transat charges £20 (CAD $30), each way on all destinations, for each transported bicycle. An oversized plastic bag is included in the fee and is available at the Air Transat check-in counter. Be ready to pay in cash. Greyhound coaches run a few times a day between Calgary and the Rockies and will take bagged bikes.