War graves are no less impactful a century on
By cliveandrews
Thursday, 15 December 2016

For the centenary of the Battle of the Somme, Paul Lloyd reflects on his tour of the Western Front.

Gazing at the uniform lines of pristine white headstones, it was a shock to see that many of the dead were only 19 years old. I found one soldier amongst the graves who shared my surname: Private FC Lloyd from the East Surrey Fusiliers, killed on 17 August 1918, mere months before the end of hostilities. I spent a few moments there in Beacon Cemetery, in between Corbie and Bray-Sur-Somme, thinking about who he was and how he might have died.

I’d put together a ride that visited some of the battlefields of the Western Front. In the ongoing centenary of the First World War, it felt appropriate. My plan was to start at the channel port of Dieppe, visit the Somme, the Ardennes, Mons, and Ypres, then head home via Dunkirk.

The riding wasn’t especially hard. The landscape is largely rolling countryside through France and it’s even flatter in southern Belgium. By following rivers and canals, much of what little undulation there was could be eliminated altogether. Not that I dislike hills but it felt right to follow natural boundaries that were a key part of the First World War conflict.

I was able to make good progress, clocking 100km a day - or more even - on a bike laden with camping equipment. Following the twists and turns of the long rivers and past the locks and bridges of the canals, I enjoyed a regular breeze from the water and had only geese and ducks as companions. 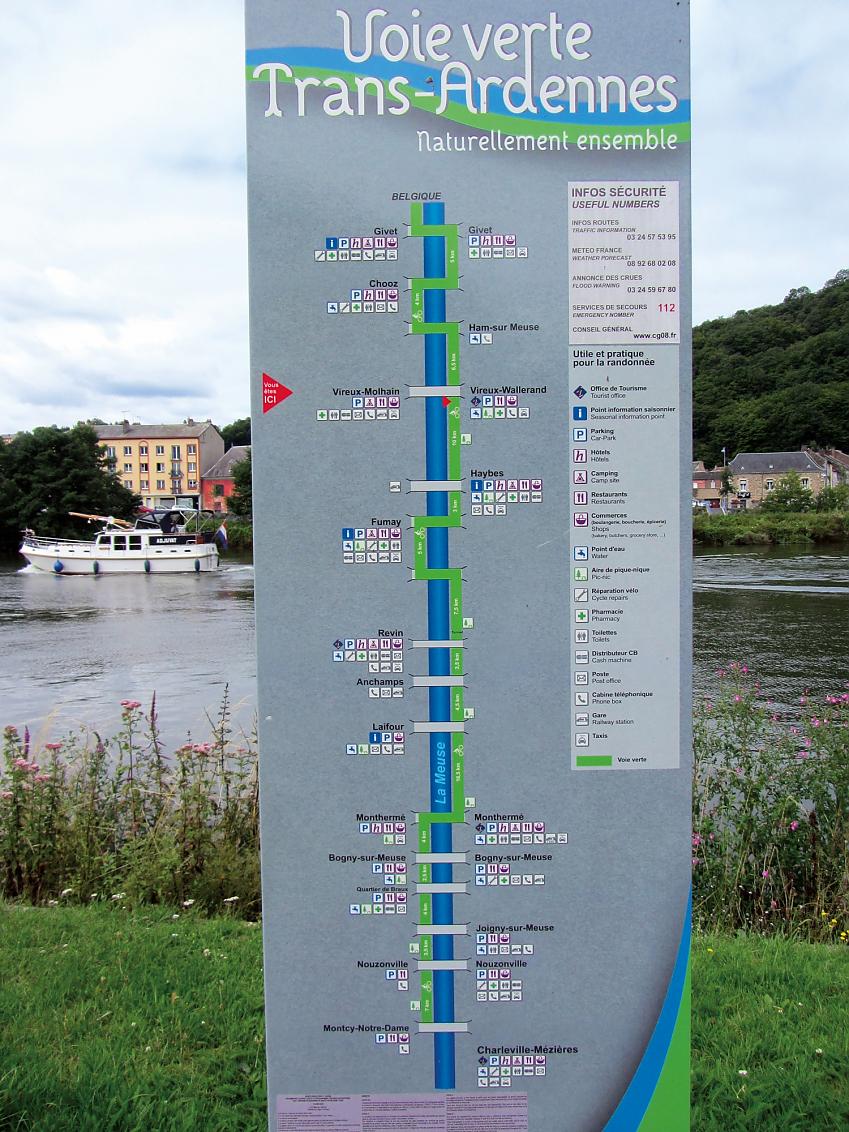 Following watercourses gives you a strange sense of disorientation, however. You seldom know exactly where you are. You don’t have the usual reference points of villages and towns, road numbers and junctions to follow and navigate by. Until the river or canal cuts through a town, you can’t pinpoint your position.

The Voie Verte Trans-Ardennes that I used is well sign-posted along the Meuse River up to Namur from Charleville-Mézières. The sweeping bends of the river through steep wooded hills made for delightful riding, unspoiled by passing traffic. Cycle routes on the Continent often take a similar tack. In Belgium, for example, much of the national network of cycle routes (Langeafstandsfietsroutes in Flanders and Veloroutes in Wallonia) follow river banks and towpaths. The canals in Belgium carry lots of freight, unlike those in the UK that are dominated by pleasure craft.

The cycle paths were surfaced either with tarmac or with stone slabs with pitch sealing along the joints. Riding the latter reminded me of riding on roads in England as a teenager in the 1960s – the bumpy kerblunk-kerblunk-kerblunk as your bike crosses the joints making touring-width tyres an asset.

Individual maps are available for each of the long-distance cycle routes in Belgium, and they’re a real help when you’re down by the waterside. There were a couple of times I overshot a turning or missed a section of the route where the path transfers over to the other bank of the river or canal, leaving me puzzled about where I was and how to get back on track. I found I needed road maps as well to navigate successfully. 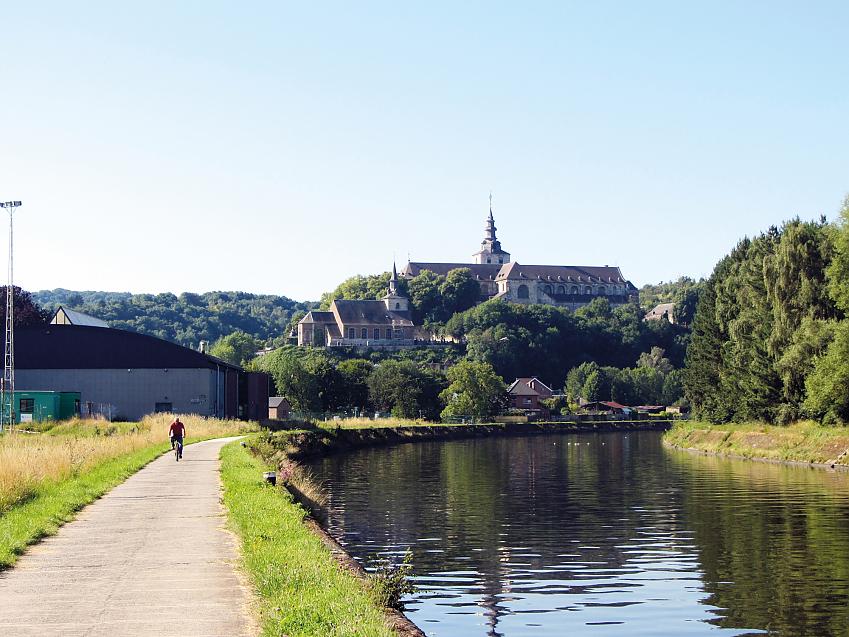 A couple of times, I was rescued by friendly Belgian cyclists. Thierry rode with me for an hour in the approach to Charleroi to help pilot me through one stretch where there was a deviation in the route away from the canal. A female cyclist whose name I didn’t catch gave me a cycle route guidebook of the Ravel 1 route out of Charleroi and on to Mons and Tournai.

The prime purpose of my trip was to visit some points along what was the Western Front in World War One. The route upriver along the Somme takes you through many towns and villages that were significantly affected by the fighting. Many, like Amiens and Albert, were almost totally destroyed, having been fought over several times as the front line moved backwards and forwards.

A century has drawn a veil over the damage. I was sometimes struck by the difficulty of reconciling the pock-marked, lunar landscape of the First World War battlefields in the photographs and film footage in the museums I visited with the verdant countryside I was cycling through. Yet every year, on some of the key battlefields of the Western Front, they still unearth thousands of tons of remains – machines, equipment, munitions and sometimes bodies. So much blood was spilt and so many lives were lost in this landscape.

The most poignant reminders of all of the suffering and death are the memorials and cemeteries. A conscious decision was made not to repatriate the bodies of the large numbers of fallen British and Commonwealth soldiers but to dedicate collective cemeteries where they fought  and fell.

Consequently, all the villages I cycled through in the Somme had their cemetery right in the village. Often these contained hundreds if not thousands of war dead. Walking along the lines of gravestones, looking at the names, the regiments, the home towns, and sometimes the ages, brought a sense of what the war meant in human terms. On many of the gravestones, there was an anonymous epitaph: no name, just ‘A Soldier of the Great War’. 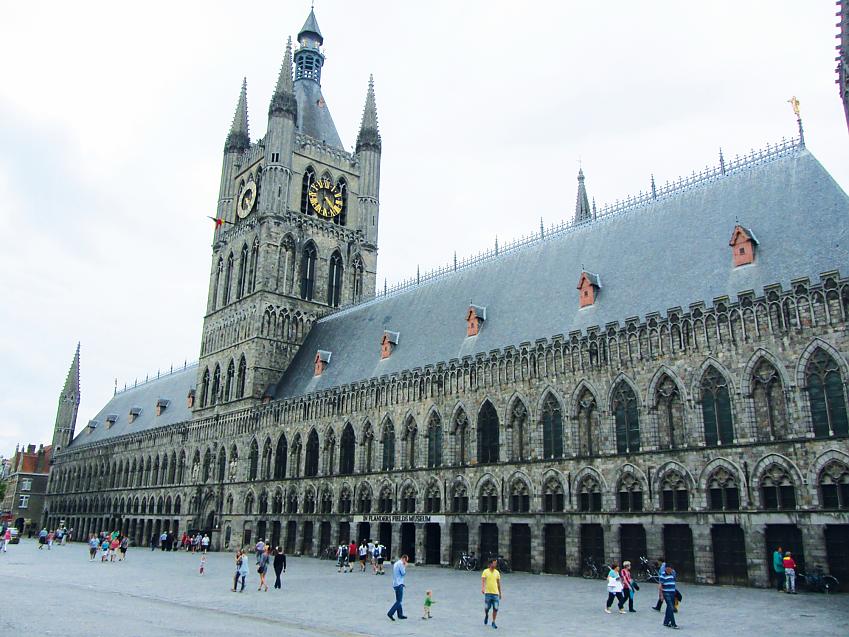 I visited some excellent museums along the way to learn more about what the 1914-1918 war was like, both for those fighting and for civilians.

The two museums that I found most informative were the Historial de la Grande Guerre in Péronne and the Memorial Museum Passchendaele 1917. Both of them had comprehensive displays of arms and equipment, artefacts, materials, uniforms, dioramas and reconstructions of trenches.

They also had artistic interpretations of the Great War. The ink drawings and lithographs of German artist Otto Dix in the Péronne exhibition made a powerful, lasting impression on me. During the war, photographs of the most brutal images had to be censored to avoid causing alarm. But somehow the artistic recreation of those memories conveys the full horror of war. (Of course, we don’t need to look very far to see similar images of the horror of war in our own time – just turn on the television news.)

Cycling through this landscape and between the locations where it all happened gave me a lot of time alone in the saddle to imagine what it must have been like for those involved, especially those that didn’t return. The trip gave me a deeper understanding of the context and the impact of the First World War.

On Armistice Days to come, I won’t just be silent for two minutes – I’ll stop what I’m doing and think back to my ride and to those lines and lines of headstones.

Decide what you want to include in your trip around the battlefields: there is no shortage of locations to visit across the whole Western Front. Cycling between them (or other locations) is enjoyable in these quiet corners of France and Belgium.

The obvious start and finish points are the Channel ports. However, you could skip the transitional legs from the Channel and use Eurostar and local trains to get to eastern Belgium, then start from there. Or you could fly to Brussels/Charleroi, Strasbourg or Luxembourg. See ryanair.com and easyjet.com for details.