200 years ago in Germany Baron Karl von Drais demonstrated his newest invention: the 'draisienne' (which was also known as the 'laufmachine', 'running machine' or 'Vélocipède'), a two-wheeled horseless vehicle propelled by its rider. Cycling UK's Historian Sheila Hanlon explains why without Baron Karl von Drais we would not have the modern bicycle.

On 12 June 1817, a crowd gathered along the best road in Mannheim, Germany to watch Baron Karl von Drais demonstrate his newest invention: the 'draisienne', a two-wheeled horseless vehicle propelled by its rider. Drais climbed on and set out for the Schwetzinger switch house, a strategic point along the postal route. Less than an hour later, he was back, having completed the 8-9 mile round trip in a quarter of the usual time. Two hundred years later, we salute Drais and his draisienne as a significant milestone on the long road of innovation leading to the bicycle of today.

​Karl Freidrich Christian Ludwig Freiherr Drais von Sauerbronn (29 April 1785 - 10 December 1851), was born in Karlesruh, Baden, to a family of influential civil servants with minor royal connections. His mother was Baroness von Kaltenthal, his father served as a judge, and his godfather was the Grand Duke of Baden Karl Freidrich.

At a young age Drais took an interest in science and mathematics, studying forestry at his uncle’s private school before specialising in Mathematics, Physics, and Architecture at the University of Heidelberg. Through government connections, Drais’s father secured him a position as Forestry Master without a district in 1808, with paid leave to develop his inventions.

Drais was a prolific inventor. He devised a piano music recording system, binary algorithm for calculating square roots, periscope, typewriter, and a form of 'secret writing'. His main area of interest, however, was horseless travel.

Drais’s biographer Hans-Erhard Lessing hypothesises that this focus was a reaction to political and environmental crises. Europe suffered poor harvests from 1812-15, war caused 20 years of disruption, Napoleonic soldiers raided granaries while retreating from Moscow, and grain prices soared. To make things worse, as Mick Hamer argues in 'Brimstone and Bicycles', on 5 April 1815 Mount Tambora in South East Asia erupted in one of the largest volcanic explosions ever recorded, producing an ash cloud that cooled temperatures by 3⁰C on average in Europe and North America. 1816 became known as the year without a summer. Crops failed, the Thames froze over, it snowed in July, food became unaffordable, starvation set in, and horses died or were eaten. In England, the dreary atmosphere inspired Mary Shelley to write Frankenstein; in Germany it led Karl von Drais to develop an early bicycle. 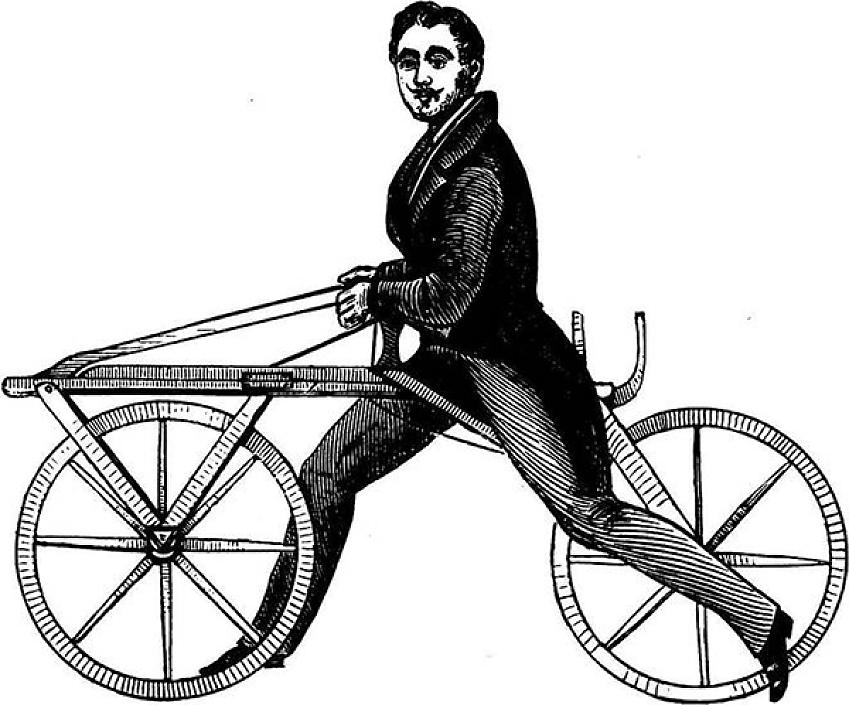 The first manumotive vehicle designed by Drais was a four-wheeled passenger carriage driven by a servant in the rear seat who used foot planks to crank its axle. By 1817, Drais had moved on to two-wheeled machines, possibly inspired by the 'célérifère', an adult hobby horse popular in 1790s France.

Drais’s 'laufmaschine', which translates to 'running machine', known as a 'draisine' in English and 'draisienne' in French, consisted of two miniature carriage wheels attached in alignment to a wooden frame. It had a triangular steering column with an armrest fitted over the pivoting front wheel and a padded saddle.

To propel the machine, the rider ran his feet along the ground, coasting between strides as the machine gained velocity, reaching speeds of 5-6 miles per hour. To brake, the rider pulled a cord that stopped the back wheel. Drais envisioned practical applications for his machine, such as postal, forestry, or military transportation.

The press buzzed with reports of Drais’s invention. Saunders’ Newsletter, in its 25 Sept 1817 issue, provided a detailed description of the “new-invented travelling machine”, explaining: "The leading principle of the invention is taken from the art of skating, and consists of a simple idea, of impelling by the help of the feet a seat on wheels.

"The machine that the inventor has made consists of a seat on only two, two-feet wheels running one behind the other, that it may be used in the footpaths. To preserve the equilibrium, the traveller has before him a little board with a cushion nailed to it, on which he rests his arms, and before which is the small pole which he holds in his hand to steer his course with. The machine weighed 50lb and a sturdy model could be produced at a cost of under four Carolines".

In October 1817, Drais published a 3-page brochure of laufmaschine designs. It included two illustrations, one in colour featuring a rider in a yellow military courier uniform. Models with 2-4 wheels and a tandem were included. Customers could invest in a ready-made machine or order the design and engage a cartwright to construct it. Official models were authenticated with a number plate embossed with the von Drais coat of arms. The following year Drais published a French brochure with the name of his machine translated to “vélocipède,” and including accessories such as an umbrella, sail, and lamp. 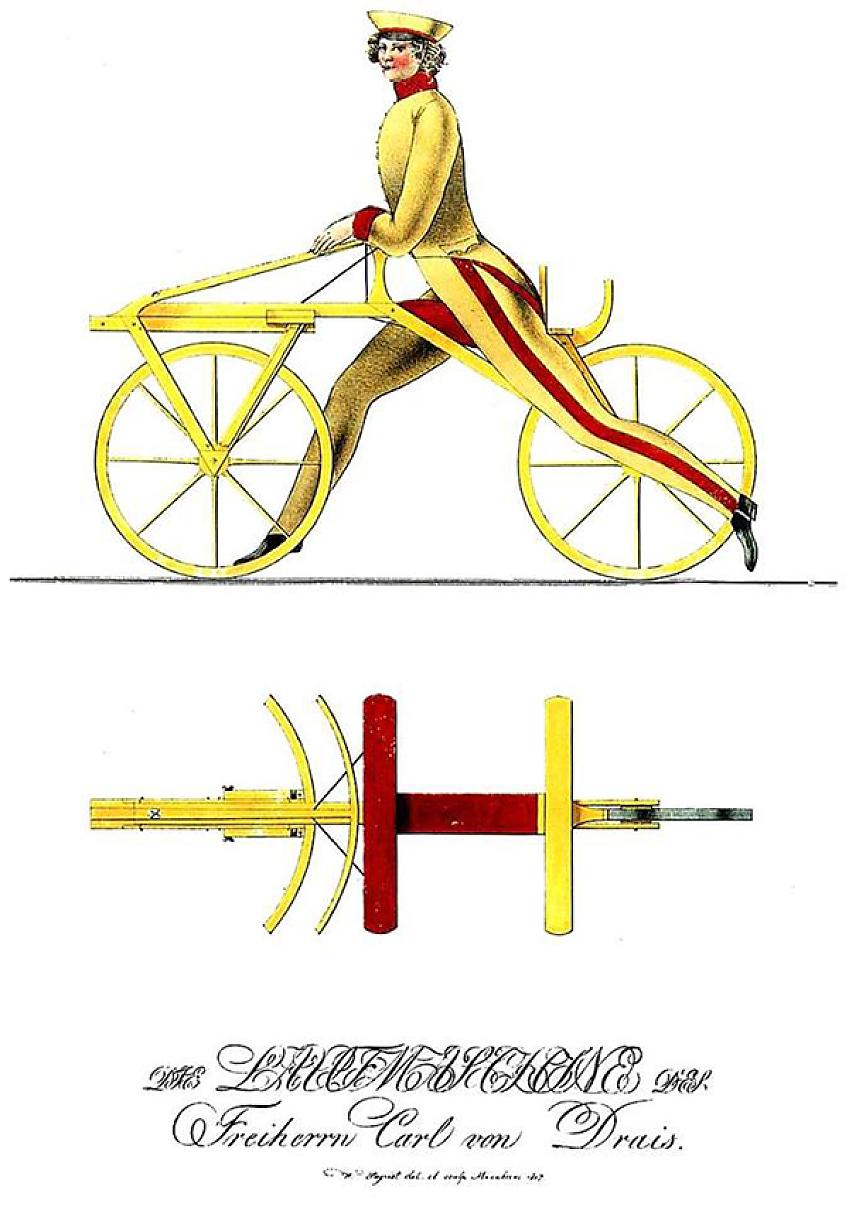 Drais followed his record-setting Mannheim to Schwetzinger trial run with a second 1817 journey from Gernsbach to Baden over a notoriously steep 800ft hill. Lessing writes that a local policeman clocked von Drais in at 4:00, having completed the trip in one hour at an average of 4 miles per hour, halving the usual travel time and impressing the amateur scientists in attendance.

A more spectacular show of the machine was, however, needed if Drais was to attract a commercial market. In April 1818, Drais organised a draisienne demonstration in Paris’s Luxembourg Gardens hosted by his chasseur (footman), who served as his agent in France. Thousands of spectators paid admission for a glimpse of the machine. Illustrations of the event show women in fancy gowns, well-dressed men, and children lining the park’s paths as draisiennes scoot by.

News of the demonstration reached far and wide. The Morning Chronicle for 10 April 1818 commented in its 'Paris Papers' section that:

"An immense concourse of spectators assembled yesterday at noon at Luxemburg [sic], to witness the experiments with Draisiennes (a species of carriage moved by machinery without horses). The crowd was so great that the experiments were but imperfectly made. The machine, however went quicker than a man at full speed and the conductors did not appear fatigued."

Remarkably, a tandem designed for a female passenger was displayed. The Morning Chronicle continues, “About three a Lady appeared in a Draisienne, conducted by the Chasseur of the Baron de Drais.”

The reception to Drais’s new machine was mixed. The Liverpool Mercury, 24 April 1818, optimistically noted that, “Draisiennes appear to be convenient for the country and for short journeys on most roads.” Journal de Paris, however, was unimpressed, reporting that one rider fell and put his draisienne out of action by breaking a bolt, and that the machine was slower than a band of children. Comparisons to children’s hobby horses were impossible to shake, making people flippant about the draisienne as an adult technology.

The draisienne was a target for satire. Historian David Herlihy writes that a contemporary damningly claimed, “Mr Drais deserves the gratitude of cobblers, for he has found an optimal way to wear out shoes.” Fellow cycle historian Andrew Ritchie has uncovered jokes about “Velocipedraniavaporiana” and a patent for a machine going “14 miles in 15 days".

Curiosity prevailed and draisiennes proved popular for park riding in the summer of 1818. Drais’s chasseur ran a rental business out of Monceau Park in Paris, and overall sales were good. Riding rinks opened as far away as Austria. The draisienne craze was, however, short lived. Rutted, uneven roads made riding unpleasant and taxing. When riders retreated to footpaths, they were deemed a nuisance to pedestrians. Some cities banned draisiennes, including Milan in 1818, London and New York in 1819, and Calcutta in 1920.

Drais had hit upon an invention with tremendous potential. His civil servant status as a forester and the regional limits of patents, however, made it difficult for Drais to protect his design. On 12 January 1818, Drais received a patent in Baden, but it was not valid beyond the region. Later that year Drais secured a five-year patent in France, but it did little to discourage knock-offs. Pirated draisiennes appeared throughout Europe.

In England, Denis Johnson, coachmaker of No. 75 Longacre in London, made the most of Drais’s design by appropriating it. There is no doubt that Johnson’s velocipede was based on the draisienne. The Yorkshire Gazette, 15 May 1819, for example wrote that, “Baron von Drais…is the inventor of this ingenious machine…now introduced to this county by Mr Johnson.” Johnson likely saw models and designs brought over from Europe, and swiftly patented it in England before anyone else got the same idea. 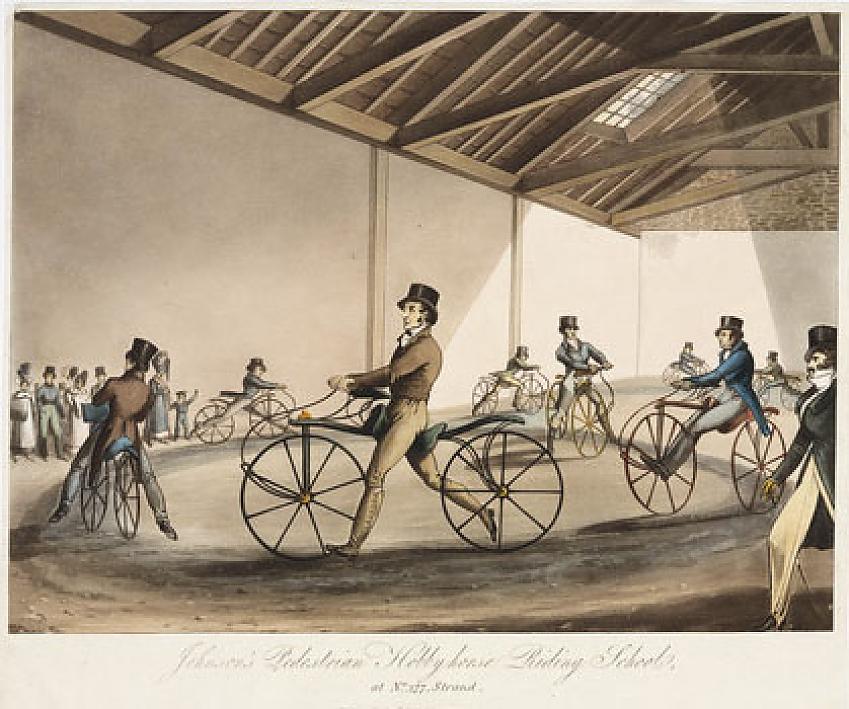 Johnson’s 'pedestrian curricle', patent #4321 dated 22 December 1818, was an improved draisienne. It was lighter, substituted metal for wood where possible, had larger more stable wooden wheels lined with iron, featured a crossbar dipped in the middle where the saddle sat, was more upright, and had a metal steering column. It could travel 9-10 miles per hour, making it one of the fastest vehicles on the road. Johnson introduced a ladies drop frame and a deluxe model hand painted to order.

A riding school opened near his Long Acre shop, and races were organised. The 'dandy horse' or 'hobby' as it became known was popular with young urban gentlemen, and even more popular with satirists. 'The Hobby-Horse Dealer', an 1819 print held in the British Museum (below), which compares buying a velocipede to assessing a horse, illustrates this vein of humour.

Drais’s original draisienne may have been a passing fad, but his design inspired further innovation, copycats included, with lasting influence. 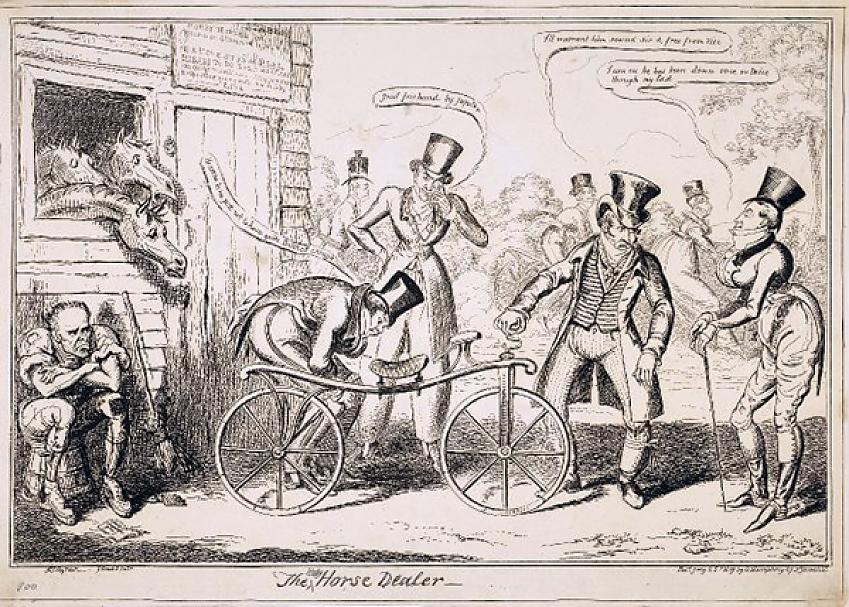 Drais did not lead an easy life. His mother died when he was 14, his forestry career relied on his father’s influence, and his meagre income rendered him unmarriageable. Drais had difficulty patenting his draisienne and failed to find commercial success. The von Drais family, who had already once fled the advancing French revolutionary army, had their reputation ruined in 1819 when Drais Senior, a high ranking judge, refused to pardon a student accused of murdering an anti-revolutionary playwright. Karl von Drais moved to Brazil to escape persecution, returning in 1827 when his father, an epileptic, became ill. His father died in 1830, at which point Lessing writes, “the bachelor became an alcoholic".

During the German Revolutions, 1848-9, Drais forfeited his title as Baron, becoming “Citizen Karl Drais.” Later, when Prussians forces reclaimed the region, revolutionary sympathisers were executed or committed to asylums, a fate Drais escaped only through the lobbying of his sister and cousin. Drais lived out his remaining years quietly and impoverished, having had his assets seized and reputation ruined in the aftermath of the failed revolution. He died penniless aged 66 on 10 December 1851. Drais’s inventions, his biographers reveal on www.karldrais.de, were forgotten or belittled by Baderian authorities keen on discrediting their political enemies.

Drais’s reputation was not restored until the Victorian cycling age. A commemorative plaque was installed on his house in Karlsruhe and German cyclists saw that his grave was protected. The Graphic, 4 May 1891 reported that “British Cyclists, who owe so much health and enjoyment to their machines, may like to hear of the honours just paid to the inventor of the bicycle, Baron Carl von Drais. [sic]…the Baron’s remains have been moved with much pomp from their neglected grave to a resting place in the new cemetery, where the bicyclists of the fatherland will erect a handsome monument.”

A fitting memorial to Drais has since been erected in Karlsruhe cemetery. Postage stamps, a Google Doodle and a 2017 German €20 coin have also been released in his honour, 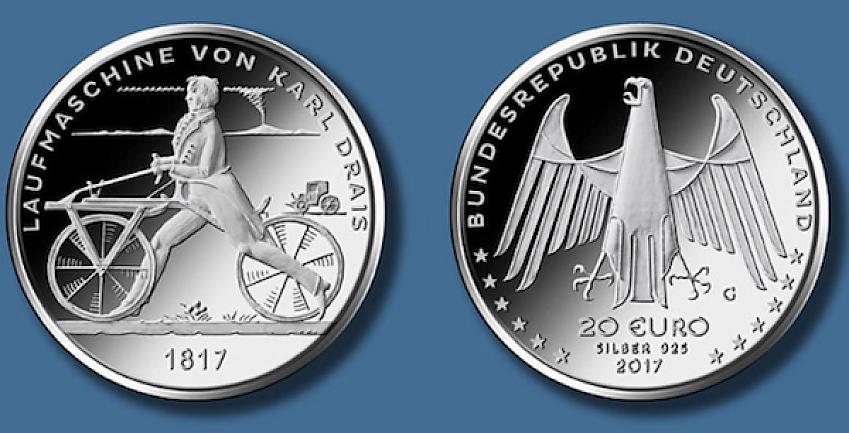 The draisienne may not have been a pedal bike like we think of today, but it represented an integral stage in cycling design. Two centuries after the draisienne first came to prominence, it is fair to look back at the legacy of Karl Von Drais and declare him the father of the bicycle.

Dr. Sheila Hanlon is Cycling UK's historian. She will be exploring our rich cycling past and present in an ongoing series on the history section of Cycling UK's website.