One solution to the danger that LGVs present to cyclists is to separate them from each other, for instance, by constructing segregated cycle paths. This, however, would require many miles of segregated cycle paths to be constructed in areas where the two road users most commonly share the road: densely populated inner-city roads, which often lack available space. This solution is unlikely to be implemented in the short term, and highly unlikely to be implemented everywhere it needs to be.

Another possible solution that Cycling UK has advocated would be to create distribution centres on the urban periphery, where large vehicles would off-load onto smaller vehicles or even cargo bikes. The downside to this is that it would likely result in an increase in congestion, pollution and possibly even risk to cyclists as more but smaller vehicles take to the road. Other solutions to reduce the danger are needed. 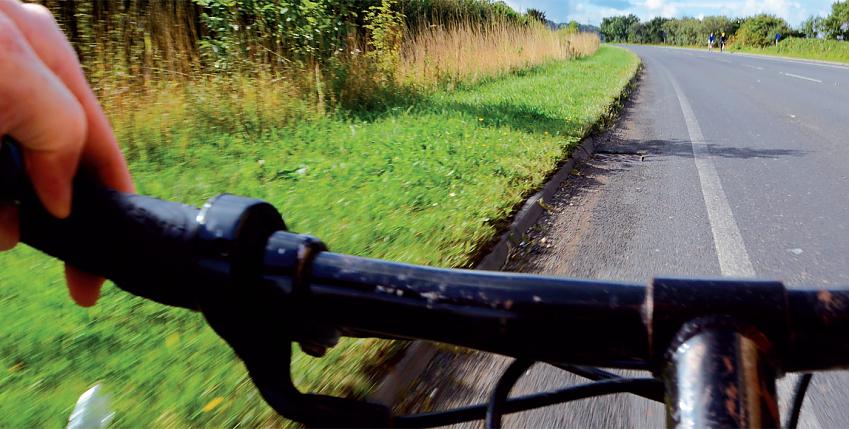 In the absence of robust regulation to raise the on-road safety standards of the construction and haulage industries, certain companies have taken measures to improve the safety of their vehicles and drivers in the short term. Coalitions of organisations have sprung up to create voluntary codes of conduct outlining minimum safety standards.

Credit is due to the companies and organisations trying to reduce work-related road risk, especially since measures have been taken by the government that might actually increase the danger of LGVs – for example, increasing the speed limit of LGVs on rural roads from 40mph to 50mph and sanctioning trials of mega-trucks. Cycling UK campaigned against the introduction of mega-trucks to the UK because of the increased risk of injury to cyclists and other road users due to the wide tail swing when manoeuvring.

All is not lost, however. Efforts are being made to introduce legal minimum safety standards. Earlier this year, the European Parliament voted in favour of introducing safer lorry designs, including side guards, lowered cabs, larger windscreens and side windows. But due to lobbying from truck manufacturing companies, the introduction of the regulations has been delayed for eight years.

Until binding regulations come into effect, it is important that the industry acts to reduce the dangers of LGVs. There are various means for achieving this, from better training of drivers, to in-cab technologies, to improved vehicle design. I interviewed several lorry drivers, some of them Cycling UK members, to get their views on the safety devices and measures being tested by the industry, and to hear their opinions on the implications of these devices for cyclists’ safety. 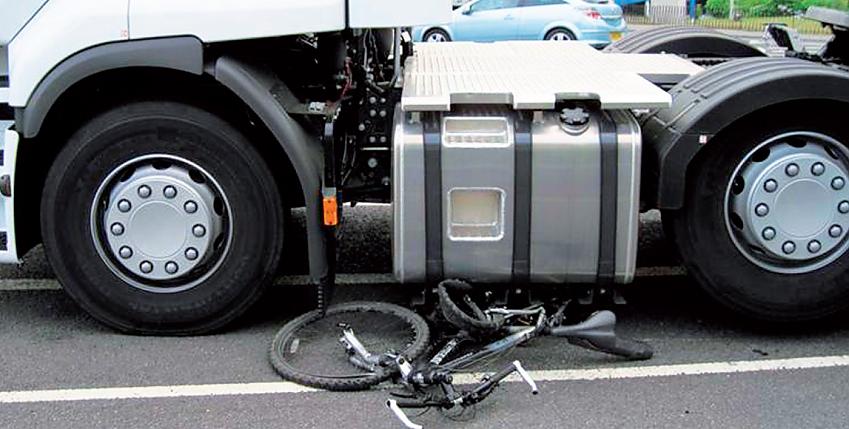 The drivers thought the biggest risk to cyclists of sharing the roads with large vehicles was the risk of ‘not being seen by the driver’, but they differed as to the reason why this might happen. Cyclists getting too close to trucks ‘without understanding the space requirements and visibility limitations’ and ‘cyclists coming up on the nearside’ were suggested as possible reasons, and ‘the driver not looking properly’ and ‘truck drivers not paying enough attention in general’ were also suggested.

An LGV that complies with current UK legislation still has huge blind spots. Many of the safety technologies proposed aim to eliminate them."

Blind spots are areas around a vehicle that cannot be seen from the cab, even in the mirrors. An LGV that complies with current UK legislation still has huge blind spots. Many of the safety technologies proposed for LGVs aim to eliminate them.

These are some of the existing measures to improve lorry-cyclist safety. I was curious to see what the lorry drivers thought of them.

Exchanging Places. These are events run by the police, with the assistance of haulage companies, in which cyclists are invited to sit in a lorry cab to get a driver’s view of the road. The drivers had mixed views on their effectiveness. The events were seen by one driver as simply a means to ‘promote the idea of blind spots’, which he argued are ‘a myth to excuse bad driving.’ He felt the events ‘either terrify cyclists or anger them’ and pointed out that the behaviour that is encouraged (i.e. to position oneself far enough ahead of the lorry cab to be seen) ‘is countered by common cycling infrastructure like Advanced Stop Lines’. Others felt they ‘work well for parents of younger children’ and ‘could be taken a step further by inviting cyclists to spend a day in the cab.’

One lorry driver felt that ‘cycle awareness training is the most effective tool in the box’. Others were more cautious, fearing the cost to small firms."

Cycle training for drivers. One driver felt that ‘cycle awareness training is the most effective tool in the box’, whereas others were slightly more cautious, fearing that the cost to small companies of providing training would be prohibitive and less fit drivers would be unable to take part. A suggestion was made that cycle training should be included in the training drivers must undergo every five years in order to obtain their Certificate of Professional Competence (CPC). Cyclist and lorry driver Clive Matthews said: ‘I find it hard to imagine an HGV driver with experience as a cyclist not being more aware of cyclists. I have witnessed the changed attitudes and greater understanding this training produces. To my mind it is a no-brainer, drivers and companies already have to pay for training, why not have some which will save lives.’

Extended view mirrors. The current requirements for mirrors were seen by the drivers to be sufficient. However, their effectiveness depends on their correct positioning; poor positioning can ‘be somewhat of an obstruction when trying to negotiate roundabouts.’

Side guards. Side guards were perceived as ‘an absolute must, as they push cyclists away from the wheels.’ Off-road vehicles are exempt from fitting side guards because they might hinder their passage over uneven terrain. This exemption was seen as ‘well overdue a review’ as there is ‘no barrier to adapting side guards to fit these vehicles.’

Lower cabs and larger windows. Lower cabs mean that the driver’s seat is lowered and larger windscreens can be used. This improves visibility, facilitating a direct line of site between the driver and other road users. One concern raised with this was that the living space in the cab would be forfeited if cabs are lowered. One driver felt this factor would prohibit any change, explaining that ‘once your shift is over you need room to cook, sleep, dress, etc… so the taller shape cabs are probably here to stay.’ Another driver felt there could be ‘huge benefit in lowering the front of the windscreen’ but was ‘not totally convinced that lower cabs would result in fewer collisions between HGVs and cyclists’ because ‘on rural roads, lower cabs would reduce the ability of the driver to see a cyclist in good time.’

(Left) Some drivers complained of cyclists ‘getting too close to trucks without understanding the visibility limitations’. (Right) Rhia Weston (on the left) joins Cemex for a day to see things from a different perspective.

Cameras on the outside of HGVs. Some of the drivers were cautious about adding more monitoring screens in the cab, which ‘would be too much to cope with, as well as duplicating the information supplied by the mirrors.’ But one – who already had experience of using a rear view camera – said he would ‘like to have another camera fitted to the front nearside of the cab, offering a high resolution wide-angle view down the left of the vehicle.’ Jeremy Strutt, another cycing lorry driver, added: ‘I have seen this in use and, as they are mounted at cyclists’ chest height, it’s really hard to miss one on the inside of the truck.’

Audible warning signals for cyclists. Audible warnings were said to be ‘universally ignored’ and ‘lost on cyclists who wear headphones’, therefore wouldn’t provide an additional safety benefit. It was pointed out that ‘the problem is getting truckers to use their warning signals or indicators.’ Audible in-cab warnings, however, got the thumbs up from the drivers, as long as they are reliable and affordable. ‘Audible warnings such as reversing beepers are universally ignored,’ said Clive Matthews, ‘and this is probably a good thing, or drivers might rely on them.’

Restricted routes and hours. Adding more restrictions on drivers’ routes and hours was not seen as feasible. Restrictions on hours were seen as excessive and hard to comply with, as they would squeeze the delivery window. ‘Will a small independent shop open at night to receive deliveries?’ one drive asked. It was also stressed that drivers working constant night shifts may actually make the roads more dangerous. Another said that restricted routes would mean ‘loads would have to be subdivided into smaller vehicles, which would add to the problem by increasing traffic and congestion.’

What jumped out from the interviews is that sideguards are the safety device that the drivers preferred the most, for the potential to save lives."

What jumped out from the interviews is that side guards are the safety device that the drivers preferred the most, for their potential to save lives and for the ease of retrofitting them to all trucks – as long as the exemption on off-road vehicles is lifted. There are no downsides associated with sideguards – they don’t distract the driver like audio warnings or in-cab screens; their effectiveness can’t be affected by driver error, as can occur with mirrors; and they don’t affect the driver’s wellbeing, such as might happen with lower cabs. It was also clear that drivers would be willing to undergo cycle training, particularly if smaller operators were offered financial assistance to train their drivers.

This was first published in the February / March 2015 edition of Cycling UK's Cycle magazine. 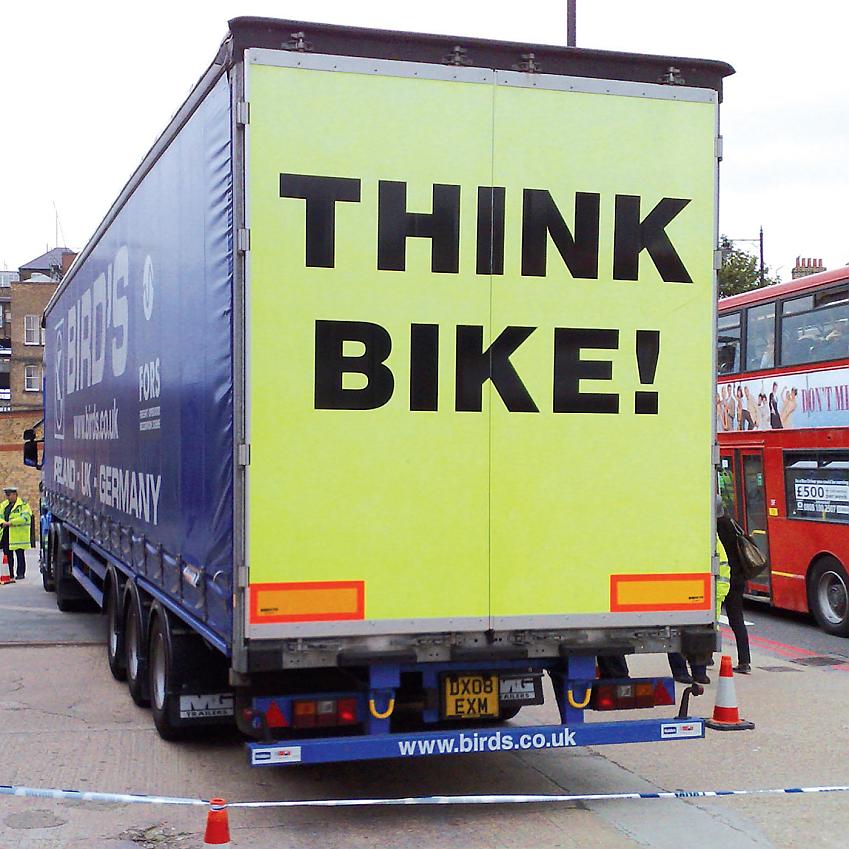