Winnats Pass is a monster of a climb, with a 20% gradient
By cotterell
Thursday, 1 August 2013

The Phil Liggett Challenge Ride on 11 August is packed with classic Peak District climbs – some of which will feature in the 2014 Tour de France. Dave Barter previews the route.

Phil Liggett is the voice of the Tour de France – among other sporting events. Listening to his genial banter, it’s hard to imagine that Phil is capable of dishing out the pain rather than commentating on it. Yet in his time he was both a racing cyclist and race organiser. As I clawed my way to the top of Winnats Pass, desperately searching the surrounding air for additional molecules of oxygen, I began to understand Phil’s pedigree. The ride that bears his name is testament to his eye for a tough event.

The route mixes it up with the very best riding the Peak District has to offer, taking in climbs that have previously hosted cycling classics such as the Milk Race."

The route mixes it up with the very best riding the Peak District has to offer, taking in a number of climbs that have previously hosted cycling classics, such as the Tour of the Peak, as well as the Milk Race. This year the event is on the 11 August, clashing with my family holiday, so I decided to head out in June for a sneak preview.

A few days previously, I’d programmed the longer route option into my GPS and taken a casual glance at the stats. I was staring at 93 miles and 9,300 feet of ascent. So it was with a certain degree of trepidation that I pedalled away from the start point at Stannington, on the edge of Sheffield. My mind was churning through strategies for tackling the likes of Holme Moss and Monsal Head, but as I reached the edge of the Damflask Reservoir my legs reminded me that there was work to be done now, never mind further up the road.

The climb up to White Lee Moor didn’t exactly break the ride in gently. There was nearly 800 feet of ascent within the first five miles of riding. I’m not sure I’d prepared myself properly for this, but tempered my moaning with the knowledge that the route has previously been completed by an 11-year-old. The surroundings were fabulous too, and the road had morphed into a well-surfaced tarmac curve devoid of traffic. I lost myself for a bit as the wheels spun me effortlessly down past Broomhead Moor and into the splendour of the Peak District scenery.

A double-chevron climb carried the scars of poor vehicle line choice and signalled a hard struggle out of the Ewden Valley. Despite being only eight miles into the ride, the climb was a real test. I imagined Liggett’s commentary following me up the hill: ‘What’s happening here? Barter’s off the back so early in the ride, mouth like a goldfish. I think he’ll be having a word with the mechanic concerning gear choice later this evening.’

He’d not have been wrong: my lowest gear of 39/29 was looking optimistic.

I fought myself back into contention, sped past the café at Langsett, and jostled with traffic on the busy A616 before the welcome respite of a turn off and long fast descent down to Holmfirth. Every inch of height gained was lost as I freewheeled into town. I was at an altitude of 495 feet and about to begin the ascent of Holme Moss, 1,719 feet at its highest point. Gulp!

This climb has made the cut for the 2014 Tour de France. It’s no stranger to the Tour of Britain or Milk Race and is often littered with grimacing amateur cyclists who’ve taken no heed of its reputation as one of England’s toughest ascents. The hill starts gently. I tapped my way out of Holmfirth, forgoing a stop at the Wrinkled Stocking Tea Room. Then I hit Holmbridge, where the gradient shoots up and stays there.

Soon there were no more gears to click into. I looked forlornly at the steep curves in the road above Holme, which beckon cyclists upwards for a mile and a half of low-cadence punishment. This message is cemented by markers painted on the road announcing the distance until summit. At the mile-and-a-quarter point, I found myself grinding into a headwind. It was grim.

Then a quarter of a mile from the top, the gradient relented slightly and allowed me a moment to enjoy the situation. At the summit, I was profoundly high, almost alone, with only sheep and the odd passing motorist to witness my achievement. I’d ridden less than a third of the Phil Liggett route yet my legs were already singing like taut harp strings.

Into the High Peak

The descent from Holme Moss to the Woodhead Reservoir must be one of the best freewheels in the UK. The road affords enough forward view to allow a decent speed, and the grassy valley wall compresses the experience to give the impression that you’re travelling faster than you are.

From Woodhead, I climbed gently and snacked. The Peak District had three more vertical treats in store before a mid-ride assault on Winnats Pass. Chunal came shortly after Glossop and seemed to take an age to get over. After a short downhill respite, Hayfield was a mocking repeat of Chunal.

I passed quickly through Chapel-en-le-Frith and was soon on another climb along Rushup Edge. On paper (or pixels), the climb was testing. Yet the road leaves town and elevates into the majesty of the High Peak. My eyes were distracted away from the road and into the depths of the scenery. Disconnection therapy served to speed me up the hill, as did a small patch of sunlight ahead. The final steep heft up to Mam Nick was followed by a wild, graceful, curving descent down into the Vale of Edale.

A few miles later, my muscles reminded me that I’d ridden nearly 50 miles and climbed a fifth of the height of Everest. I stopped at a tea-shop and shared my lunch with a bold robin in search of crumbs. Refuelled, I remounted and got cracking towards Winnats Pass. I was dreading this climb: my four previous acquaintances with it had been hard, and each time I’d arrived at it with fewer miles in the legs than now.

The foreboding began at Castleton as the road lifted gently towards the pass. A huge grassy gateway greeted me as I crossed the cattle grid past Speedwell Cavern and entered the jaws of the climb. My lowest gear was already in use before the road careered upwards, the gradient steepening beyond 20%. I was struggling and still only on the lower slopes.

As Winnats Pass continued relentlessly upwards, steepening and twisting, I dug deep – into what Phil’s co-commentator Paul Sherwen would no doubt call ‘a suitcase of courage’. It’s clearly this climb that lost Phil his friends! I’m happy to confess that I just made it, then coughed and spluttered my way down to Peak Forest, barely appreciating the solitude of Perry Dale.

The next ten miles via Miller’s Dale through to Monsal Head offered no respite. These classic Peak roads take more in ascent than they offer in descent. A further 1,300 feet of climbing were stuffed into my legs before the descent from Calver. The route flattened for a while as it followed the Derwent into Hathersage and prepared for the last long climb of the day.

As I climbed up past Bamford, skirting the Ladybower Reservoir, I worried that the preceding 80-odd miles had taken their toll. There was still 900 feet to be gained and I knew that I didn’t have another Winnats effort left. Fortunately, Phil knows his routes.

The A57 provides the ‘just enough’ challenge at the end of this ride: long, well-surfaced, and just the right gradient. I began lazily, then found a rhythm. As the road met the high moor, I was gaining speed, clearly visualising myself part of the classic races that had tackled this route before.

The ride exemplifies CTC. It brings together like-minded people to enjoy a day in the British countryside. It’s not about who wins, but who finishes with the best stories."

A short grind up a small road at Hollow Meadows saw all of the climbing done. The final few miles sped me down into Stannington along an airy ridge designed to replace memories of painful climbs with images of cycling pleasure. Freewheeling to the finish, many hours after starting, I forgot the hard work, lapped up the scenery, and nodded sagely in agreement with Phil’s event philosophy: ‘The ride exemplifies what CTC really is: an organisation which brings together like-minded people to enjoy a day in the British countryside. It’s not about who wins, but who finishes with the best stories.’

Phil’s right. This is a loop for stories and views. No rider can fail to delight in the stark hills and moors of the Peak. The tough climbs will elicit awe, bravado and possibly the click of cleats on tarmac, whilst delivering plenty of fodder for post-ride tales of rider sufferance or strength. I climbed off the bike with a real sense of accomplishment.

The Phil Liggett Challenge Ride has two route options: the longer 150km/93miles loop described here, plus a shorter option of 106km/65miles. Both routes are waymarked, so you won’t need a map or a GPS – not unless you want to compare your time up Holme Moss with that of the professionals next summer! There is full mechanical backup and there are feed stations along the route. Best of all, you’ll be riding with hundreds of others, not alone like Dave.

Centred around the Peak District and South Yorkshire. It takes in a number of classic cycling climbs such as Holme Moss, Chunal, Rushup Edge, Winnats Pass and Monsal Head.

Mixture of main and minor roads with varying surface conditions. Extremely hilly. Winnats Pass will challenge even the fittest of cyclists.

Good wet weather gear saved my day. Despite it being summer, the conditions at the top of Holme Moss were very poor. Money for a café stop proved a saving grace.

Lower gears for the ascent of Winnats Pass. Somebody to share the experience with at the top! 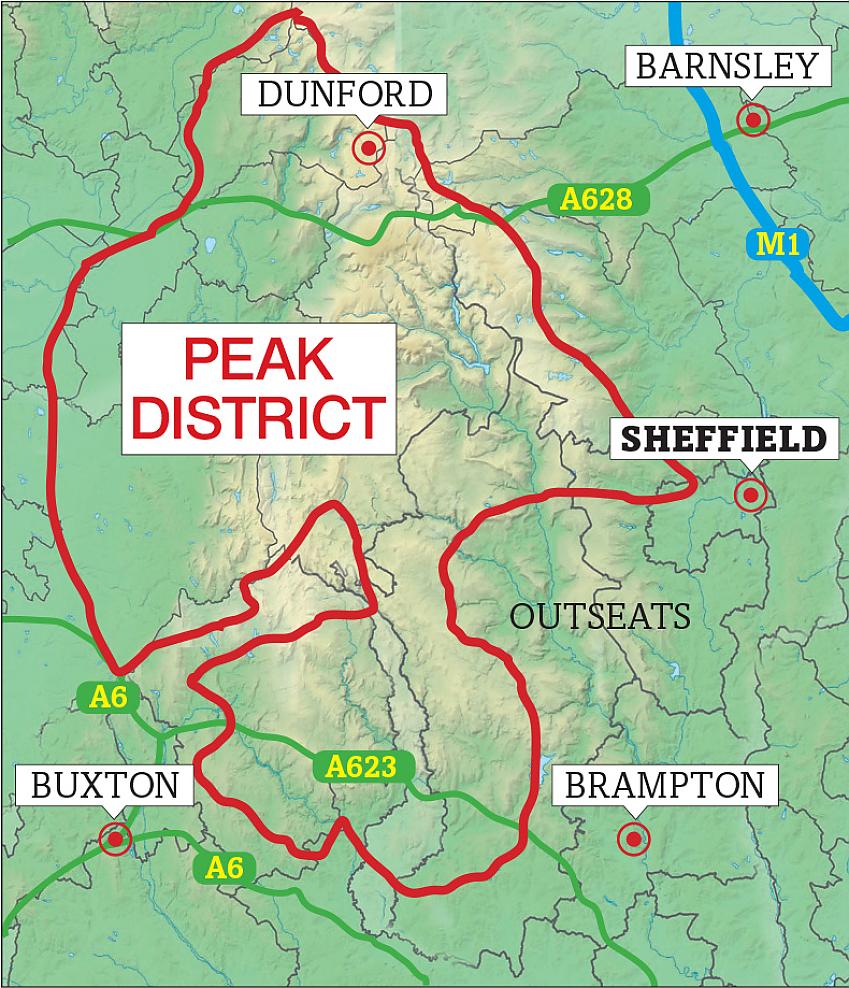