David cycled over the Rhine on his whistle-stop cycling tour
By Victoria Hazael
Tuesday, 28 June 2016

Cycling UK member David Dowling was determined to make his week off work count, embarking on a border-hopping cycle tour from the UK to Italy.

Not even halfway and it looked like my tour was over. I sat in the shade of a café in Alsace, sipping a diabolo cassis. I was more relieved than upset. The plan had been too ambitious. No wriggle room if things went wrong. I’d aimed to place a foot in as many countries as possible during my week off. Four days and five countries in, I was behind schedule, unwell, and my bike was broken…

When I was a student, I had jumped on my bike in Glasgow one summer and started riding south. My progress was halted by snow-covered roads on a col near Mont Blanc, so I just rode back again. Twenty years on, inspired by my younger self, I was thinking on the same scale. I had decided to zoom across Benelux, through north-east France and south-west Germany, and push on south to make it over the Alps into Italy – ten countries in total, including the UK.

In the red zone

I began falling behind my schedule almost the moment I rolled off the Harwich ferry at Hook of Holland. I’d had a stomach bug the week before but told myself I was feeling better. Besides, the Low Countries are, by definition, flat. My legs turned monotonously. The industrial homogeneity of the Europort in the rain quickly gave way to soothing green fields, dykes and windmills. The sun even came out.

All too quickly, little things started to unravel. The climb out of Huy, which Chris Froome made look so easy in the 2015 Tour, was a real challenge – and only the first of many. The temperature also climbed as I moved away from the sea. My carefully-programmed GPS fell victim to new road layouts, forcing me to backtrack.

Hauling myself up an incline along the Belgian border with Luxembourg, my chain broke. I removed a chewed link and re-joined it. I arrived in Luxembourg pink skinned and crusty-lipped. The receptionist in one lobby refused to speak to me until I drank the mug of water he pressed on me. Full of regret, he told me in stilted English that there was a huge military festival on and no hotel. The only room I would get would be in a ‘prostitute’ hotel. I began to explain his mistake – but he hadn’t made one. I did end up in the red-light district that night, although the bed in my shabby little hotel seemed to be intended for sleeping only.

Luxembourg, with its grand facades, magical lighting and sweeping boulevards has the feel of a fantastic toy town. I must have looked a sorry sight as I staggered out for dinner in the fairytale twilight because the working girls gave me nothing more than a sympathetic smile.

Rolling on through France, my chain was again sucked into my back wheel during a particularly weary and ham-fisted gear change. So many links were chewed now that it was pretty much beyond saving. I trudged up the hills and rolled down the other sides, my skin crisping in the sun. A hamlet with a pâtisserie appeared like a mirage. The owner was a cycle fanatic and called an English-speaking friend to give me directions to a bike shop. 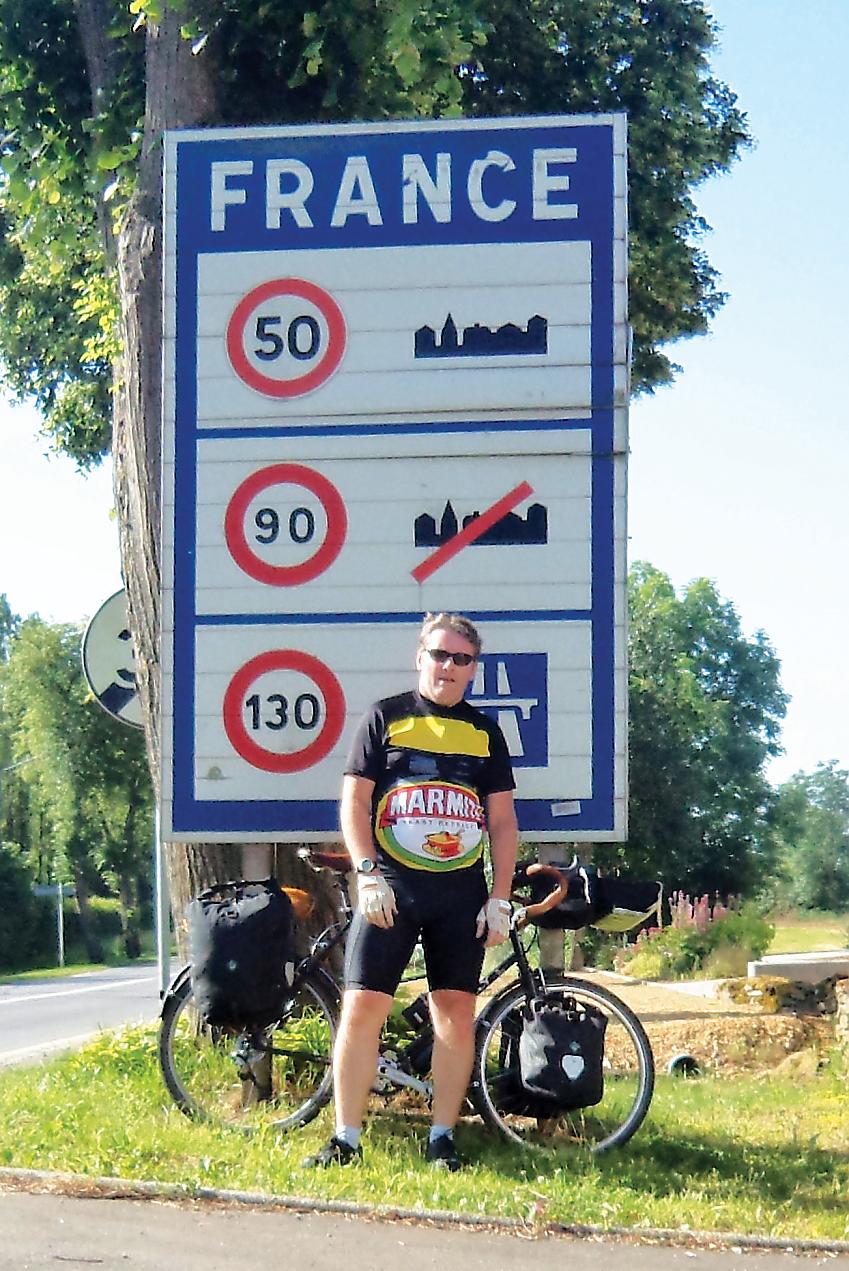 Which is why I was in the little square, sipping my drink and sheltering from the 41-degree sun. There was a bike shop there, of sorts; it specialised in agricultural hardware and mopeds. It was also closed. But as the clock struck 2pm, it opened. I rushed in and explained in garbled French what I needed. After an age of tinkering, followed by handshakes, slaps on the back and cries of ‘bon chance’, I was back on the road. Maybe I could still make it to Milan for my Sunday afternoon flight to Heathrow?

A tour that had to this point been a test of endurance began to change. I rode almost until dusk to make up for lost time. I set up camp by a lake, then watched the sun sink as I took a reinvigorating swim. I lay by my tent in the warm evening, reading my Kindle and sipping tea. This was what touring was all about. I was feeling stronger. I was beginning to enjoy myself.

Even so, I was badly behind schedule. I had failed to arrive at any of the overnight stops I’d marked in my GPS. But crossing the Rhine at Strasbourg was another boost. I was to see a fair bit of the river over the next few days.

Germany was the sixth country of the tour. The tumbledown farms of rural France gave way to villages of gingerbread houses whose dark beams contrasted with whitewashed walls, inlayed wooden shutters and window boxes. I was, for the first time, aware that I’d ridden far from home. A few tough climbs in the Black Forest brought me to the Bodensee. I followed its north-east shore for most of its length. The far side was Switzerland. To the south-east, the white-topped Alps emerged from the haze: crisp, clean, and as unexpected as a snowball on a summer’s day.

That evening, I celebrated the welcome departure of my stomach bug with a mountainous plate of steak and chips. Streetlights showed the edge of the huge lake running out of sight. The outline of the mountains was black against the starry sky, except where the moon caught the snow. With two and a half days to go, I still had over 200 miles to ride – and I still had to get over the Alps.

Now national borders rose up and fell away in quick succession. Leaving the lake behind, I picked up the Rhine once more into the mountains. The torrent of water thundering past bore no similarity to the sedate waterway I’d crossed earlier in the week. There was an excellent cycle path on its bank, and the route stuck to the valley floor as I dipped into Austria, then Lichtenstein, and further south into Switzerland. 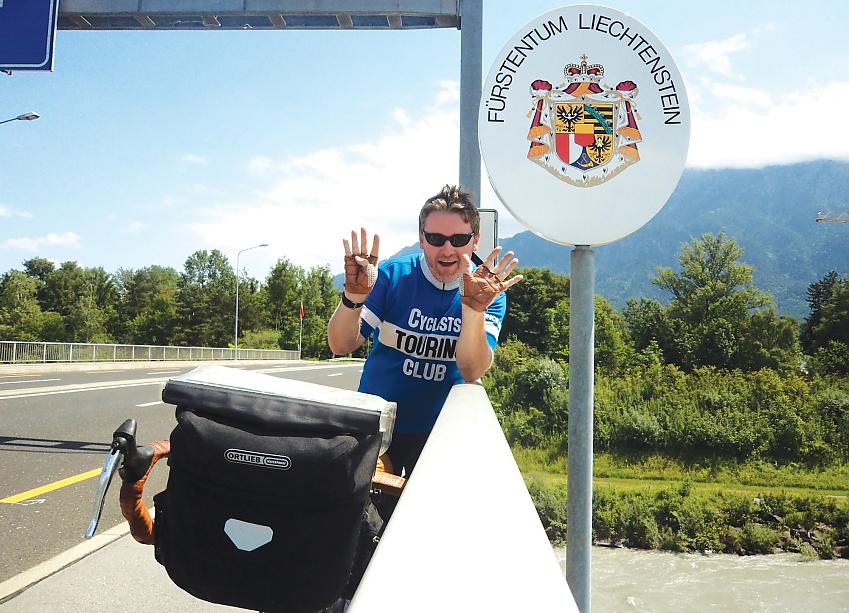 The gradient of my route began to rise. The scenery became more dramatic as the road picked its way through a series of movie-set gorges cut by the cascading water hundreds of feet below. While I was taking a breather, an Italian couple told me that this was the route the Romans took while heading north to attack the rest of Europe. We agreed that any army that could haul itself up here had earned its triumphs.

Camping above 1,000 metres was a chilly experience. I wore so many layers my sleeping bag bulged. The next morning, I had to climb the Splügenpass. The village of Splügen is set above an impressive modern dam. Yet its single cobbled street and old arching bridge feel as old as the mountains.

From here, the road snaked up the mountainside. The top of the pass is over 2,000 metres, yet the road was smooth and the climbing steady so I gradually got into the zone. There was brief relief in a hanging valley as the route passed the ski lifts. Then it hit the switchbacks that wound up the valley wall towards the pass. The previous day had been the summer solstice but there was an impressive snow bank by the road, hinting what the col must be like in winter. I pulled on what warmer layers I could and crossed my last border into Italy.

The descent was a surreal, oversized, fairground ride. Unlit tunnels left me grasping to get my sunglasses off. Emerging from the hillside seconds later, I realised I was now facing the opposite direction from when I went in. The narrow switchbacks on cliff edges needed absolute focus.

Still buzzing from the descent, I managed to make a prat of myself with the very first Italian I met. Nipping in to a café, I had a complete blank on the Italian for ‘coffee’. The good natured barista advised me that it all depended on what I liked – latte, cappuccino, espresso?

I must have been more tired than I thought. But I was content. I had completed what I had set out to do. I rode easily along the west shore of Lake Como, its mineral rich waters as light blue as the sky, the valley walls draped with rich forests. I took a final ferry across the south-western branch of the lake and found a little campsite just south of Bellagio, only a short spin from Milan and my flight home.

I fell asleep listening to the lake lapping the shore, wondering if my wife would give me a pass to do exactly the same trip again next year.

The overnight Stena Line ferry from Harwich to the Hook of Holland gets you to the start well-fed and rested for a full first day. Harwich is easy by train, although some services from Liverpool St restrict unboxed bikes. Milan has two airports and train services back to the UK. Check the carrier’s bike policy before booking. Mine was fine in a CTC bike bag.

Distance: 765 miles over eight and a half days of cycling, an average of 90 miles per day.

Route: South-east from the mouth of the Rhine, across the Low Countries and Alsace to Bodensee. Turning south at the end of the lake, up and over the Alps to reach Lake Como and on to Milan.

Conditions: The weather ranged from drizzle to extremely hot. Take enough layers to cope with extremes and check the forecast. Road surfaces were consistently excellent but make sure brakes are tip-top for the descent into Italy.

Accommodation: Campsites were plentiful and good value. A couple of city hotels put a big hole in the budget.

Maps: Garmin eTrex 30 loaded with free Openfietsmap/OSM. I took pages out of an AA Europe Road Atlas as a backup.

I'm glad a had: Kindle and LED head torch. They made evenings in the tent a pleasure without weighing down my bike. A GPS that takes standard AA batteries frees you from mains charging.

Next time I would: Ditch my front panniers and rack. They were just extra space I had to fill. I would pay more attention to elevations at the planning stage: my hardest day’s climbing was in Belgium and Luxembourg, not the Alps.