Cherbourg’s waterfront is where you can find the town’s best bars and restaurants
By cotterell
Thursday, 1 August 2013

The Petit Tour de Manche is a new coastal tour on the English and French sides of the Channel, linked by ferries. Mark Porter wrote the book on it.

The sweeping arc of Chesil Beach appeared through a gap in the morning mist as I freewheeled down from the heights of Portland Bill. On one side lay the English Channel and Fleet Lagoon, and on the other, the calm blue expanse of Weymouth harbour. The long causeway to Dorset stretched ahead, a suitably atmospheric start for a 280-mile cycling odyssey.

Once on the mainland, I followed the Rodwell Trail along the former Portland-to-Weymouth rail line. I stopped for breakfast on the quayside of Weymouth’s Old Harbour before heading over the Ridgeway, and along the new cycle path to Dorchester.

I was testing out the Petit Tour de Manche route, a new circular ride that links south west England with north west France, via the channel ports of Poole, Cherbourg, St-Malo and Weymouth. And a circuit of Jersey, if you have the time.

I was riding towards Poole through the undulating countryside so beloved of novelist Thomas Hardy: the gentle rolling hills and quiet lanes of Dorset."

With panniers packed, I headed east in the summer breeze. I was riding towards Poole through the undulating countryside so beloved of novelist Thomas Hardy: the gentle rolling hills and quiet lanes of rural Dorset (or Wessex, as Hardy called it), where the modern world is still another country.

After Dorchester, I took flat lanes past the postcard pretty villages of Moreton and Wool and on to the Saxon town of Wareham. It lies close to the rivers Piddle and Frome, the Wareham Channel and the sprawling waterways that make up Poole’s enormous harbour.

From here, some of the best riding is to be had – along pathways through heathland and heights, beaches and woods, across Rempstone Common, and directly to the Sandbanks ferry, and Poole. I diverted to Corfe Castle, lured by the promise of an early afternoon pint with my friend Adam, who helped build the route and who joined me for the day. Adam’s mountain bike was better suited to the Rempstone section than my tourer, but I had little problem negotiating the path and met large numbers of fellow cyclists along the way.

I spent a night in the old harbour area of Poole before taking the morning ferry to Cherbourg. To get the most out of the Petit Tour de Manche (PTM), I decided to take my time – partly because I was researching the guidebook to the route and partly because I like dawdling.

The PTM is one of three routes opening this summer thanks to Cycle West, a Europe-funded organisation designed to promote cross-border activity. The routes have been built, waysigned and promoted as part of a nine million Euro enterprise to draw leisure cyclists to France and the UK.

The morning ferry gets you into Cherbourg for around 1.30pm. If time permits, a night in the old port is well worthwhile: the vast maritime museum Cité de la Mer, with its decommissioned nuclear submarine, is the top attraction. I stayed on the waterfront, close to the best bars and restaurants.

The route out of Cherbourg is flat and easy. I was temporarily bamboozled by the signs at Tourlaville. Once past the imposing Chateau des Revelet, there was some moderate climbing before I found myself on quiet country lanes and, finally, on converted former rail lines (voies vertes). This wonderful network of ‘greenways’ is entirely traffic free and is either on tarmac or compacted stone and gravel, easy enough even for a road bike with the right tyres, but better suited to touring or hybrid bikes.

Bricquebec is the first town in Normandy the route passes. It was market day so I stopped off to browse while my buckled back wheel was fixed at the Peugeot cycle shop. The ruined castle at Bricquebec is spectacular and worth the minor detour from the track. The market offered everything from live cockerels to paella and car batteries, and I took a leisurely lunch outside the Hotel Donjon, with fine views of the abbey and castle.

Less than an hour after lunch, I passed St-Sauveur-le-Vicomte, where there is another ruined château. It was here I encountered a couple on a cycling holiday with their four young children, two of whom they were towing. They were planning to pitch camp at the municipal site under the walls on the château before tackling the rest of the route at an even statelier pace than me.

Beyond St-Sauveur, the Parc Naturel Des Marais stretches almost from coast to coast as far as the D-Day landing beaches near Carentan. This is a haven of wildlife, particularly birdlife, covering a vast area of the Cotentin peninsula. I am not much of a twitcher but I couldn’t help noticing the marshland birds. I stopped a the Maison du Parc, a nature museum, where I was told that the marshes here used to cut off the northern Manche area.

On my second night, I stopped just outside St-Lô, overlooking the River Vire. South of St-Lô, you pass through the Bocage area. Bocage is an admirably economical word: it means a terrain of mixed woodland and pasture, with fields and winding country lanes sunken between narrow ridges and banks, topped by tall, thick hedgerows – terrain which made for painful progress for the Allied Troops following D-Day.

The PTM follows the river on the circuitous route it has gouged through the rocky landscape, and either side are dairy farms and orchards where the cider presses still crank out Normandy’s most famous export. The Vire valley passes the rugged cluster of Ham Rocks, which rise 100m above the river. This bit of the ride is the most challenging, with a few ups and downs. Look out for the Viaduc de la Souleuvre, a ruined railway viaduct built by Gustave Eiffel and now used for bungee jumping.

Mont St-Michel is a fabulous rock-hugging architectural volcano that rises out of the sands of the Normandy coastline."

There’s a long, slow climb along the voie verte out of Vire before you hit the village of Sourdeval and then Mortain. The latter sits above the vast plains to the south, with a long descent from Mortain to St-Hilaire then Ducey. Here the bay of Mont-St-Michel opens up, and beyond it the sandy shoreline of Brittany. Mont St-Michel itself is a fabulous rock-hugging architectural volcano that rises out of the sands of the Normandy coastline. Close up it is very touristy, so I enjoyed the pilgrim magnet from a distance, before heading across the border into Brittany, along the sandy coastline towards Cancale.

The final 16km along the top of the peninsular skirts the resorts of La Guimorais and Rothéneuf. After a day of exploring the creeks and corners of the coastline, from the rocky promontory of the Pointe de Grouin to the outskirts of St-Malo, I cycled into the walled city along the seafront, just as the sun began to set over the Emerald Coast.

St-Malo’s metropolitan chic proves a splendid counterbalance to the rustic charms of Normandy. There’s a couple of options in terms of the ferry back: direct to the mainland or via Jersey, the biggest of the Channel Islands. Circumnavigating Jersey from St Helier is a 37 mile trip, and St Helier feels like it was frozen in time from the 1950s.

Any time, but best in good weather.

My lightweight laptop, a corkscrew, a small chainring, and a Kindle for guidebooks and general reading.

A dynamo for recharging my iPhone’s rubbish battery. 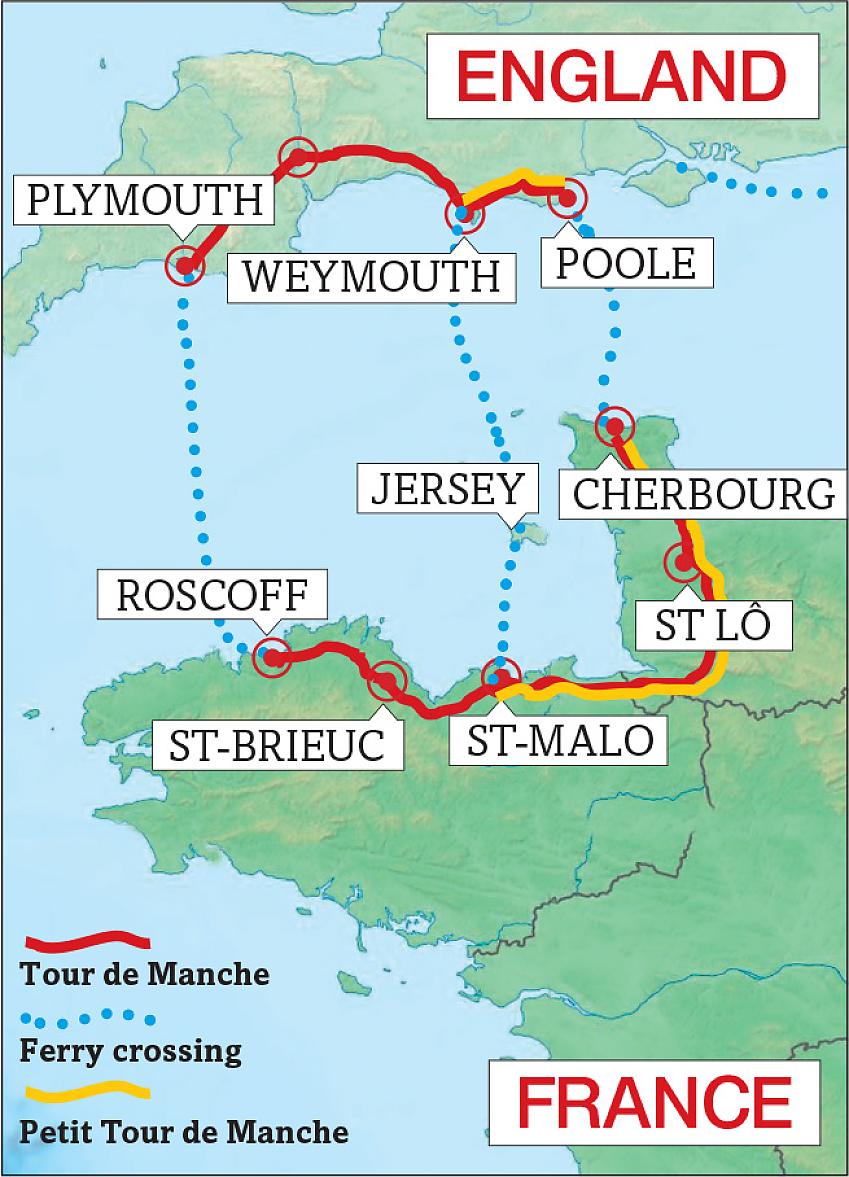