Family cyclists face hurdles when travelling by train, but with preparation and patience it’s feasible to take young children, bikes, trailers, seats and luggage with you. Cycling UK members Jeremy and Louise Clines explain how their family travels with their bikes by train.

Whistle. Beeps. Doors shut. The train glides out of Leicester station. We count and smile. We count to be sure everything’s with us: pairs of panniers, red, yellow, and orange; our bike trailer and its 90-litre green camping-kit bag; two kids’ bikes; two adult bikes; two bike seats; a three-year-old; a five-year-old; two grown-ups; two white bunnies; and a toy car – all heading home for Sheffield.

We smile, hearts still racing, because beyond the physical achievement, getting all this on a train begs many questions. Will our booked bike spaces be empty? Will station or train staff ask us what we’re doing? Will other passengers block our way? Will one of the children need the toilet? Will the train be late and make us miss our connection? Will there be a last-minute platform change?

Despite these challenges, we put our family and bikes on trains again and again – 37 times in the last year.

The challenge of using trains with multiple bikes makes us a rare species. However, we believe British train operators are making it easier, year on year, for our kind of holidaying to work. Perhaps it’s the National Cycle-Rail Awards? We are finding more and more train staff are eager to accommodate bikes, and we’re enjoying using new or refurbished trains with improved spaces, including on Scotrail, Northern, Transpennine and First Great Western services.

Pre-children, we took our bikes on trains as a matter of course, often not bothering to reserve a space, happy to wait for the next train if necessary. Once our daughter Esther was born, we decided to see if it was possible to continue our car-free life. Did having a baby mean we must get a car? Many friends seemed to think so.

We bought a Chariot cycle trailer and started putting that on trains too. After a couple of comments like, ‘I’ll let you on just this once,’ from train staff, we discovered that fully collapsing the trailer on the platform with wheels popped off meant the Chariot became ordinary (although big) luggage: problem solved. We kept Esther close in the sling when getting on and off, so we had hands free and knew exactly where she was.

We tried a camping tour where we moved on 16 times in 22 days – it was featured in Cycle Magazine, Aug-Sep 2011 – but decided that frequent packing and unpacking was too time-consuming with a young child. So we chose to let trains get us to our destination and then use our bikes for day-trips without luggage. We wanted a more typical family holiday, but without the car.

Then our son Nathaniel was born and we carried on, finding we could still get aboard. There was a year of them both in the trailer. Soon after, we found that adding child-seats gave the children better views, while the trailer remained the comfiest spot for naps or when it was raining. Everything still fitted into the cycle spaces, although the child-seats sometimes needed taking off quickly. Once we left one on a train. 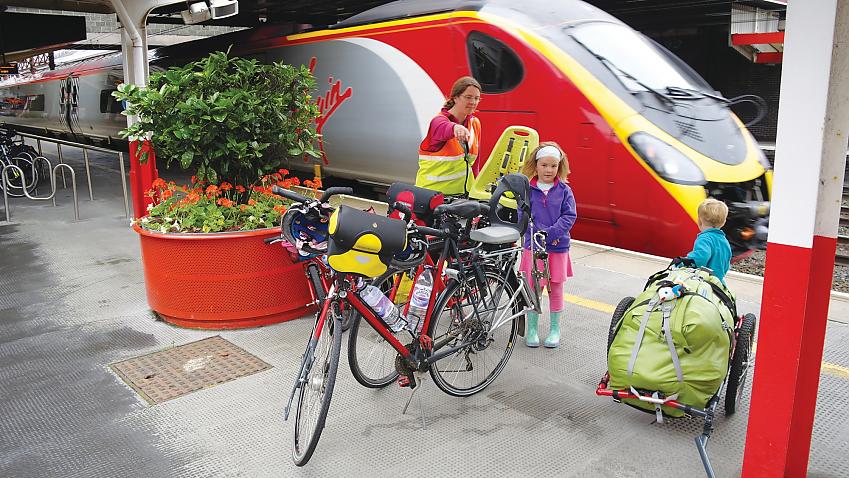 As Esther grew older, we hung her balance bike on the back of the trailer. Esther’s next bike was an Islabikes Cnoc 14in, which connected to one of ours via a FollowMe tandem. Reading Cycle’s FollowMe review was a breakthrough moment for us, since tandems don’t fit on most trains. And while our children love riding solo, we do sometimes need to ride tandem-style for speed and safety. Nathaniel inherited the balance bike. It was a small car-load of equipment but it could still fit on trains. We found the key was to get the constituent parts on and off quickly and then stow them neatly.

Aged three, Nathaniel learned to pedal the 14in bike and Esther progressed to a Beinn 20in. We bought a second FollowMe and replaced the out-grown Chariot with a custom-designed folding trailer to hold 25kg of camping gear. The bike seats still provide the chance for snacks, chilling-out, and opting-out, while we keep moving.

That the children can now wheel their own bikes through the stations is a massive help, as is the fact that they are so familiar with this type of travel and understand what’s going on. We’re careful in all the comings and goings that someone is always where the children are – whether on or off the train! Nonetheless, our arrival at station does tend to turn heads. We wonder how it will be when the children have bigger bikes. 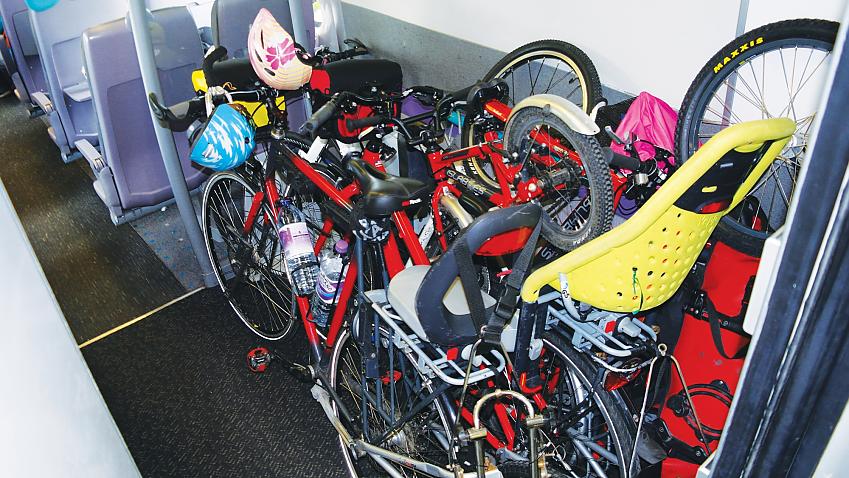 Our final journey of summer 2015 saw us at Leicester station. Generally, we find it’s best to remain with bikes loaded until we get to just the right spot. Then it’s time to dismantle super fast. This time, however, we unloaded early since we were firmly assured: ‘A five-car train, bikes at the front, always stops here.’ Panic set in as the auto-announcer said, ‘made up of seven cars’. We frantically scanned down the track. We counted seven carriages. Now we had to get the four of us and all the pile of things the length of two carriages to the correct door. A hasty, ‘Grab your bikes, quick, go that way,’ to the children whilst we hung panniers back on, followed by a dash, had our blood pumping.

The platform staff helped but we still had to follow our system; we’d been in a muddle in this kind of train’s bike space before. "No, Esther’s bike on first. Then Jem’s backwards. Then Louise’s forwards. Nathaniel’s up top on the luggage rack." We threw the panniers on, then the trailer and stacked it all before the train was ready to leave.

"You lot could set a world record," the train manager remarked. "I’ve never seen anyone get on so fast with that much stuff.’"

"It’s all the practice!" we smiled.

Getting on board where the train starts its journey is always a treat, especially if the train is at the station and ready to board ten minutes before it leaves. Similarly, alighting at the terminating station takes away some of the stress of doing things in a hurry. We’ll often check if this is an option when planning a journey.

We have become not quite train spotters but train-bike-space spotters. We have sometimes jumped on and off a train we are not travelling on, just to check out an unfamiliar bike-space for a future journey. A typical conversation en-route to the station goes something like this:

L: "What kind of bike space will it be?"

L: "Is that one of those horrible, hang-up-your-bike-by-the-wheel-after-wrestling-it-through-a-narrow-gap ones?

J: "No, that’s a Cross Country Voyager. This has a big you-don’t-even-need-to-take-off-your-panniers space."

We’ve always managed to get on the train we planned to catch, but we’ve had to be cheerful, assertive and speedy to claim our bike spaces. Staying calm, politely repeating ourselves, and pointing at the bike symbol usually does the trick. One time we moved a small group from the flip-down seats to make way for our bikes, only to find them in our reserved seats once we were ready to sit down. Another difficult time for Louise was trying to move five enormous suitcases out of the cycle space whilst still holding her bike, with other passengers trying to push on the train behind her. Jeremy was on the platform with the rest of the gear and the children…

Our favourite bike spaces to use are those on the Scotrail service between Glasgow and Largs. We can even get our bikes on without unhitching the children’s bikes from the FollowMe tandems. Perfect. It’s non-reservable but there’s bags of room. We’ve seen another four bikes on those services at times, in addition to our own. Then, once at Largs, we have the pleasure of a short ferry trip (no charge for bikes) over to the Isle of Cumbrae. It’s popular with cyclists, so we blend in more than in many other contexts.

We aim to pack light but it still adds up, especially as our eldest (now five) has become adept at hiding ‘essential’ extra toys in her wellies. We adults also stow in a fair range of surprise games for long train-rides.

Then there’s the stuff that accumulates while we’re away. Alighting at Sheffield station, with its familiar fountains, we attract smiles again and we count the additions to our luggage: shells and pebbles; 50 real feathers; three toy creatures (owl, butterfly, dragonfly); an ornamental boat; kite; magazines with free figurines; two pencils; two badges; red lentils; leaflets for scrapbooking; buckets and spades; willow bows-and-arrows (two of); and a seaside body-board. 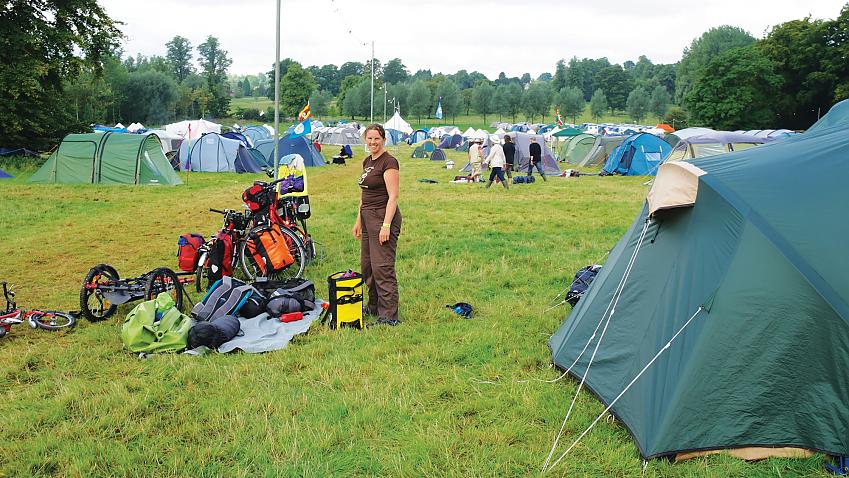 Some train operators are starting to take more than the usual two bikes per train.

Some trains do take tandems.

A small number of rush-hour trains into the largest cities don’t take bikes at all.

Cycle carriage information is now also on the National Rail Enquiries website. In the journey planner, search for train times, then click ‘details’ for your preferred journey. On the next screen, hover your cursor over the bike symbol (under ‘additional info’) to find the cycle conditions for each leg.

It’s luggage if it has up to 20in wheels and folds or will go into a small enough bag (usually 30x70x90cm in the UK).

The Carry Freedom Trailer range dismantles and packs down small.

The Radical Cyclone IV Trailer turns into a backpack:

Check out National Rail's Plus Bike website which is a one stop shop for information about combined cycle rail journeys.

Avoid tight connection times. We prefer to wait an hour rather than rush.

Few operators allow you to reserve bikes on the day of travel. ‘Unreservable’ trains can be off-putting, but some of our easiest journeys and days out happen on these.

Endeavour to join a train where it starts or finishes.

Book by phone or in person at the travel centre to coordinate cheap tickets and bike spaces.

If you can see only stairs, always check if there’s another way.

Reverse your bike into lifts: you can turn the front wheel sideways to gain room.

Find the platform staff for advice. They may need reassurance your stuff will fit.

Train companies get fined for delayed trains, so anticipate being hurried along.

Plan the sequence of how you’ll get stuff on or off.

Remember the guard’s discretion really counts. We try to be quick, keep cool and stay courteous. It helps!

A guide to taking your bike on an aeroplane View