Employers who encourage their staff to cycle reap the benefits – as do their employees. Cycling UK's Sam Jones went to work on a bike a decade ago and hasn't looked back.

Eleven years ago I began my first job that required a suit. From day one, I knew I had to find an alternative to London’s rush-hour scrum on the tube – a sweaty, unpleasant journey that took half an hour door-to-door. The bus made me late. Walking took an hour. Then my flatmate suggested cycling and lent me a curiously shaped bike called a Brompton. On a folding bike my commute took 15 minutes. I smiled the whole way. I wanted one there and then. A folder would fit into our small flat and be harder to steal. Prices were high, but I found some information about the Cycle to Work scheme. A month later, I had my own Brompton.

Over the next couple of years, a shower was installed at work thanks to a Transport for London fund to encourage cycling in the capital. (In reality, it was used only by me and those colleagues who came straight off long-haul flights.) We were also provided with access to secure underground parking, including bike stands. I was spoilt. When I started looking for my next job, secure cycle parking ranked almost as highly as interest in the role. My experience isn’t unique. Employers across the UK are waking up to the benefit of not just catering for employees who already cycle but encouraging newcomers to try riding to work. Cycling UK’s briefing ‘Cycle-friendly employers and cycle commuting’ is a good starting point to understand the reasons why business should do more to encourage cycling. Some of these are purely for the benefit of the business, such as happier, healthier, more productive staff, and a reduction in travel costs – all of which will affect the bottom line positively. Others reflect on how an organisation can limit its impact on the local or wider environment – by reducing congestion, for example.

I spoke to GSK, one of the UK’s leading pharmaceutical companies. They employ 16,000 people in the UK across 18 sites, and have been pro-cycling for a couple of decades. Company policy goes beyond ‘attracting and retaining the best talent’, a statement any company might make. It addresses the practicalities of parking for such a large workforce. The company’s shift towards encouraging active travel happened in 1998, when GSK built new headquarters in Brentwood, Middlesex. Newly-introduced Government policy at the time greatly restricted parking for all new builds. This forced a rethink among management, and transport swiftly moved up the priority list as the realisation hit that staff would struggle to reach the new office. “Senior sponsorship was key,” says GSK’s UK Transport Development Manager, Catherine Warwick-Wilson. “They turned the challenge of parking allocation into an opportunity, and consequently cycling facilities were designed into our new builds.” Cynics might suggest it was Government policy that forced GSK’s hand in encouraging alternatives to driving. That might be a fair assessment if GSK had provided secure cycle parking, lockers, changing facilities, and showers at only one site. They didn’t.

GSK staff who enrol on the Bike Miles incentive receive £1 per day for cycling to work.

There are now five sites covering West London, Surrey, and Hertfordshire, and five members of staff work to promote active travel and offer sustainable travel solutions for nearly 12,000 colleagues. GSK also offer a range of incentives for staff who choose cycling, beyond the customary Cycle to Work scheme. All payroll staff can enrol on the Bike Miles incentive, where they’ll receive £1 per day for cycling to work – money that can then be spent on cycling accessories and clothing. At GSK’s headquarters, there’s a loan fleet of 20 Bromptons, and even a cycle centre run by Recycle-A-Bike to keep the staff’s bikes running. It seems the staff appreciate what’s being done, with one member in GSK’s 2011 Cycling Benefits Survey saying: “As a result of the excellent support for cyclists, I now rarely drive to work. Over the last 18 months I have seen real improvements in my overall health, energy levels and resilience… and I now also enjoy cycling as a weekend pursuit. All of this benefits GSK and myself, and I’m proud  to work for such an enlightened employer.”

It isn’t just FTSE 100 companies who are investing in cycle-friendly policies. When it comes to bike-friendly employers, good things come in small and medium-sized enterprises too. A great example is Mott MacDonald, a transport planning business based in Sheffield. This employee-owned, engineering, management and development consultancy  is involved in solving some of the world’s most urgent social, environmental, and economic challenges, and closer to home has a leading role on projects such as the Northern Hub  rail programme.

“There has always been the knowledge and passion to support sustainable travel within the Sheffield office,” Transport Planner Kathryn Close told me. “This proved difficult in our former office due to premises restrictions, as we were not able to provide staff with access to secure cycle parking or adequate shower and changing facilities.” All this changed with a move last May when, according Kathryn, “The provision  of facilities for cyclists was very much at  the forefront of our minds.” Given their expertise in planning  transport for others, it’s no surprise that Mott MacDonald seem to have got it right  for their 150 staff. Secure cycle parking,  enough tools and spares to allow for basic fixes plus maintenance courses, showers, lockers, a drying room, and year-round access to Cyclescheme’s Cycle to Work are all available. Cycling employees are literally well catered for, with regular ‘cyclists’ breakfasts’ offered to those arriving by bike. While it’s important to accommodate the cycling enthusiasts, it’s just as important to provide for people new to cycling. Mott MacDonald do this by sending interested staff for Love to Ride’s urban cycling skills training. E-bike trials are available during the lunch break, to demonstrate that cycling doesn’t have to be hard work even in a hilly city like Sheffield.

"I had attempted to cycle to work previously but the hills in Sheffield put me off," said Project Manager Anneke Kellond Hallsworth. “I tested an electric bike which was on loan at the office last September and I was amazed at how effortless it made the hills. After borrowing it for a month, both myself and my husband were hooked. I now own one and cycle in most days – the commute’s much quicker and I save around £5.50 a day compared to driving.”

Companies leading the way like GSK and Mott MacDonald are the reason why Cycling UK is keen to bring our Cycle-Friendly Employer scheme to as many employers as possible. We are currently piloting it in Belfast in collaboration with Sustrans Northern Ireland. It’s already attracting a lot of interest. One of the first companies to sign up was – perhaps unsurprisingly – See.Sense, an award-winning bike light manufacturer. In addition to providing access to the Cycle to Work scheme, showers, lockers, and bike storage in spare office space, See.Sense fully embrace the social side of cycling, putting on mid-weekly rides. They even have emergency energy gels in the office. “We love cycling, and we’ve always supported biking to work,” said See.Sense’s Jemma Nimick. “It makes people feel better
and happier, it helps them save money, and it’s usually the quickest way to get to work.”

Being a cycle-friendly employer has immediate benefits both for employers and for their staff who choose to cycle. Yet many don’t. Cycling provision at work is not enough in itself to boost the flatlining percentage of those cycling to work in the UK. According to census data for both 2001 and 2011, only 2.8% of commuters cycle to work. It’s a point not lost on Catherine at GSK, where despite all the company’s efforts they’re only just bucking the national trend, with 3% of staff cycling in. Her observations will ring equally true for other parts of the country, as she sees the lack of decent infrastructure as preventing more people from trying their commute by bike: “Cycling infrastructure in outer London is lagging behind central London and needs serious attention. Reliance on cars can’t be expected to reduce without this and stronger orbital public transport connections.” Cycling UK couldn’t agree more. As well as setting up our accreditation scheme to help employers become cycle friendly, we’ll continue our campaigning to create more and safer cycling across the UK. 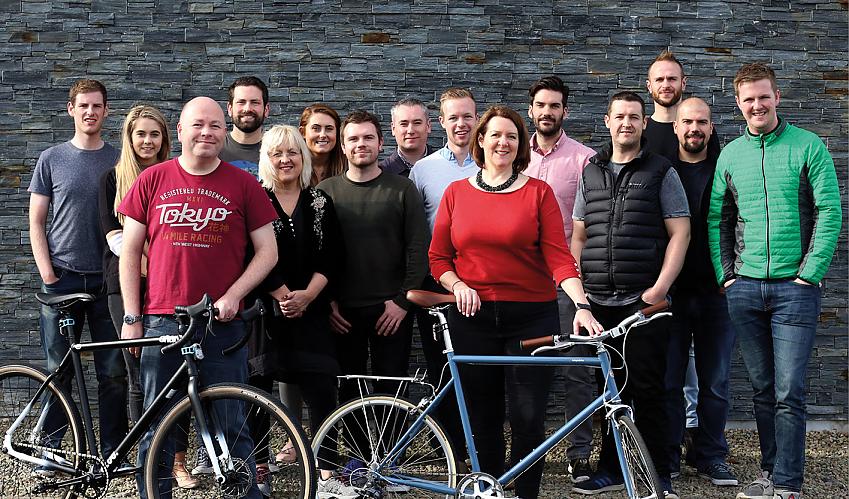 How Cycling UK can help

On 20 April this year, we launched our new Cycle-Friendly Employer Accreditation Scheme in Belfast. Currently in its pilot form, we're working with Sustrans NI and Belfast based businesses to fine-tune it ahead of a wider roll out across the UK.  The scheme was developed to provide a European standard for cycle-friendly companies. It is run by the European Cyclists’ Federation (ECF) across Europe, with Cycling UK holding the licence for delivery in the UK.  Encouraging staff to cycle to work and for business journeys helps improve staff health and can boost productivity – but it's also fun for those cycling in. Cycling UK is working on a gold standard for all employers to aim for. If you’re an employer and want to sign up for an alert when the scheme is launched in Britain,

How to be cycle friendly

It pays to cycle

Cycle commuters have long realised the savings on petrol costs or public transport fares that a commute by bike brings. Employers are now becoming aware of the financial and other benefits of supporting their staff in cycling to work. They get a fitter, healthier, happier staff, decreased absenteeism, and lower company transport costs. There’s an increasing range of off-the-shelf initiatives to help businesses encourage staff to start riding to work – or to continue doing so.

The Cycle to Work scheme provides an affordable and taxefficient means for employees to purchase a new bike and/or cycling accessories. It works through salary sacrifice: payments are spread over 12 months or more and are deducted from your salary before tax and national insurance, enabling savings of up to 39% to be made. Cycle to Work scheme providers include Cyclescheme, Cycle Solutions, Evans Cycles, and Halfords amongst others – see cycletoworkalliance.org. uk. More than 2,500 bike retailers across the UK work with these providers. Other innovative schemes, such as free2cycle.com, allow employees to earn a free bike, paid for by the employer when the employee commits to ride an agreed number of miles to work (and for leisure).

Bikeability, the new incarnation of the old Cycling Proficiency programme, is no longer the preserve of school children in playgrounds. Many councils provide adult starter or refresher Bikeability courses, either free or heavily subsidised. These courses give participants both the confidence and skills to cycle on today’s roads.

To create an environment that motivates and rewards employees who continue to cycle to work, Love to Ride offer a series of year-round local and national challenges, accessible online via an app or website. Colleagues log miles and compete against each other or against other businesses, as teams or individuals, to win prizes such as holidays or vouchers.

Keeping your employees motivated to cycle when working from home View