Near Tarbert, North Harris, on the hilly road to Stornoway

Having bought a Surly Disc Trucker during lockdown, I visited the Outer Hebrides and the Isle of Skye in August. This was my second unsupported tour, the first being during the World Cup in 1966 at the age of 13. It’s never too late!

Loaded with panniers and camping gear, I cycled to London to catch the overnight sleeper from Euston. I caught another train to Oban, then camped overnight nearby and caught the ferry to Castlebay, Barra, at the southern end of the Hebrides.

There began my two-week tour, which took in 11 islands and four more ferries. Some of the islands are connected by causeways. There is a waymarked route called the Hebridean Way (185 miles), which guides you all the way from Vatersay to the Butt of Lewis. I mainly followed this but with additional diversions, not least to the beautiful Uig Sands on Lewis. 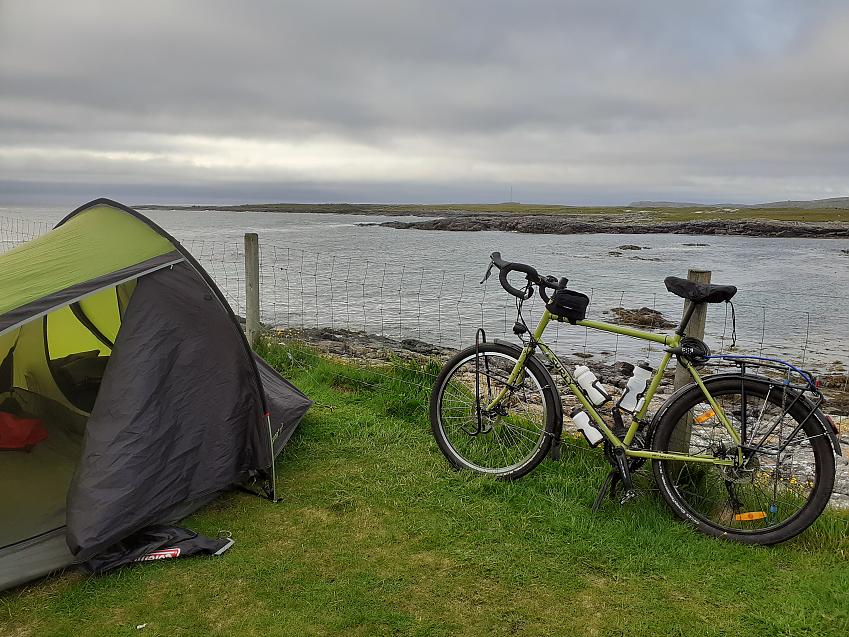 Camp site at Borve on the Isle of Barra

The islands are all different in their geography so you get a chance for some flat riding as well as some very good climbs. The scenery is breathtaking, with high hills, moorland, white sandy beaches, and many sea and freshwater lochs. The Hebrides are rich in culture too, with prehistory sites like the Callanish Standing Stones and a more recent history of fishing and blackhouses. Crofts are still worked.

After enjoying the Hebrides, I caught the ferry from Harris to Uig on Skye and spent three days cycling to Armadale in the south for the ferry to Mallaig. Skye was different again: very green and lush, but with the magnificent Cullins on view. I had my only wet day of the trip on Skye, though I had plenty of headwinds.

After 12 days on the islands, it was back to the mainland and a short train journey to Fort William, where I caught the Caledonian Sleeper south.