Five thousand kilometres into our cycle journey from Chengdu in China to Phnom Penh in Cambodia, I felt the first slow softening of one of my tyres. The rear wheel had punctured shortly after we had crossed the mighty Mekong River in the middle of Laos. Our usual policy is to find shade, prop the bike up, and pop a new inner tube in, repairing the hole later in the day.

In the next 500 kilometres, the same thing happened to the same wheel three more times. On long tours, we carry a spare folding tyre, and on the fifth puncturing I decided to find substantial shade from the fierce sun. It was time to replace the old, thin tyre. We were just half a day’s ride from the old colonial French colonial city of Kampot, famous for its fields of pepper.

It had been 38 degrees under the shade of the trees, and now we pushed our bikes back to the road in the sunshine.

Within minutes, we were the centre of attention. A boy came to watch as I removed the wheel and replaced old for new. It became obvious that he wanted to play with the old tyre. He threw it
high in the air, span it with a reverse spin on rough ground so that it returned like a boomerang, and next he was using it as a hula hoop.

We had planned to carry the tyre on to Kampot to dispose of it properly, but it was clear that the tyre had a better future than we thought. The look of pleasure on the boy’s face was one of immeasurable delight.

It had been 38 degrees under the shade of the trees, and now we pushed our bikes back to the road in the sunshine and rode on to Kampot, where we found tasty food flavoured with the eponymous pepper. In the following days, we rode on, puncture free, to the Cambodian capital. 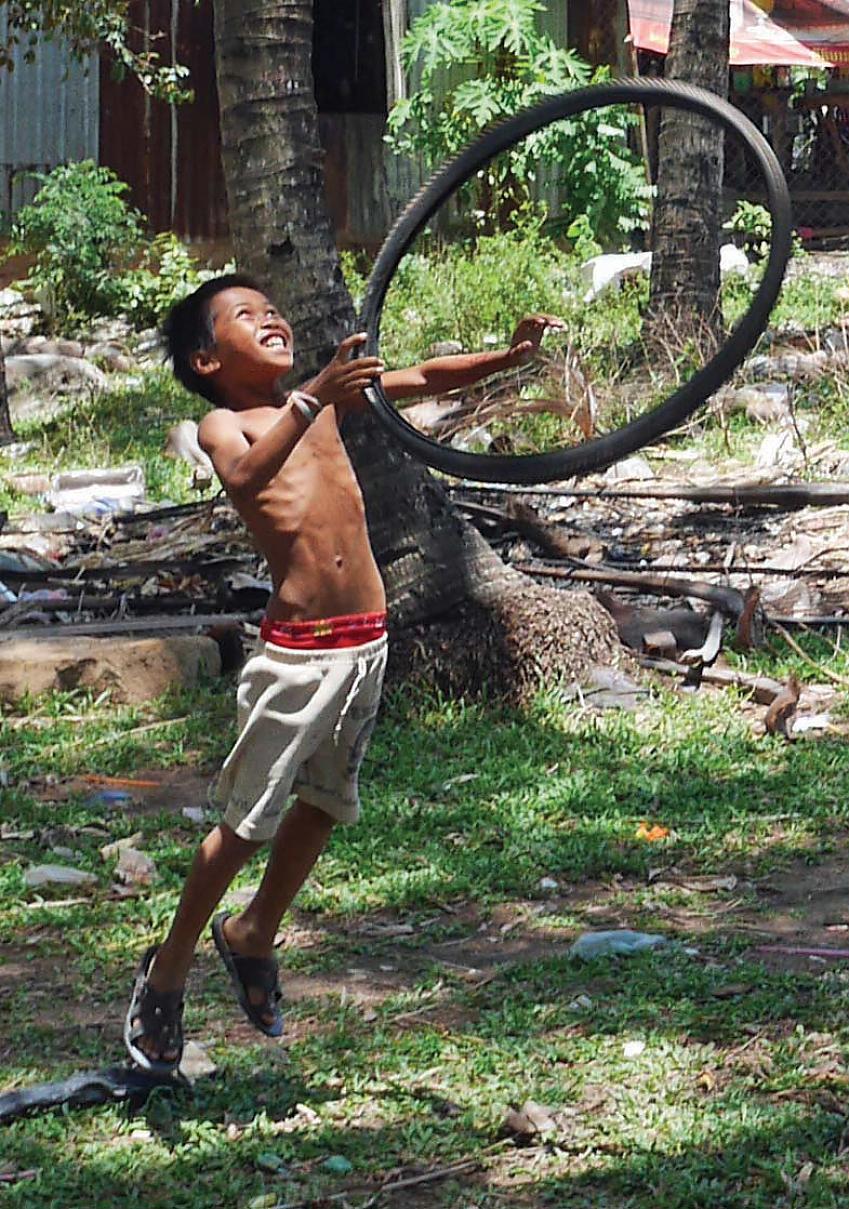 Tyre recycled as a toy

There’s more about our tour at crazyguyonabike.com/doc/FarEastTour

Travellers' Tales: Rookies ride the radweg View
You too can champion cycling in the UK
Give your support today to help Cycling UK’s charitable work tomorrow. We double every pound you give through other sources to help change lives and communities through cycling.
Volunteer now
Cycling UK continues to support the UK to cycle
This remains true during this difficult period with the ongoing threat of coronavirus Covid-19
Read our latest advice on cycling
Join Cycling UK to help us change lives and communities through cycling
Membership gives you peace of mind insurance, discounts in cycle shops, rides & routes
Join now