Dan Joyce applying power in the early part of the stroke.
By Richard Hallett
Wednesday, 28 March 2018

Efficient pedalling isn’t a matter of ‘pedalling circles’; no one really does that. So what’s the answer? Cycle magazine's technical editor Richard Hallett considers your options

On the face of it, there is, as recently-retired top British time triallist Michael Hutchinson once averred, ‘just pedalling and getting on with it.’ Propelling a cycle is simply a question of pressing down on the pedals to make progress, surely?

Well, yes: press down on the pedals and you will propel the bike forward using a motion that appears to be simplicity itself. Since a conventional bicycle’s pedals travel in a circle, the rider’s feet must do the same as they complete a pedal revolution, and it’s not immediately obvious that there’s a better or worse way to go about it.

Since the earliest days of cycling, however, commentators have espoused the idea of an ‘ideal’ pedalling action, which implies that it is possible to pedal in a less-than-ideal manner. And indeed, while the ideal pedalling action is, even today, the subject of debate, the way in which pedals might be pressed less than ideally is easy to spot.

Circular pedalling is well-adapted to harnessing human leg power. There have been countless efforts to find a more efficient drive system, many using complex linkages to produce a linear or ‘arcuate’ pedal path in the hope of finding more power or efficiency, but without success.In every arena of human-powered transport, circular pedalling has, so far, proved the most effective transmission. Nevertheless, those inventors of alternative transmissions have a point, which is that leg power is most effective when pushing the foot in a straight line away from the hip.

Inevitably, given the geometry of circular pedalling, this offers a limited window of opportunity in which force can be effectively applied to a pedal. ‘Effectively’ means applied at a tangent, or perpendicular, to the crank. Instrumented pedals constructed to measure the direction and amplitude of applied force first appeared in the late 19th century; modern versions using sophisticated electronics arrived in the early 1990s.

They make it possible to separate the tangential and radial components of pedalling: force applied at 90° to the crank arm, which contributes entirely to turning the crank and producing motive torque; and force applied radially along the length of the crank, effectively compressing or extending it. Radial force has an energy cost due to the muscle contraction that generates it but does not help to turn the pedals and therefore does nothing to propel the cycle. It is ‘ineffective’ effort. Combining radial and tangential forces produces a resultant force.

Viewed from the drive side, the pedal force ‘clock diagram’ for a typical trained cyclist shows that force is largely applied in a direct line originating from the hip. It also shows that the pedal load is tangential at around 2 o’clock, radial at around 7 o’clock, and a bit of both (in varying amounts) in between – and that maximum pedal load tends to be applied at around half-past four.

On this evidence, most cyclists tend to push hardest on the pedals once they are at or below horizontal, and therefore to expend a lot of ineffective effort. It’s not quite that simple; the pedal load can be further broken down into muscular and fundamental components, the latter caused by the inertia of the limbs as the pedals rotate, but there is a progressively smaller tangential component as the pedal descends past horizontal.

The aim of the various actions touted as contributing to the supposedly ideal action is generally either to increase the tangential component of the rider’s pedal stroke or to make greater use of muscles felt to be under-employed, the hope presumably being either to make cycling easier or to find a bit more power.

Of these actions, perhaps the most venerable is the practice of ‘ankling’, which has been promoted as desirable since the dawn of cycling. To accomplish this, the foot must go from a heel-down to toe-down orientation relative to the lower leg, or ‘plantar flex’, as the pedal descends. This requires a powerful contraction of the calf muscle, especially during hard pedalling.

Video analysis of competition cyclists shows that pronounced ankling is rare to the point of non-existence, but while there’s almost certainly no point in trying to acquire an exaggerated ankling action, there is an interesting point: trained cyclists ride with the ball of the foot roughly over the pedal axle despite the energy cost from calf muscle contraction, which could be avoided by riding with the foot instep over the axle, suggesting that ankle flexion of some sort has a significant role to play in effective pedalling.

Second only to ankling as a cycling panacea, the act of pulling up – doing positive work to pull the rising pedal upwards – has been largely debunked by power measuring devices, which show that even elite racing cyclists don’t do it except in specific circumstances such as sprinting and hard-effort climbing.

It turns out that the energy cost of pulling on the upstroke tires the muscles and reduces the power available on the down stroke by a greater amount, leaving the rider worse off. A cyclist may, however, benefit from ‘unweighting’ the rising leg by lifting the foot, while still leaving some of the weight of the rising leg to be lifted by the opposite leg pushing down.

How about dragging the foot backwards through the bottom of the stroke? It can be done, but as with pulling upwards, the energy cost outweighs any benefit. The leg muscles are not well-suited to the task, as can be seen with a simple experiment that you can try for yourself. Find a gentle up-slope with a fence or post to hold on to and, while clipped in with one leg, try setting off from stationary in a suitable gear using that leg initially stationed at various points on the pedal circle.

It is immediately apparent that you can use a lot of muscular force to no discernible effect when pulling backwards, and indeed to not much effect anywhere but in that upper-middle segment of the down stroke where pedal force is exerted most effectively.

One conclusion that might be drawn from comparing this experiment with the evidence of pedal force diagrams is that even elite cyclists simply don’t pedal in what would seem to be the most effective way, which begs the question: is it even possible to improve one’s pedalling technique and, if so, then how?

If cyclists of all abilities pedalled in much the same way, then the answer would have to be ‘no’. However, it’s possible that the elite cyclists studied so far may simply be very strong subjects who don’t pedal quite as effectively as those at the very top of the sport. Without a pedal force diagram for a typical Tour de France winner, there’s no obvious way to tell.

A good look at the Tour peloton shows that there’s plenty of variety to pedalling technique even at the summit of the sport. Some riders pedal toe-down, others with a flattish foot. Maximum leg extension varies, as do riders’ physiques.

Some features are fairly consistent, including the placement of the foot on the pedal, although this is by no means an exact science. Cycling shoes for use with clipless pedals are provided with plenty of fore-and-aft adjustment for the cleat.

Curiously, the range of movement available with mountain bike shoes is almost invariably further back on the sole than is the case with road shoes. 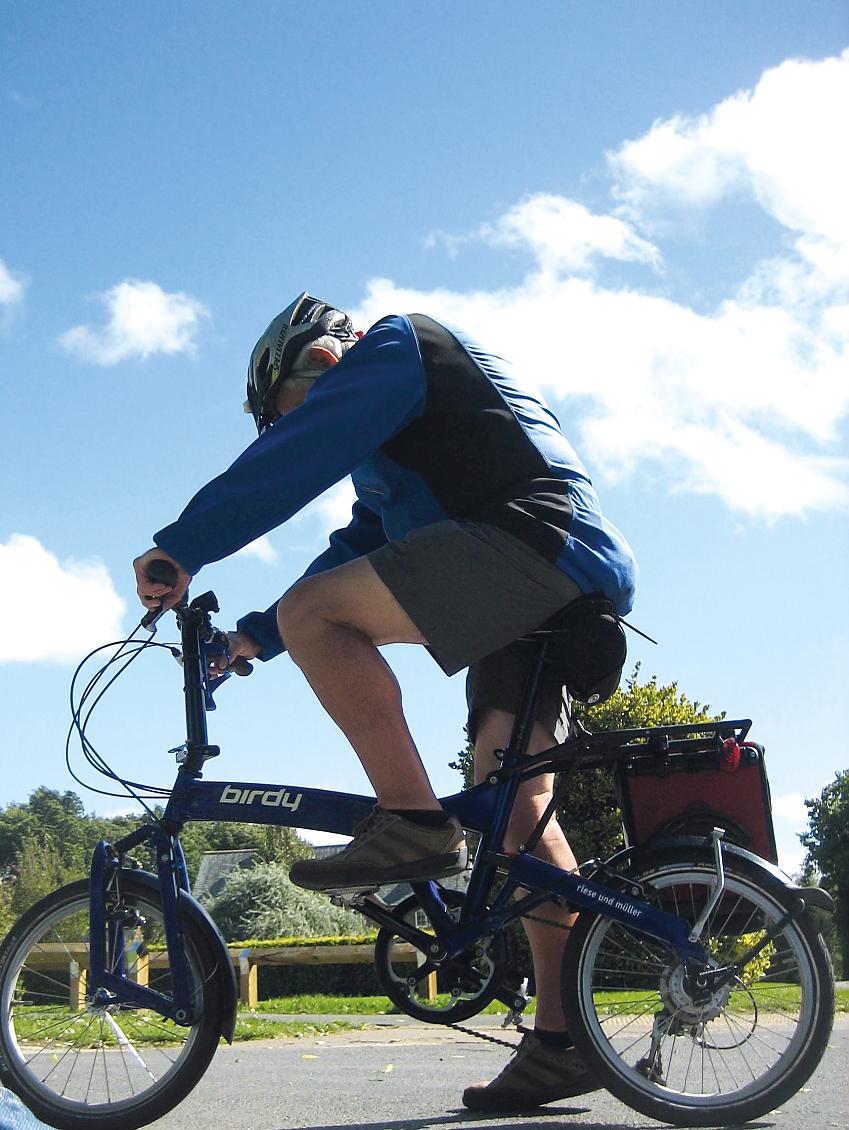 Setting off pedals at about 2 O'Clock. Photo Dan Joyce

Back, then, to the ‘ideal’ pedal stroke, which probably exists only in dreamland. Clearly, it is easy to do a lot of ineffective, or non-tangential, work when pedalling. But how much of this is inevitable?

If – and it’s a big if – there’s hope of improving pedalling effectiveness, it may lie not with attempting to apply force throughout the entire pedal circle, but rather with simply cutting back on the effort we waste.

There’s a small segment of the pedal circle where force is applied tangentially, so why not simply push harder there – early in the pedal stroke – and ease off after 4:30 to cut down on the amount of ineffective work, which carries an energy cost and adds to oxygen demand?

Ankling is tilting the foot and pedal as you turn the cranks. Exaggerated ankling is rare and there is little evidence it helps.

While basic flat pedals are fine for utility and leisure cycling, it is preferable when pedalling hard or at a high cadence to have the shoes fixed semi-permanently to the pedals. This task was, until fairly recently, performed by toe clips and toe straps, which retain a following but have been largely supplanted by ‘clipless’ pedals (which lack toe clips) and the shoes that work with them.

Essentially, there are two formats: road and mountain bike, both using the same basic concept, where a ‘cleat’ fixed to the sole of the shoe engages with a jaw mechanism in the pedal that releases the cleat on demand using a specific foot motion. Road pedals are designed to provide a large surface area for the cleat, which is attached to the sole using a three-bolt arrangement. Road shoes usually have a very stiff sole intended to maximise power transfer. The cleat sits proud of the sole, so walking in road shoes inelegant and hazardous.

MTB shoes, by contrast, can be safely used for walking or even running off the bike. Attached using a twin-bolt system, the cleat sits between two side bars, usually of rubber or some similar material, that keep it clear of the ground. MTB pedals are smaller than most road pedals and feature a ‘top and bottom’ pair of trap mechanisms for the cleat to ensure quick, reliable engagement whichever way the pedal is orientated. Single-sided versions with a ‘road’-orientated appearance are also available.

A guide to clipless pedals and cleats View

after more than forty five years of using old style toe clips and leather toe-straps, I found switching to clipless' pedals came easily (at age 62).  I'm using a pair of Shimano A520 single-sided SPD touring pedals and love em'...  I would not wish to go back to clips/straps.  They took two or three rides to get used to picking up the pedal from the opposite direction (if that makes sense), and to get used to pressing down at the right time to engage the clip. I had a couple of near-misses early on, but have not failed to un-clip or fallen off in the three years I have been using them.  I like the SPD type because they are plenty stiff enough for my purposes, mostly half day rides, and easy to walk in - I still recall the terror of coming down a flight of stairs in race shoes many years ago!

Radial force max's. out at 7 o'clock?

Good article and reinforces what seemed intuitive to me that I achieved max. power by pushing hard from 12 o'clock to 3 o'clock.  I don't  understand why the max radial force on the pedals is at 7 o'clock.  I would have thought that a straight line from the hips and through the hub and radial to the pedal arc would have been at 11 o'clock and 5 o'clock.   Any one else got any thoughts