Early-onset Alzheimer’s hasn’t stopped Peter from cycling. Dan Joyce spoke to him about his 300-mile ride on a penny-farthing in 2019

Alzheimer’s. Dementia. They’re heavy words anchored to a set of preconceptions it’s hard to shake – until you speak to Peter Berry. The 54-year-old Cycling UK member is articulate and engaging. He does public speaking. He’s physically fit. The red flag is his short-term memory. Only hours after our conversation, he’s forgotten it took place. Yet he’s far from ready to release his grip on his handlebar.

“Cycling has always been a big part of my life,” he tells me, “and it’s something I do every day. It’s something that I still can do. When I put the cycle helmet on, I become ‘Peter the cyclist’ and not ‘Peter with dementia’ – a normal guy on a bike. I leave my dementia – my dementia monster, I call it – at home.”

I can’t just sit around and do nothing. It’s important for people like me to have a purpose

Peter can no longer drive, so cycling is his independence. He lives a few miles from the nearest town, and the bus service is poor. “On a bike, you don’t have to worry about where you’re parking or where you’re going because, if you’re not really going anywhere, you can’t really get lost,” he says, matter-of-factly. “You’re just going. We have some wonderful little rural lanes around here, and there’s a great national cycle route – route one, for the coastal route.”

Following the cycle route signs helps him navigate but he admits that he gets anxious when he’s riding for any distance on his own. His solution is to cycle with a friend, Deb Bunt, who is present at the interview in case Peter needs a prompt.

“We go cycling three or four times a week, a minimum of 50 miles a day,” Peter adds. “Deb has said to me ‘You can’t give up cycling, because what will I do?’ She wouldn’t cycle where she does without me, and I wouldn’t cycle the distances I do without her. Even if we drop down the mileage, we’ll still go cycling. I can’t just sit around and do nothing. It’s important for people like me to have a purpose.”

Getting back on the bike

Peter used to run his own timber business but now, like most people with dementia, doesn’t work. Diagnosed with a progressively debilitating and ultimately terminal condition at the age of 50, he became depressed. Getting back on the bike was an important step, and he doesn’t just ride locally. In 2019 he did a coast-to-coast, from Wales to Aldeburgh in Suffolk. “I did it to show people that life wasn’t over with dementia,” he says.

In 2019 he rode 300 miles through Suffolk, Cambridgeshire, Lincolnshire, and back into Norfolk over six days. His bike of choice? A penny-farthing. “I thought that would raise the bar a bit,” he says. “Riding a penny-farthing, everybody wants to know what you’re doing because it’s different. People could donate £5 and cycle a mile, two miles, five miles, spend the day with us, or whatever. I was hoping that once people got out on their bikes, maybe in a couple of days’ time they might go cycling again. It was to inspire people.” 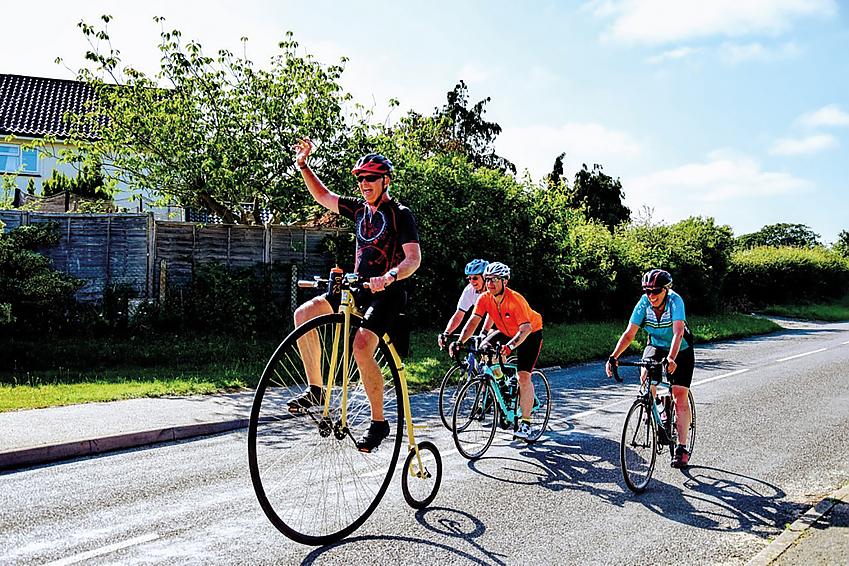 “On a bike, I leave my ‘dementia monster’ at home"

He also raised £15,000 for Young Dementia UK, a small charity that focuses specifically on early-onset Alzheimer’s. He isn’t sure exactly how the ride went (“From what I can recall, it went really well”), but it’s clear from the videos on his Facebook page that he was at home on a penny-farthing.

“When I was a teenager, I used to race penny-farthings on indoor circuits,” he explains. “There was a group of four of us who used to race in various local competitions on home-made things that we cobbled together.

“That’s over 35 years ago. I hadn’t ridden one on the roads for all those years. But as soon as I put my foot on the back step and scooted along, it was like I’d never been off one.”

In 2019, Peter took part in the Channel 4 series, The Restaurant That Makes Mistakes. “The idea was to show employers that people like me still had something to give within the workplace.” The producers recruited Peter after seeing his video blogs.