Encounters while travelling forge not just friendships, Pedr Charlesworth finds, but a cycling community – one that smiles and weeps together

My first bike tour: peering out of the plane window above Sweden, I saw pine trees stretching to the horizon. I wanted an adventurous yet cheap holiday after my first year at university, so had hastily assembled an assortment of kit, strapped it to my second-hand Raleigh, wrapped the whole thing in plastic sheeting, and headed to the airport. It wasn’t the smooth introduction to touring I’d hoped for. In ‘arrivals’ at Gothenburg airport, I discovered the gear shifters were broken. I had one gear. And my sole map of the ‘region’ contained neither Gothenburg nor its airport.

Then things began to look up. At the hostel I met an American trio celebrating their graduation by cycling from Stockholm to Paris. Already experienced tourers, they invited me along for the ‘party’. The following evening, I was ‘officially inducted’ over a can of warm beer and fresh, barbecued fish as we watched the sun set over the North Sea. A few days riding soon turned into a few weeks. Three American cyclists became three close friends. After three weeks, I waved them off from the outskirts of Amsterdam and caught a ferry back to the UK.

The welcome of strangers

Despite impressing my friends with my stories, any attempts to rally them into joining me for round two were unsuccessful.

Unlike the previous summer’s trip, this one remained a solo affair. My loneliness wasn’t lessened upon meeting groups of other tourers. Their sheets of laminated hotel names and steadfast itineraries were at odds with my haphazard approach to navigation.

Nevertheless, the tough times were outshone by beacons of light that emanated from my discovery of Warm Showers.The cyclist-specific couch-surfing site was to prove a gateway to like-minded people who were to become friends.

My first host, Maila, raced me around Malmo with her fixie crew, introducing me to the world of alley-cats and fixed-wheel crit racing. These guys and girls rode thousands of kilometres together across Europe on track bikes just to reach these races, giving them more than a few tales to tell.

Longer-term touring began to intrigue me. After university, I celebrated my first year of full-time employment by leaving full-time employment. My life was condensed into five bags fitted to my steel-framed tourer. I set off in winter, alone again, but not for long.

I constantly received welcoming invitations to come and stay. For the price of a good conversation and tired smile, I found myself staying with five hosts per week from London to Istanbul.

Slowly progressing across Europe – riding over the Juras, the Alps, and along the undulating banks of the Serbian Danube – a kindred community lay in wait. I constantly received welcoming invitations to come and stay. For the price of a good conversation and tired smile, I found myself staying with five hosts per week from London to Istanbul.

Soon I found myself intertwined in a dense web of communication, teeming with exotic names and dial codes. Through many late-night conversations and messages, a previously unknown selection of the world’s most beautiful and challenging roads was unveiled to me.

In unlikely places, long-term friendships were forged as groups coalesced and journeys continued together. We braved fierce storms on the steep slopes of the Caucuses, the blistering heat of the Uzbek desert, or simply dealt with bemused border guards.

A loaded bike on the road ahead was the trigger for instant conversation and a shared camaraderie. As my tour progressed, the same faces cropped up again and again. Personalities permeate this scene. Word spread about the man riding with just a hammock, and the Japanese guy on a folding bike.

Yet whoever I met, it wouldn’t be long before there were two words on their lips: “the Pamirs”. Followed by: “Are you riding them?” Located in Tajikistan, the Pamir mountain range and its corresponding ‘highway’ have attracted the touring community for decades.

The Pamir highway has vast plateaus over 4km high, dirt track passes scraping the clouds at 4,650m, and long stretches mere metres from Afghanistan. Last July, I found myself in the midst of these stark mountains, pushing my bike through deep sand as I began climbing out of the infamous Wakhan Valley.

On the second day, the road became ridable again. Locked into the low end of my cassette, each crank revolution was an effort to inch my loaded bike upwards. It was worth it. On the high plateau, I rode joyfully past villages visibly weathered from years of high winds and frigid winters.

Descending from it days later, breathtaking scenery flew by on all sides. I hadn’t seen a soul all afternoon. Yet, as I rounded a long right-hander, I was excited to see a chain-gang of five cyclists riding towards me. Smiling, we pulled over to the side of the road for a chat.

They were a young American couple, Lauren and Jay; a Dutch couple; and a Canadian lad. Immediately stories started flowing, and within half an hour they felt like lifelong friends. There was something strangely familiar about the group. It was only later that I recognised Jay and Lauren as the couple behind the well-known blog ‘SimplyCycling’. Their online pictures of riding through Africa had warmed me as I was fighting through the Siberian winds that engulfed Europe at the start of my own trip.

They were a humorous couple who championed the kindness of the local people they encountered. After we met in the Pamirs, we began exchanging messages for the following weeks. Then it all went quiet. 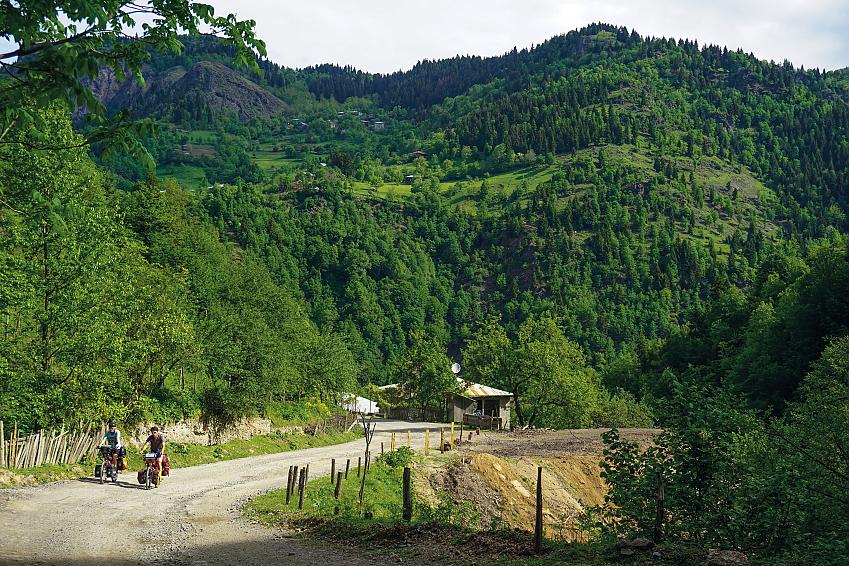 On 29 July 2018, 50 kilometres outside of Tajikistan’s capital, Dushanbe, the unthinkable happened. An ISIS car-ramming and subsequent knife attack left four cyclists dead. Among them were Jay and Lauren. I was stunned. The aftermath sent shockwaves through the cycle-touring community.

Messages of disbelief, grief,and condolences to the families began popping up on all platforms and groups around the world. Most of those cycling in the region were initially oblivious, far from a phone signal let alone the tenuous Tajik wi-fi. But word spread.

Cycle tourers are often separated by distance by definition, but we’re a community nonetheless. I added my voice to the condolences offered to the families of those affected; our thoughts are with them all.

As for the region, caution must be exercised when travelling there – just as it must before generalising about countries and their people. Tens of thousands of tourers have passed, and will continue to pass, through the Pamirs. All rave about the hospitality and kindness of the Tajik people.

Doors will always be open there to those in need, and the sadness is no doubt shared by the locals who have made the highway the friendly destination it is. Jay said “life is short and the world is big” when explaining his reasoning for setting off.

It was the same sentiment of curiosity and desire for adventure that inspired me. Tragic events sometimes bring true perspective, a realisation of the fortuity of our freedom and the true strength of our shared experiences and ideals.

Touring brings us together. That’s our cycling community – and I’m damn well part of it.

What is Warm Showers?

Warm Showers is an international hospitality exchange scheme for cycle tourers. It’s a bit like a free version of Airbnb for cyclists: no money changes hands and it’s solely for private individuals, not businesses. In joining up as a member, you agree to host touring cyclists who are passing by. They’ll subsequently host you or other touring cyclists; it’s a reciprocal agreement.

As well as your contact details, your profile shows feedback from other Warm Showers members and any criteria regarding guests staying – for example, that they have to provide sufficient notice before arriving.

When you’re travelling (or planning) you can see the locations of Warm Showers hosts as red markers on a worldwide zoomable map. Clicking on the marker lets you message the host and read their profile, to see if you’ll meet each other’s needs.

For more details, or to sign up, visit warmshowers.org