How one group is tackling knife crime in Liverpool

How one group is tackling knife crime in Liverpool

Liver Pedlaa Pool is transforming young lives across Merseyside. Julie Rand spoke to founder Blaen Roberts about how the group took off

I’ve been riding a mountain bike for longer than Blaen Roberts has been alive but I still can’t pull a wheelie. Yet perfecting this skill has led to hundreds of youngsters in the Merseyside area abandoning a life of gang culture, violence, and knives for the joy and freedom of riding bikes. They are part of a Cycling UK-affiliated group, Liver Pedlaa Pool, the ‘laa’ part being a play on words around the Scouse term for ‘lad’ or ‘mate’.

The group was founded two years ago by Cycling UK’s Young Achiever for 2019, 21-year-old Blaen Roberts, who himself was steered away from criminal activity by rediscovering cycling. Despite his youth, he has now become a mentor and father figure for many of the boys who take part in the regular rides through the city that he organises. 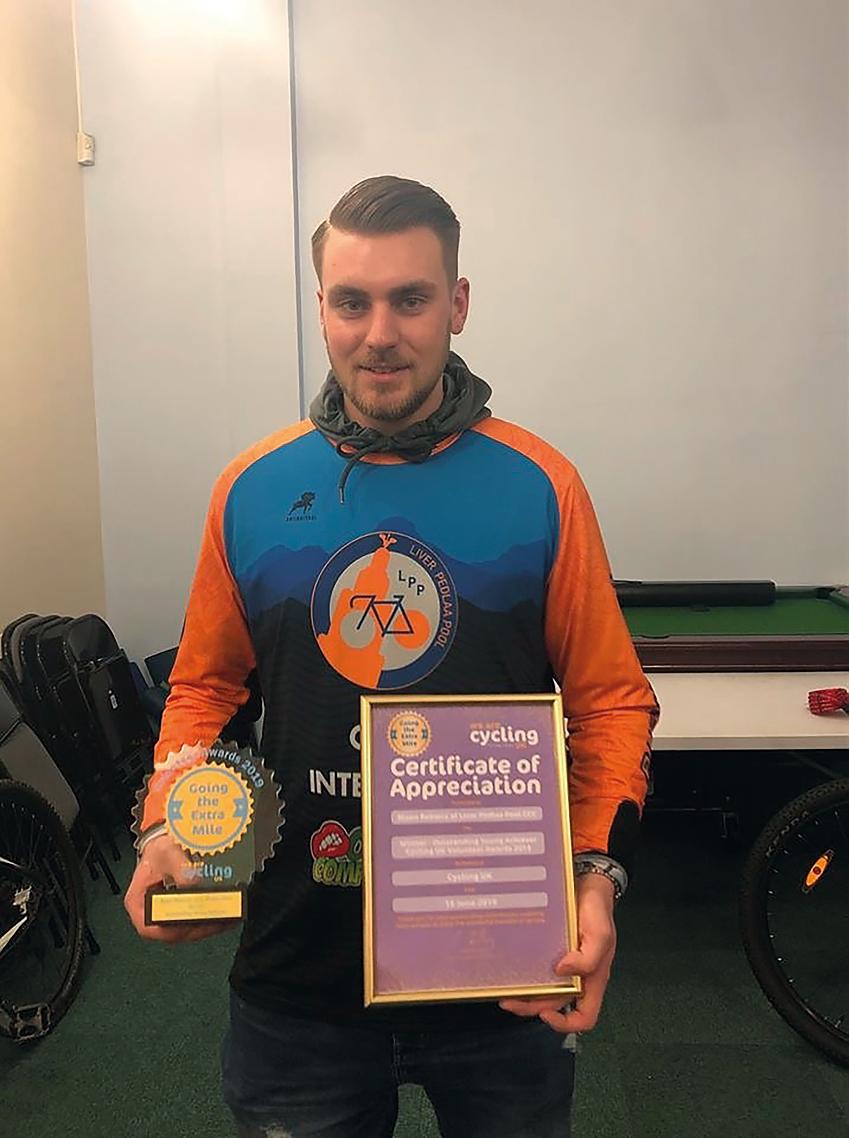 Blaen has been riding bikes since he was five. At 16, however, he moved to London to work as a DJ and found himself drifting into a gang-based lifestyle with a bleak future. A friend of his was stabbed to death. Realising that something had  to change, he moved back home and started going out on his bike again, covering 20 to 30 miles at a time. Posting these rides on social media using the hashtag #bikelife, he decided to see if he could get others to join him in using cycling as a distraction from more suspect activities.

Like the Pied Piper, Blaen soon had a huge following. In the beginning, eight riders gathered outside the Liver Building every Sunday. After a month, there were a 100. After a year, nearly 500 were turning up from all over Merseyside to take
part, including people with children in trailers and a man with a dog in a basket!

Now the mass rides, or ‘ride outs’, have grown so big they are on hold while Blaen works with Merseyside Police to set up a Safety Advisory Group so they can take place with the force’s blessing. He is also working alongside the force’s Violence Reduction Unit (VRU) as part of an initiative to combat knife crime in the area.

The group is about much more than stunts in the street, and it is remarkable what has been achieved by Blaen and Liver Pedlaa Pool in only a couple of years. As well as bike maintenance classes, he’s started a competitive mountain bike team, organises trips to bike parks and trail centres, and provides opportunities for those who don’t want to ride to develop skills such as graphic design, music and video editing, and web development. 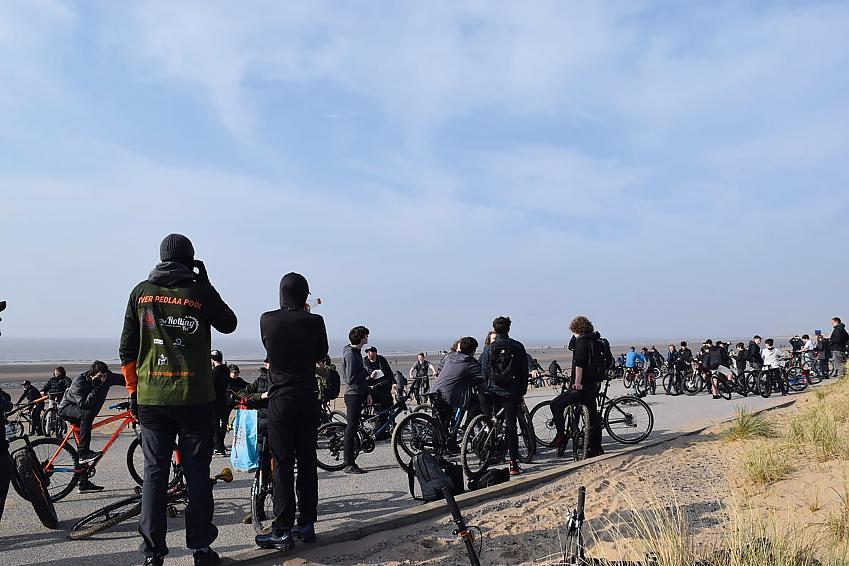 The ‘ride outs’ – like this one to Crosby – attract huge numbers

During the coronavirus crisis, he set up a community radio station to help keep the connection with the riders. He has also helped start a new project, funded by the Steve Morgan Foundation in partnership with Croxteth Family Matters, delivering essential supplies to vulnerable and isolated people in Knowsley using an e-cargo bike.

Blaen has now turned Liver Pedlaa Pool into a fully-incorporated Community Interest Company (CIC). Its projects, which run across Merseyside with the support of various charities, including Cycling UK, give young people a chance to use their skills and evade the lure of the gang culture. Those who complete a qualification in bike mechanics are able to keep the bikes – mostly donated to the project – that they have worked on.

Knives down, bikes up

Blaen’s response to critics who think it’s dangerous to have large groups of ‘scallies’ riding around the streets, pulling wheelies and other stunts, is pragmatic. “There’s been some negative comments in the past with people not understanding what’s happening. Performing wheelies is what appeals to the lads; they want to learn how to do it. Extreme sports like skateboarding are probably more dangerous.”

He believes that taking them mountain biking is also a healthy way to harness a thirst for adrenaline. For many, this might be the first opportunity they’ve ever had to leave the city and discover the thrills on offer at trail centres such as Llandegla, where they can put into practice their enviable bike handling skills.

“It’s a culture that is easy to misjudge,” he says, “but we’re diverting them from a much more harmful lifestyle and have been inspired by the #BikeStormz movement in London.” 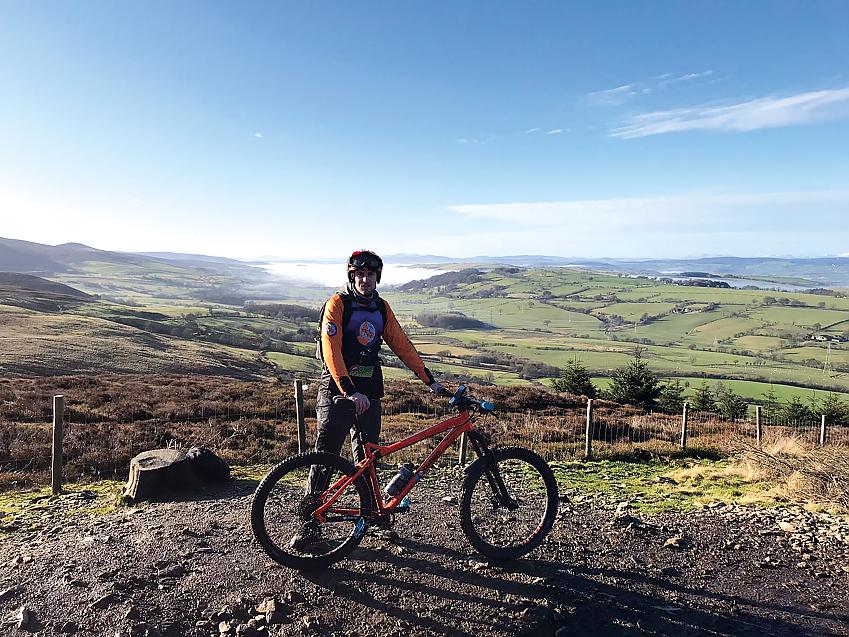 Blaen on a Liver Pedlaa Pool trip to Llandegla in January

BikeStormz holds twice-yearly ride outs backed by the police that encourage young people to put their knives down and take up cycling instead – hence the slogan and hashtag #knivesdownbikesup. Proving that Liver Pedlaa Pool is a force for good, the group has attracted sponsorship from some major bike brands. Well-known mountain bikers such as Sam Pilgrim and Olly Wilkins have also shown their support. Some of the group’s riders are even hoping to turn professional one day.

“There’s a need to intervene before boys get involved in gang culture and knife crime,” Blaen says. “Gangs are attractive because young people are looking for sources of income and role models but in Liverpool, like many big cities, there’s  a lack of opportunities so they turn to criminal activity, which is hard to get out of. There’s a hard, rough culture in some parts of Liverpool with a lot of insecurity and fear made worse by pressure from social media. Encouraging young people to go out riding bikes can help tackle these issues and make a positive change.”

Blaen, of course, is an excellent role model himself. It’s obvious watching the videos on the Liver Pedlaa Pool Facebook and YouTube pages that, as a young person himself, the riders have a lot of respect for him and listen to his instructions to stay safe and obey the law. So what did winning the Young Achiever at the Cycling UK Going the Extra Mile Volunteer Awards in 2019 mean to Blaen? “I feel very proud to have been recognised by the charity. It is a great confidence booster and has also made my family very proud.”

Blaen was nominated for the honour by Cycling UK’s former Cycling Development Officer for Merseyside, and now Training Manager (North), Chris Alston. Chris says: “Blaen’s vision has broken down barriers between young people from neighbourhoods notorious for anti-social behaviour and knife crime. His hard work and dedication are enabling them to establish new friendships, help them realise their potential and choose a more positive future.”

Volunteers’ Week takes place every year from 1-7 June. It’s a chance to celebrate those who give back to the community and highlight their contributions. As Cycle goes to press, we are not sure if our Going the Extra Mile Volunteer Awards will take place due to the restrictions imposed by the coronavirus outbreak.

However, if you know of other volunteers like Blaen who are making a difference by helping more people to cycle, please let the Volunteering Team know by emailing or contacting us via our volunteering platform, Assemble.