The ‘go anywhere’ aspect of gravel bikes very much depends on their tyres. Cycle magazine's technical editor, Richard Hallett weighs up the pros and cons of four pairs

'Gravel’ means different things to different people but it’s easy to agree on what it’s not: hard asphalt. Instead, it can be anything from the hard-packed but loose-topped surface of a Tuscan strada bianca to a muddy, horse-churned British bridleway. Gravel bike tyres are generally expected to have some road capability as well, so sections of unmade track can be incorporated into road rides – or vice versa.

This variety of surfaces a gravel bike might see makes tyre choice a trade-off. On an extended road tour with the odd excursion along a forest trail, the rider may be willing to forgo traction in mud in favour of easier pedalling on asphalt, while an entrant in a gravel enduro event might opt for something close to a mountain bike tyre.

For the purpose of this test, I also rode the circuit’s steep, rocky descent on file-treaded 650×37B tyres, which in this spring’s dry conditions were as capable as any of the tyres featured. Had it been wet, the outcome may have been very different. On grass, too, a file or smooth tread performs poorly, especially when it’s damp. 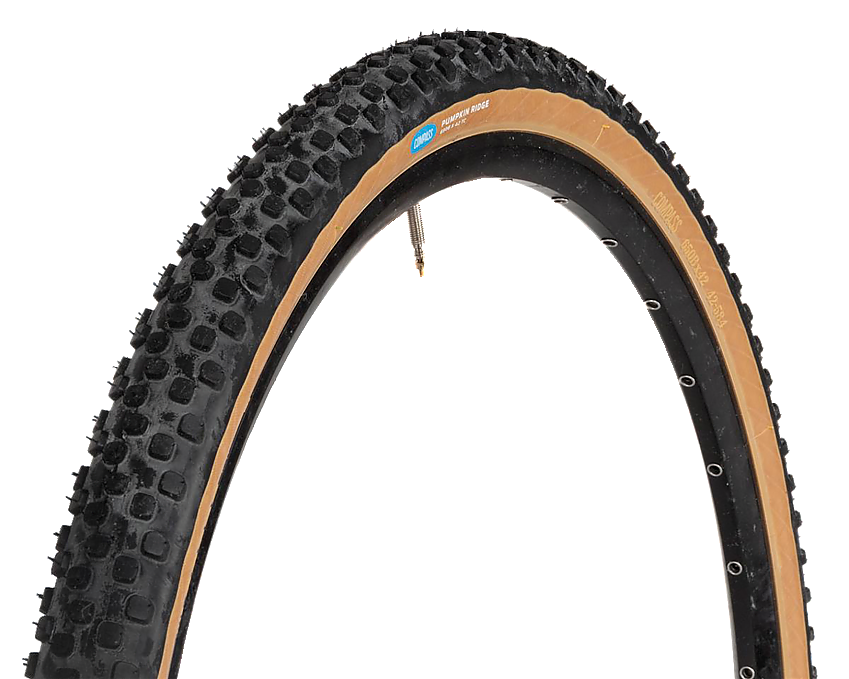 The 650×42B Pumpkin Ridge shares its big-block tread pattern with the 700×38C Stellacoom, 700×48C Hurricane Ridge, and 650×48B Juniper Ridge; they’re essentially four sizes of the same model. All are available in a lightweight version, although the 430g standard Pumpkin Ridge is already impressively light and supple. It offers impressive off-road performance in any conditions. Acceptable on-road rolling performance is accompanied by a rumbling sensation and some whine on smooth surfaces, but it’s stable at speed and when cornering. 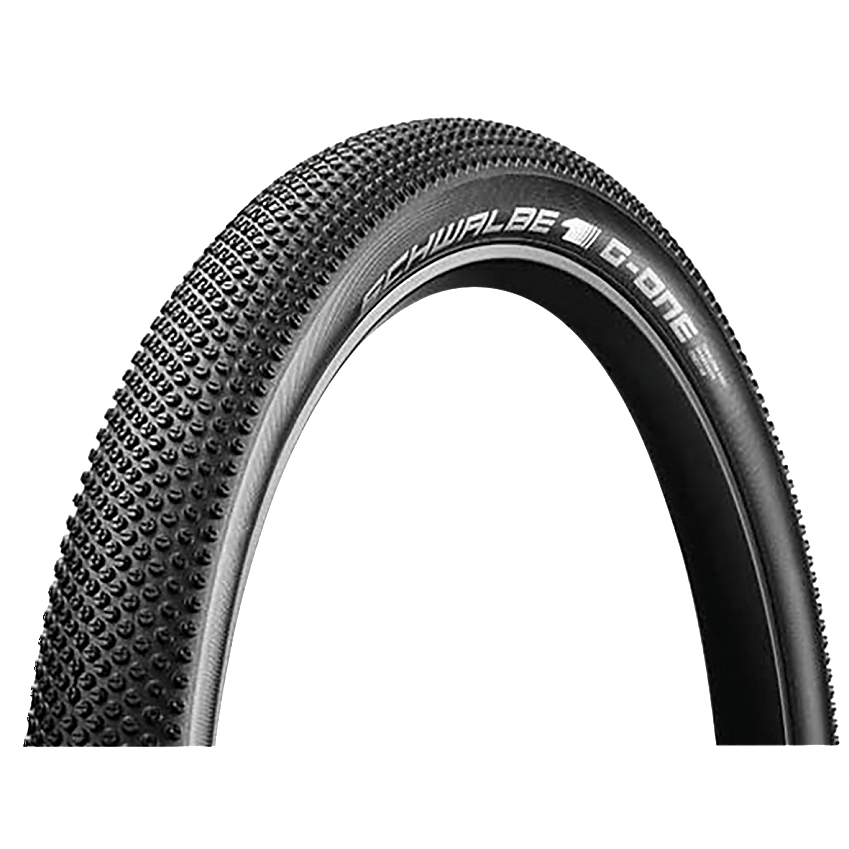 Essentially a deeper-treaded version of the Schwalbe G-One Speed, the All-Round has lots of small knobbles with a slot across the middle. They’re closely packed, with the edge knobbles buttressed against the sidewall to improve stability. While generally a tough tyre, experience with the G-One Speed suggests some susceptibility to sharp objects. On road, the All-Round rolls and grips well but with a slightly ‘wooden’, feel. It runs very nicely on dry gravel, rocks, and stones but picks up mud, grass, or moss in the wet and clogs with the former.

Impressive in the dry but with a tendency to clog up 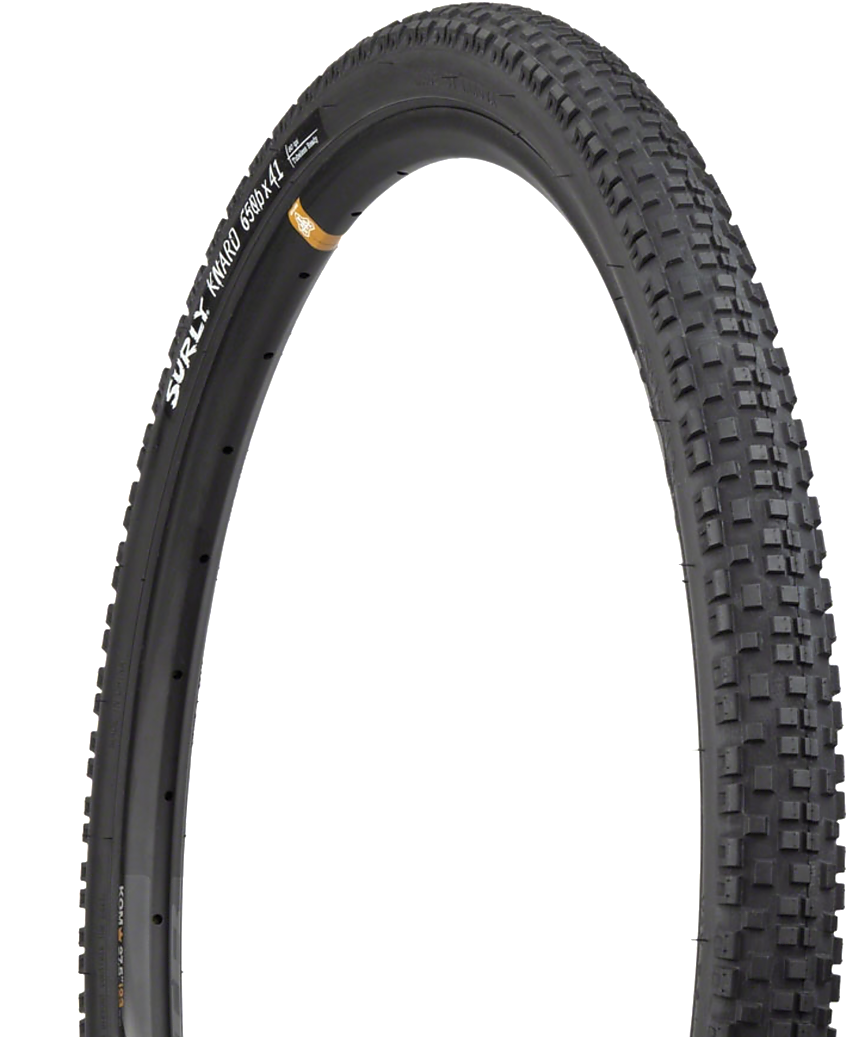 Boasting an aggressive, old-school tread pattern, Surly’s Knard is basically a dialled-back mountain bike knobbly. Not surprisingly, it’s very effective on all sorts of unmade surfaces and, thanks to the sharp edges of the widely-spaced square tread blocks, especially so when the going is slippery. Set against that, the tread causes significant squirm on asphalt and lessens cornering stability. At 510g in this 650×41B size, the Knard is no lightweight and inevitably feels sluggish on road, the surface on which it is least at home. 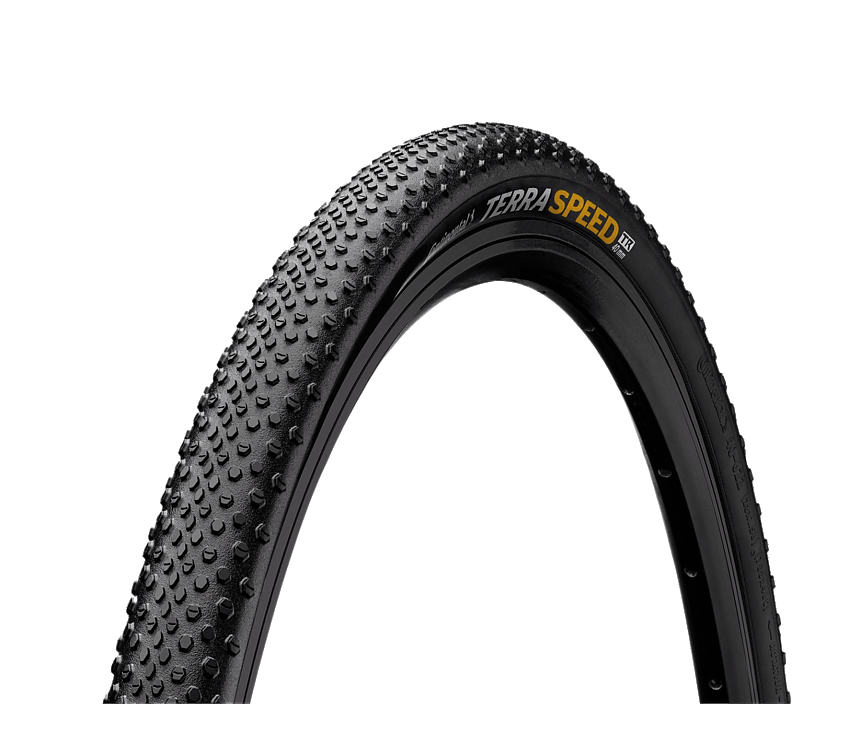 The fastest-rolling tyre on road in this test, Continental’s Terra Speed uses small, roughly hexagonal knobbles. They are larger and widely spaced over the sides but smaller and clustered more closely around the centre line. There’s a fair bit of space between them to minimise the possibility of clogging by mud, and the shallowness of the knobbles limits squirm on the road. High-speed cornering isn’t as serene as with the Pumpkin Ridge. At 400g in this size, the tyre is light and responsive, but expect rapid tread wear if using the Terra Speed for extensive road mileage.

Faster than it looks both on road and off

The four tyres on test are all-rounders that are capable on road and off, but with a bias towards the latter. This incurs a penalty on the road – just how much of one depending on the tyre’s ability elsewhere. While there are better options for road mileage with occasional careful departures from tarmac, any one of these four will offer greater grip, security, stability than a file-treaded, wide road tyre in almost any off-road situation.

While three of the group will handle extended road mileage between gravel sections, the Surly is very much a dirt tyre that can ‘do’ tarmac at a push on the way to an off-road trail.

Larger gaps and bigger tread blocks are better for mud and loose surfaces but give reduced grip, speed and stability on road. Rubber is heavy, so don’t expect a tyre with lots of large knobbles to be any kind of lightweight.

Although it is perfectly feasible to ride off-road – and especially on hardpack – on narrower tyres, 32mm is a sensible minimum width for both comfort and puncture resistance. Wider is better on both counts.

Desirable and increasingly commonplace but not relevant for many users.

More threads per inch (TPI) is better, as the carcass will be more supple, more comfortable and faster rolling.

A puncture-resistant belt or layer under the tread adds weight and stiffness; lighter tyres tend to have less protection. Using a tubeless-compatible tyre with sealant may render this largely irrelevant. Sidewall protection is useful in rocky terrain but also adds weight.

Used in all the tyres tested. Lighter and more expensive than a steel wire bead, this feature is makes it easier to carry a spare, and is obligatory in a tubeless tyre.

What are the pros and cons of tubeless tyres? View